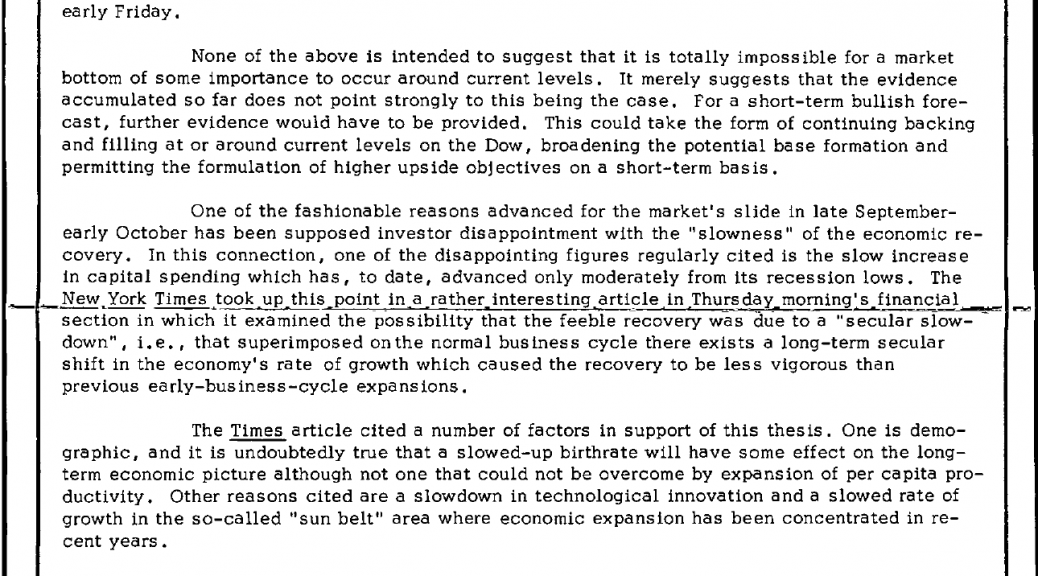 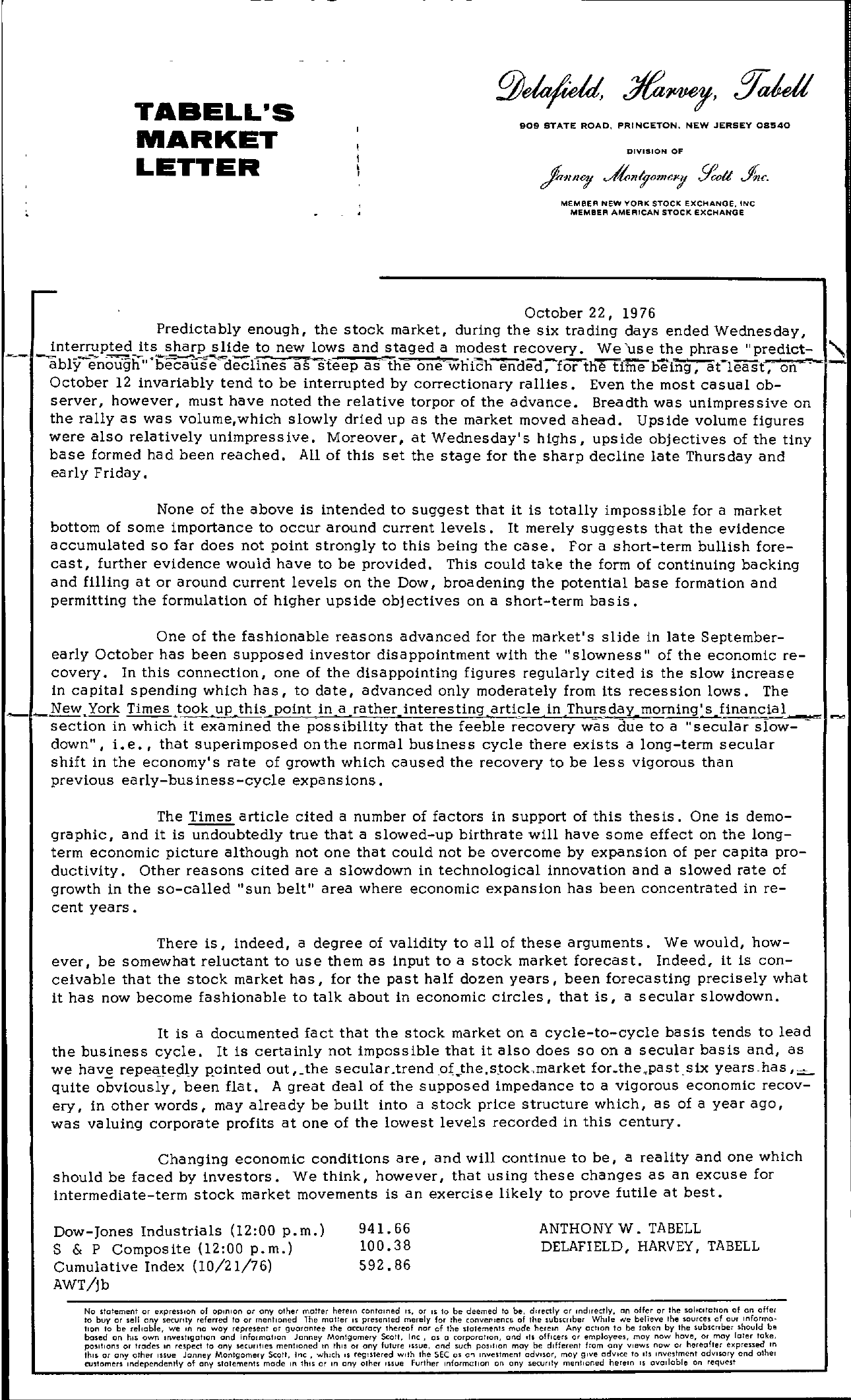 TABELL'S MARKET LETTER 909 STATE ROAD, PRINCETON, NEW JERSEY 08540 DIVISION OF MEMBER NEW VORK STOCK EXCHANGE, INC MEMBER AMERICAN STOCK eXCHANGE – October 22, 1976 Predictably enough, the stock market, during the six trading days ended Wednesday, -!nterptedJt sharp slide to new lows and staged a modest recovery. We'use the phrase predict- ably-enou'gh'becaGSecteclines as s'teep as the one'whidh endedforthe tiine being; at-least, OIl L , – October 12 invariably tend to be interrupted by correctionary rallies. Even the most casual ob- server, however, must have noted the relative torpor of the advance. Breadth was unimpressive on the rally as was volume,which slowly dried up as the market moved ahead. Upside volume figures were also relatively unimpressive. Moreover, at Wednesday's highs, upside objectives of the tiny base formed had been reached. All of this set the stage for the sharp decline late Thursday and early Friday. None of the above is intended to suggest that it is totally impossible for a market bottom of some importance to occur around current levels. It merely suggests that the evidence accumulated so far does not point strongly to this being the case. For a short-term bullish forecast, further evidence would have to be provided. This could take the form of continuing backing and filling at or around current levels on the Dow, broadening the potential base formation and permitting the formulation of higher upside objectives on a short-term basis. One of the fashionable reasons advanced for the market's slide in late Septemberearly October has been supposed investor disappointment with the slowness of the economic recovery. In this connection, one of the disappointing figures regularly cited is the slow increase in capital spending which has, to date, advanced only moderately from its recession lows. The NewJork Times took up this point in a rather interesting article in Thursday morning's financial section in which it examined the possibility that the feeble recovery was due to a secular slowdown, i.e., that superimposed onthe normal business cycle there exists a long-term secular shift in the economy's rate of growth which caused the recovery to be less vigorous than previous early-business-cycle expansions. The Times article cited a number of factors in support of this thesis. One is demographic, and it is undoubtedly true that a slowed-up birthrate will have some effect on the longterm economic picture although not one that could not be overcome by expansion of per capita productivity. Other reasons cited are a slowdown in technological innovation and a slowed rate of growth in the so-called sun belt area where economic expansion has been concentrated in recent years. There is, indeed, a degree of validity to all of these arguments. We would, however, be somewhat reluctant to use them as input to a stock market forecast. Indeed, it is conceivable that the stock market has, for the past half dozen years, been forecasting precisely what it has now become fashionable to talk about in economic circles, that is, a secular slowdown. It is a documented fact that the stock market on a cycle-to-cycle basis tends to lead the business cycle. It is certainly not impossible that it also does so on a secular basis and, as we hav repeatelly p,ointed out the secular.trend.oCthe.stock,market for.thepast.six years.has,. quite obviously, been flat. A great deal of the supposed impedance to a vigorous economic recovery, in other words, may already be built into a stock price structure which, as of a year ago, was valuing corporate profits at one of the lowest levels recorded in this century. Changing economic conditions are, and will continue to be, a reality and one which should be faced by investors. We think, however, that using these changes as an excuse for intermediate-term stock market movements is an exercise likely to prove futile at best. Dow-Jones Industrials (1200 p.m.) S & P Composite (1200 p.m.) Cumulative Index 00/21/76) AWT/jb 941. 66 100.38 592.86 ANTHONY W. TABELL DELAFIELD, HARVEY, TABELL No statement or expression of opinion or any other rnotter herem conlolned IS, or IS 10 be deemed to he, dcrectly or indirectly, on offer or thc SOIICI'ollon of on offer to buy or sell ony secUrity referred 10 or mentioned The moiler IS pre5enled merely for the (onve/'llenc!! of the subSCriber While He believe the sources of our Informe- lion 10 be relmble, we In no woy represent or guarantee the accurat)' thereof nor of the statements mude herein Any achon to be token by the subscTlber should be based on hIS own Inveshgollon and Informotlon Janney Montgomery Scott, Inc, as a corporallon, ond ,Is offIcers or employees, moy now have, or may later toke, poSItions or trades In respect 10 any s.ecuntles men,oned In thIS or any future Issue, and such posItIon may be dIfferent from any VIews now Of hereafter expressed m thIS or any other Issue Jonney Montgomery Scott, Inc, whIch IS regIstered WIth the SEC os 0'1 mvestment adVIsor, may gIve adVIce to ,ts Investment adVIsory and othel customers Independently of any statements mode In 1TllS or In any other Issue Further ,formotlon on any security mentIoned herein IS ovallable on request