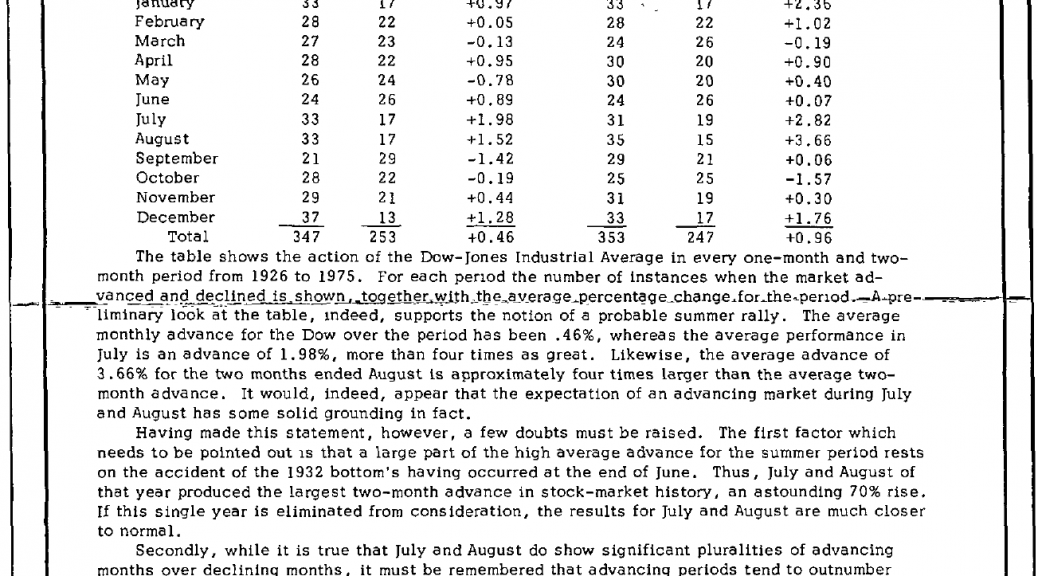 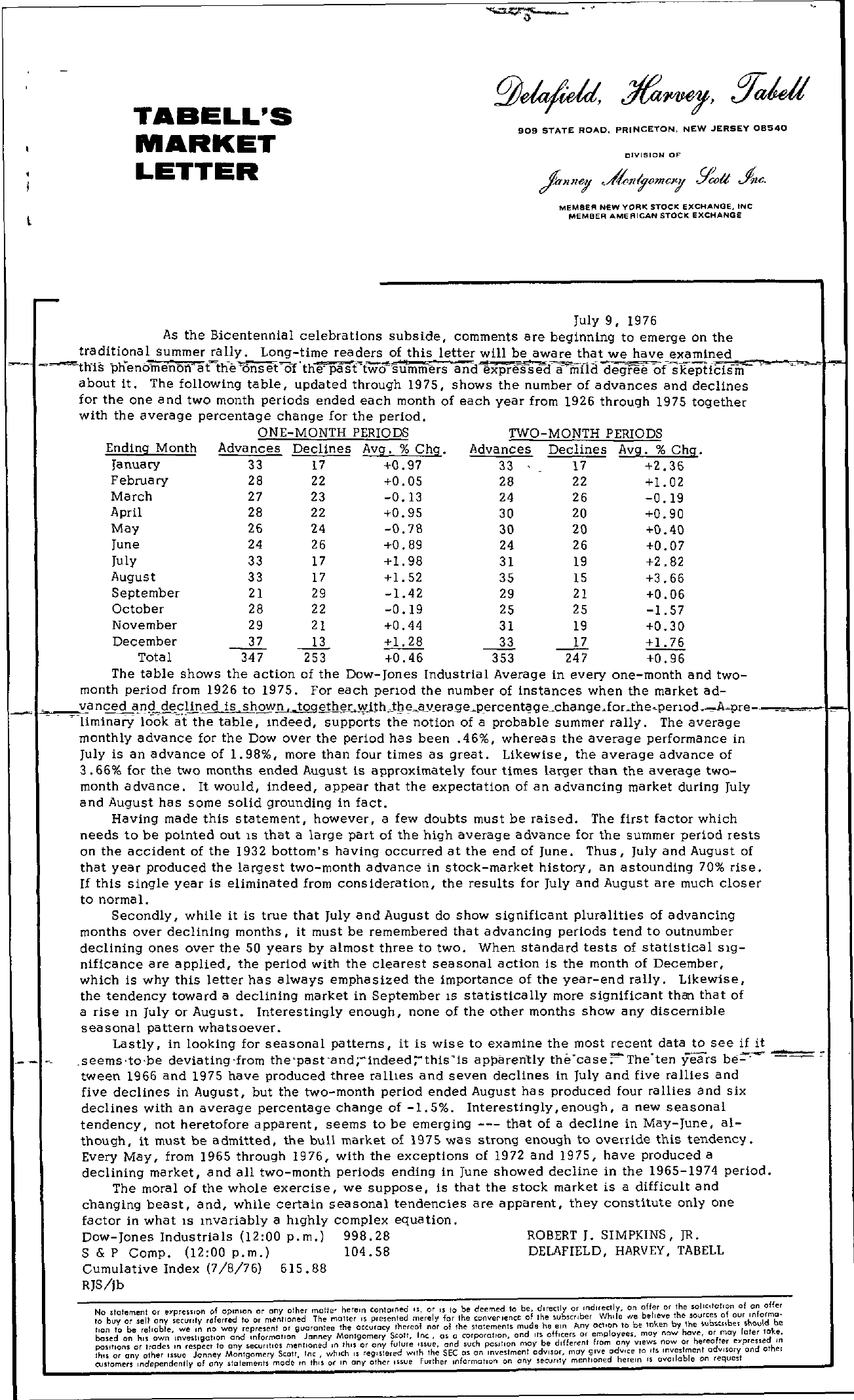 TABELL'S MARKET LETTER l 909 STATE ROAD, PRINCETON, NEW JERSEY 08540 DIVISION OF MEMBER NEW YORI( STOCK EXCHANGE, INC MEMBER AMEFtICAN STOCI( eXCHANGE – July 9, 1976 As the Bicentennial celebrations subside, comments are beginning to emerge on the –''ettrhaids iptinoennablmseu'nmotmCeartr'a'llyth.-eL6nosentg6-ft'itmhe-e readers of this le pasftwosummers tter and wexilpl rbeessaewcfaarefntfhlaatdwegerheeavoesKexeapmti;;iinedii'sin…,..,..-.-,,–J-,-1 about it. The following table, updated through 1975, shows the number of advances and declines for the one and two month periods ended each month of each year from 1926 through 1975 together with the average percentage change for the period. Ending Month january February March April May june july August September October November December Total ONE-MONTH PERIODS Advances Declines Avg. Chg. 33 17 0.97 28 22 0.05 27 23 -0.13 28 22 0.95 26 24 -0,78 24 26 0,89 33 17 1.98 33 17 1.52 21 29 -1.42 28 22 -0.19 29 21 0.44 –.E. -.-ll. 347 253 1.28 0.46 TWO-MONTH PERIODS Advances Declines Avg. Chg. 33 17 2.36 28 22 1. 02 24 26 -0,19 30 20 0.90 30 20 0.40 24 26 0.07 31 19 2.82 35 15 3.66 29 21 0,06 25 25 -1. 57 31 19 0.30 —-.ll 353 –.lZ. 247 1. 76 0,96 The table shows the action of the Dow- Jones Industrial Average in every one-month and twomonth period from 1926 to 1975. For each penod the number of instances when the market ad 1……,…vanan9 declined is showlL..1Qgether withtl;leavera,gep,ercentagechange.foLthepenod …,.A…pre-'–I-I –liminary look ';'i the table, mdeed, suppo'rts the notion of a probable summer rally. The average monthly advance for the Dow over the period has been .46, whereas the average performance in July is an advance of 1. 98, more than four times as great. Likewise, the average advance of 3.66 for the two months ended August is approximately four times larger than the average two- month advance. It would, indeed, appear that the expectation of an advancing market during July and August has some solid grounding in fact. Having made this statement, however, a few doubts must be raised. The first factor which needs to be painted out 1S that a large part of the high average advance for the summer period rests on the accident of the 1932 bottom's having occurred at the end of June. Thus, July and August of that year produced the largest two-month advance in stock-market history, an astounding 70 rise. If this single year is eliminated from consideration, the results for July and August are much closer to norma\. Secondly, while it is true that July and August do show significant pluralities of advancing months over declining months, it must be remembered that advancing periods tend to outnumber declining ones over the 50 years by almost three to two. When standard tests of statistical Slg- nificance are applied, the period with the clearest seasonal action is the month of December, which is why this letter has always emphasized the importance of the year-end rally. Likewise, the tendency toward a declining market in September IS statistically more significant than that of a rise m July or August. Interestingly enough, none of the other months show any discernible seasonal pattern whatsoever. Lastly, in looking for seasonal patterns, it is wise to examine the most recent data to see if it , .seems'tobe deviatingfrom thepastand;-indeed;–this'is apparently thecaseTheten years be- …tween 1966 and 1975 have produced three railles and seven declines in July and five rallies and five declines in August, but the two-month period ended August has produced four rallies and six declines with an average percentage change of -1.5. Interestingly, enough, a new seasonal tendency, not heretofore apparent, seems to be emerging — that of a decline in May-june, although, it must be admitted, the bull market of 1975 was strong enough to override this tendency. Every May, from 1965 through 1976, with the exceptions of 1972 and 1975, have produced a declining market, and all two-month periods ending in June showed decline in the 1965-1974 period. The moral of the whole exercise, we suppose, is that the stock market is a difficult and changing beast, and, while certain seasonal tendencies are apparent, they constitute only one factor in what lS mvariably a hlghly complex equation, Dow-Jones Industrials (1200 p,m.) 998,28 S & P Camp. (1200 p.m.) 104.58 Cumulative Index (7/8/76) 615.88 ROBERT j. SIMPKINS, jR. DELAFIELD, HARVEY, TABELL RjS/jb No talement or eypresslon of opinion or any other matte' herein contained IS, or IS to be deemed to be, directly or indirectly, on offer or the soliCItation of on oHer to bvy lion to or sell any secvnty be reliable we ,n rtferred no way 10 or mentioned The matter IS presented merely represent or guarantee the occvrocy thereof nor for of the the COnverlencc of the statements mude he svbscrlber em Any While 'ile believe action to be token bthyethSOe VfCu bSCfolfboevrr,sht nOUf\d, mkbe' based on hiS own'lnvestlgatoon positions or tfades In respect to and information Janney MonTgomery any secvrlllCS mentioned In thiS or any S,olt, fvture Inc, as a Inue, and corporallon, ond lIs officers or such pOSition moy be different employees, may from any views now now ohravhee,reoorJtmer aeyyapreert0hem, Ih,s or any other ISSUC Janney Montgomery Scott, tn whICh IS registered w,th the SEC as on Investment odvlsor, may give odvlce to ItS Invfsent visoryon e, customers Independently of any statements mode In thiS or In any other Issue Further I(.formatlon on any secuflty mentioned herein IS ovalo C on request