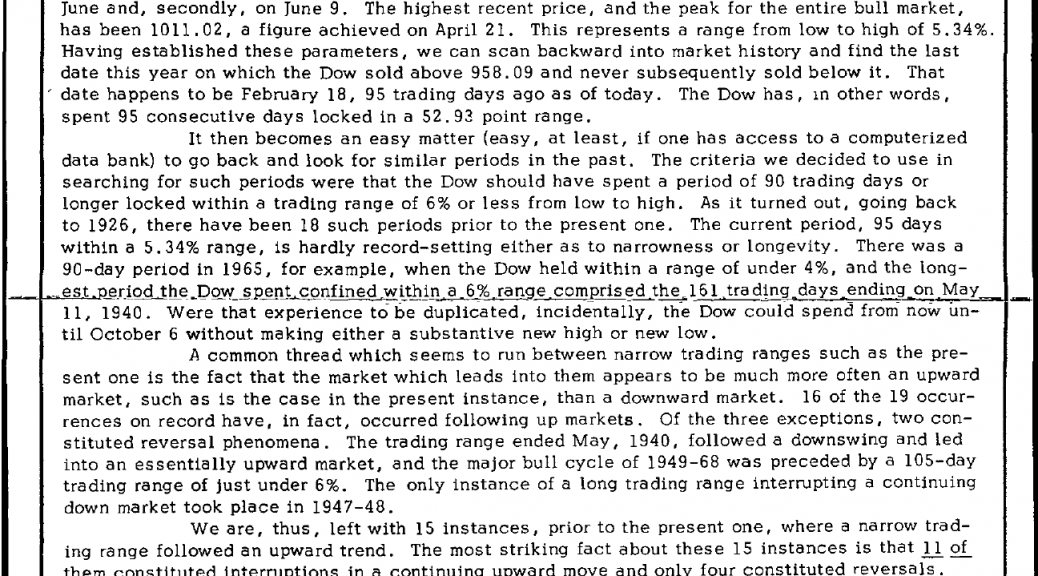 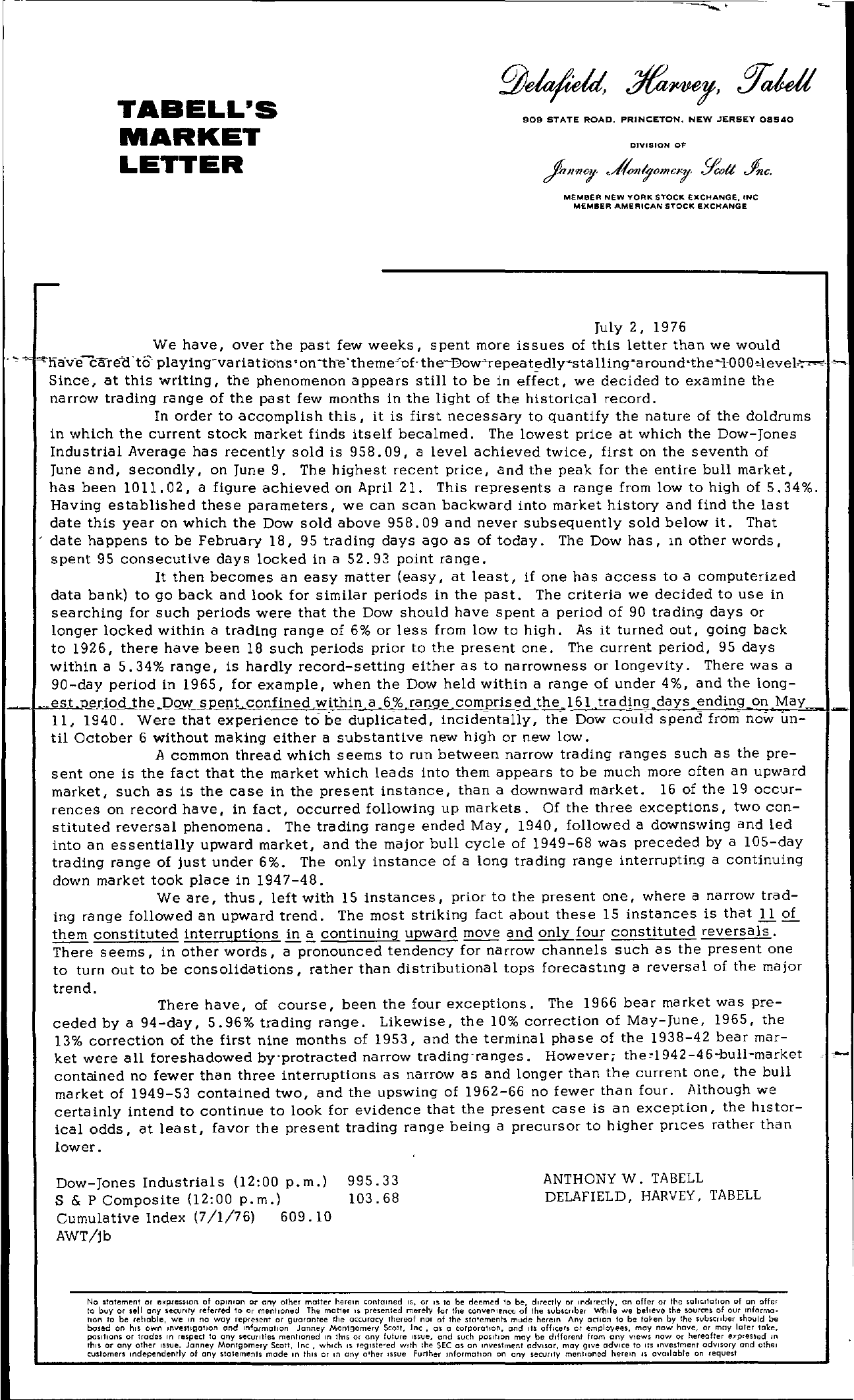 TABELL'S MARKET LETTER — 909 STATE ROAD, PRINCETON, NEW JERSEY 08540 DIVISION OF MEMBER NEW YORK STOCK eXCHANGE, INC MEMBER AMERICAN STOCK eXCKANGE July 2, 1976 We have, over the past few weeks, spent more issues of this letter than we would naVecarea to playing-variations'onth-e'themeof the-Dowrepeatedly-stallingaroundthe-OO(hleveh –, Since, at this writing, the phenomenon appears still to be in effect, we decided to examine the narrow trading range of the past few months in the light of the historical record. In order to accomplish this, it is first necessary to quantify the nature of the doldrums in which the current stock market finds itself becalmed. The lowest price at which the Dow-Jones Industrial Average has recently sold is 958.09, a level achieved twice, first on the seventh of June and, secondly, on June 9. The highest recent price, and the peak for the entire bUll market, has been 1011.02, a figure achieved on April 21. This represents a range from low to high of 5.34. Having establlshed these parameters, we can scan backward into market history and find the last date this year on which the Dow sold above 958.09 and never subsequently sold below it. That date happens to be February 18, 95 trading days ago as of today. The Dow has, In other words, spent 95 consecutive days locked in a 52.93 point range. It then becomes an easy matter (easy, at least, if one has access to a computerized data bank) to go back and look for similar periods in the past. The criteria we decided to use in searching for such periods were that the Dow should have spent a period of 90 trading days or longer locked within a trading range of 6 or less from low to high. As it turned out, going back to 1926, there have been 18 such periods prior to the present one. The current period, 95 days within as. 34 range, is hardly record-setting either as to narrowness or longevity. There was a 90-day period in 1965, for example, when the Dow held within a range of under 4, and the long1I–,est,o-e.r.iod-1e.OovLJ1enJ.corlfined within a 6 range comprisei!..t161 trading days ending On May 11, 1940. Were that experience to be duplicated, incidentally, th-e Dow could spend from now until October 6 without making either a substantive new high or new low. A common thread which seems to run between narrow trading ranges such as the present one is the fact that the market which leads into them appears to be much more often an upward market, such as is the case in the present instance, than a downward market. 16 of the 19 occurrences on record have, in fact, occurred following up markets. Of the three exceptions, two constituted reversal phenomena. The trading range ended May, 1940, followed a downswing and led into an essentially upward market, and the major bull cycle of 1949-68 was preceded by a lOS-day trading range of just under 6. The only instance of a long trading range interrupting a continuing down market took place in 1947-48. We are, thus, left with 15 instances, prior to the present one, where a narrow trad- ing range followed an upward trend. The most striking fact about these 15 instances is that 112L them constituted interruptions in continuing upward move and only four constituted reversals. There seems, in other words, a pronounced tendency for narrow channels such as the present one to turn out to be consolidations, rather than distributional tops forecastmg a reversal of the major trend. There have, of course, been the four exceptions. The 1966 bear market was pre- ceded by a 94-day, 5.96 trading range. Likewise, the 10 correction of May- June, 1965, the 13 correction of the first nine months of 1953, and the terminal phase of the 1938-42 bear market were all foreshadowed bY'protracted narrow trading-ranges. However; the-1942-46-bull-market contained no fewer than three interruptions as narrow as and longer than the current one, the bull market of 1949-53 contained two, and the upswing of 1962-66 no fewer than four. Although we certainly intend to continue to look for evidence that the present case is an exception, the historical odds, at least, favor the present trading range being a precursor to higher pnces rather than lower. Dow-Jones Industrials (1200 p.m.) S & P Composite (1200 p.m.) Cumulative Index (7/1/76) 609.10 AWT/jb 995.33 103.68 ANTHONY W. TABELL DELAFIELD, HARVEY, TABELL No statement or epress!on of oplMon or any other motter herein contolned IS, or IS to be deemed 1o be, dIrectly or Ind,rectlr.' on offer or the soliCitation of on offer 10 buy or sell any security referred 10 or mentIOned The mOIler IS presented merely for the converlenCtl of ihe subsnber who e e bel!eve the 5Our5 of our Informot!on 10 be rehable, we In no woy represent or guarantee the acurocy thereof nor of the sto'emenis mude hereon Any actIon 10 be laen by the subsr!ber should be based on h,s own InVestlgotlon ond Informot!on Jonney Montgomery Scott, Inc, as 0 corparat!of1. ond !IS offIcers or employees, moy now hove, or mClY later lake. posItIons or trades tn respet 10 any securtHes mef1ttoned In Itus or ony future ISSUe, cmd such POSttlOf1 moy be dtfferent from any views now or hereafter el'pressed In Thts or any other tssue )of1ney Montgomery Sott, Inc, whIch IS reglste'ed wl1h the SEC os 0 Investment odv!sor, moy gtve odvlee to tIS mvesfmef1f advtsory and othet CI.Islomers tndependently of any statements made In thts or tn ony o'her Issue Further mformohon on any securtty menhonC1d heretn IS aVQllable on request