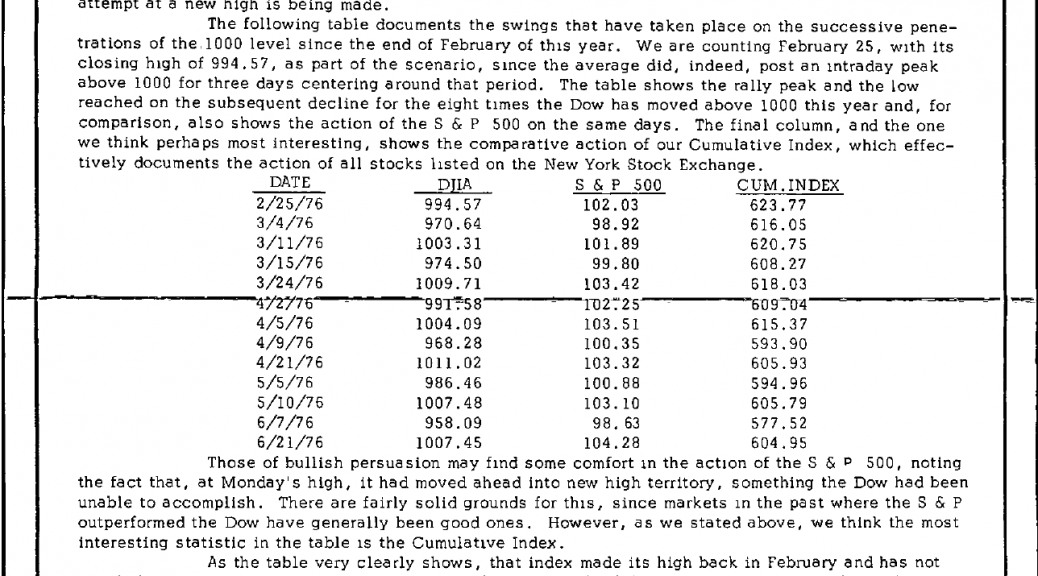 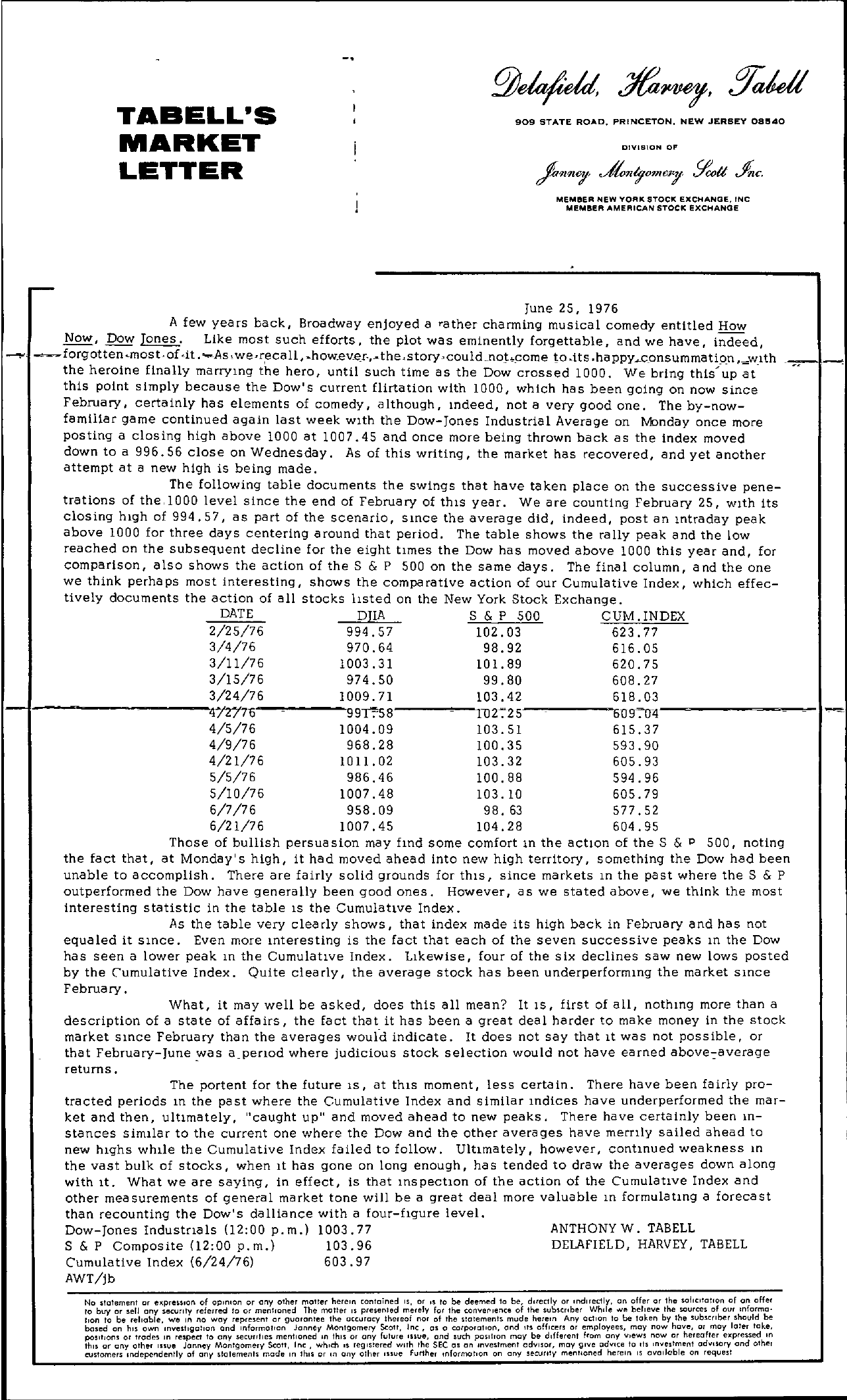 TABELL'S MARKET LETTER 909 STATE ROAD. PRINCETON, NEW JERSEY 081540 DIVISION OF MEMBER NEW YORK STOCK EXCHANGE, INC MEMBER AMERICAN STOCK EXCHANGE June 25, 1976 A few years back, Broadway enjoyed a rather charming musical comedy entitled How Now, Dow Jones. Like most such efforts, the plot was eminently forgettable, and we have, indeed, -forgotten,most. ofit .-As .we,r,ecall, .how.ever,the.story'couldnohcome to .its ,happyconsummation ,wlth …,.. the heroine finally marrymg the hero, until such time as the Dow crossed 1000. We bring thls'up at this point Simply because the Dow's current flirtation with 1000, which has been going on now since February, certainly has elements of comedy, although, mdeed, not a very good one. The by-now- familiar game continued again last week wIth the Dow-Jones Industrial Average on lv'bnday once more posting a closing high above 1000 at 1007.45 and once more being thrown back as the index moved down to a 996.56 close on Wednesday. As of this writing, the market has recovered, and yet another attempt at a new high is being made. The following table documents the swings that have taken place on the successive penetrations of the,1000 level since the end of February of thIS year. We are counting February 25, wIth its closing hIgh of 994.57, as part of the scenario, smce the average did, indeed, post an mtraday peak above 1000 for three days centering around that period. The table shows the rally peak and the low reached on the subsequent decline for the eight tImes the Dow has moved above 1000 this year and, for comparison, a Iso shows the action of the S & P 500 on the same days. The final column, a nd the one we think perhaps most interesting I shows the comparative action of our Cumulative Index, which effectively documents the action of all stocks llsted on the New York Stock Exchange. DATE DJIA S & P 500 CUM. INDEX 2/25/76 3/4/76 3/11/76 994.57 970.64 1003.31 102.03 98.92 101.89 623.77 616.05 620.75 3/15/76 974.50 99.80 608.27 3/24/76 1———4/2/T6 1009.71 99T7'58 103.42 fOrZ5 618.03 6U9'(PI——- 4/5/76 1004.09 103.51 615.37 4/9/76 4/Z1/76 968.28 1011.02 100.35 103.32 593.90 605.93 5/5/76 986.46 100.88 594.96 5/10/76 1007.48 103.10 605.79 6/7/76 958.09 98.63 577.52 6/21/76 1007.45 104.28 604.95 Those of bullish persuasion may find some comfort m the actIOn of the S & p 500, noting the fact that, at Monday's high, it had moved ahead Into new high territory, something the Dow had been unable to accomplish. There are fairly solid grounds for thIS, since markets m the past where the S & P outperformed the Dow have generally been good ones. However, as we stated above, we think the most interesting statistic in the table IS the CumulatJve Index. As the table very clearly shows, that index made its high back in February and has not equaled It smce. Even more mterestlng is the fact that each of the seven successive peaks m the Dow has seen a lower peak m the CumulatIve Index. LIkeWise, four of the six declines saw new lows posted by the Cumulative Index. Quite clearly, the average stock has been underperformmg the market smce February . What, it may well be asked, does this all mean It IS, first of all, nothmg more than a description of a state of affairs, the fact that it has been a great deal harder to make money in the stock market smce February than the averages woufd indicate. It does not say that It was not possible, or that February-June .was apenod where judicious stock selection would not have earned abovaverage returns. The portent for the future 15, at thIS moment, less certa in. There have been fa irly pro- tracted periods In the past where the Cumulative Index and similar Indices have underperformed the market and then, ultImately, caught up and moved ahead to new peaks. There have certainly been m- stances simIlar to the current one where the Dow and the other averages have merrIly sailed ahead to new hIghs whIle the Cumulative Index failed to follow. Ultlmately, however, continued weakness In the vast bulk of stocks, when It has gone on long enough, has tended to draw the averages down along with It. What we are saying, in effect, is that mspectlOn of the action of the Cumulatlve Index and other measurements of general market tone will be a great deal more valuable In formulating a forecast than recounting the Dow's dalliance with a four-flgure level. Dow-Tones Industrials (1200 p. m.) 1003.77 S & P Composite (1200 p.m.) 103.96 ANTHONY W. TAB ELL DELAFIELD, HARVEY, TABELL Cumulative Index (6/24/76) 603.97 AWT/jb No statement or expreSIon of OPiniOn or any other matter herein contained IS, or 1 to be deemed to be, directly or indirectly, on offer or the soliCitation of an offer to buy or sell ony security referred 10 or mentioned The molter IS presenled merely for the converlence of the subSCriber Whole we believe the sources of our mforma- 'Ion to be reliable, we m no way represent or guarantee the accuracy thereof nor of the statements mude herem Any odlon to be token by the subscflber shovld be based on hIS own mvestlgotlon ond Informallon Janney Montgomery Seoll, Inc, as a corporation, and .ts officers or employees, may now have, or may later take, POltlOns or trades m resped to any secUrities mentIOned In thiS or any future .ssue, ond such pOSllion may be different from any views now or hereafter expressed In thiS ar any other Issue Janney Montgomery Scali, Inc, which IS registered With the SEC as on mvestment adVisor, may give adVICe to Its Investment adVISory and othel customers Independently of any statements mode In thiS or In any other Issue Further information on any security menlloned herein IS available on request