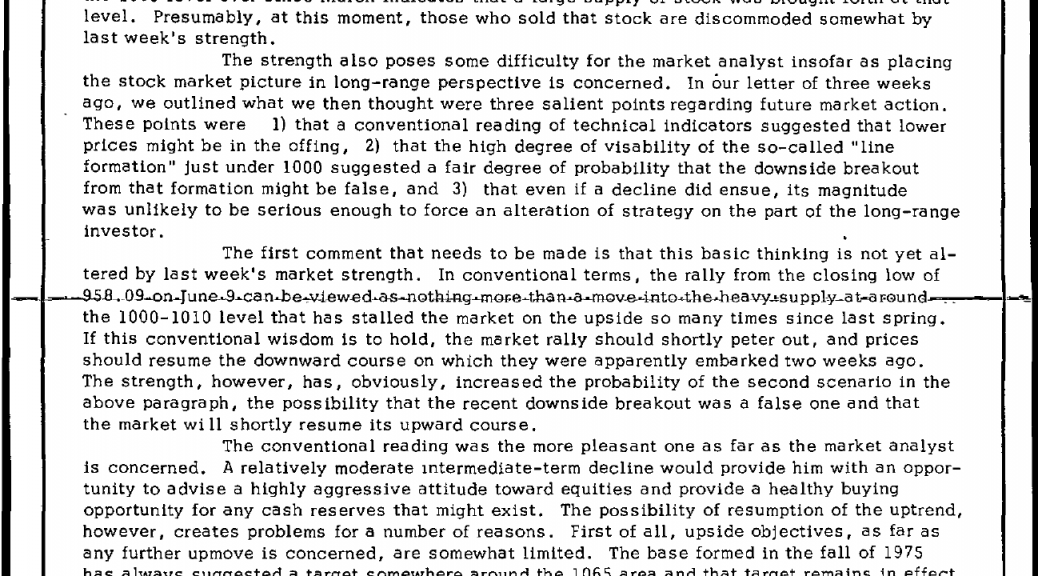 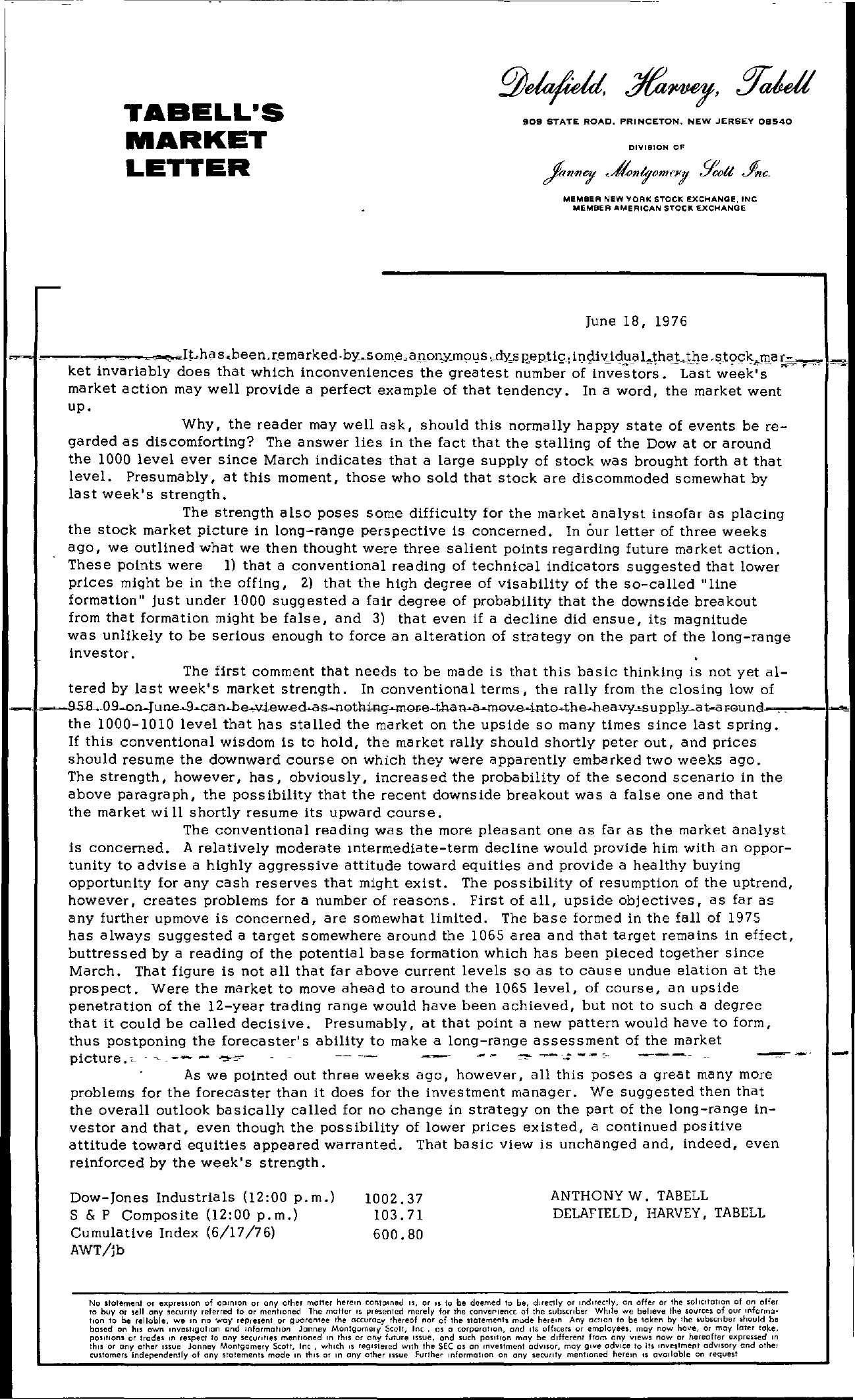 – — — — — ———————– TABELL'S MARKET LETTER 909 STATE ROAD. PRINCETON, NEW JERSEY 08540 DIVISION 01 MEMBER NEW VOAK STOCK EXCHANGE, INC MEMBER AMERICAN STOCK EXCHANGE – June 18, 1976 It,hasbeen.remarked-by.someA!lonym)llsdyosgep.tig,in9iJd.';lat.,th9Jthe.-t09k.Jll.a p ket invariably does that which inconveniences the greatest number of investors. Last week's market action may well provide a perfect example of that tendency. In a word, the market went up. Why, the reader may well ask, should this normally happy state of events be re- garded as discomforting The answer lies in the fact that the stalling of the Dow at or around the 1000 level ever since March indicates that a large supply of stock was brought forth at that level. Presumably, at this moment, those who sold that stock are discommoded somewhat by last week's strength. The strength also poses some difficulty for the market analyst insofar as placing the stock market picture in long-range perspective is concerned. In our letter of three weeks ago, we outlined what we then thought were three salient pOints regarding future market action. These points were I) that a conventional reading of technical indicators suggested that lower prices might be in the offing, 2) that the high degree of visability of the so-called line formation just under 1000 suggested a fair degree of probability that the downside breakout from that formation might be false, and 3) that even if a decline did ensue, its magnitude was unlikely to be serious enough to force an alteration of strategy on the part of the long-range investor. The first comment that needs to be made is that this basic thinking is not yet al- tered by last week's market strength. In conventional terms, the rally from the closing low of 1—-Ql.'., ''L-09-0Il–June..canw-ed…as-not-hiRg—more-tha n.a—mov-6—i-nto4heavy–,s upply-a t-a r-eu ndl….,…,….–I the 1000-1010 level that has stalled the market on the upside so many times since last spring. If this conventional wisdom is to hold, the market rally should shortly peter out, and prices should resume the downward course on which they were apparently embarked two weeks ago. The strength, however, has, obviously, increased the probability of the second scenario in the above paragraph, the possibility that the recent downSide breakout was a false one and that the market wi 11 shortly resume its upward course. The conventional reading was the more pleasant one as far as the market analyst is concerned. A relatively moderate mtermediate-term decline would provide him with an oppor- tunity to advise a highly aggressive attitude toward equities and provide a healthy buying opportunity for any cash reserves that might exist. The possibility of resumption of the uptrend, however, creates problems for a number of reasons. First of all, upside objectives, as far as any further upmove is concerned, are somewhat limited. The base formed in the fall of 1975 has always suggested a target somewhere around the 1065 area and that target remains in effect, buttressed by a reading of the potential base formation which has been pieced together since March. That figure is not all that far above current levels so as to cause undue elation at the prospect. Were the market to move ahead to around the 1065 level, of course, an upside penetration of the 12-year trading range would have been achieved, but not to such a degree that it could be called decisive. Presumably, at that point a new pattern would have to form, thus postponing the forecaster's ability to make a long-range assessment of the market picture. '- – '- – – – o- – — — —— – – –.–.-..- – – – ——- . –.– As we pOinted out three weeks ago, however, all this poses a great many mOre — problems for the forecaster than it does for the investment manager. We suggested then that the overall outlook basically called for no change in strategy on the part of the long-range in- vestor and that, even though the possibility of lower prices existed, a continued positive attitude toward equities appeared warranted. That basic view is unchanged and, indeed, even reinforced by the week's strength. Dow-Jones Industrials (1200 p.m.) S & P CompOSite (1200 p.m.) Cumulative Index (6/17/76) AWT/jb 1002.37 103.71 600.80 ANTHONY W. TABELL DELAFIELD, HARVEY, TABELL No stotement or expreulon of opmlon or any other motter herem Contained IS, or I! 10 be deemed to be, directly or ,ndlrectly, on offer or the SOllCltotlon of on offer to buy or sell any security referred to Or menhoned The moiler IS presented merely for the converolenCt of the subSCriber WhIle we believe the sources of our mformotlon to be reliable, we In no way represent or guarantee the accurac.y thereof nor of the statements mode herem Any acllOn to be token by Ihe subSCriber should be based on h,s own investIgation and mformotlon Janney Montgomery Scott, Inc. as a corporatton, and lIs offICers or employees, may now have, or may later take, pOSitions or trades tn respect to any securtttes menttoned In thts Of any future tssue, and such posttton may be dtfferent from any Vtews now or hereafter expressed tn thtS or any other ISsue Janney Montgomery Scott, tnc , which tS rt'.9lstered wtth the SEC as an mvestment odvuor, may gtve advtce to Its Investment adVisory and olhel customers independently of any statements mode In thts or tn any other tssue Further Informotton on any securtty mentIOned herein IS avotloble on request