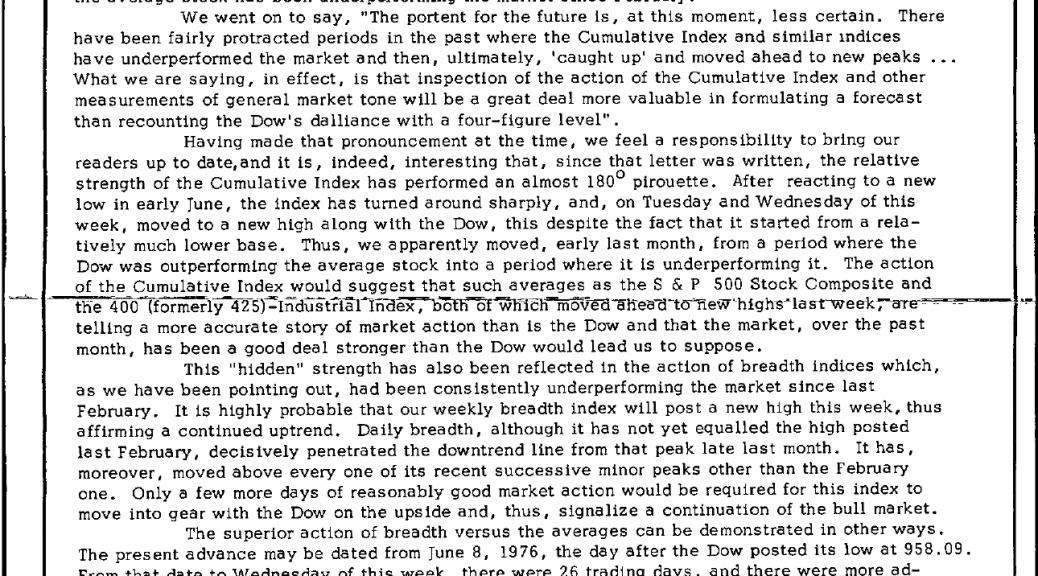 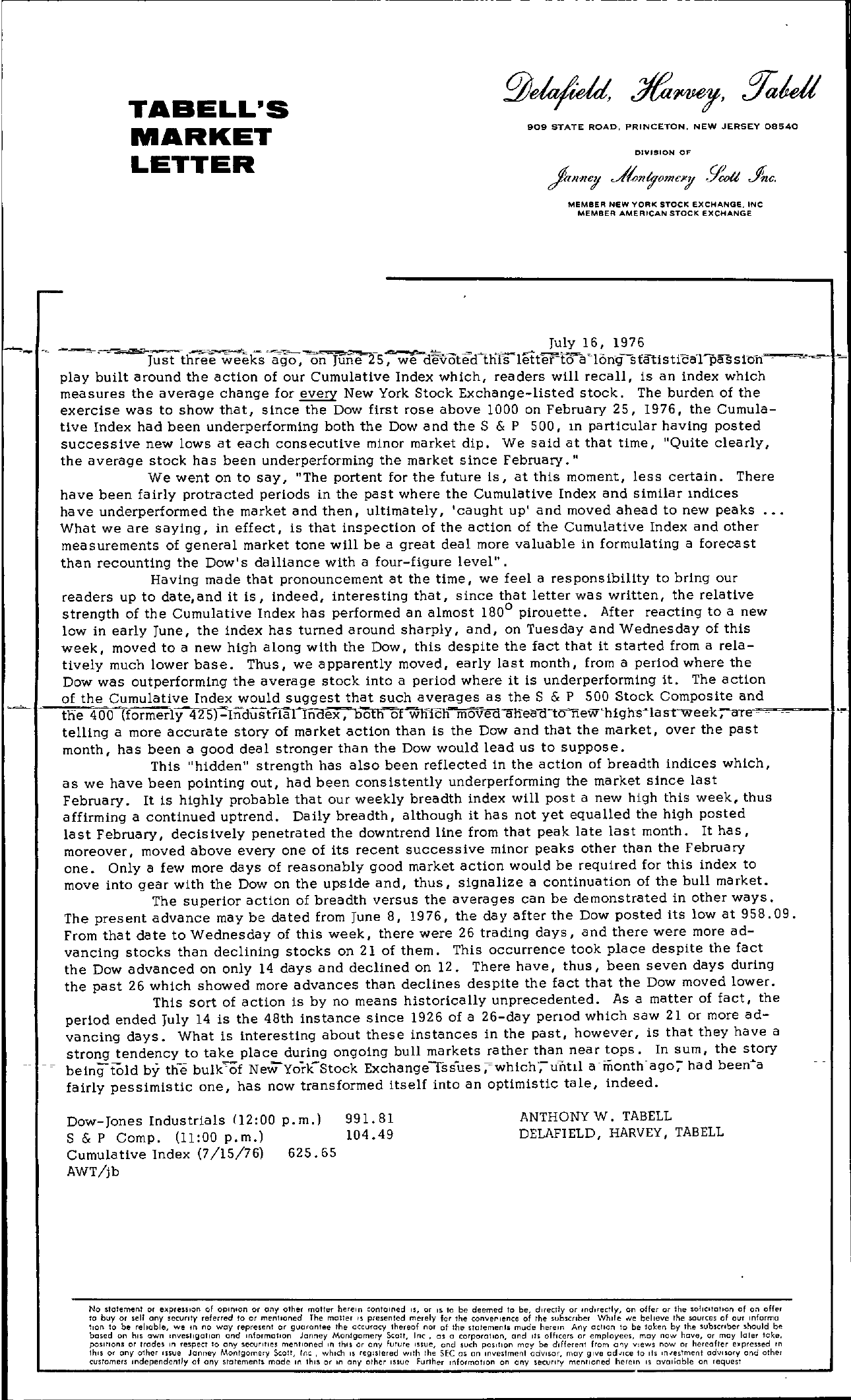 ,—————————- —- TABELL'S MARKET LETTER 909 STATE ROAD, PRINCETON, NEW JERSEY 08540 DIVISION OF MEM8ER NEW YORk STOCK EXCHANGE, INC MEMBER AMERICAN STOCK EXCHANGE – –lust th,e-., w;ek'S-ago, on JU2-5devotedthi1;-lette'6n9atiStiCalPaS sion,-.,..-t play built around the action of our Cumulative Index which, readers will recall, is an index which measures the average change for every New York Stock Exchange-listed stock. The burden of the exercise was to show that, since the Dow first rose above 1000 on February 25, 1976, the Cumulative Index had been underperforming both the Dow and the S & P 500, In particular having posted successive new lows at each consecutive minor market dip. We said at that time, Quite clearly, the average stock has been underperforming the market since February. We went on to say, The portent for the future is, at this moment, less certain. There have been fairly protracted periods in the past where the Cumulative Index and similar Indices have underperformed the market and then, ultimately, 'caught up' and moved ahead to new peaks … What we are saying, in effect, is that inspection of the action of the Cumulative Index and other measurements of general market tone will be a great deal more valuable in formulating a forecast than recounting the Dow's dalliance with a four-figure level. Having made that pronouncement at the time, we feel a responsibility to bring our readers up to date,and it is, indeed, interesting that, since that letter was written, the relative strength of the Cumulative Index has performed an almost 1800 pirouette. After reacting to a new low in early June, the index has turned around sharply, and, on Tuesday and Wednesday of this week, moved to a new high along with the Dow, this despite the fact that it started from a relatively much lower base. Thus, we apparently moved, early last month, from a period where the Dow was outperforming the average stock into a period where it is underperforming it. The action of the Cumulative Index would suggest that such averages as the S & P 500 Stock Composite and the 400 (formerly-425TIndustriaTlnaex,l5Ofhofwnich-m6ve(nnfea-d-wl1evrh19hslasrweekT8-'–,.,,..,…–t., telling a more accurate story of market action than is the Dow and that the market, over the past month, has been a good deal stronger than the Dow would lead us to suppose. This hidden strength has also been reflected in the action of breadth indices which, as we have been pointing out, had been consistently underperforming the market since last February. It is highly probable that our weekly breadth index will post a new high this week, thus affirming a continued uptrend. Daily breadth, although it has not yet equalled the high posted last February, decisively penetrated the downtrend line from that peak late last month. It has, moreover, moved above every one of its recent successive minor peaks other than the February one. Only a few more days of reasonably good market action would be required for this index to move into gear with the Dow on the upside and, thus, signalize a continuation of the bull market. The superior action of breadth versus the averages can be demonstrated in other ways. The present advance may be dated from June 8, 1976, the day after the Dow posted its low at 958.09. From that date to Wednesday of this week, there were 26 trading days, and there were more advancing stocks than declining stocks on 21 of them. This occurrence took place despite the fact the Dow advanced on only 14 days and declined on 12. There have, thus, been seven days during the past 26 which showed more advances than declines despite the fact that the Dow moved lower. This sort of action is by no means historically unprecedented. As a matter of fact, the period ended July 14 is the 48th instance since 1926 of a 26-day penod which saw 21 or more advancing days. What is interesting about these instances in the past, however, is that they have a strong tendency to take place during ongoing bull markets rather than near tops. In sum, the story being tOld by th-e bulk-of NewYorKStock Exchangelssues ;which;-untll amonthago;- had beena fairly pessimistic one, has now transformed itself into an optimistic tale, indeed. Dow-Jones Industrials (1200 p.m.) 991.81 S & P Compo (llOO p.m.) 104.49 Cumulative Index (7/15/76) 625.65 AWT/jb ANTHONY W. TABELL DELAFIELD, HARVEY, TAB ELL No statement or expression Crf opinion or any olher matter herein 'onlolrled IS, or IS to be deemed 10 be, d,redly or ind,rectly, on offer or the OIIClIOllon of on offer 10 buy or sell any security referred to or menhoned The molter IS presenfed merely for the converlence of the subscriber While He believe the sources of our mformo lion to be reliable, we In no woy represent or guarantee the accuracy thereof nor of the STatements mude herem Any action ta be laken by the subscriber hauld be based on hiS own investigation and ,nformaT,on Janney Montgomery ScOT!, Inc, as a corporClllon, and ItS officers or employees, may now have, or may later toke, positions or trades In respeCT 10 any SeCUrities mentioned In ThiS or any future Issue, and such position may be dlfferenl from oy views now or hereafter epressed In Ihls or any other Issue Janney Montgomery coll, tnc , whICh IS registered With the SEC as on Investmenl adVisor, may give odJlCe to Its InJestment adVisory olld othel cUSfomers mdependently of ony statements mode III thiS or In any other Issue Further mformatlan on allY security mentioned herein IS available on request