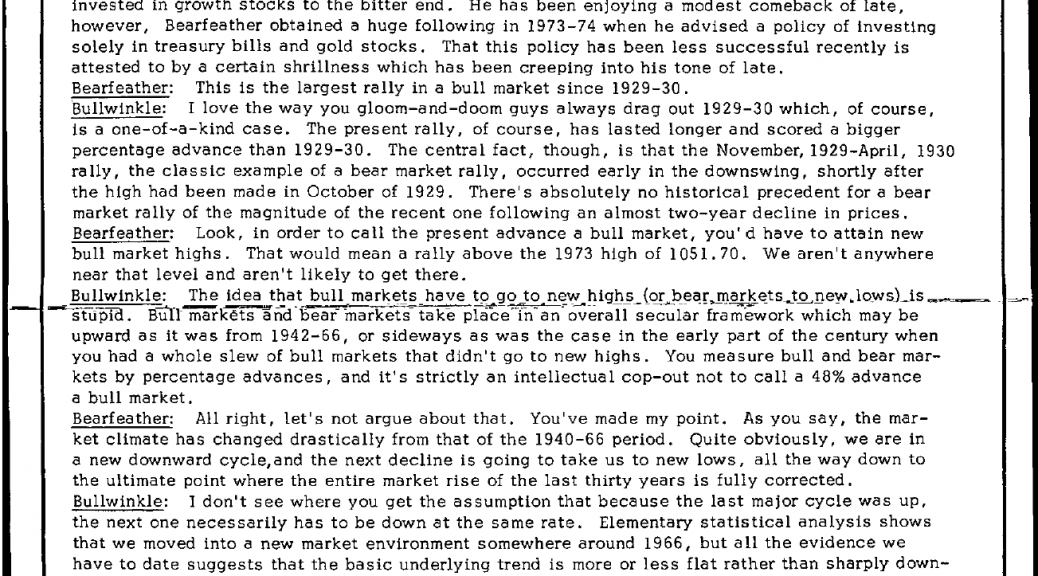 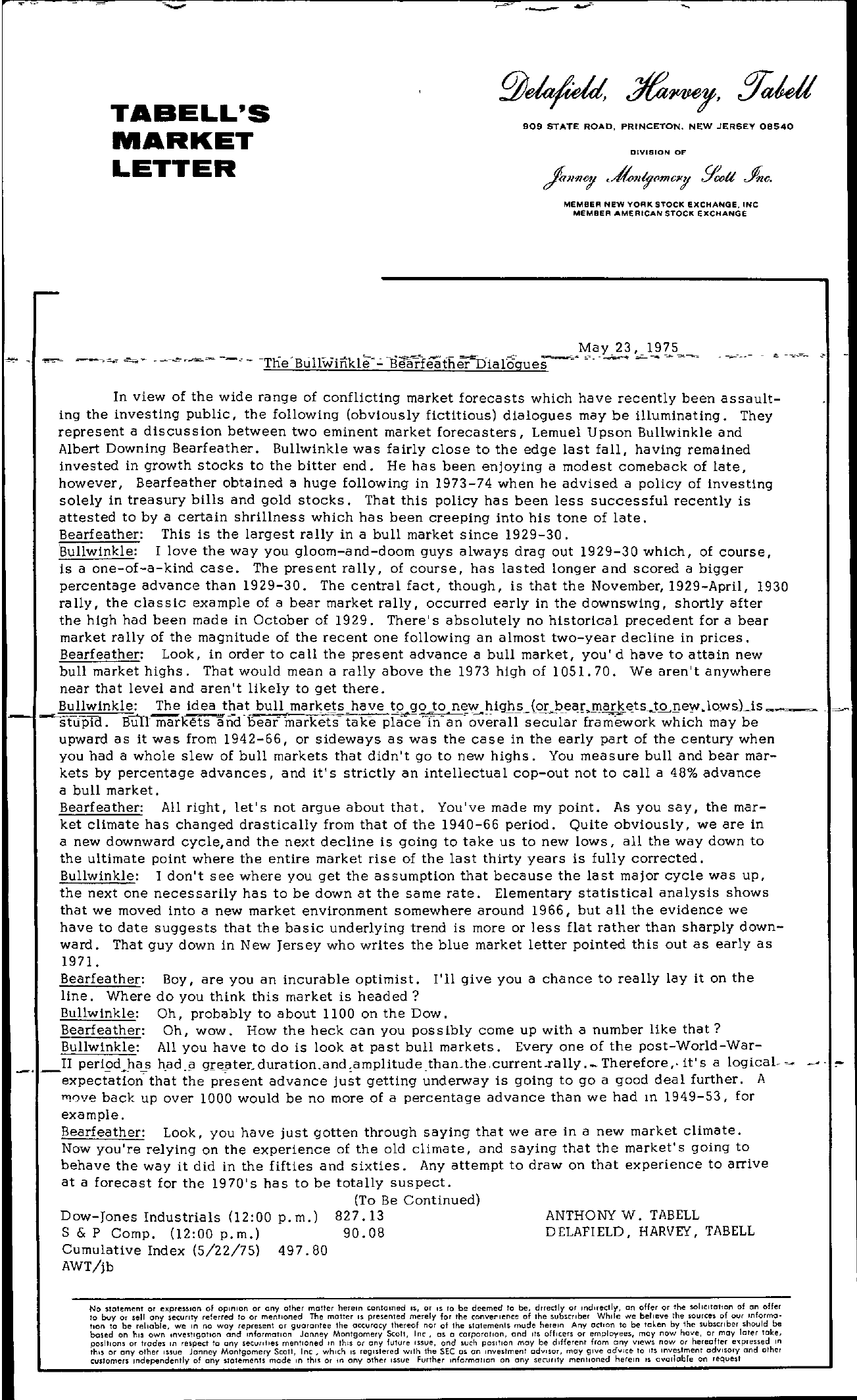 — TABELL'S MARKET LETTER – – 909 STATE ROAD, PRINCETON. NEW JERSEY 08540 DIVISION OF MEMBER NEW YORK STOCK EXCHANGE, INC MEMBER AMERICAN STOCK eXCHANGE In view of the wide range of conflicting market forecasts which have recently been assault- ing the investing public, the following (obviously fictitious) dialogues may be illuminating. They represent a discussion between two eminent market forecasters, Lemuel Upson Bullwinkle and Albert Downing Bearfeather. Bullwinkle was fairly close to the edge last fall, having remained invested in growth stocks to the bitter end. He has been enjoying a modest comeback of late, however, Bearfeather obtained a huge following in 1973-74 when he advised a policy of investing solely in treasury bills and gold stocks. That this policy has been less successful recently is attested to by a certain shrillness which has been creeping into his tone of late. Bearfeather This is the largest rally in a bull market since 1929-30. 'Bullwinkle I love the way you gloom-and-doom guys always drag out 1929-30 which, of course, is a one-of-a-kind case. The present rally, of course, has lasted longer and scored a bigger percentage advance than 1929-30. The central fact, though, is that the November, 1929-April, 1930 rally, the classic example of a bear market rally, occurred early in the downswing, shortly after the high had been made in October of 1929. There's absolutely no historical precedent for a bear market rally of the magnitude of the recent one following an almost two-year decline in prices. Bearfeather Look, in order to call the present advance a bull market, you'd have to attain new bull market highs. That would mean a rally above the 1973 high of 1051.70. We aren't anywhere near that level and aren't likely to get there. – Bullwinkle The idea tat bull marketshave !2.go to ne.V!..higb,,torbear!I1a!etstne;v.lo!Nsis , stupia. Bullmarkets and 'bear- markets take place'-fn- an' overall secular framework which may be upward as it was from 1942-66, or sideways as was the case in the early part of the century when you had a whole slew of bull markets that didn't go to new highs. You measure bull and bear mar- kets by percentage advances, and it's strictly an intellectual cop-out not to call a 48 advance a bull market. Bearfeather All right, let's not argue about that. You've made my point. As you say, the mar- ket climate has changed drastically from that of the 1940-66 period. Quite obviously, we are in a new downward cycle,and the next decline is going to take us to new lows, all the way down to the ultimate point where the entire market rise of the last thirty years is fully corrected. Bullwinkle I don't see where you get the assumption that because the last major cycle was up, the next one necessarily has to be down at the same rate. Elementary statistical analysis shows that we moved into a new market environment somewhere around 1966, but all the evidence we have to date suggests that the basic underlying trend is more or less flat rather than sharply down- ward. That guy down in New Jersey who writes the blue market letter pointed this out as early as 1971. Bearfeather Boy, are you an incurable optimist. I'll give you a chance to really lay it on the line. Where do you think this market is headed Bullwinkle Oh, probably to about 1100 on the Dow. Bearfeather Oh, wow. How the heck can you possibly come up with a number like that Bullwinkle All you have to do is look at past bull markets. Every one of the post-World-War- . II perid.has h,ad.!l grejlterduration.and,amplitude thanthe ,current.rally. Therefore,. it's a logical. – expectation' that the present advance just getting underway is gOing to go a good deal further. A love back up over 1000 would be no more of a percentage advance than we had m 1949-53, for example. Bearfeather Look, you have just gotten through saying that we are in a new market climate. Now you're relying on the experience of the old climate, and saying that the market's going to behave the way it did in the fifties and sixties. Any attempt to draw on that experience to arrive at a forecast for the 1970' s has to be totally suspect. (To Be Continued) Dow-Jones Industrials (1200 p.m.) 827.13 ANTHONYW. TABELL S & P Compo (1200 p.m.) 90.08 DELAFIELD, HARVEY, TABELL Cumulative Index (5/22/75) 497.80 AWT/jb ,.. No stalement or expressIon of op'nion or any olher motler herein contamed IS, or . to be deemed to be, drrectly or Ind,rectly, on offer or the sollcltohon of on oHer 10 buy or sell any security referred 10 or mentioned The matter 1 presented merely for the converlence of the subscrIber Whde oNe believe the sources of our Informaho/\ 10 be reliable, we In no way represent or guarantee the accurocy thereof nor ot the statements mude herein Any achon to be tclen by ihe subSCriber should be bosed on hiS own inVestigation and Informotlon Janney Montgomery Scott, Inc, as a corporation, and Its officers or employees, may now have, or may later toke, positions or trades In respect to any secuntles mentioned In thiS or any future Issue, and such position moy be different from any views now or hereofter expressed In thiS or any other lSue Jonney Montgomery Scott, Inc, which IS registered wlln the SEC os on Investment adVisor, may give cavlce to Its Investment adVisory and other customers Independently of any stotements made In thiS or jI\ any other Issue Further information on any security mentioned herein IS available on request