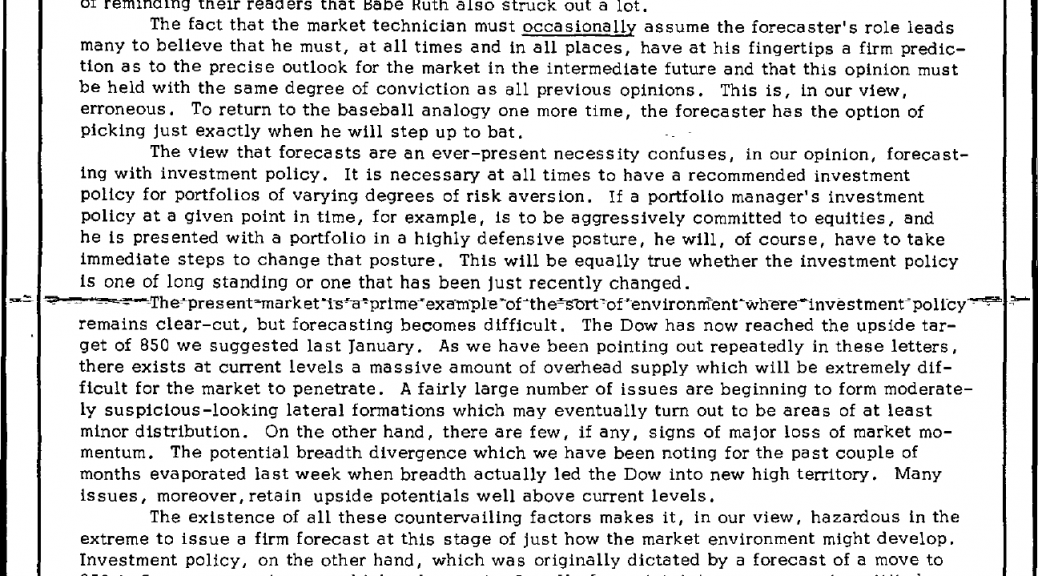 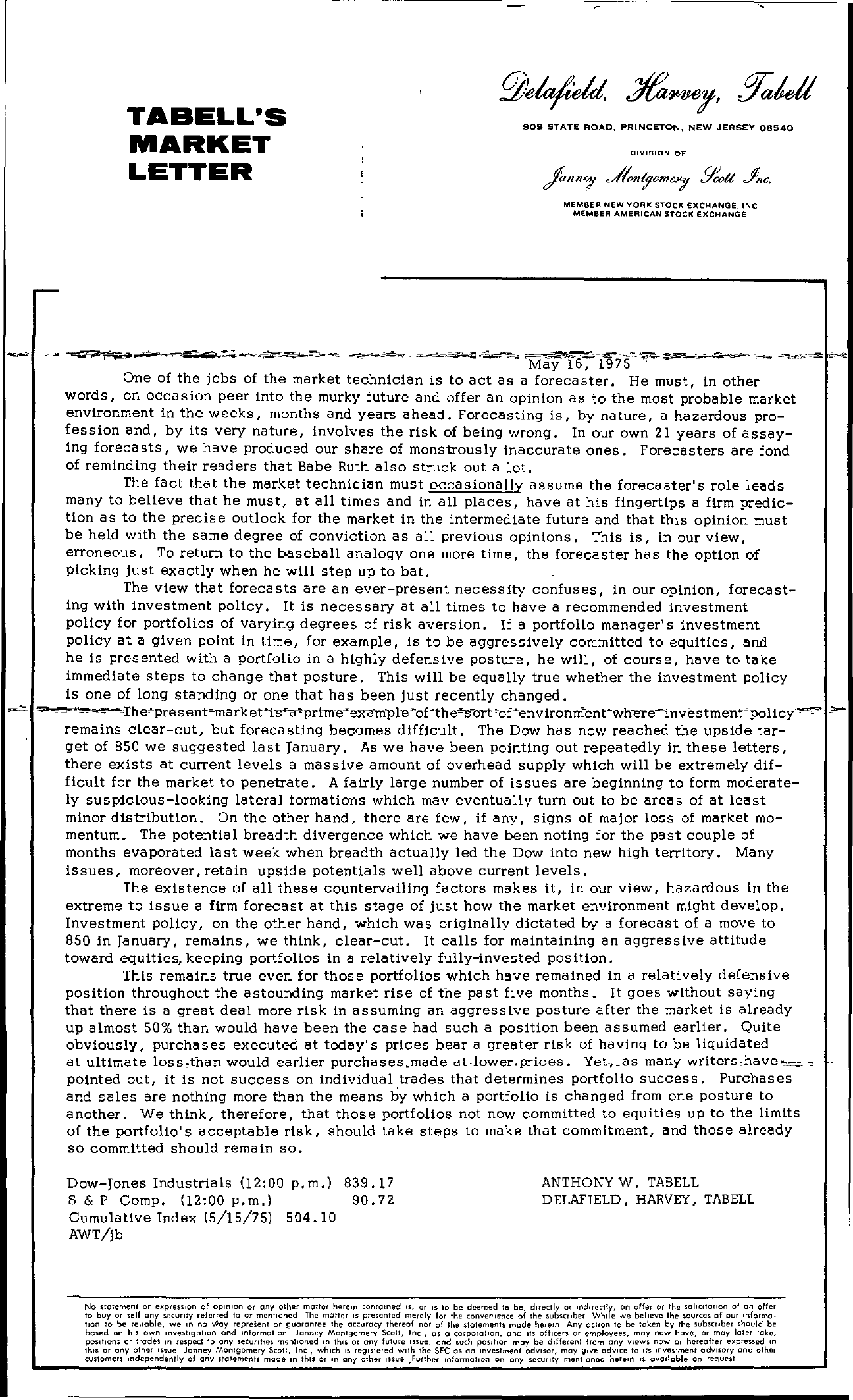 TABELL'S MARKET LETTER 909 STATE ROAD. PRINCETON. NEW JERSEY 08540 DIVISION OF MEMBER NEW VORl. STOCK EXCHANGE, INC MEMBER AMERICAN STOCK EXCHANGE — – …. …;0;;;;; …… –.' -.. ——-;c … ….—;;!i-e'.; -'–'–…. ……. May 16, 1975 . One of the jobs of the market technician is to act as a forecaster. He must, in other words, on occasion peer into the murky future and offer an opinion as to the most probable market environment in the weeks, months and years ahead. Forecasting is, by nature, a hazardous pro- fession and, by its very nature, involves the risk of being wrong. In our own 21 years of assay- ing forecasts, we have produced our share of monstrously inaccurate ones. Forecasters are fond of reminding their readers that Babe Ruth also struck out a lot. The fact that the market technician must occasionally assume the forecaster's role leads many to believe that he must, at all times and in all places, have at his fingertips a firm predic- tion as to the precise outlook for the market in the intermediate future and that this opinion must be held with the same degree of convlction as all previous opinions. This is, in our view, erroneous. To return to the baseball analogy one more time, the forecaster has the option of plcking just exactly when he will step up to bat. The view that forecasts are an ever-present necessity confuses, in our opinion, forecast- ing with investment policy. It is necessary at all times to have a recommended investment policy for portfolios of varying degrees of risk aversion. If a portfolio manager's investment policy at a given point in time, for example, is to be aggressively committed to equities, and he is presented with a portfolio in a highly defensive posture, he will, of course, have to take immediate steps to change that posture. This will be equally true whether the investment policy is one of long standing or one that has been just recently changed. .. . – Thepresentmarkettsaprlmeex-amp-e-of-the''-ort-ofenVironnlennNh'ere-investment'polrcy 'l- remains clear-cut, but forecasting becomes difficult. The Dow has now reached the upside tar- get of 850 we suggested last January. As we have been pointing out repeatedly in these letters, there exists at current levels a massive amount of overhead supply which will be extremely dif- ficult for the market to penetrate. A fairly large number of issues are beginning to form moderate- ly suspicious-looking lateral formations which may eventually turn out to be areas of at least minor distribution. On the other hand, there are few, if any, signs of major loss of market mo- mentum. The potential breadth divergence which we have been noting for the past couple of months evaporated last week when breadth actually led the Dow into new high territory. Many issues, moreover, retain upside potentials well above current levels. The existence of all these countervailing factors makes it, in our view, hazardous in the extreme to issue a firm forecast at this stage of just how the market environment might develop. Investment policy, on the other hand, which was originally dictated by a forecast of a move to 850 in January, remains, we think, clear-cut. It calls for maintaining an aggressive attitude toward equities, keeping portfolios in a relatively fully-invested position. This remains true even for those portfolios which have remained in a relatively defensive position throughout the astounding market rise of the past five months. It goes without saying that there is a great deal more risk in assuming an aggressive posture after the market is already up almost 50 than would have been the case had such a position been assumed earlier. Quite obviously, purchases executed at today's prices bear a greater risk of having to be liquidated at ultimate loss.than would earlier purchases.made at.lower.prices. Yet.,.as many writers.have—, pOinted out, it is not success on individual trades that determines portfolio success. Purchases and sales are nothing more than the means by which a portfolio is changed from one posture to another. We think, therefore, that those portfolios not now committed to equities up to the limits of the portfolio's acceptable risk, should take steps to make that commitment, and those already so committed should remain so. Dow-Jones Industrials (1200 p.m.) 839.17 S & P Compo (1200 p. m.) 90.72 Cumulative Index (5/15/75) 504.10 AWT/jb ANTHONY W. TABELL DELAFIELD, HARVEY, TAB ELL No statement or expressIon of opinIon or any other motter hereIn contained '5, or IS to be deemed to be, dIrectly or ,ndirectly, on offer or the sollcllotlon of on offer to buy or sell any security referred to or mentIoned The matler IS presented merely for the converlenee of the subscriber While oNe belIeve the sources of our informatIOn to be relIable, we In no woy represent or guaranlee the accuracy thereof nor of the statemenb mude herein Any act.an to be token by the subscr.ber should be based on hIS own Invest'gollon and Info,mollOn Janney MonTgomery SCali, Inc. as a corporatIon, and ,IS offIcers or employees, may now have, or may later lake, posItIons or trades In respect to any seCurles mentla'\ed In Ih,s or any fuTure Issue, and such pOSItIon may be dIfferent from ony vIews now Or hereafter expressed In thiS or any olher Issue Janney Montgomery Stott, tnc, whIch IS regIstered wllh the SEC os on Inveslment adVIsor, rnoy gIve odvlce to lIs Investment odvlsory and other customers Independently of any latemCllls mode In thiS or ' any other Issue .Further Informal Ion on any security mentioned hereIn , ovalloble on request