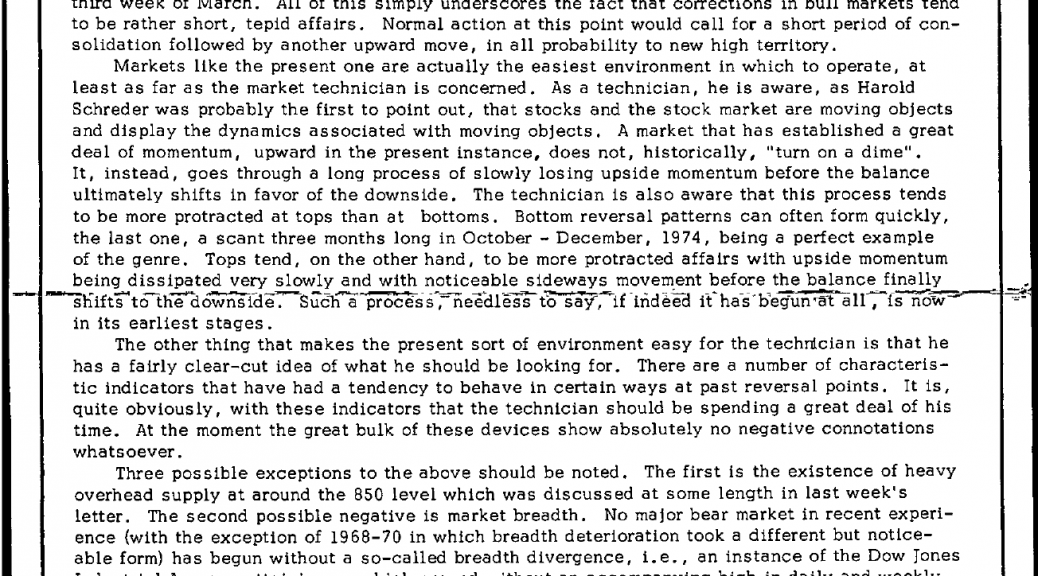 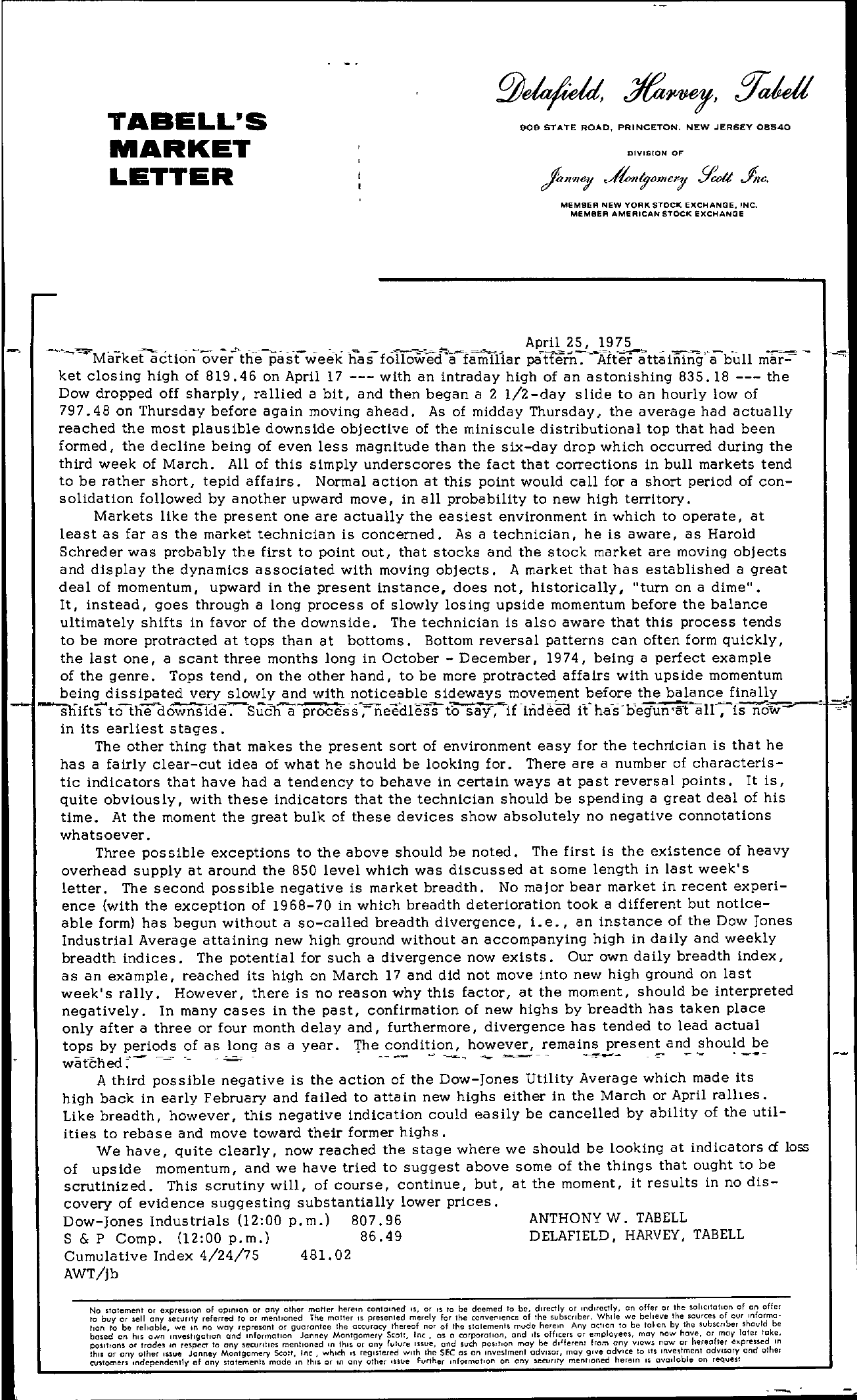 TABELL'S MARKET LETTER 909 STATE ROAD, PRINCETON. NEW JERSEY 08540 DIVISION OF MEMBER NEW VORK STOCK EXCHANGE, INC. MEMBEA AMERICAN STOCK EXCHANGE April 25, 1975 -Marketacticinovr tl1epastweek has follc;ceci(namil1ar pittern—–After attainintab-ull mar– –,, ket closing high of 819.46 on April 17 — with an intraday high of an astonishing 835.18 — the Dow dropped off sharply, rallied a bit, and then began a 2 1/2-day slide to an hourly low of 797.48 on Thursday before again moving ahead. As of midday Thursday, the average had actually reached the most plausible downside objective of the miniscule distributional top that had been formed, the decline being of even less magnitude than the six-day drop which occurred during the third week of March. All of this simply underscores the fact that corrections in bull markets tend to be rather short, tepid affairs. Normal action at this point would call for a short period of consolidation followed by another upward move, in all probability to new high territory. Markets like the present one are actually the easiest environment in which to operate, at least as far as the market technician is concerned. As a technician, he is aware, as Harold Schreder was probably the first to pOint out, that stocks and the stock market are moving objects and display the dynamics associated with moving objects. A market that has established a great deal of momentum, upward in the present instance, does not, historically, turn on a dime. It, instead, goes through a long process of slowly lOSing upside momentum before the balance ultimately shifts in favor of the downside. The technician is also aware that this process tends to be more protracted at tops than at bottoms. Bottom reversal patterns can often form quickly, the last one, a scant three months long in October – December, 1974, being a perfect example of the genre. Tops tend, on the other hand, to be more protracted affairs with upside momentum being dissipated very slowly and with noticeable sideways movement before the balance finally – -Snlftstothe'downsTile—Sucha process-,- needless to say;-ifirideea ifha-g'b'egun -at all–;-fs no''w,–.of-;,i, in its earliest stages. The other thing that makes the present sort of environment easy for the technician is that he has a fairly clear-cut idea of what he should be looking for. There are a number of characteris- tic indicators that have had a tendency to behave in certain ways at past reversal pOints. It is, quite obviously, with these indicators that the technician should be spending a great deal of his time. At the moment the great bulk of these devices show absolutely no negative connotations whatsoever. Three possible exceptions to the above should be noted. The first is the existence of heavy overhead supply at around the 850 level which was discussed at some length in last week's letter. The second possible negative is market breadth. No major bear market in recent experi- ence (with the exception of 1968-70 in which breadth deterioration took a different but notice- able form) has begun without a so-called breadth divergence, l.e., an instance of the Dow Jones Industrial Average attaining new high ground without an accompanying high in daily and weekly breadth indices. The potential for such a divergence now exists. Our own daily breadth index, as an example, reached its high on March 17 and did not move into new high ground on last week's rally. However, there is no reason why this factor, at the moment, should be interpreted negatively. In many cases in the past, confirmation of new highs by breadth has taken place only after a three or four month delay and, furthermore, divergence has tended to lead actual tops by periods of as long as a year. 'jhe condition, however, remains present and should be watched – — — – …, –….., — —– – – – – – – . —- A third possible negative is the action of the Dow-Jones Utility Average which made its high back in early February and failed to attain new highs either in the March or April ralhes. Like breadth, however, this negative indication could easily be cancelled by ability of the util- ities to rebase and move toward their former highs. We have, quite clearly, now reached the stage where we should be looking at indicators cf loss of upside momentum, and we have tried to suggest above some of the things that ought to be scrutinized. This scrutiny will, of course, continue, but, at the moment, it results in no dis- covery of evidence suggesting substantially lower prices. Dow-Jones Industrials (1200 p. m.) 807.96 ANTHONY W. TAB ELL S & P Compo (1200 p.m.) 86.49 DELAFIELD, HARVEY, TAB ELL Cumulative Index 4/24/75 AWT/jb 481. 02 No statement or expression of opmlon or ony other motter herein contolned IS, or IS 10 be deemed to be, directly or ,nd,rectly, on offer or the 50ilcltohon of on offer to buy or sell ony SeC\Hlty referred to or mentioned The moIler IS presented merely for the conVe1lenCE of the subSCriber, While we believe the sources of our Informotlon to be reliable, we In no way represent or guorontee the accuracy thereof nor of the statements mude herein Any action to be tocn by the subscllber should be based on hiS ONn Investigation and information Janney Montgomery Scol!, Inc, as 0 corpora/Ion, and 115 officers or employees, may now have, or may loler take, poslitons or Irades 1M respect 10 any surltles mentioned In Ihls or any future Issue, and such pOSItion may be dllferent from ony views now or hereaher expressed 1M thiS or any other Issue Janney Montgomery Seot, Inc, which IS registered With the SEC as on IMvestment adVisor, moy give odvlCe to Its IMvestmenl adVISOry and other customers Independently of any statements made In thiS or 1M any other Issue Further mformallon on ony security mentioned herem IS ovolloble on request