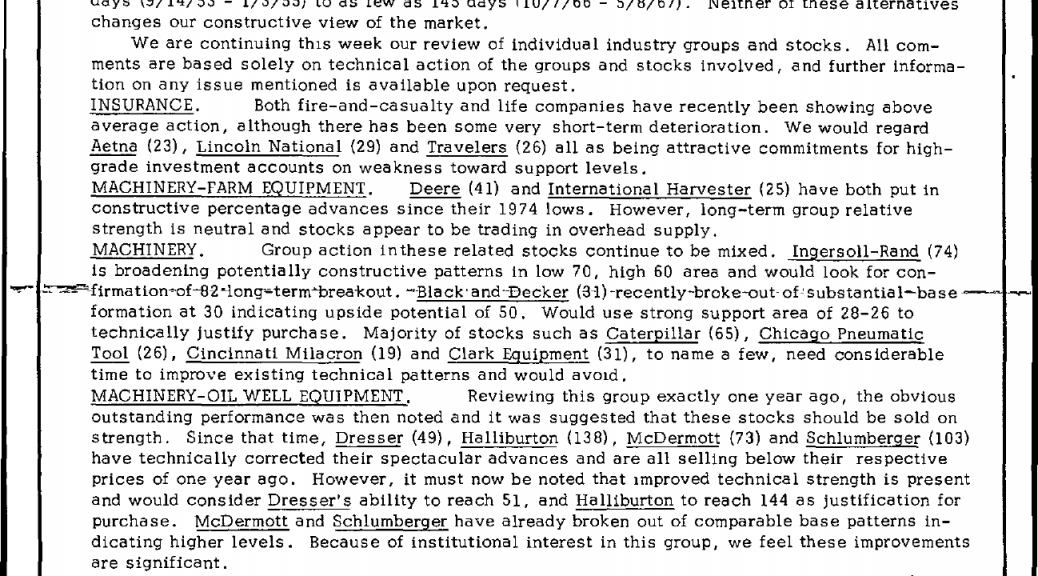 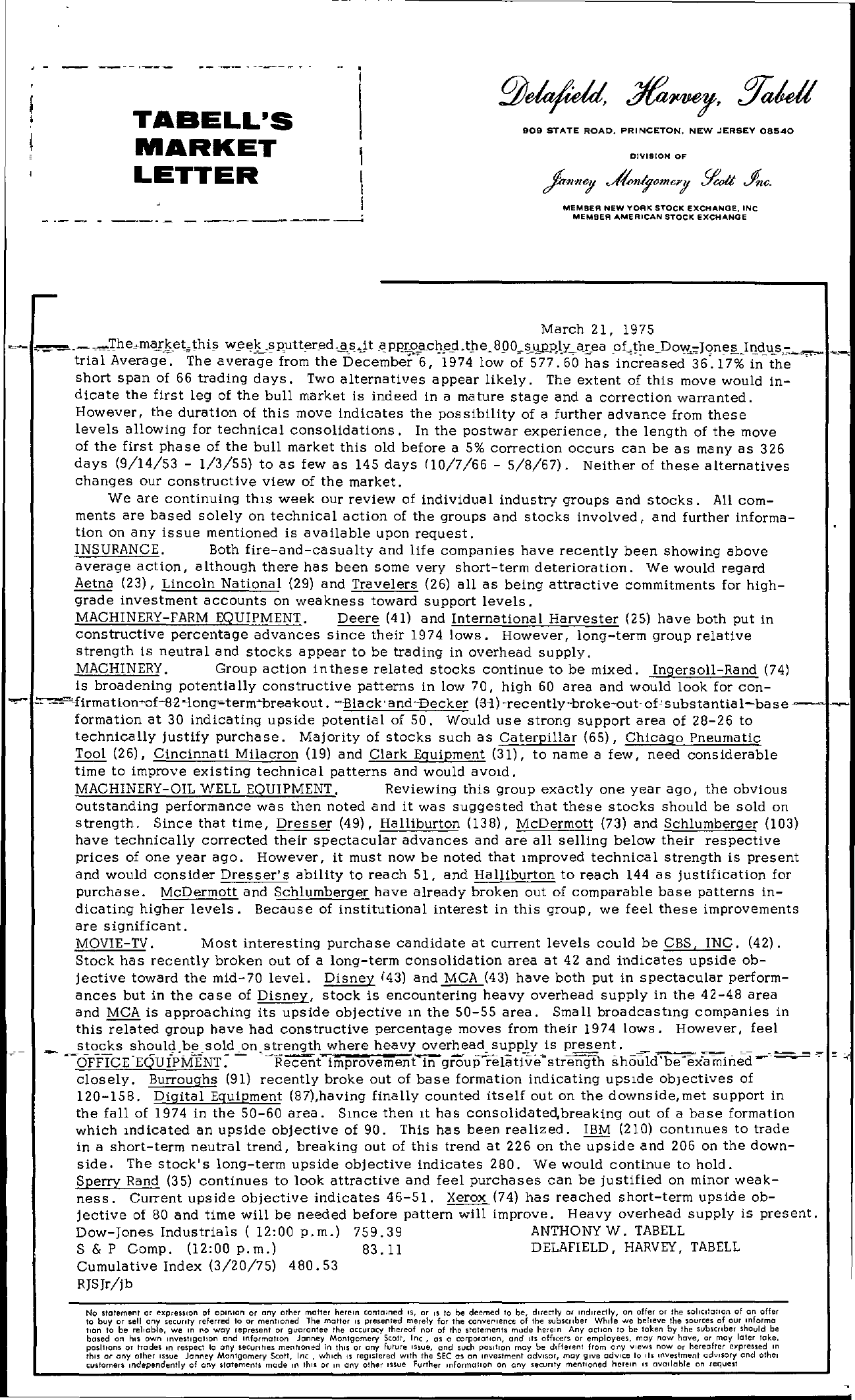 TABELL'S MARKET LETTER 909 STATE ROAD. PRINCETON, NEW JERSEY 08540 DIVISION OF MEMBER NEW VOAK STOCK EXCHANGE, INC MEMBER A,MERICAN STOCK EXCHANGE – March 21, 1975 -…. ThemaJtet this wS'ei s p,uttered Jls.j.t PJlwacted.tj1e. 890'-tl–Rpya!-ea oftheDo'&,J()neJ-tls;- '' trial Average. The average from the December 6,1974 low of 577.60 has increased 36-.17 in the' short span of 66 trading days. Two alternatives appear likely. The extent of this move would in- dicate the first leg of the bull market is indeed in a mature stage and a correction warranted. However, the duration of this move indicates the possibility of a further advance from these levels allowing for technical consolidations. In the postwar experience, the length of the move of the first phase of the bull market this old before a 5 correction occurs can be as many as 326 days (9/14/53 – 1/3/55) to as few as 145 days (10/7/66 – 5/8/67). Neither of these alternatives changes our constructive view of the market. We are continuing th,S week our review of individual industry groups and stocks. All com- ments are based solely on technical action of the groups and stocks involved, and further informa- tion on any issue mentioned is available upon request. INSURANCE. Both fire-and-casualty and life companies have recently been showing above average action, although there has been some very short-term deterioration. We would regard Aetna (23), Lincoln National (29) and Travelers (26) all as being attractive commitments for high- grade investment accounts on weakness toward support levels. MACHINERY-FARM EQUIPMENT. Deere (41) and International Harvester (25) have both put in constructive percentage advances since their 1974 lows. However, long-term group relative strength is neutral and stocks appear to be trading in overhead supply. MACHINERY. Group action in these related stocks continue to be mixed. Ingersoll-Rand (74) is broadening potentially constructive patterns in low 70, high 60 area and would look for con…….. -firmationof-BQ longtermbreakout. Black and-Becker (3-1.) -recently-broke-out- of' substantial-ba se – – formation at 30 indicating upside potential of 50. Would use strong support area of 28-26 to technically justify purchase. Majority of stocks such as Caterpillar (65), Chicago Pneumatic Tool (26), Cincinnati Milacron (19) and Clark Equipment (31), to name a few, need considerable time to improve existing technical patterns and would aVOld. MACHINERY-OIL WELL EQUIPMENT. Reviewing this group exactly one year ago, the obvious outstanding performance was then noted and it was suggested that these stocks should be sold on strength. Since that time, Dresser (49), Halliburton (138), McDermott (73) and Schlumberger (103) have technically corrected their spectacular advances and are all selling below their respective prices of one year ago. However, it must now be noted that Improved technical strength is present and would consider Dresser's ability to reach 51, and Halliburton to reach 144 as justification for purchase. McDermott and Schlumberger have already broken out of comparable base patterns in- dicating higher levels. Because of institutional interest in this group, we feel these improvements are significant. MOVIE-TV. Most interesting purchase candidate at current levels could be CBS. INC. (42). Stock has recently broken out of a long-term consolidation area at 42 and indicates upside ob- jective toward the mid-70 level. Disney (43) and MCA (43) have both put in spectacular perform- ances but in the case of Disney, stock is encountering heavy overhead supply in the 42-48 area and MCA is approaching its upside objective m the 50-55 area. Small broadcastmg companies in this related group have had constructive percentage moves from their 1974 lows. However, feel stocks should be sold on strength where heavy overhead supply is present. – — — '.,…. -…;…. — ….– .-… —,;-.- – -;;… -. –;0 – – '—- — – ;.r OFFICE EQUIPMENT. Recent improvement in group relative strength should be examined closely. Burroughs (91) recently broke out of base formation indicating upsIde objectives of 120-158. Digital Equipment (87),having finally counted itself out on the downside,met support in the fall of 1974 in the 50-60 area. Smce then It has consolidated,breaking out of a base formation which mdicated an upside objective of 90. This has been realized. IBM (210) contmues to trade in a short-term neutral trend, breaking out of this trend at 226 on the upside and 206 on the down- side. The stock's long-term upside objective indicates 280. We would continue to hold. Sperry Rand (35) continues to look attractive and feel purchases can be justified on minor weak- ness. Current upside objective indicates 46-51. Xerox (74) has reached short-term upside ob- jective of 80 and time will be needed before pattern will improve. Heavy overhead supply is present. Dow-Jones Industrials (1200 p.m.) 759.39 ANTHONYW. TABELL S & P Compo (1200 p.m.) 83.11 DELAFIELD, HARVEY, TABELL Cumulative Index (3/20/75) 480.53 RJSJr/jb No statement or expression of opinion or any other motter herein contained IS, or IS 10 be deemed to be, directly or indirectly, on offer or the sollcltotlon of on offer 10 buy or sell any security referred 10 or mentioned The matter IS presented merely for The converlenCE of the subscriber While we believe the sources of our mforma lion 10 be reliable, we In no way represent or guarantee the accuracy thereof nor of the statements mude herem Any action to be taken by the subscriber shOuld be based on hiS own Invesllgahon and Infarmallon Janney Montgomery Scott, Inc, as a corporation, and Its officers or employees, may now have, or may later lake, poslltons or trades In respect ta any SeCUrities mentioned In thiS or any future Issue, cnd such position may be different from any views now or hereafter eypressed In thIS or any other Issue Janney Montgomery Scott, Inc, which IS registered With the SEC os on investment adVisor, may give adVice to Its Investment adVisory ond othel customers Independently of any statements made In Ihls or In any other Issue Further information on any security mentioned herein IS available on request