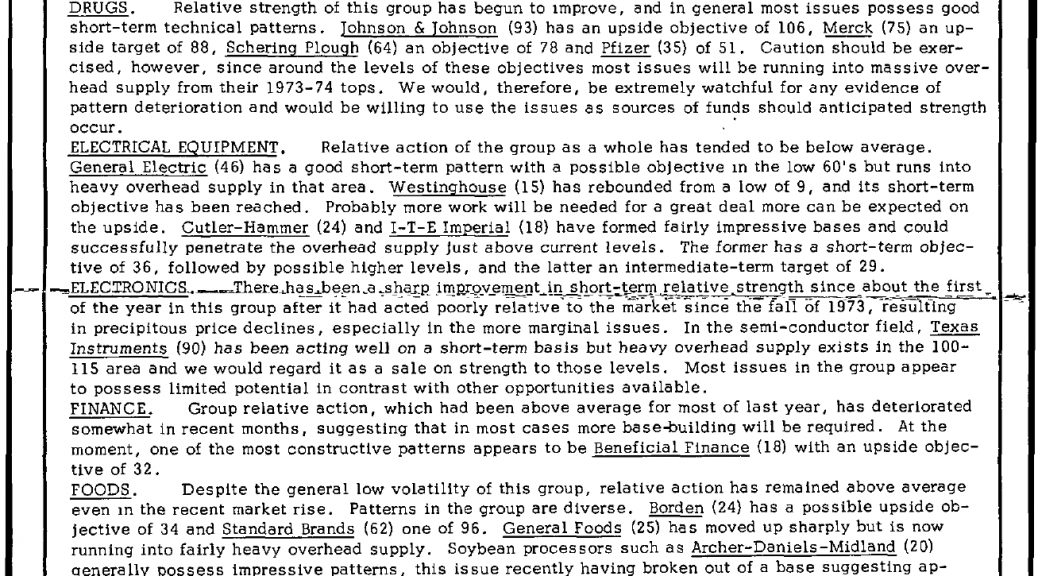 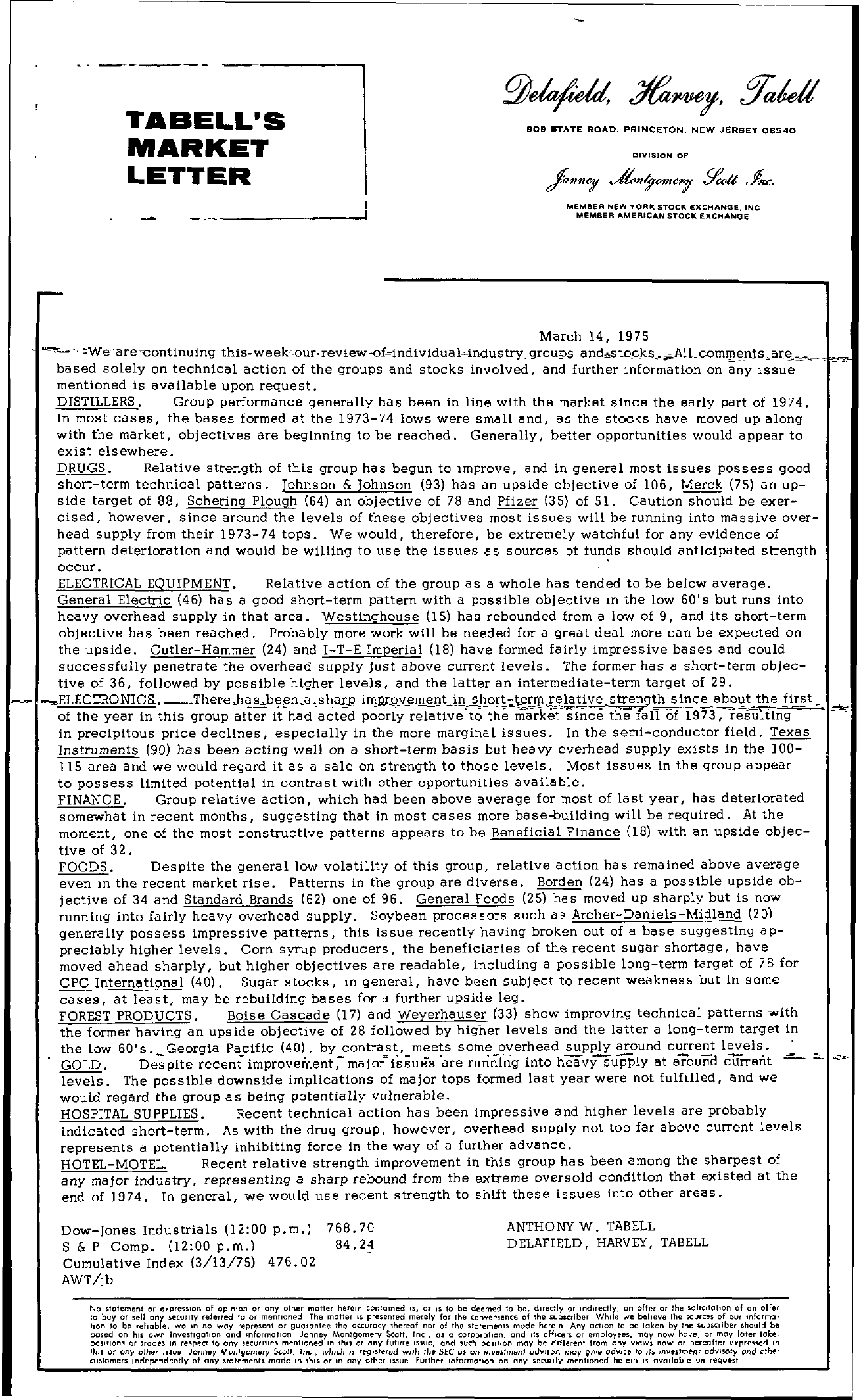 — – – – – – – – – – – – , TABELL'S MARKET LETTER I I – ——- -,I – 909 STATE ROAD, PRINCETON. NEW JERSEY 08540 DIVISION OF MEMBER NEW VORl( STOCK eXCHANGE, INC MEMBER AMERICAN STOCK EXCHANGE March 14, 1975 ' -. We- are Continuing this-week-cour- revlew-ofindividualindustry groups andstocks. .,AIL com'1'ptsoar-, based solely on technical action of the graups and stacks involved, and further infarmation on any issue mentioned is available upon request. DISTILLERS. Group performance generally has been in line with the market since the early part of 1974. In most cases, the bases formed at the 1973-74 laws were small and, as the stocks have moved up along with the market, objectives are beginning to be reached. Generally, better opportunities would appear to exist elsewhere. DRUGS. Relative strength of this graup has begun to. lmprove, and in general mast issues possess good short-term technical patterns. Johnson & Johnson (93) has an upside abjective af 106, Merck (75) an up- side target of 88, Schering Plough (64) an objective of 78 and Pfizer (35) of 51. Cautian shauld be exer- cised, however, since around the levels of these objectives most issues will be running into. massive over- head supply from their 1973-74 tops. We would, therefore, be extremely watchful for any evidence of pattern deterioration and would be willing to. use the issues as sources of funs shauld antiCipated strength occur. ELECTRICAL EQUIPMENT. Relative action of the group as a whole has tended to. be below average. General Electric (46) has a gaod short-term pattern with a possible objective In the low 60's but runs into heavy overhead supply in that area. Westinghause (15) has rebounded from a low of 9, and its short-term objective has been reached. Probably more work will be needed for a great deal more can be expected an the upside. Cutler-Hammer (24) and I-T-E Imperial (18) have formed fairly impressive bases and cauld successfully penetrate the overhead supply just above current levels. The former has a short-term objec- tive af 36, fallowed by possible higher levels, and the latter an intermediate-term target of 29. ELECTRONICS——-Therehasbe,en.a oshaIR .i1l!Rr-2yen-leotln sll.ort-tE!rl11tive .strength since abaut the first of the year in this group after it had acted poorly relative-to the market since the fa-ll of 1973-;l-esulfing in precipitous price declines, especially in the more marginal issues. In the semi-conductor field, Texas Instruments (90) has been acting well on a short-term basis but heavy overhead supply exists in the 100- ll5 area and we would regard it as a sale on strength to those levels. Most issues in the group appear to possess limited potential in contrast with ather oppartunities available. FINANCE. Graup relative action, which had been above average for most of last year, has deteriorated somewhat in recent months, suggesting that in most cases more base-building will be required. At the moment, one of the most canstructive patterns appears to be Beneficial Finance (18) with an upside objec- tive of 32. FOODS. Despite the general law volatility of this group, relative action has remained abave average even In the recent market rise. Patterns in the group are diverse. Borden (24) has a pas sible upside ob- jective of 34 and Standard Brands (62) one of 96. General Foods (25) has moved up sharply but is now running into fairly heavy overhead supply. Soybean pracessors such as Archer-Daniels-Midland (20) generally possess impressive patterns, this issue recently having broken out of a base suggesting ap- preciably higher levels. Corn syrup producers, the benefiCiaries af the recent sugar shortage, have moved ahead sharply, but higher objectives are readable, including a possible long-term target of 78 for CPC International (40). Sugar stacks, In general, have been subject to recent weakness but in some cases, at least, may be rebuilding bases for a further upside leg. FOREST PRODUCTS. Boise Cascade (17) and Weyerhauser (33) show improving technical patterns with the former having an upside objective of 28 followed by higher levels and the latter a lang-term target in the low 60's. Geargia Pacific (40), by contrast, meets some overhead supply around current levels. GOLD. Depite recent impravement;- majot issuesare rurining into heavysupply at around current – levels. The possible downside implications of major tops formed last year were not fulftlled, and we would regard the group as being potentially vulnerable. HOSPITAL SUPPLIES. Recent technical action has been impressive and higher levels are probably indicated short-term. As with the drug group, however, overhead supply not tao far abave current levels represents a potentially inhibiting farce in the way of a further advance. HOTEL-MOTEL Recent relative strength improvement in this group has been among the sharpest of any major industry, representing a sharp rebound from the extreme oversold condition that existed at the end of 1974. In general, we wauld use recent strength to. shift these issues into other areas. Dow-Jones Industrials (1200 p.m.) S & P Camp. (1200 p.m.) Cumulative Index (3/13/75) 476.02 AWT/jb 768.70 84.24 ANTHONY W. TABELL DELAFIELD, HARVEY, TAB ELL No slclemenl or expression of opinion or any other motter herein contamed 1, Of IS to be deemed to be, directly or Indirectly, an offer or the SollCllatlon of on offer to buy or sell any security referred to or mentioned The matter IS presented merely for the convelImc of Ihe subscriber While we believe the sources of our tnforma- tlon 10 be rellable, we tn no way represent or guorantee Ihe accuracy thereof nor of the statements mode herein Any aCTIOn 10 be token by the subscriber should be based on hiS own Investigation and tnformatlon Janney Montgomery Scali, Inc, as a corporation, and Its officers or employees, mCJy now have, or may later toke, poSitions or trades tn respect to any sCVrllles mentioned tn Ihls or any future Issue, and such POSition may be different from any views now or hereafter expressed tn 'hIS or any other ISlue Janney Montgomery Scott, Inc, which II registered With 'he SEC as on Iflvestment adVisor, may give adVice to Its Investment adVISOry and other rustomers Independently ot any statements mode In IhlS or In any other Inue Further Information on any seC\.JfIty menlloned herein IS available on request