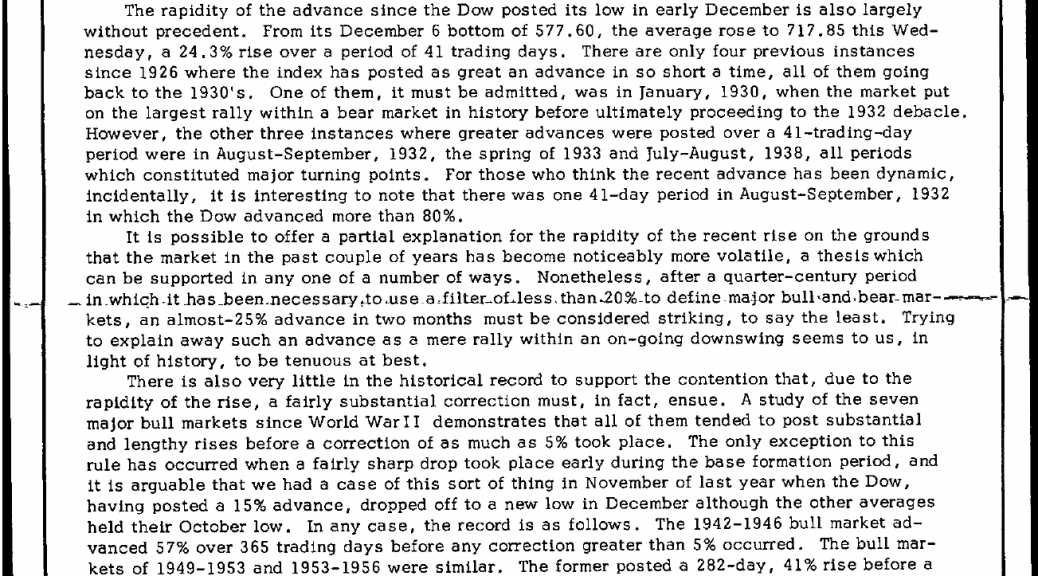 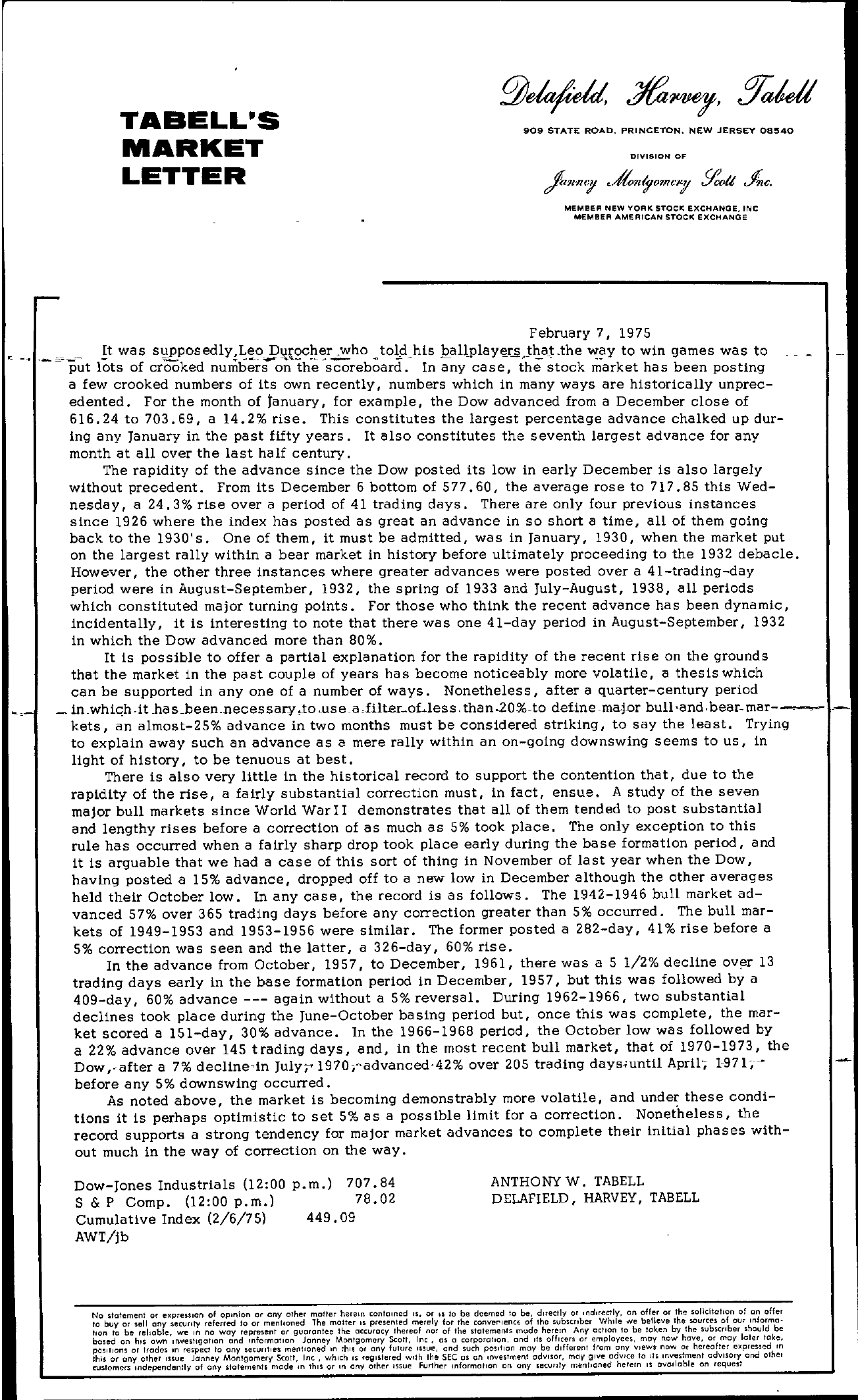 TABELL'S MARKET LETTER 909 STATE ROAD, PRINCETON. NEW JERSEY 08!540 DIVISION OF MEMBER NEW YORK STOCK EXCHANGE, INC MEMBER AMERICAN STOCK EXCHANGE February 7, 1975 . It was sl!Pposedly.Leo. Dyrocher ,who toldhis banplayrJ1 thaJ.the way to win games was to 0. .., .- put lots of crooked numb;j-So,,th'e -sCorebard. In -any case,the stock market has been posting a few crooked numbers of its own recently, numbers which in many ways are historically unprecedented. For the month of fanuary, for example, the Dow advanced from a December close of 616.24 to 703.69, a 14.2 rise. This constitutes the largest percentage advance chalked up during any January in the past fifty years. It also constitutes the seventh largest advance for any month at all over the last half century. The rapidity of the advance since the Dow posted its low in early December is also largely without precedent. From its December 6 bottom of 577 60, the average rose to 717.85 this Wednesday, a 24.3 rise over a period of 41 trading days. There are only four previous instances since 1926 where the index has posted as great an advance in so short a time, all of them going back to the 1930's. One of them, it must be admitted, was in January, 1930, when the market put on the largest rally within a bear market in history before ultimately proceeding to the 1932 debacle. However, the other three instances where greater advances were posted over a 41-trading-day period were in August-September, 1932, the spring of 1933 and July-August, 1938, all periods which constituted major turning points. For those who think the recent advance has been dynamic, incidentally, it is interesting to note that there was one 41-day period in August-September, 1932 in which the Dow advanced more than 80. It is possible to offer a partial explanation for the rapidity of the recent rise on the grounds that the market in the past couple of years has become noticeably more volatile, a thesis which can be supported in anyone of a number of ways. Nonetheless, after a quarter-century period in.which.it .hasbeen.necessary,to cuse.a,filterofless. than.20.to define.major bulland.bear-mar-kets, an almost-25 advance in two months must be considered striking, to say the least. Trying to explain away such an advance as a mere rally within an on-going downswing seems to us, in light of history, to be tenuous at best. There is also very little in the historical record to support the contention that, due to the rapidity of the rise, a fairly substantial correction must, in fact, ensue. A study of the seven major bull markets since World War II demonstrates that all of them tended to post substantial and lengthy rises before a correction of a s much as 5 took place. The only exception to this rule has occurred when a fairly sharp drop took place early during the base formation period, and it is arguable that we had a case of this sort of thing in November of last year when the Dow, having posted a 15 advance, dropped off to a new low in December although the other averages held their October low. In any case, the record is as follows. The 1942-1946 bull market advanced 57 over 365 trading days before any correction greater than 5 occurred. The bull markets of 1949-1953 and 1953-1956 were similar. The former posted a 282-day, 41 rise before a 5 correction was seen and the latter, a 326-day, 60 rise. In the advance from October, 1957, to December, 1961, there was a 5 1/2 decline ovr 13 trading days early in the base formation period in December, 1957, but this was followed by a 409-day, 60 advance — again without a 5 reversal. During 1962-1966, two substantial declines took place during the June-October basing period but, once this was complete, the market scored a lSI-day, 30 advance. In the 1966-1968 period, the October low was followed by a 22 advance over 145 trading days, and, in the most recent bull market, that of 1970-1973, the Dow,.after a 7 decline-in July,. 1970;'advanced'42 over 205 trading days,until April; 1971;' before any 5 downswing occurred. As noted above, the market is becoming demonstrably more volatile, and under these condi- tions it is perhaps optimistic to set 5 as a possible limit for a correction. Nonetheless, the record supports a strong tendency for major market advances to complete their initial phases with- out much in the way of correction on the way. Dow-Jones Industrials (1200 p.m.) 707.84 S & P Compo (1200 p.m.) 78.02 Cumulative Index (2/6/75) 449.09 AWT/jb ANTHONY W. TABELL DELAFIELD, HARVEY, TAB ELL No statement Of expression of opmion or cny otner motter herem contomed IS, or IS to be deemed 10 be, directly or Indirectly. on offer or the 50llcllollon of on offer to buy or sell onr. serunly referred 10 or mentioned The motter IS presented merely for the converlenc of the Suhscflber V/h.le -He beUeve the sources of our Informolion 10 be rehab e, we ,n no way represent or guarantee the accuracy Ihereof nor of Ihe Ialemenls mode herem Any acllon 10 be laken by the subsCriber should be based on hiS own IOvesligollon and ,nformal Ion Janney Monlgomery Scott, Inc, as a corporation, and liS officers or employees, may now have, or may later toke, poslllOns or trades In respect to any securities mentioned In thiS or any fulure Issue, and such position may be different from any views now or hereafter expressed In this or cny olher Issue Janney Montgomery Scott, Inc, which IS registered with Ihe SEC as on Investment adVisor, may give adVice to Its Investment adVISOry cnd olhel customers Independently of cny stotements mode 10 thiS or In any other Issue Further Information on cny secvnly menhoned herein IS available on requesl