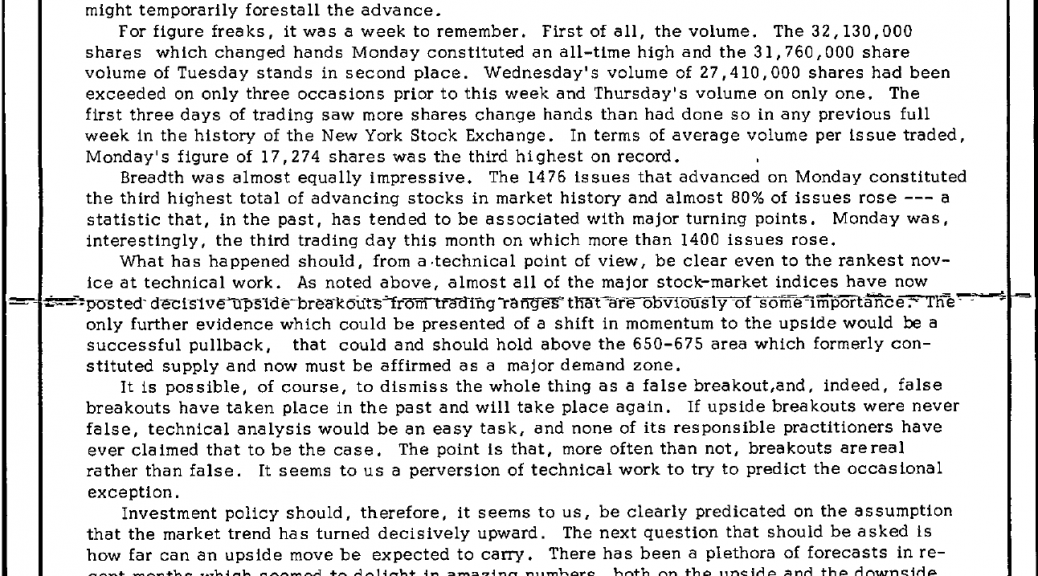 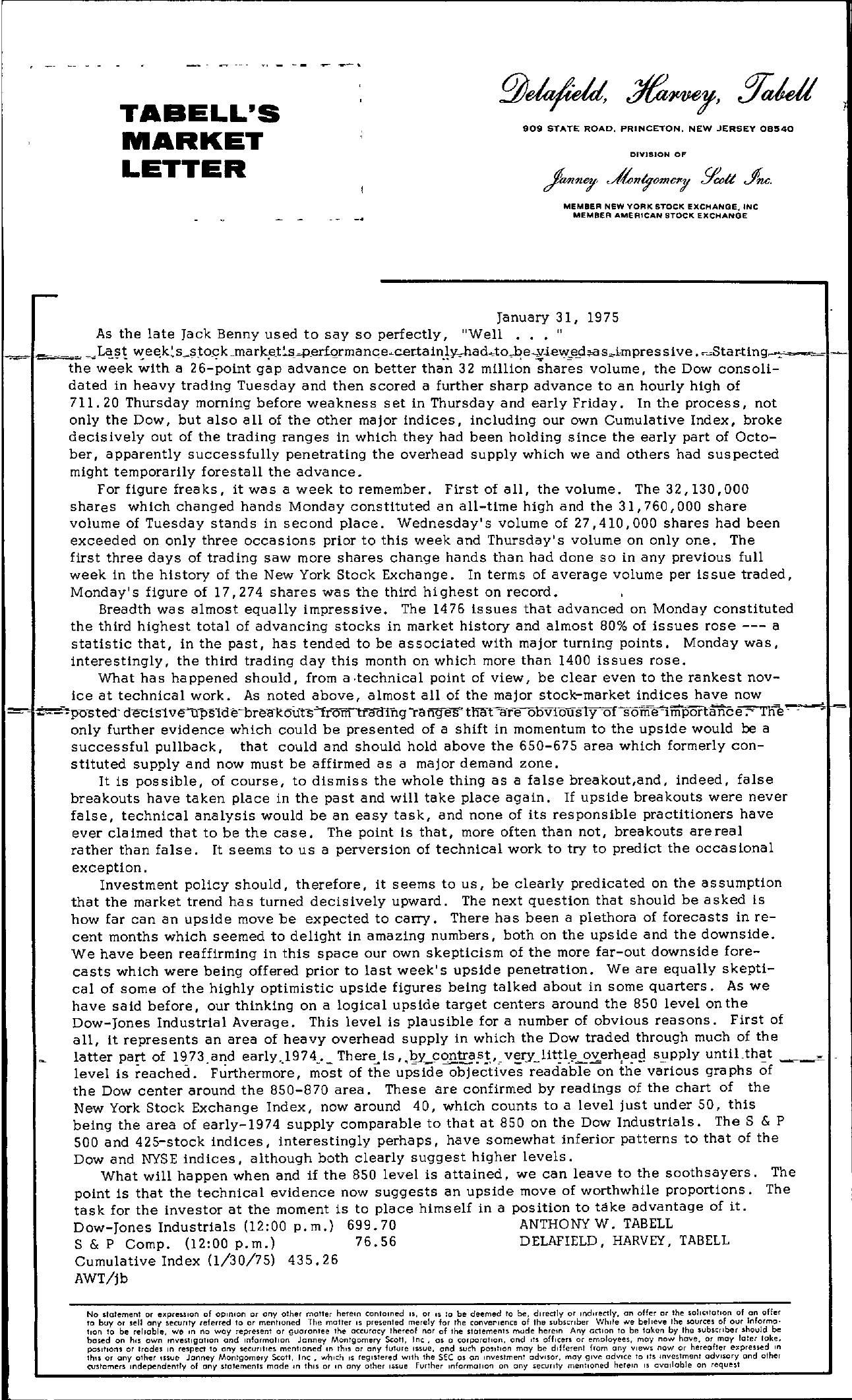 TABELL'S MARKET LETTER 909 STATE ROAD, PRINCETON. NEW JERSEY 08540 DIVISION OF MEMBER NEW YORK STOCK EXCHANOE, INC MEMBER AMERICAN STOCK EXCHANGE January 31, 1975 As the late Jack Benny used to say so perfectly, Well. . .! eks-to-ck-mark.e.t.sp-erfQrmancecertain.yhadtobe-.ieed,,si-mpres sive. Star-ting , – the week with a 26-point gap advance on better than 32 million shares volume, the Dow consoli- dated in heavy trading Tuesday and then scored a further sharp advance to an hourly high of 711.20 Thursday morning before weakness set in Thursday and early Friday. In the process, not only the Dow, but also all of the other major indices, including our own Cumulative Index, broke decisively out of the trading ranges in which they had been holding since the early part of Octo- ber, apparently successfully penetrating the overhead supply which we and others had suspected might temporarily forestall the advance. For figure freaks, it was a week to remember. First of all, the volume. The 32,130,000 shares which changed hands Monday constituted an all-time high and the 31,760,000 share volume of Tuesday stands in second place. Wednesday's volume of 27,410,000 shares had been exceeded on only three occasions prior to this week and Thursday's volume on only one. The first three days of trading saw more shares change hands than had done so in any previous full week in the history of the New York Stock Exchange. In terms of average volume per issue traded, Monday's figure of 17,274 shares was the third highest on record. Breadth was almost equally impressive. The 1476 issues that advanced on Monday constituted the third highest total of advancing stocks in market history and almost 80 of issues rose — a statistic that, in the past, has tended to be associated with major turning points. Monday was, interestingly, the third trading day this month on which more than 1400 issues rose. What has happened should, from a .technical point of view, be clear even to the rankest nov- ice at technical work. As noted above, almost all of the major stock-market indices have now ' ''-p)'sted d-efs1l7elrpsldebr,a1.outs-'-from-ttadTflg'ranges tna-t 'oreol5v!OlIsly -of some'lmPOrtance;Tl1e only further evidence which could be presented of a shift in momentum to the upside would be a successful pullback, that could and should hold above the 650-675 area which formerly con- stituted supply and now must be affirmed as a major demand zone. It is possible, of course, to dismiss the whole thing as a false breakout,and, indeed, false breakouts have taken place in the past and will take place again. If upside breakouts were never false, technical analysis would be an easy task, and none of its responsible practitioners have ever claimed that to be the case. The point is that, more often than not, breakouts arereal rather than false. It seems to us a perversion of technical work to try to predict the occasional exception. Investment policy should, therefore, it seems to us, be clearly predicated on the assumption that the market trend has turned decisively upward. The next question that should be asked is how far can an upside move be expected to carry. There has been a plethora of forecasts in re- cent months which seemed to delight in amazing numbers, both on the upside and the downside. We have been reaffirming in this space our own skepticism of the more far-out downside fore- casts which were being offered prior to last week's upside penetration. We are equally skepti- cal of some of the highly optimistic upside figures being talked about in some quarters. As we have said before, our thinking on a logical upside target centers around the 850 level on the Dow-Jones Industrial Average. This level is plausible for a number of obvious reasons. First of all, it represents an area of heavy overhead supply in which the Dow traded through much of the latter pa of 1973.and early,)974.. Thereis')1'ycgJl!.S!, .. vrylit!1-9erh,e!,9 spply until.thit level is reached. Furthermore, most of the upside objectives readable on the various graphs of – the Dow center around the 850-870 area. These are confirmed by readings of the chart of the New York Stock Exchange Index, now around 40, which counts to a level just under 50, this being the area of early-1974 supply comparable to that at 850 on the Dow Industrials. The S & p 500 and 425-stock indices, interestingly perhaps, have somewhat inferior patterns to that of the Dow and NYSE indices, although both clearly suggest higher levels. What will happen when and if the 850 level is attained, we can leave to the soothsayers. The point is that the technical evidence now suggests an upside move of worthwhile proportions. The task for the investor at the moment is to place himself in a position to take advantage of it. Dow-Jones Industrials (1200 p.m.) 699.70 ANTHONYW. TAB ELL S & P Compo (1200 p.m.) 76.56 DELAFIELD, HARVEY, TABELL Cumulative Index (1/30/75) 435.26 AWT/jb No statement or expression of opinion or any other molter herein contomed 15, or IS 10 be deemed 10 be, directly or Indorectly, on offer or the SOllcllollon of on offer to buy or sell cny secvrlty referred 10 or mentioned The mOiler IS presented merely for the convellence of the subscrtber While oNe believe the sources of our lnformo hon to be reliable, We In no way represent or guarantee the accuracy thereof nor of the statements mode herein Any action to be token by the subscriber should be based on hiS own InvestigaTIon and informatIOn Janney Montgomery Scali, Inc, as 0 corporation, ond Its officers or emoloyees, moy now hove, or may later take, positions or trades In respect to any securthes mentioned In thiS or any future Issue, ond such pOSition may be different from any views now or hereoher expressed In thiS or any other ISsue Janney Montgomery Sco1!, Inc. which IS registered With the SEC as an Investment odvlsor, may give adVice to Its Investment adVisory and other customers Independently of any statements mode If\ thiS or In any other Issue Further Informotlon on ony seolflty mentioned herein IS available on request