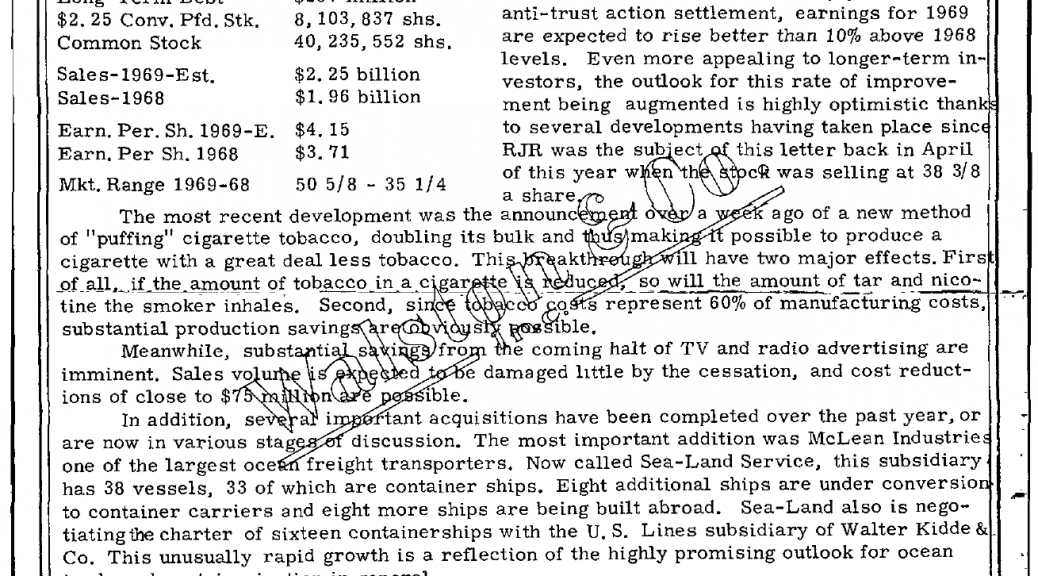 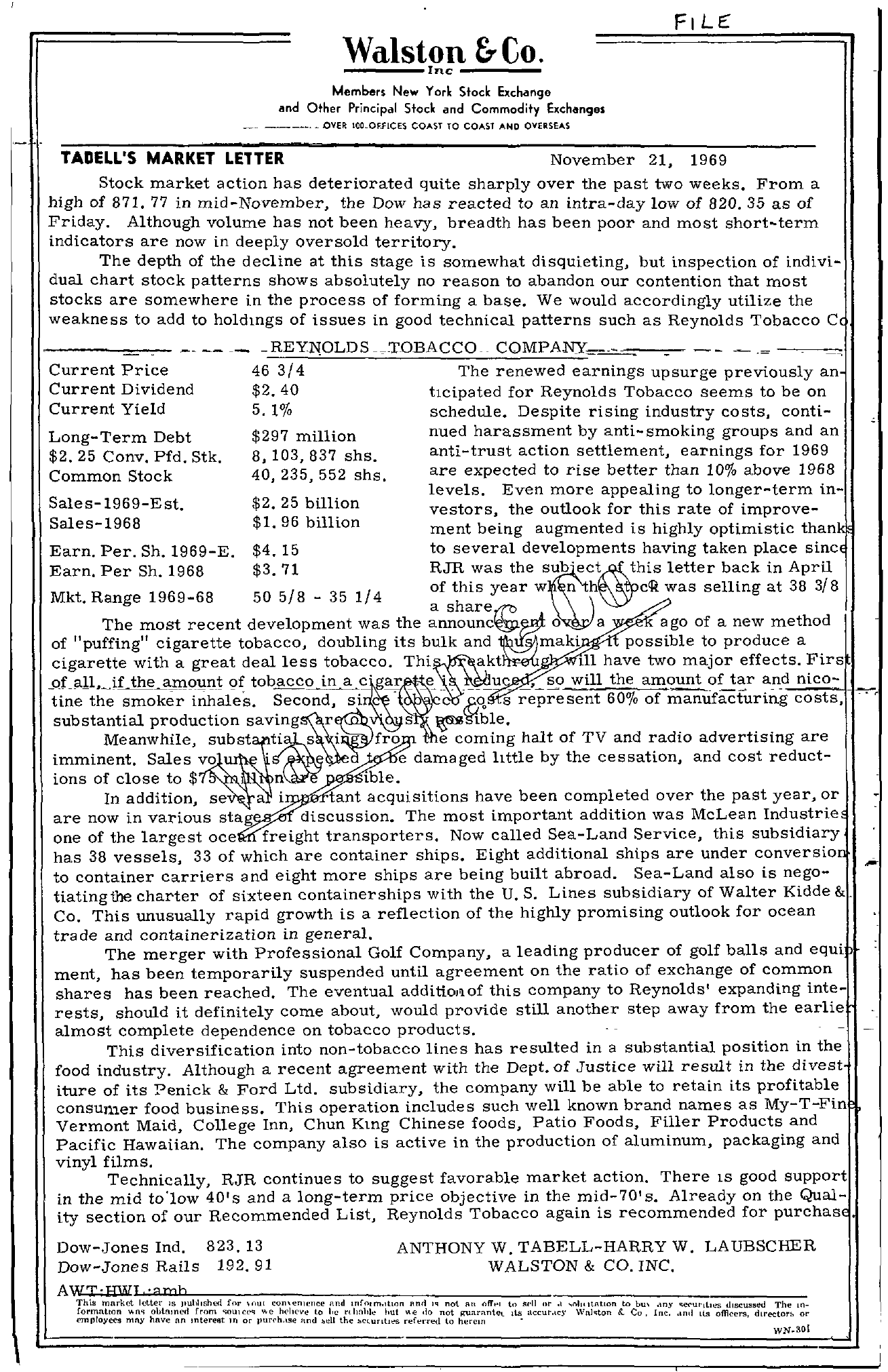 Walston &Co. ———Inc ——–Members New York Stock Exchange and Other Principal Stock and Commodity Exchanges OVER l000F.FICES COAST TO COAST AND OVERSEAS TADELL'S MARKET LETTER November 21, 1969 Stock market action has deteriorated quite sharply over the past two weeks. From a high of 871. 77 in mid-November, the Dow has reacted to an intra-day low of 820. 35 as of Friday. Although volume has not been heavy, breadth has been poor and most short-term indicators are now in deeply oversold territory. The depth of the decline at this stage is somewhat disquieting, but inspection of individual chart stock patterns shows absolutely no reason to abandon our contention that most stocks are somewhere in the process of forming a base. We would accordingly utilize the weakness to add to holdtngs of issues in good technical patterns such as Reynolds Tobacco C — – REYNOLDS TOBACCO. COMPANY — – – –,-,11 Current Price Current Dividend Current Yield 46 3/4 2.40 5.1 The renewed earnings upsurge previously an hCipated for Reynolds Tobacco seems to be on schedule. Despite rising industry costs, conti- Long-Term Debt 2.25 Conv. Pfd. Stk. Common Stock Sales-1969-E st. Sales-1968 297 million 8, 103, 837 shs. 40,235,552 shs. 2. 25 billion 1. 96 billion nued harassment by anti-smoking groups and an anti-trust action settlement, earnings for 1969 are expected to rise better than 10 above 1968 levels. Even more appealing to longer-term investors, the outlook for this rate of improvement being augmented is highly optimistic than Earn. Per. Sh. 1969-E. 4. 15 to several developments having taken place sinc Earn. Per Sh. 1968 3.71 RJR was the letter back in April Mkt. Range 1969-68 50 5/8 35 1/4 of this year w n h a sharerfb The most recent development was the 0a cR was selling at 38 3/8 ago of a new method of puffing cigarette tobacco, doubling its bulk and possible to produce a cigarette with a great deal less tobacco. 111 have two major effects. Firs the.-E-.ffi()1,lnt of tobacco in a tine the smoker irlhaleS. Second, si — u , so will the amount of tar and nicos represent 60 of ffiaiiUfacturing costs, substantial production ,s Meanwhile, 4 i Ust b s i fro e coming halt of TV and radio advertising are imminent. Sales vo u ' e damaged httle by the cessation, and cost reduct- ions of close to ne 1ble. In addition, se a i tant acquisitions have been completed over the past year, or are now in various stag discussion. The most important addition was McLean Industrie one of the largest oce freight transporters. Now called Sea-Land Service, this subsidiary has 38 vessels, 33 of which are container ships. Eight additional ships are under conversio to container carriers and eight more ships are being built abroad. Sea-Land also is nego- tiatingthe charter of sixteen containerships with the U. S. Lines subsidiary of Walter Kidde & Co. This unusually rapid growth is a reflection of the highly promising outlook for ocean trade and containerization in general. The merger with Professional Golf Company, a leading producer of golf balls and equi ment, has been temporarily suspended until agreement on the ratio of exchange of common shares has been reached. The eventual additio'lof this company to Reynolds' expanding inte- rests, should it definitely come about, would provide still another step away from the earlie almost complete dependence on tobacco products. This diversification into non-tobacco lines has resulted in a substantial position in the food industry. Although a recent agreement with the Dept. of Justice will result in the divest iture of its Penick & Ford Ltd. subsidiary, the company will be able to retain its profitable consumer food business. This operation includes such well known brand names as My-T-Fin Vermont Maid, College Inn, Chun Kmg Chinese foods, Patio Foods, Filler Products and Pacific Hawaiian. The company also is active in the production of aluminum, packaging and vinyl films. Technically, RJR continues to suggest favorable market action. There 1S good support in the mid to'low 40's and a long-term price objective in the mid-70's. Already on the Quality section of our Recommended List, Reynolds Tobacco again is recommended for purchas – Dow-Jones Ind. 823. 13 Dow-Jones Rails 192. 91 ANTHONY W. TABELL-HARRY W. LAUBSCHER WALSTON & CO. INC. AWT,m3J '8 m b This market letter lS )lulJllsheri for find Infolmdtlll1 IInri not 1\11 off..t tn or ,I ..,olultatlon to bu\ .lny dlscusst'tl The In- formatIOn …. n'l ohtnmcd from .,OUICt' v.e h'li('v,. to ,,. rdmhl,. hut …. e do not guarantel Its lIccur,lcy 8.. Co. Inc. ,lnd ts ffi d t employees mny hnve nn Illterest In or JJUuh.lSe liml !cll the !elUrLtles referred to herem L 0 leers, Irec or! or WN.301