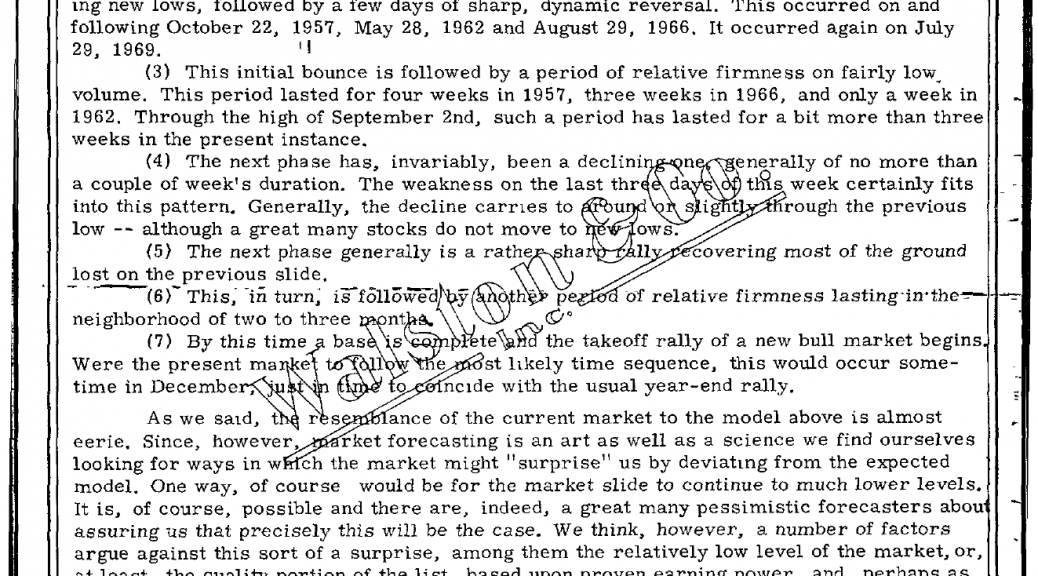 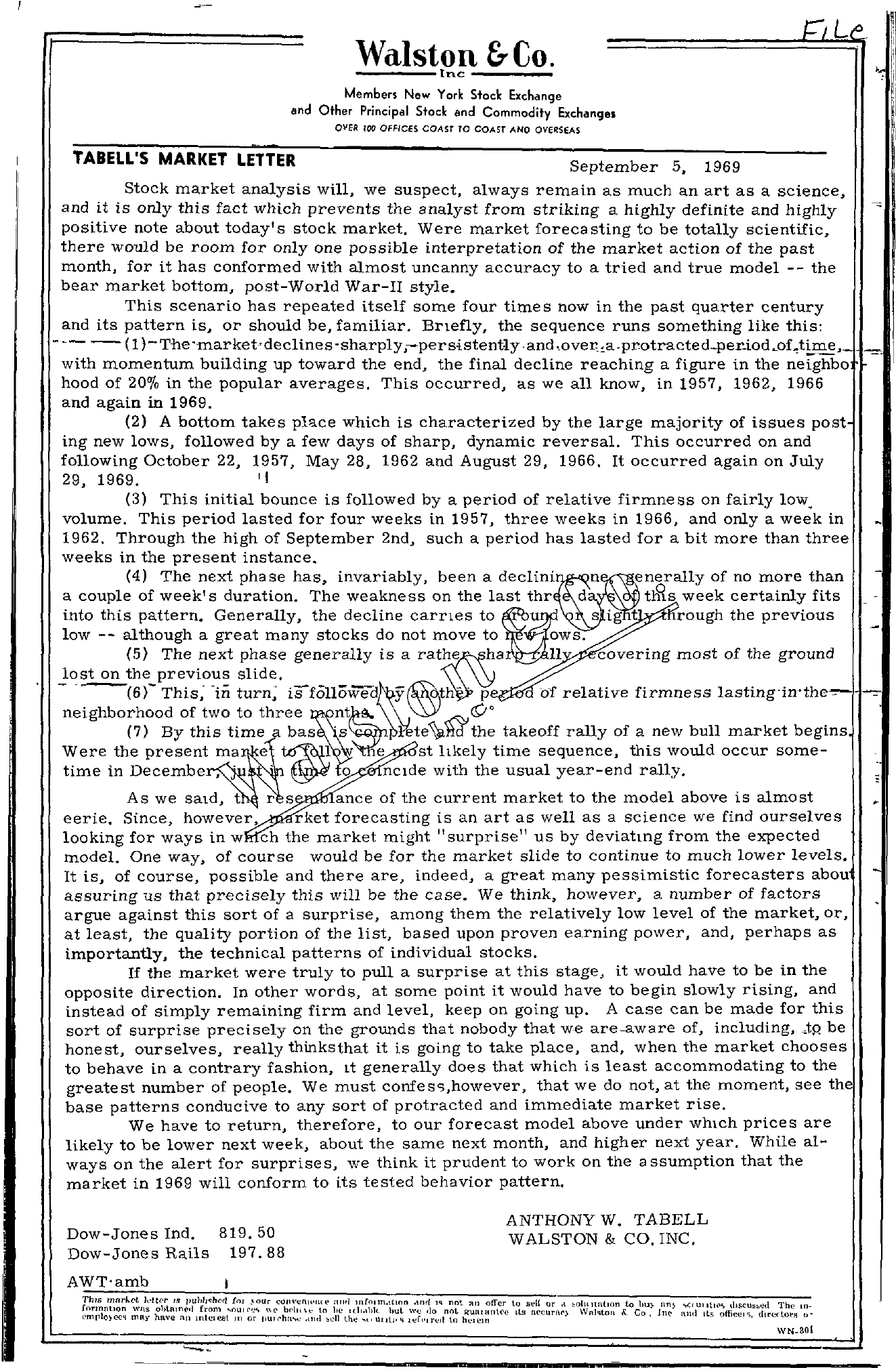 Walston &- Co. —–Inc –……;;….;;… Members New York Stock Exchange and Other Principal Stock and Commodity Exchange. OVER 100 OFFICES COAST TO COAST ANO OVERSEAS TABELL'S MARKET LETTER September 5, 1969 Stock market analysis will, we suspect, always remain as much an art as a science, and it is only this fact which prevents the analyst from striking a highly definite and highly positive note about today's stock market. Were market forecasting to be totally sCientific, there would be room for only one possible interpretation of the market action of the past month, for it has conformed with almost uncanny accuracy to a tried and true model — the bear market bottom, post-World War-II style. This scenario has repeated itself some four times now in the past quarter century and its pattern is, or should be, familiar. Bnefly, the sequence runs something like this – — — (1)-The'marketdeclines'sharp1y,-persIstently-and .over,a.protractedper.iodof.time,. with momentum building up toward the end, the final decline reaching a figure in the n'eighbo — hood of 200/0 in the popular averages. This occurred, as we all know, in 1957, 1962, 1966 and again in 1969. (2) A bottom takes place which is characterized by the large majority of issues post ing new lows, followed by a few days of sharp, dynamic reversal. This occurred on and following October 22, 1957, May 28, 1962 and August 29, 1966. It occurred again on July 29, 1969. '! (3) This initial bounce is followed by a period of relative firmness on fairly low. volume. This period lasted for four weeks in 1957, three weeks in 1966, and only a week in 1962. Through the high of September 2nd, such a period has lasted for a bit more than three weeks in the present instance. (4) The next phase has, invariably, been a a couple of week's duration. The weakness on the last thr ainto this pattern. Generally, the decline carrles to of no more than d thqs week certainly fits s ig t rough the previous low — although a great many stocks do not move to ows. (5) The next phase generally is a ha 11 covering most of the ground lost on the previous slide. – (6f This; 'in turn; neighborhood of two to three (7) By this time a bas s p of relative firmness . W !yo the takeoff rally of a new bull market begins Were the e time in Decembe , . I e st likely time sequence, this would occur some0 nClde with the usual year-end rally. As we sald, t r s ance of the current market to the model above is almost eerie. Since, however, rket forecasting is an art as well as a science we find ourselves looking for ways in w ch the market might surprise us by deviatmg from the expected model. One way, of course would be for the market slide to continue to much lower levels. It is, of course, possible and there are, indeed, a great many pessimistic forecasters abou assuring us that precisely this will be the case. We think, however, a number of factors argue against this sort of a surprise, among them the relatively low level of the market, or, at least, the quality portion of the list, based upon proven earning power, and, perhaps as importantly, the technical patterns of individual stocks. If the market were truly to pull a surprise at this stage, it would have to be in the opposite direction. In other words, at some point it would have to begin slowly rising, and instead of simply remaining firm and level, keep on going up. A case can be made for this sort of surprise precisely on the grounds that nobody that we areaware of, including, be honest, ourselves, really thinks that it is going to take place, and, when the market chooses to behave in a contrary fashion, lt generally does that which is least accommodating to the greatest number of people. We must confess,however, that we do not, at the moment, see the base patterns conducive to any sort of protracted and immediate market rise. We have to return, therefore, to our forecast model above under which prices are likely to be lower next week, about the same next month, and higher next year. While al- ways on the alert for surprises, we think it prudent to work on the a ssumption that the market in 1969 will conform to its tested behavior pattern. Dow-Jones Ind. 819.50 Dow-Jones Rails 197.88 ANTHONY W. TABELL WALSTON & CO. INC. AWT'amb ThIS market, iettcr IS Jlllhh1h''(j fm C'on\'cn1l1rl' ;lllf/ mrllm.lt!on .\lU( 1; not lUI offer to sel! or ,orm,ntlon \\I\s ohtmnt',1 from \\(' \)(11'\; to he 1(Ii.lhk hut we rio not Its n('cUrlH') mny have an mtel eat III or I'U! ,..ha,oJ .Uld bdl '.' Ullt!. lef!'! rc,1 to helclIl tQ hu &. Co, Jnt' '';'Ullt., Th !l1I0i Its offict'l'l dlrc(t e Ln. ' orH u WN301