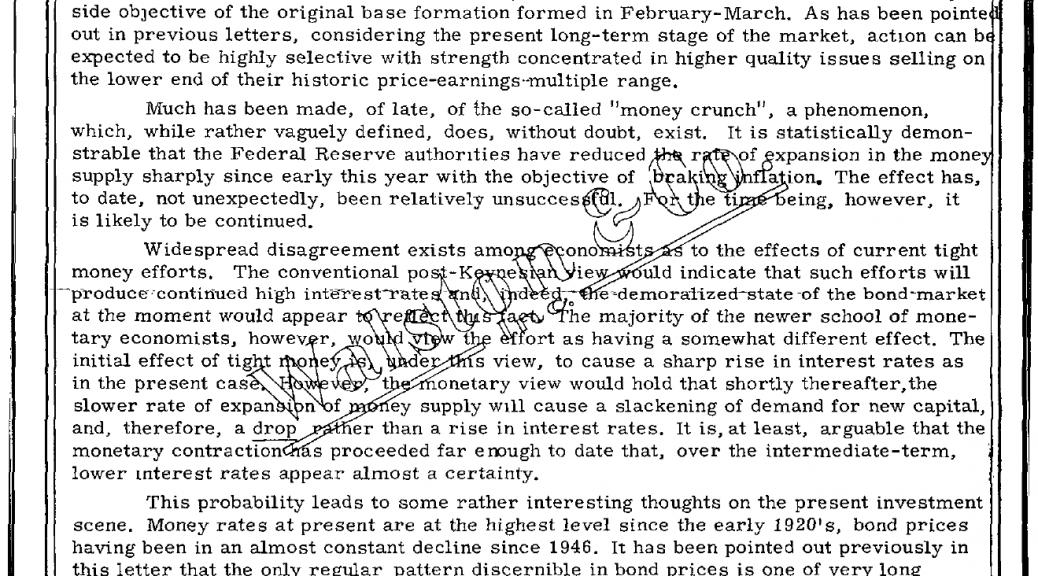 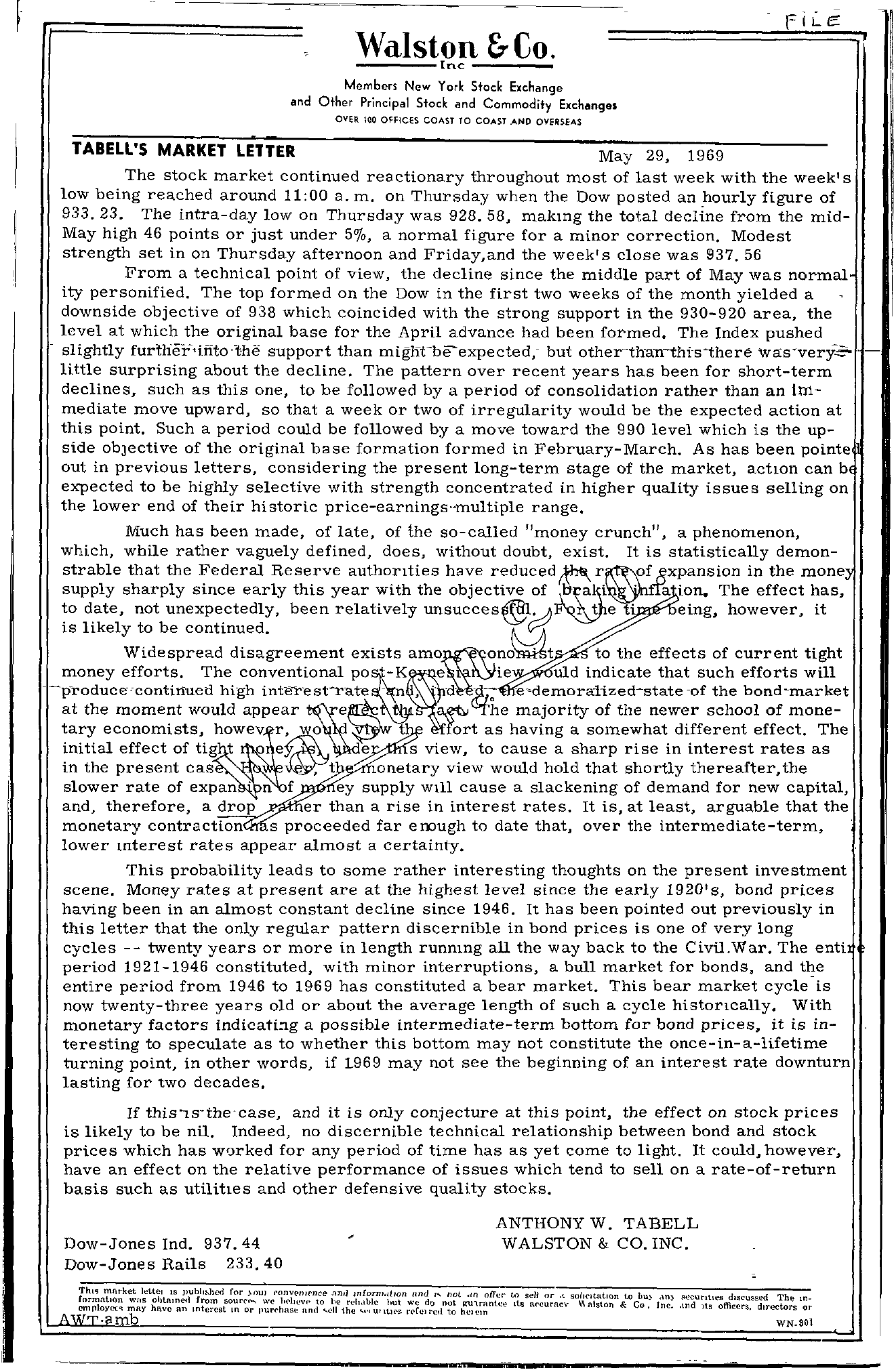 Walston &- Co. – – – – – I n c – – – f i L e Members New York Stock Exchange and Other Principal Stock and Commodity Exchange. OVER 100 OffICES COAST TO COAST AND OVERSEAS TABELL'S MARKET LETTER May 29, 1969 The stock market continued reactionary throughout most of last week with the week's low being reached around 1100 a. m. on Thursday when the Dow posted an hourly figure of 933.23. The intra-day low on Thursday was 928.58, maklllg the total decline from the mid- May high 46 points or just under 50/0, a normal figure for a minor correction. Modest strength set in on Thursday afternoon and Friday,and the week's close was 1937.56 From a technical point of view, the decline since the middle part of May was normal ity personified. The top formed on the Dow in the first two weeks of the month yielded a downside objective of 938 which coincided with the strong support in the 930-920 area, the level at which the original base for the April advance had been formed. The Index pushed slightly further-'ifito,the support than mignCbeexpected,- but otherthan–thisthere wasverY,-little surprising about the decline. The pattern over recent years has been for short-term declines, such as this one, to be followed by a period of consolidation rather than an Immediate move upward, so that a week or two of irregularity would be the expected action at this pOint. Such a period could be followed by a move toward the 990 level which is the upside objective of the original base formation formed in February-March. As has been pointe out in previous letters, conSidering the present long-term stage of the market, act LOn can b expected to be highly selective with strength concentrated in higher quality issues selling on the lower end of their historic price-earnings-multiple range. Much has been made, of late, of the so-called money crunch, a phenomenon, which, while rather vaguely defined, does, without doubt, exist. It is statistically demon- strable that the Federal Reserve authorlties have reduced xxpansion in the mone supply sharply since early this year with the objective ion. The effect has, to date, not unexpectedly, been relatively is likely to be continued. 1\ V;f ti eing, however, it Widespread disagreement exists to the effects of current tight money efforts. The conventional ie uld indicate that such efforts will –p-roduce–contiriued high interest-rate – n , .. -d- '1'0 -edemoraiized-state -of the bondmarket at the moment would appear majority of the newer school of mone- taryeconomists, howev t as having a somewhat different effect. The initial effect of tig t e e s view, to cause a sharp rise in interest rates as in the present cas ,t onetary view would hold that shortly thereafter,the slower rate of expan . n f ey supply wlll cause a slackening of demand for new capital, and, therefore, a drop er than a rise in interest rates. It is, at least, arguable that the monetary contraction s proceeded far e mugh to date that, over the intermediate-term, lower lllterest rates appear almost a certainty. This probability leads to some rather interesting thoughts on the present investment scene. Money rates at present are at the highest level since the early 1920's, bond prices having been in an almost constant decline since 1946. It has been pointed out previously in this letter that the only regular pattern discernible in bond prices is one of very long cycles — twenty years or more in length runmng all the way back to the Civil.War. The enti period 1921-1946 constituted, with minor interruptions, a bull market for bonds, and the entire period from 1946 to 1969 has constituted a bear market. This bear market cycle is now twenty-three years old or about the average length of such a cycle historlcally. With monetary factors indicatiJ.g a possible intermediate-term bottom for bond prices, it is interesting to speculate as to whether this bottom may not constitute the once-in-a-lifetime turning pOint, in other words, if 1969 may not see the beginning of an interest rate downturn lasting for two decades. If this,s-thecase, and it is only conjecture at this point, the effect on stock prices is likely to be nil. Indeed, no discernible technical relationship between bond and stock prices which has worked for any period of time has as yet come to light. It could, however, have an effect on the relative performance of issues which tend to sell on a rate-of-return basis such as utilities and other defensive quality stocks. Dow-Jones Ind. 937.44 Dow-Jones Rails 233.40 ANTHONY W. TABELL WALSTON & CO. INC. Thl'5 mnrkct Jettel IS l)uhln,hed for ).OUl f'OnV!..nI('nce Jllllj mfDrm.dlon Iwd ' not .HI offer to sell or sollclt.atlon to Lu\ In) i .ormation WitS ohtmne(l from soure' w(' hf'h('v. to be rl'h.lhlc hut we do not 1(U1.rnnt('c It6 R('curacy alston & C . dISCUS tod Th I t ffi sd In- may have an Interest In or pur('has' nnd …ell the 'UlltH'S r('rl!lrcd to hClcln ' o. nco .In( ISO ccrs. ITLctors or . mb WN.SO\