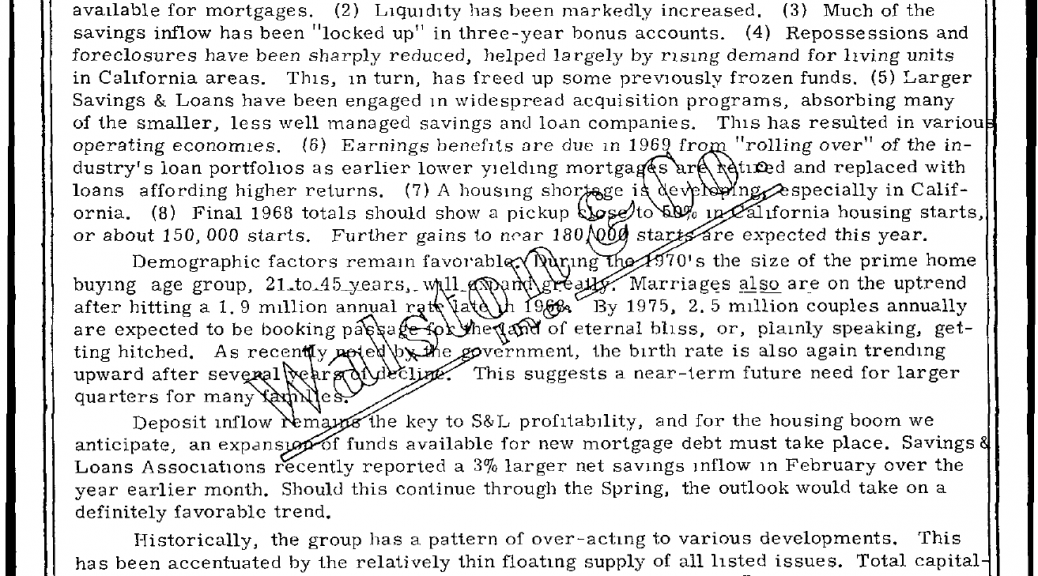 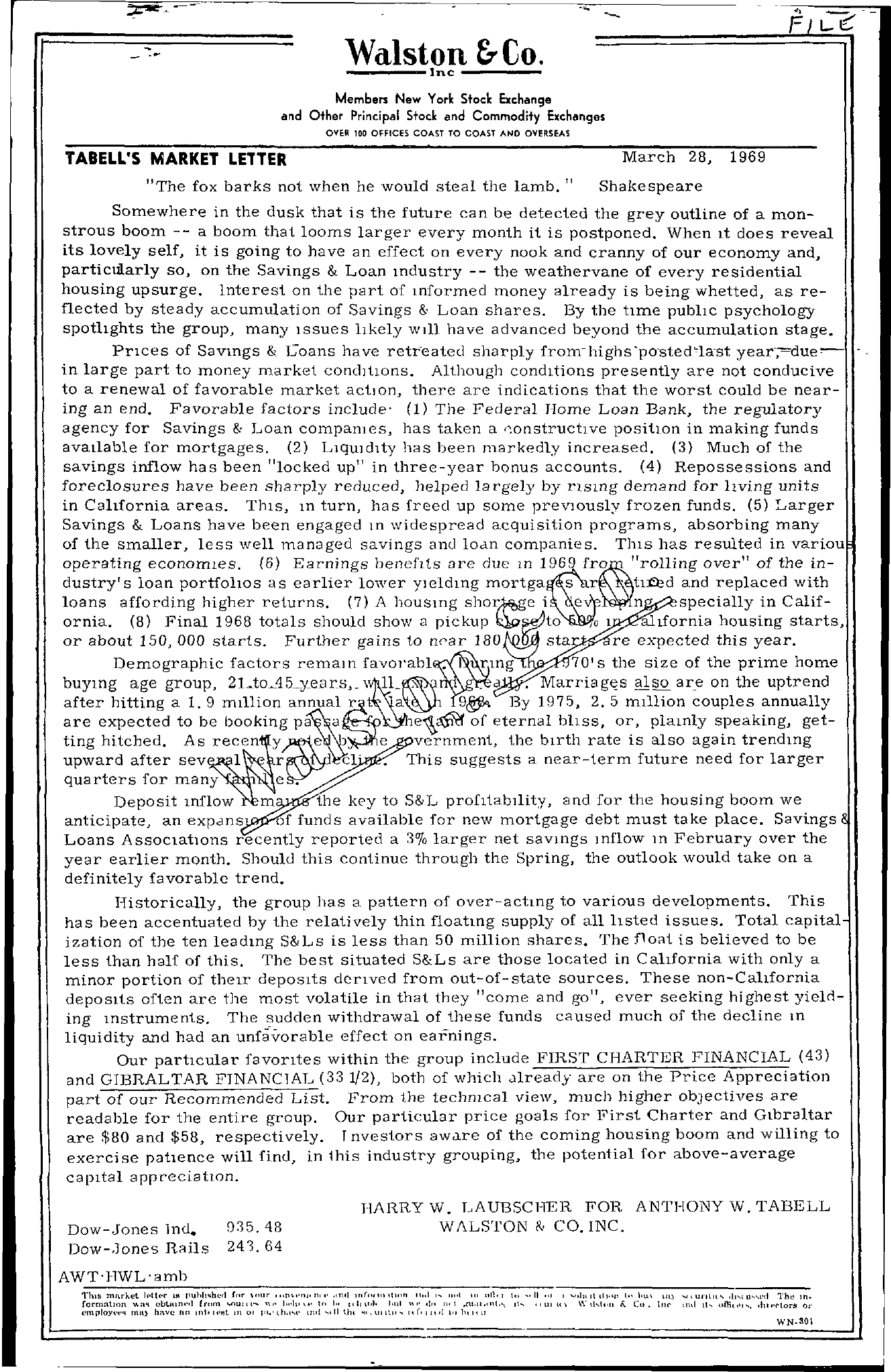 Walston &- Co. Members New York Stock Exchange and Other Principal Stock and Commodity Exchanges OVER 100 OFFICES COAST TO COAST AND OVERSEAS TABEll'S MARKET lETTER March 28, 1969 The fox barks not when he would steal the lamb. Shakespeare Somewhere in the dusk that is the future can be detected the grey outline of a monstrous boom — a boom that looms larger every month it is postponed. When it does reveal its lovely self, it is going to have an effect on every nook and cranny of our economy and, particlilarly so, on the Savings & Loan Industry — the weathervane of every residential housing upsurge. Interest on the part of Informed money already is being whetted, as reflected by steady accumulation of Savings & Loan shares. By the hme public psychology spotlights the group, many Issues likely Will have advanced beyond the accumulation stage. Prices of Savings & Coans have sharply – in large part to money market condItions. Although conditions presently are not conducive to a renewal of favorable market actIOn, there are indications that the worst could be near- ing an end. Favorable factors include' (1) The Federal Home Loan Bank, the regulatory agency for Savings & Loan compames, has taken a .onstruchve positIOn in making funds available for mortgages. (2) LiqUidity has been markedly increased. (3) Much of the savings inflow has been locked up in three-year bonus accounts. (4) Repossessions and foreclosures have been sharply reduced, helped largely by rlsmg demand for hving units in California areas. ThiS, In turn, has freed up some prevlOusly frozen funds. (5) Larger Savings & Loans have been engaged In widespread acquisition programs, absorbing many of the smaller, less well managed savings and loan companies. T1ns has resulted in variou operating economies. (6) Earnings benefIts are due m 1969 over of the in- dustry's loan portfolios a s earlier lower Yleldmg hfed and replaced with loans affording higher returns. (7) A hOUSing shor,ge i e n specially in Calif- ornia. (8) Final 1968 totals should show a pickup 10 I ahfornia housing starts, or about 150,000 starts. Further gains to nrar 180 llij star re expected this year. Demographic factors remain . 70' s the size of the prime home buymg age group, after hitting a 1. 9 million annual; are expected to be booking ting hitched. As recen e upward after sev 1 r cl. .a . are on the uptrend By 1975, 2.5 mIllion couples annually of eternal bliss, or, plainly speaking, get- vernment, the birth rate is also again trendmg This suggests a near-term future need for larger quarters for many e. Deposit Inflow m the key to S&L profItability, and for the hOUSing boom we anticipate, an expans of funds available for new mortgage debt must take place. Savings Loans ASSOCIatIOns recently reported a 3 larger net savmgs Inflow m February over the year earlier month. Should this continue through the Spring, the outlook would take on a definitely favorable trend. Historically, the group has a pattern of over-acting to various developments. This has been accentuated by the relatively thin floatIng supply of all lIsted issues. Total capital ization of the ten leadIng S&Ls is less than 50 million shares. The fl08t is believed to be less than half of this. The best situated S&Ls are those located in Cahfornia with only a minor portion of theIr depOSIts derIved from out-of-state sources. These non-CalIfornia depOSIts often are the most volatile in that they come and go, ever seeking highest yielcting Instruments. The sudden withdrawal of these funds caused much of the decline m liquidity and had an unfavorable effect on earnings. Our partIcular faVOrItes within the group include FIRST CHARTER FINANCIAL (43) and GIBRALTAR FINANC1AL (33 1/2), bot11 of which Jlready are on the Price Appreciation part of our Recommended List. From the techmcal view, much higher obJectives are readable for the entire group. Our particular price goals for First Charter and GIbraltar are 80 and 58, respectively. r nvestors aw.tre of the coming housing boom and willing to exerci se patIence will find, in ihis industry grouping, the potential for above-average capItal appreciatIOn. Dow-Sones lnd. 035.48 Dow-.Jones R8ils 24'3. 64 HARRY W. LAUBSCl-lEIl. FOIl. ANTHONY W. TABELL WALSTON & CO. INC. AWT'HWL'amb ThiS mnrket !'th'r III p\lhh'lhed or \ur ,,,I\H'nj.l1t' \11'1 ll,f,m'(I1l I, .. ,,1 III Il.j \ … 11 I ',,ullllll1 I I'ul e.. ,formntmn …. 1\'1 obtnln, frllm ,,111,1' (' 1,,111' In I.. 1'111.1. I.ul ,. ,! n,1 ..'Il.l!.,njc ,t … (IUII,\ \\-11 .. \ InC' mil) have lin III 01 1'1lh,I … lnd ..,II th, r'I'o h,ltll ',Ilnill The In In.! It-. flit, .., ,luN'lors or WN301