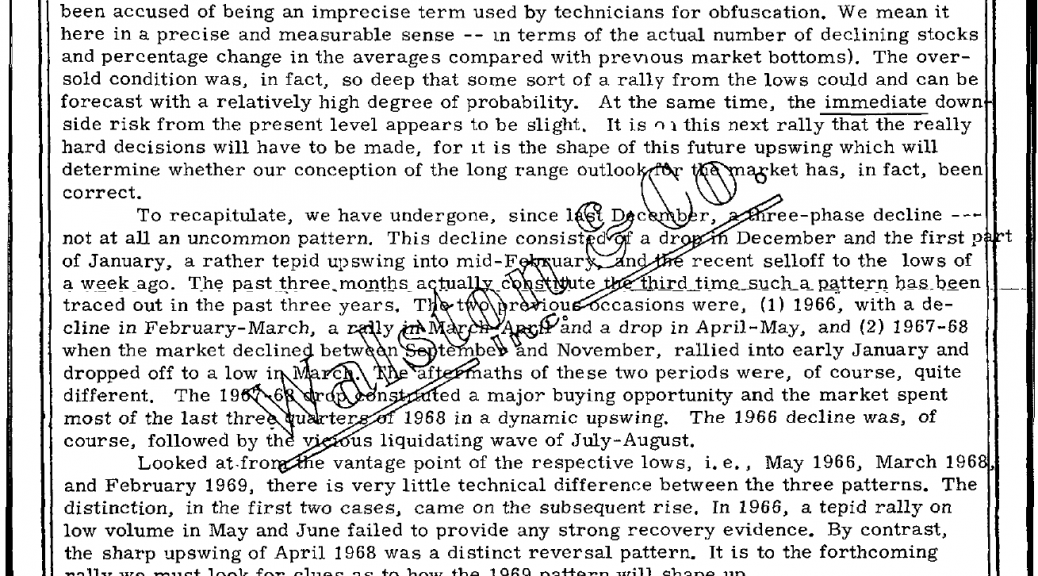 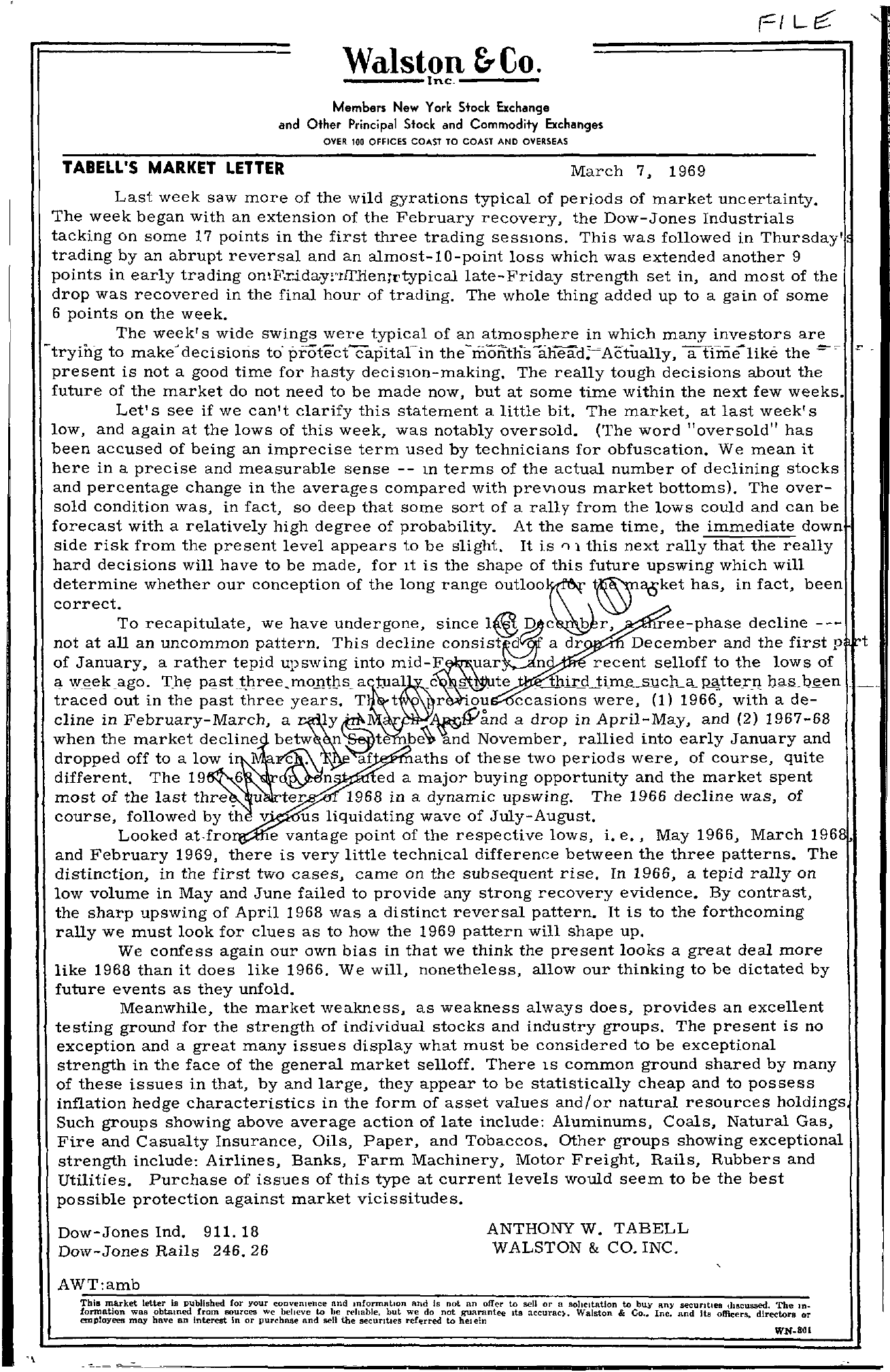 r-I Walston &- Co. lnc' – – – – – Members New York Stock Exchange and Other Principal Stock and Commodity Exchanges OVER 100 OFFICES COAST TO COAST AND OVERSEAS TAB Ell'S MARKET lETTER March 7, 1969 Last week saw more of the wild gyrations typical of periods of market uncertainty. The week began with an extension of the February recovery, the Dow-Jones Industrials tacking on some 17 points in the first three trading seSSlOns. This was followed in Thursday' trading by an abrupt reversal and an almost-10-point loss which was extended another 9 points in early trading omF.rlda,y;rITlienj(Ctypical late- Friday strength set in, and most of the drop was recovered in the final hour of trading. The whole thing added up to a gain of some 6 points on the week. The week's wide swings were typical of an atmosphere in which many investors are -trying to decisions to' protectcapitalin the -Actually, a hmelike the — present is not a good time for hasty decislOn-making. The really tough decisions about the future of the market do not need to be made now, but at some time within the next few weeks. Let's see if we can't clarify this statement a little bit. The market, at last week's low, and again at the lows of this week, was notably oversold. (The word oversold has been accused of being an imprecise term used by technicians for obfuscation. We mean it here in a precise and measurable sense — In terms of the actual number of declining stocks and percentage change in the averages compared with prevlOus market bottoms). The over- sold condition was, in fact, so deep that some sort of a rally from the lows could and can be forecast with a relatively high degree of probability. At the same time, the immediate down side risk from the present level appears to be slight. It is ') 1 this next rally that the really hard decisions will have to be made, for it is the shape of this future upswing which will determine whether our conception of the long range has, in fact, been correct. .'\,)J To recapitulate, we have undergone, since b r, ree-phase decline — not at all an uncommon pattern. This decline a dr December and the first p of January, a rather tepid upswing into recent selloff to the lows of a T,he p,!st1,hree,mOl!tDs al c , Ra,ttern traced out in the past three years. T t r 'ou ccasions were, (1) 1966, with a de- cline in February-March, a a drop in April-May, and (2) 1967-68 when the market decline betw and November, rallied into early January and dropped off to a low i af aths of these two periods were, of course, quite different. The 19 6 ed a major buying opportunity and the market spent most of the last thre ter. 1968 in a dynamic upswing. The 1966 decline was, of course, followed by th v us liquidating wave of July-August. Looked at,fro e vantage point of the respective lows, i. e., May 1966, March 196 and February 1969, there is very little technical difference between the three patterns. The distinction, in the first two cases, came on the subsequent rise. In 1966, a tepid rally on low volume in May and June failed to provide any strong recovery evidence. By contrast, the sharp upswing of April 1968 was a distinct reversal pattern. It is to the forthcoming rally we must look for clue s as to how the 1969 pattern will shape up. We confess again our own bias in that we think the present looks a great deal more like 1968 than it does like 1966. We will, nonetheless, allow our thinking to be dictated by future events as they unfold. Meanwhile, the market weakness, as weakness always does, provides an excellent testing ground for the strength of individual stocks and industry groups. The present is no exception and a great many issues display what must be considered to be exceptional strength in the face of the general market selloff. There is common ground shared by many of these issues in that, by and large, they appear to be statistically cheap and to possess inflation hedge characteristics in the form of asset values and/or natural resources holdings Such groups showing above average action of late include Aluminums, Coals, Natural Gas, Fire and Ca.sualty Insurance, Oils, Paper, and Tobaccos. Other groups showing exceptional strength include Airlines, Banks, Farm Machinery, Motor Freight, Rails, Rubbers and Utilities. Purchase of issues of this type a.t current levels would seem to be the best possible protection against market vicissitudes. t Dow-Jones Ind. 911. 18 Dow-Jones Rails 246. 26 ANTHONY W. TABELL WALSTON & CO. INC. AWTamb Thill market letter is p'Ubllshed for your convenumee nnd mforml!.t.lon ll.11d Is not an offer to sell or a sollcLtation to buy an)' secur.tlefl thscussed. The information was obtained from sources We betu!ve to be nhable. but we do not guarantee Its accurac). Walston & Co. Inc. and its officers. directors or employees may have an Interest in or purchase and sell the secuntle5 referred to hel ein WN801 ,, w