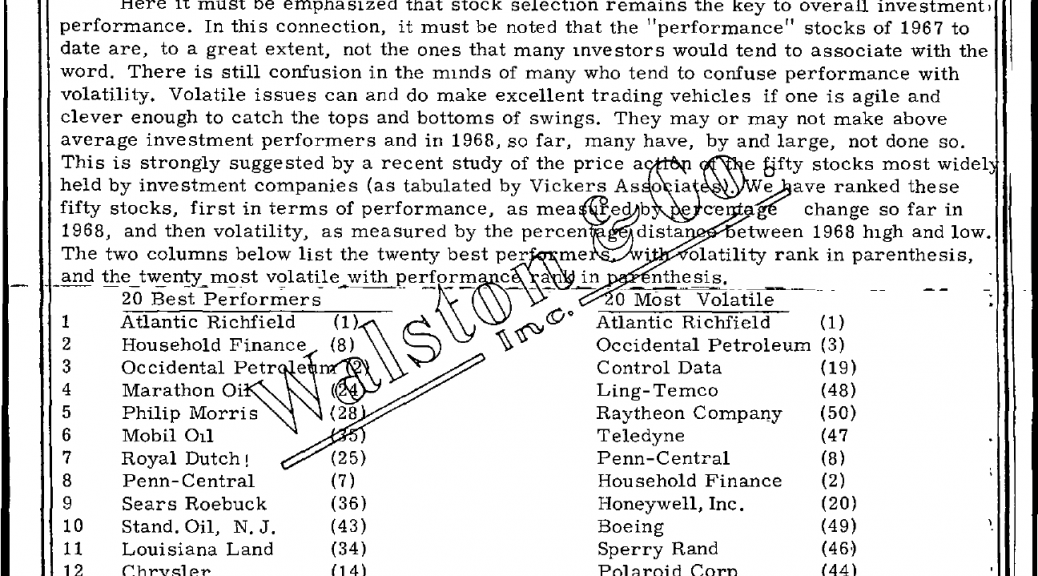 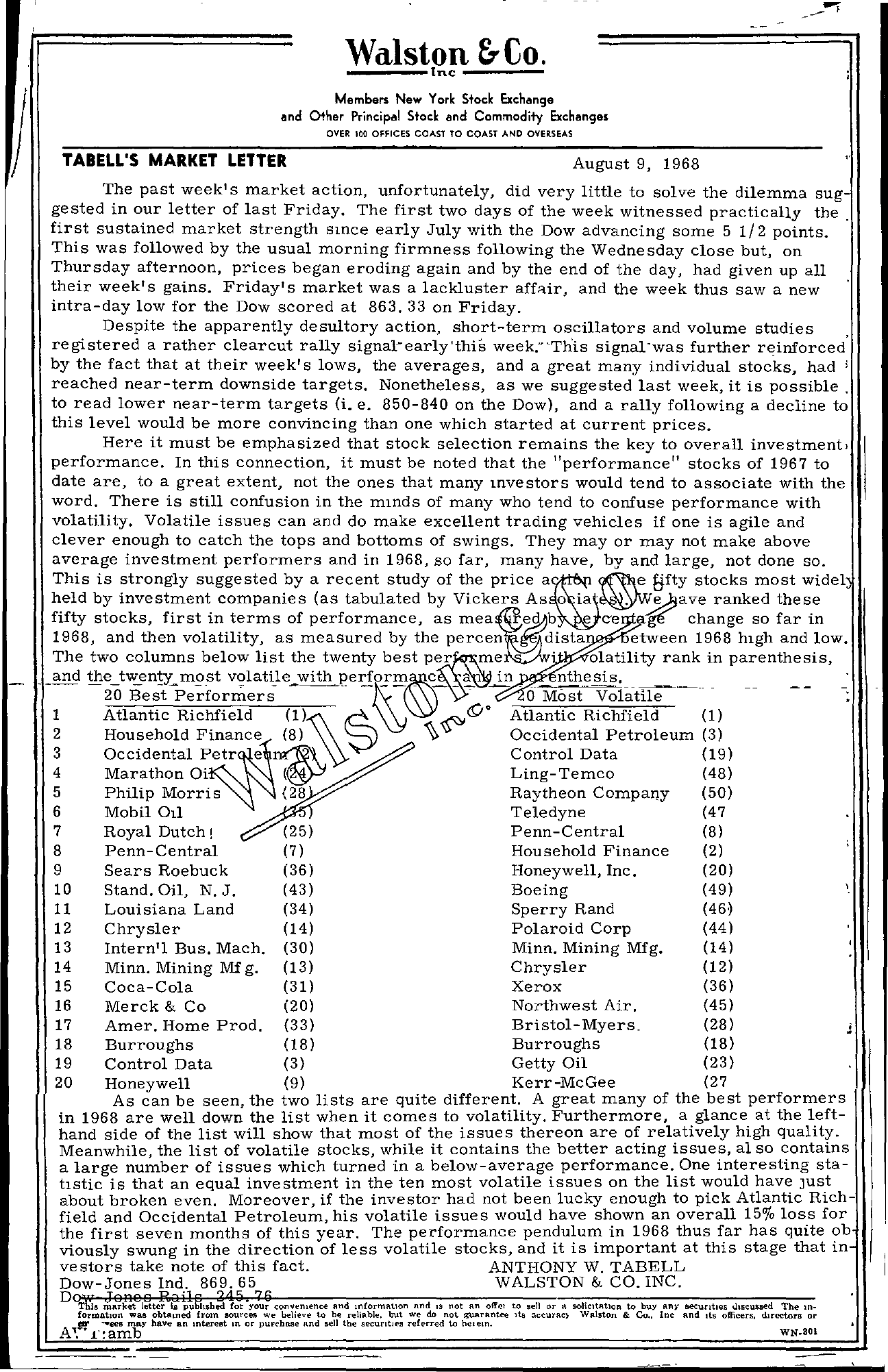 Walston &Co, ..;..,;..;;.;,;;;;.. 1n.c Members New York Stock Exchange and Other Principal Stock and Commodity Exchanges OVER 100 OFFICES COAST TO COAST ANO OVERSEAS TABELL'S MARKET LETTER August 9, 1968 The past week's market action, unfortunately, did very little to solve the dilemma sug- gested in our letter of last Friday. The first two days of the week witnessed practically the. first sustained market strength smce early July with the Dow advancing some 5 1/2 points. This was followed by the usual morning firmness following the Wednesday close but, on Thursday afternoon, prices began eroding again and by the end of the day, had given up all their week's gains. Friday's market was a lackluster afflir, and the week thus saw a new intra-day low for the Dow scored at 863. 33 on Friday. Despite the apparently desultory action, short-term oscillators and volume studies . registered a rather clearcut rally signaJ-early'this week.–This Signal-was further reinforced by the fact that at their week's lows, the averages, and a great many individual stocks, had; reached near-term downside targets. Nonetheless, as we suggested last week, it is possible. to read lower near-term targets (i. e. 850-840 on the Dow), and a rally following a decline to this level would be more convincing than one which started at current prices. Here it must be emphasized that stock selection remains the key to overall investment performance. In this connection, it must be noted that the performance stocks of 1967 to date are, to a great extent, not the ones that many mvestors would tend to associate with the word. There is still confusion in the mmds of many who tend to confuse performance with volatility. Volatile issues can and do make excellent trading vehicles if one is agile and clever enough to catch the tops and bottoms of swings. They mayor may not make above average investment performers and in 1968, so far, many have, by and large, not done so. This is strongly suggested by a recent study of the price &fty stocks most widel, held by investment companies (as tabulated by Vickers As 0 ia ranked these fifty stocks, first in terms of performance, as e Change so far in 1968, and then volatility, as measured by the uetween 1968 hlgh and low. The two columns below the twenty best . olatility rank in parenthesis, 2E nthesls. . 20 Best Performers 0 Most Volatile -. 1 Atlantic Richfield (1) !yo Atlantic Richfield (1) 3 Occidental Petr e Control Data (19) 4 Marathon Oi . Ling-Temco (48) 5 Philip Morris (28 Raytheon CompaI)Y (50) 6 Mobil 011 Teledyne (47 7 Royal Dutch! (25) Penn-Central (8) 8 Penn-Central (7) Household Finance (2) 9 Sears Roebuck (36) Honeywell, Inc. (20) 10 Stand. Oil, N. J. (43) Boeing (49) I. 11 Louisiana Land (34) Sperry Rand (46) 12 Chrysler (14) Polaroid Corp (44) 13 Intern'l Bus. Mach. (30) Minn. Mining Mfg. (14) 14 Minn. Mining Mfg. (13) Chrysler (12) 15 Coca-Cola (31) Xerox (36) 16 Merck & Co (20) Northwest Air. (45) 17 Amer. Home Prod. (33) Bristol-Myers. (28) 18 Burroughs (18) Burroughs (18) 19 Control Data (3) Getty Oil (23) 20 Honeywell (9) Kerr-McGee (27 As can be seen, the two lists are quite different. A great many of the best performers in 1968 are well down the list when it comes to volatility. Furthermore, a glance at the left- hand side of the list will show that most of the issues thereon are of relatively high quality. Meanwhile the list of volatile stocks, while it contains the better acting issues, al so contains a large of issues which turned in a performance .. One interesting sta- tlstic is that an equal investment in the ten most volatile lssues on the llst would have Just about broken even. Moreover, if the investor had not been lucky enough to pick Atlantic Rich- field and Occidental Petroleum his volatile issues would have shown an overall 150/0 loss for the first seven months of this year. The performance pendulum in 1968 thus far has quite ob viously swung in the direction of less volatile stocks, and it is important at this stage that m- vestors take note of this fact. ANTHONY W. TABELL Dow–Iones Lnd, WALSTON & CO. INC. D market letl;(!r Is (or your convenience and mformatlon nnd IS not an offel to sell or a soliCitatIon to buy an)' securities Ihscussed The m. formation was obtl\lned from lIOurces we believe to be reliable. but we do not jfURrantee Its accurac Walston & Co Inc and Its officers, directors or t!! …..eea may have an mterellt an or JuFchase and sell the securltu's referred to helem. A'.' !'amb WN'01