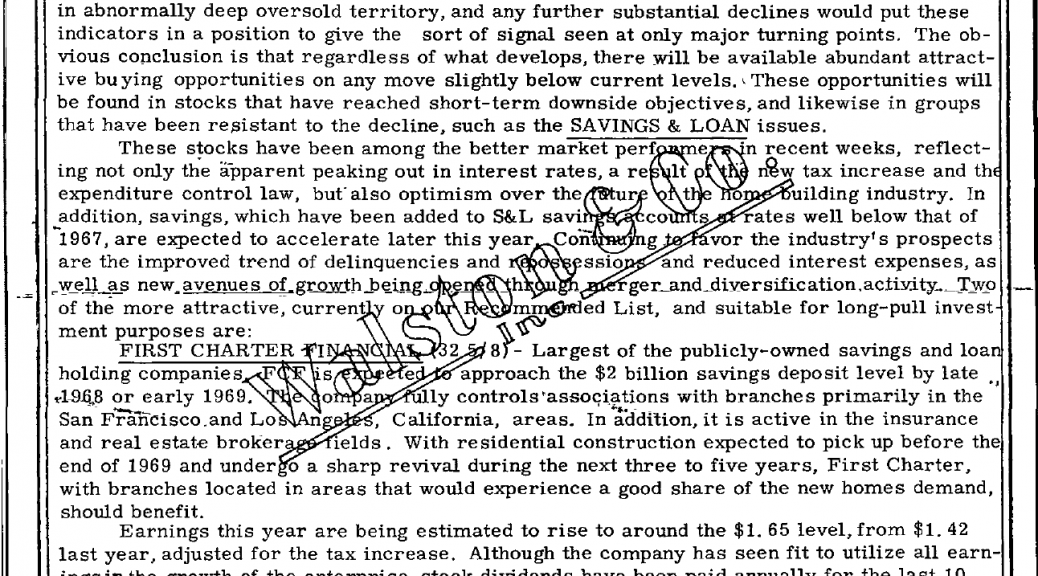 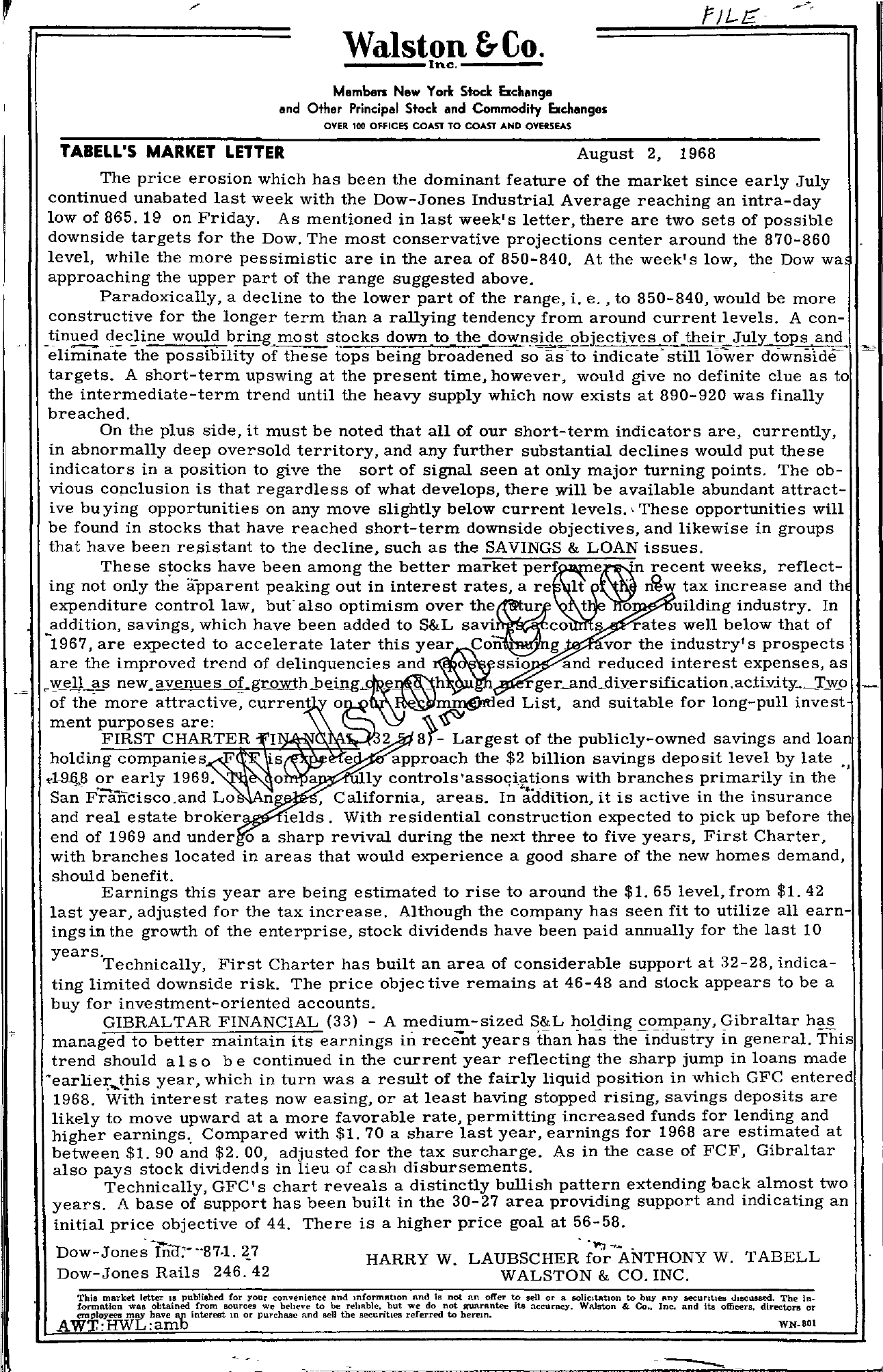 Walston Inc. &Co. Memben New Yor! Stock &chang8 and Other Principal Stock and Commodity &chang8s OVER 100 OffiCES COAST TO COAST AND OVERSEAS TABELL'S MARKET LETTER August 2, 1968 The price erosion which has been the dominant feature of the market since early July continued unabated last week with the Dow-Jones Industrial Average reaching an intra-day low of 865.19 on Friday. As mentioned in last week's letter, there are two sets of possible downside targets for the Dow. The most conservative projections center around the 870-860 level, while the more pessimistic are in the area of 850-840. At the week's low, the Dow wa approaching the upper part of the range suggested above. Paradoxically, a decline to the lower part of the range, i. e. , to 850-840, would be more constructive for the longer term than a rallying tendency from around current levels. A con- would bring most down to the down.sie objectives of their July tops and eliminate the possibility of these tops being broadened so as'to indicate'still lower downside targets. A short-term upswing at the present time, however, would give no definite clue as to the intermediate-term trend until the heavy supply which now exists at 890-920 was finally breached. On the plus Side, it must be noted that all of our short-term indicators are, currently, in abnormally deep oversold territory, and any further substantial declines would put these indicators in a position to give the sort of signal seen at only major turning pOints. The ob- vious conclusion is that regardless of what develops, there will be available abundant attract- ive bu ying opportunities on any move slightly below current levels.' These opportunities will be found in stocks that have reached short-term downside objectives, and likewise in groups that have been resistant to the decline, such as the SAVINGS & LOAN issues. These s!ocks have been among the better market ing not only the apparent peaking out in interest rates, a re lt recent weeks, reflect. tax increase and th expenditure control law, but'also optimism over addition, savings, which have been added to S&L sa . t0 uilding industry. In co sates well below that of -1967, are expected to accelerate later this yeaCorn g. vor the industry's prospects are the improved trend of delinquencies and ssio and reduced interest expenses, as cweJJ.-,!s new,avenues of geranddi'Y'ersification.activ.ity.'I'JVSl of the more attractive, current List, and suitable for long-pull invest ment purposes are FIRST CHARTER I 2 8(- Largest of the publicly-owned savings and loa holding companies approach the 2 billion savings deposit level by late ., .1.9.6.8 or early 1969. ly controls'asso;i.ations with branches primarily in the San Francisco.and Lo California, areas. In addition, it is active in the insurance and real estate broker ields. With residential construction expected to pick up before the end of 1969 and under 0 a sharp revival during the next three to five years, First Charter, with branches located in areas that would experience a good share of the new homes demand, should benefit. Earnings this year are being estimated to rise to around the 1. 65 level, from 1. 42 last year, adjusted for the tax increase. Although the company has seen fit to utilize all earn- ings in the growth of the enterprise, stock dividends have been paid annually for the last 10 years. Technically, First Charter has built an area of considerable support at 32-28, indica- ting limited downside riSk. The price objec tive remains at 46-48 and stock appears to be a buy for investment-oriented accounts. GIBRALTAR FINANCIAL (33) – A medium-sized S&L holding company, Gibraltar managed to better maintain its earnings in recent years than 'ha-stheindustry in general. This trend should a 1sob e continued in the current year reflecting the sharp jump in loans made earlier;,tpis year, which in turn was a result of the fairly liquid position in which GFC entered 1968. With interest rates now easing, or at least having stopped rising, savings deposits are likely to move upward at a more favorable rate, permitting increased funds for and higher earnings .. Compared with 1. 70 a share last year, earnings for 1968 are estimated at between 1. 90 and 2.00, adjusted for the tax surcharge. As in the case of FCF, Gibraltar also pays stock dividends in lieu of cash disbursements. Technically, GFC' s chart reveals a distinctly bullish pattern extending back almost two years. A base of support has been built in the 30-27 area providing support and indicating an '–initial price objective of 44. There is a higher price goal at 56-58. Dow-Jones Ina;- 87-1. … -,. HARRY W. LAUBSCHER for ANTHONY W. TABELL Dow-Jones Rails 246.42 WALSTON & CO. INC. This market letter 18 publlehed (or your convenience and mformatlon nnd is not an offer to sell or a soliCitation to buy any securities lhscu.saed. The In. formation WaR obtained from sources we heheve to be rehnble. but we do nOl its accumc.y. Walston & Co Inc. and its officers, directors or AW'JHWLamOemDIOYee!I m!y have e,p interest m or purchase nnd sell the securities referred to herein. WNBOI