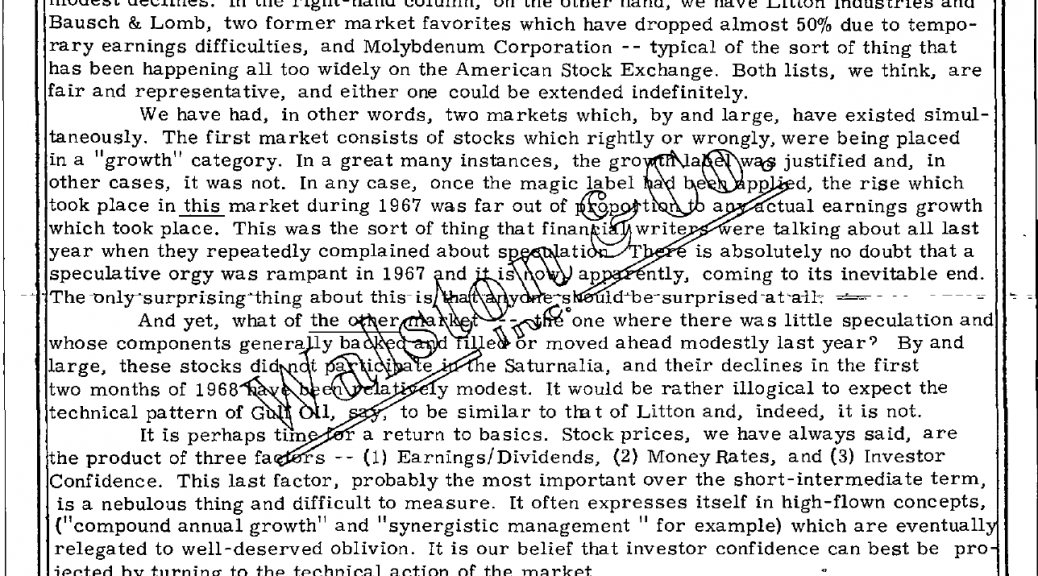 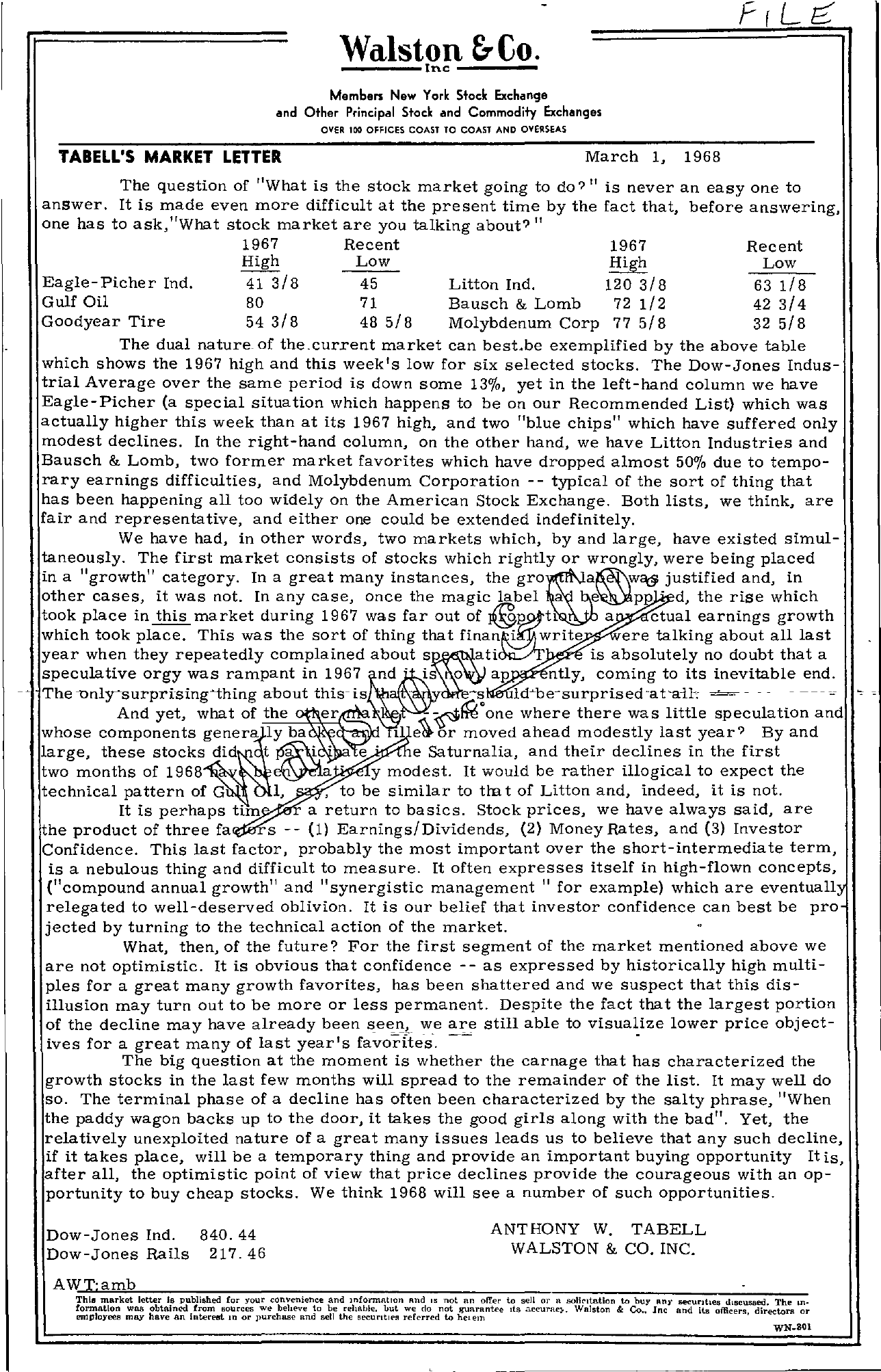 Walston &reo. !nc F( Membe.. New York Stock Exchange and Other Principal Stock and Commodity Exchanges OVER 100 OFFlCES COAST TO COAST AND OVERSEAS TABELL'S MARKET LETTER March 1, 1968 The question of What is the stock market going to do is never an ea sy one to answer. It is made even more difficult at the present time by the fact that, before answering, one has to ask,What stock market are you talking about 1967 High Recent Low 1967 High Recent Low Eagle – Piche rInd. Gulf Oil Goodyear Tire 41 3/8 80 54 3/8 45 71 48 5/8 Litton Ind. 120 3/8 Bausch & Lomb 72 1/2 Molybdenum Corp 77 5/8 63 118 42 3/4 32 5/8 The dual of market can best.be exemplified by the above table which shows the 1967 high and this week's low for six selected stocks. The Dow-Jones Indus- trial Average over the same period is down some 13, yet in the left-hand column we have Eagle- Picher (a special situation which happens to be on our Recommended List) which was actually higher this week than at its 1967 high, and two blue chips which have suffered only modest declines. In the right-hand column, on the other hand, we have Litton Industries and Bausch & Lomb, two former market favorites which have dropped almost 50 due to tempo- rary earnings difficulties, and Molybdenum Corporation – – typical of the sort of thing that has been happening all too widely on the American Stock Exchange. Both lists, we think, are fair and representative, and either one could be extended indefinitely. We have had, in other words, two markets which, by and large, have existed simul- taneously. The first market consists of stocks which rightly or wrongly, were being placed in a growth category. In a great many instances, the justified and, in other cases, it was not. In any case, once the magic label a d, the rise which took place in this market during 1967 was far out of a ctual earnings growth which took place. This was the sort of thing that finan i write ere talking about all last year when they repeatedly complained about s ati is absolutely no doubt that a speculative orgy was rampant in 1967 about this-is is 0 ar. ntly, coming to its inevitable end. . Id-be-surprised'at'a'lh .. – And yet, what of the er one where there was little speculation and whose components genera ly ba 1 e\ or moved ahead modestly last year By and large, these stocks did t .e e Saturnalia, and their declines in the first two months of 1968 y modest. It would be rather illogical to expect the technical pattern of G 1, to be similar to till t of Litton and, indeed, it is not. It is perhaps tim a return to basics. Stock prices, we have always said, are the product of three fa s — (1) Earnings/Dividends, 2 Money Rates, and (3) Investor Confidence. This last factor, probably the most important over the short-intermediate term, is a nebulous thing and difficult to measure. It often expresses itself in high-flown concepts, (compound annual growth and synergistic management for example) which are eventuall relegated to well-deserved oblivion. It is our belief that investor confidence can best be pro jected by turning to the technical action of the market. What, then, of the future For the first segment of the market mentioned above we are not optimistic. It is obvious that confidence — as expressed by historically high multi- ples for a great many growth favorites, has been shattered and we suspect that this dis- illusion may turn out to be more or less permanent. Despite the fact that the largest portion of the decline may have already been seen, we are still able to visualize lower price object- ives for a great many of last year's — . The big question at the moment is whether the carnage that has characterized the growth stocks in the last few months will spread to the remainder of the list. It may well do so. The terminal phase of a decline has often been characterized by the salty phrase, When the paddy wagon backs up to the door, it takes the good girls along with the bad. Yet, the relatively unexploited nature of a great many issues leads us to believe that any such decline, if it takes place, will be a temporary thing and prOVide an important buying opportunity It is, after all, the optimistic point of view that price declines prOVide the courageous with an op- portunity to buy cheap stocks. We think 1968 will see a number of such opportunities. Dow-Jones Ind. 840.44 Dow-Jones Rails 217.46 ANTHONY W. TABELL WALSTON & CO. INC. AWTamb Thin market letter Is published for your convenience and miOTmntlOn Rnd IS not an offer to sell or R soli('ltation to buy Rny se'uTlties discussed. The In. formation was obtained from Bources we beliNe to be rehRble. but we do not guarantee Its enlployee8 may have an Interest In or purchase Rnd sell the aeeuntH.'S rererred to helem Walston & Co. Inc and Its officers, directors or WN801