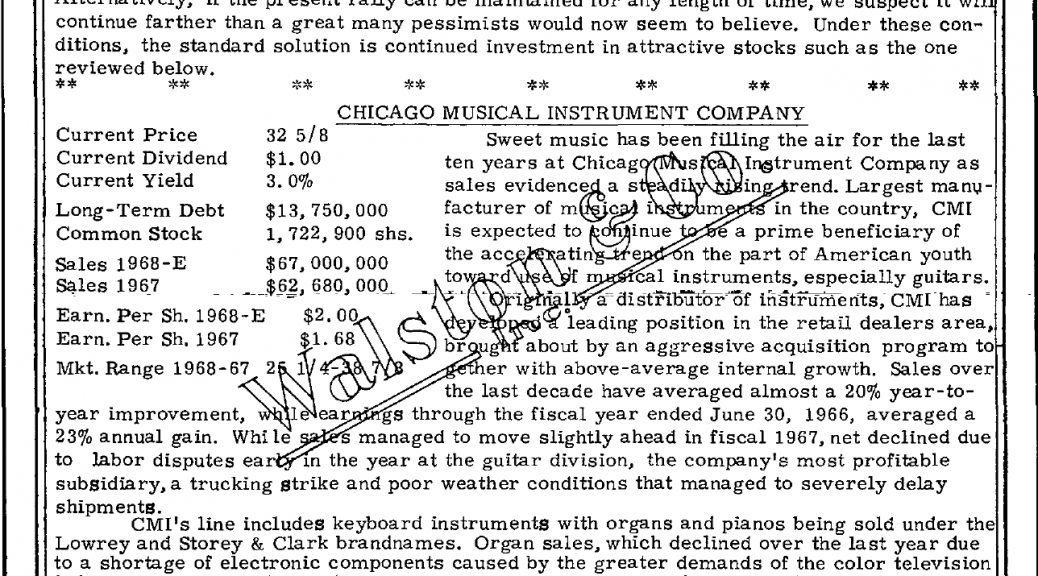 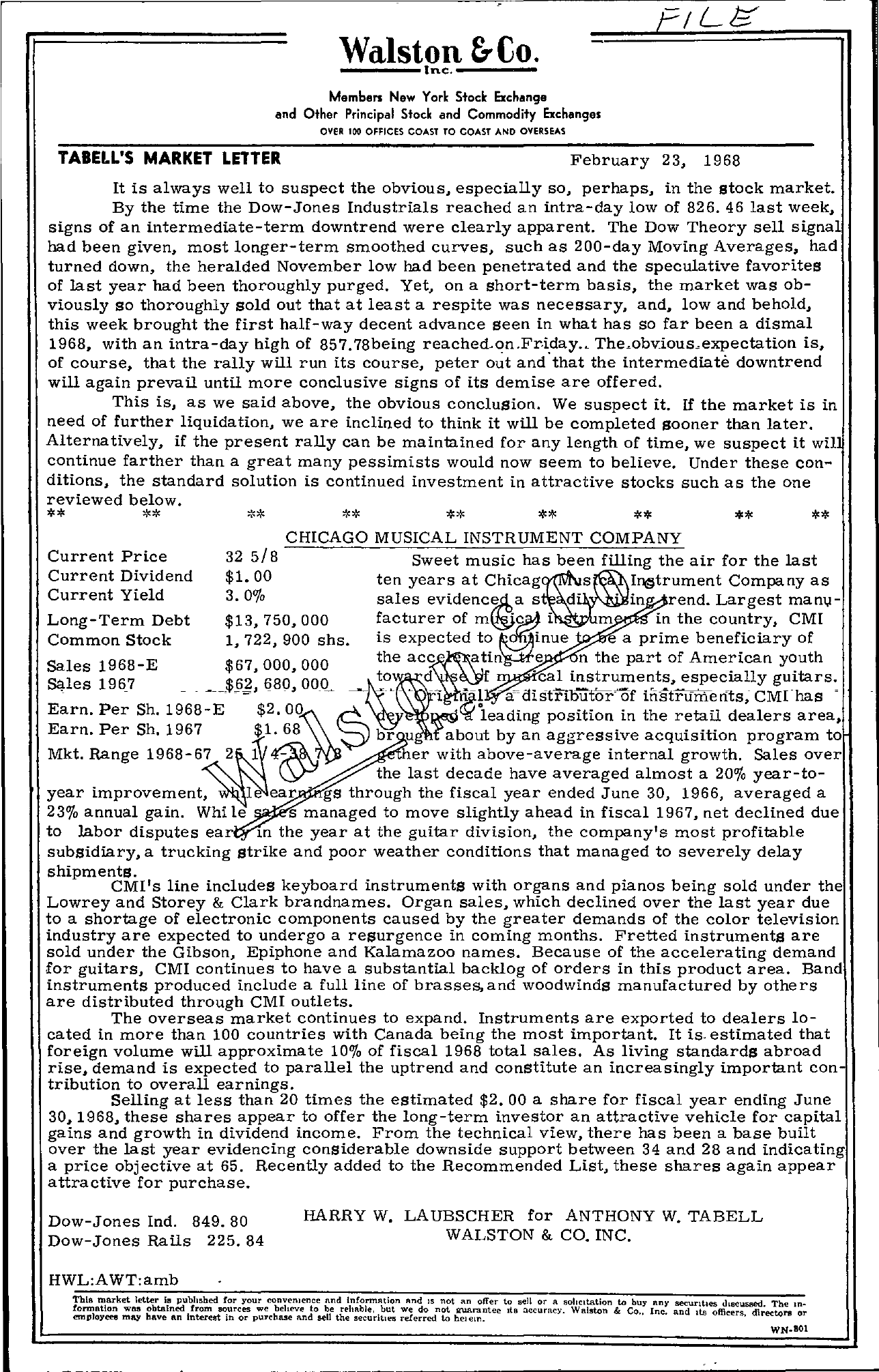 W—a-lslntocn.&–C-o-. Members New York Stock Exchange and Other Principal Stock and Commodity Exchange. OVER 100 OFF1CES COAST TO COAST AND OVERSEAS TABELL'S MARKET LETTER February 23, 1968 It is always well to suspect the obvious, especially so, perhaps, in the stock market. By the time the Dow-Jones Industrials reached an intra-day low of 826.46 last week, signs of an intermediate-term downtrend were clearly apparent. The Dow Theory sell signal had been given, most longer-term smoothed curves, such as 200-day Moving Averages, had turned down, the heralded November low had been penetrated and the speculative favorites of last year had been thoroughly purged. Yet, on a short-term basis, the market was obviously so thoroughly sold out that at least a respite was necessary, and, low and behold, this week brought the first half-way decent advance seen in what has so far been a dismal 1968, with an intra-day high of 857.78being reachedon.Fr.iday.. The.obviousexpectation is, of course, that the rally will run its course, peter o;t andthat the intermediate downtrend will again prevail until more conclusive signs of its demise are offered. This is, as we said above, the obvious concluSion. We suspect it. If the market is in need of further liquidation, we are inclined to think it will be completed Sooner than later. Alternatively, if the present rally can be maintained for any length of time, we suspect it wil continue farther than a great many pessimists would now seem to believe. Under these con- ditions, the standard solution is continued investment in attractive stocks such as the one reviewed below. CHICAGO MUSICAL INSTRUMENT COMPANY Current Price Current Dividend Current Yield 32 5/8 1. 00 3.00/0 Sweet music has been filling the air for the last ten years at Chicag!IllStrument Company as sales evidencma s d' . in rend. Largest manl,!- Long-Term Debt Common Stock 13,750,000 facturer of 1, 722, 900 shs. is expected to i m in the country, CMI a prime beneficiary of Sal 1968-E 67 000 000 the n the part of American youth &!l 1967 . . .611 680 OOQ. . — d 1 a is rl u or 0 ms reusmpeCentialSlC, YMguIihatsars Earn. Per Sh. 1968-E 2. Earn. Per Sh. 1967 1. 68 .V position in the retail dealers area, br u rf'about by an aggressive acquisition program to Mkt. Range 1 er with above-average internal growth. Sales over the last decade have averaged almost a 20 year-to- year improvement, e ear – gs through the fiscal year ended June 30, 1966, averaged a 23 annual gain. Whi Ie s managed to move slightly ahead in fiscal 1967, net declined due to labor disputes ea m the year at the guitar division, the company's most profitable subsidiary, a trucking strike and poor weather conditions that managed to severely delay shipments. CMI's line includes keyboard instruments with organs and pianos being sold under the Lowrey and Storey & Clark brandnames. Organ sales, which declined over the last year due to a shortage of electronic components caused by the greater demands of the color television industry are expected to undergo a resurgence in coming months. Fretted instruments are sold under the Gibson, Epiphone and Kalamazoo names. Because of the accelerating demand for guitars, CMI continues to have a substantial backlog of orders in this product area. Band instruments produced include a full line of brasses, and woodwinds manufactured by others are distributed through CMI outlets. The overseas market continues to expand. Instruments are exported to dealers lo- cated in more than 100 countries with Canada being the most important. It is. estimated that foreign volume will approxima te 10 of fiscal 1968 total sales. As living standards abroad rise, demand is expected to parallel the uptrend and constitute an increaSingly important con tribution to overall earnings. Selling at less than 20 times the estimated 2.00 a share for fiscal year ending June 30,1968, these shares appear to offer the long-term investor an attractive vehicle for capital gains and growth in dividend income. From the technical view, there has been a base built over the last year evidencing considerable downside support between 34 and 28 and indicating a price objective at 65. Recently added to the Recommended List, these shares again appear attractive for purchase. Dow-Jones Ind. 849.80 Dow-Jones Rails 225. 84 HARRY W. LAUBSCHER for ANTHONY W. TABELL WALSTON & CO. INC. HWLAWTamb This market letter Is pubhshed for your convenience and informRtion Rnd IS not an offer to sell or R sohcltation to buy any secUrities hscussed. Tbe In- formation was obtained from we beli'Ve to be rehable, but we do not guarantee Its occuracy. Walston & Co Inc. and Its officers directors or employees may bave an interest In or pUFcbase and sell the securities referred to helem.