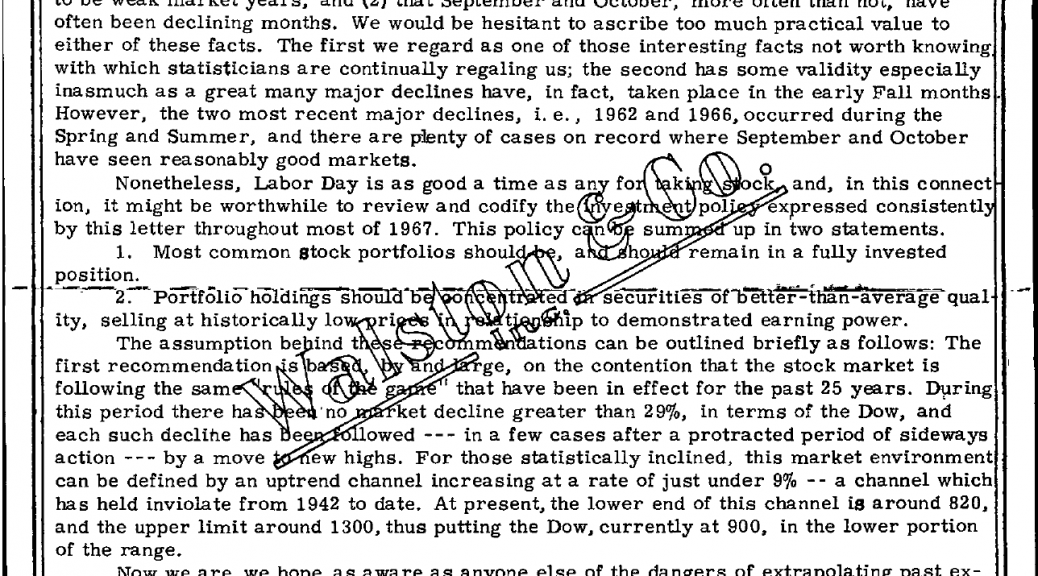 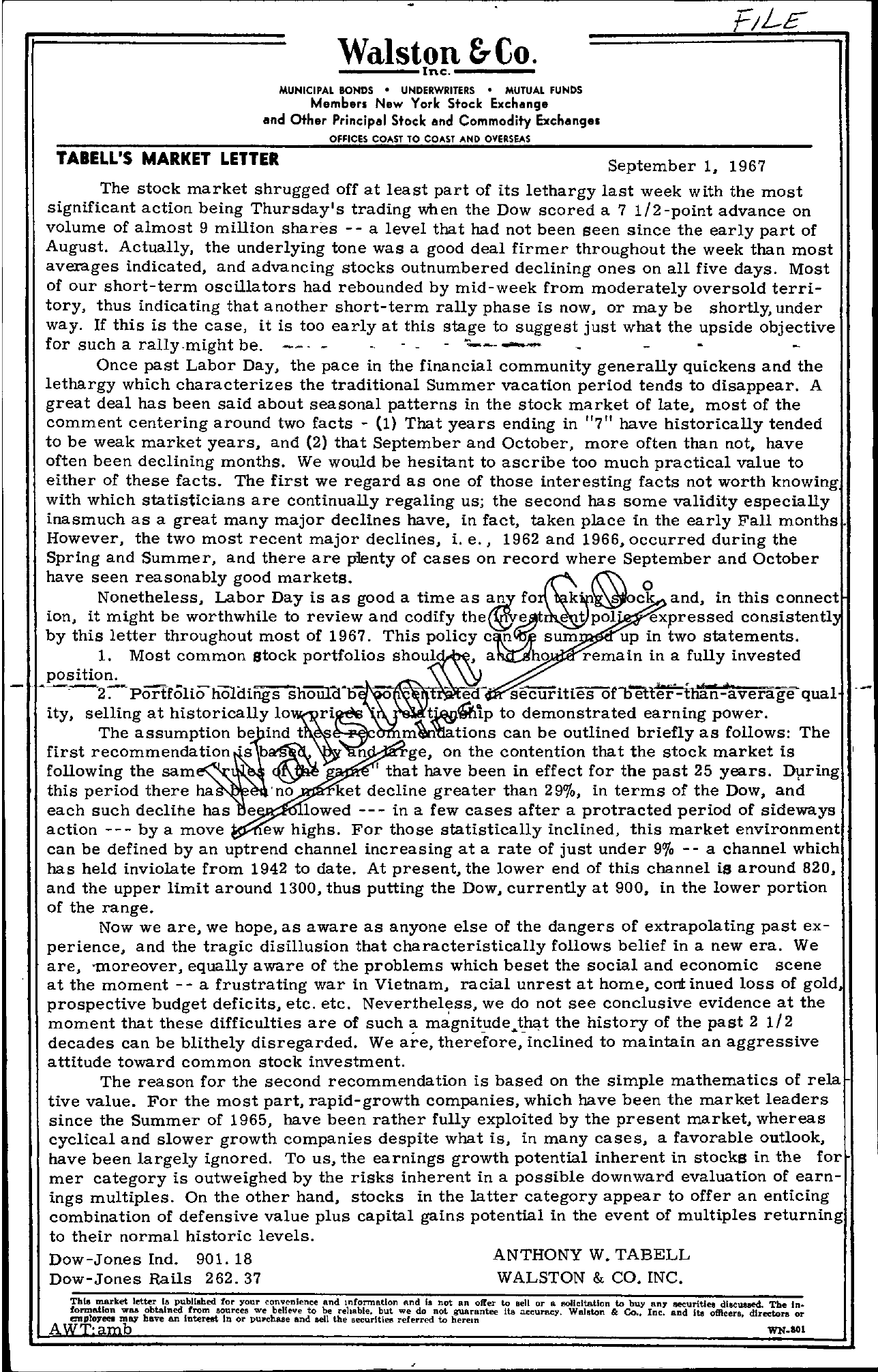 W- – -a-lIsntocn. -&– -C-o-. MUNICIPAL BONDS UNDERWRITERS MUTUAL FUNDS Membe.. New York Stock Exchange and Other Principal Stock and Commodity Exchanges TABELL'S MARKET LETTER OFFICES COAST TO COAST AND OVERSEAS September 1, 1967 The stock market shrugged off at least part of its lethargy last week with the most significant action being Thursday's trading when the Dow scored a 7 1/2-point advance on volume of almost 9 million shares — a level that had not been seen since the early part of August. Actually, the underlying tone was a good deal firmer throughout the week than most averages indicated, and advancing stocks outnumbered declining ones on all five days. Most of our short-term oscillators had rebounded by mid-week from moderately oversold terri- tory, thus indicating that another short-term rally phase is now, or may be shortly, under way. If this is the case, it is too early at this stage to suggest just what the upside objective for such a rally.might be. –. – — — Once past Labor Day, the pace in the financial community generally quickens and the lethargy which characterizes the traditional Summer vacation period tends to disappear. A great deal has been said about seasonal patterns in the stock market of late, most of the comment centering around two facts – (1) That years ending in 7 have historically tended to be weak market years, and (2) that September and October, more often than not, have often been declining months. We would be hesitant to ascribe too much practical value to either of these facts. The first we regard as one of those interesting facts not worth knowing with which statisticians are continually regaling us; the second has some validity especially inasmuch as a great many major declines have, in fact, taken place in the early Fall months. However, the two most recent major declines, i. e., 1962 and 1966, occurred during the Spring and Summer, and there are plenty of cases on record where September and October have seen reasonably good markets. Nonetheless, Labor Day is as good a time as ion, it might be worthwhile to review and codify by this letter throughout most of 1967. This policy 0 fo k and, in this connect pol- expressed consistentl sum up in two statements. 1. Most common stock portfolios position. . al\llho remain in a fully invested eir- secuFitieSoloerter–ttii11i-'average qual ity, selling at historically to demonstrated earning power. The assumption be ind t can be outlined briefly as follows The first recommendation -s n ge, on the contention that the stock market is following the sam , that have been in effect for the past 25 years. Djlring this period there ha 'no ket decline greater than 29/0, in terms of the Dow, and each such declihe has e lowed — – in a few cases after a protracted period of sideways action — by a move ew highs. For those statistically inclined, this market environment can be defined by an uptrend channel increasing at a rate of just under 9/0 – – a channel which has held inviolate from 1942 to date. At present, the lower end of this channel is around 820, and the upper limit around 1300, thus putting the Dow, currently at 900, in the lower portion of the range. Now we are, we hope, as aware as anyone else of the dangers of extrapolating past ex- perience, and the tragic disillusion that characteristically follows belief in a new era. We are, -moreover, equally aware of the problems which beset the social and economic scene at the moment – – a frustrating war in Vietnam, racial unrest at home, cont inued loss of gold prospective budget deficits, etc. etc. we do not see conclusive evidence at the moment that these difficulties are of such a the history of the past 2 1/2 decades can be blithely disregarded. We are, therefore, inclined to maintain an aggreSSive attitude toward common stock investment. The reason for the second recommendation is based on the simple mathematics of rela tive value. For the most part, rapid-growth companies, which have been the market leaders since the Summer of 1965, have been rather fully exploited by the present market, whereas cyclical and slower growth companies despite what is, in many cases, a favorable outlook, have been largely ignored. To us, the earnings growth potential inherent in stocks in the for mer category is outweighed by the risks inherent in a possible downward evaluation of earn- ings multiples. On the other hand, stocks in the latter category appear to offer an enticing combination of defensive value plus capital gains potential in the event of multiples returning to their normal historic levels. Dow-Jones Ind. 901. 18 ANTHONY W. TABELL Dow-Jones Rails 262 37 WALSTON & CO. INC. . bThis market letter ia published for your convenience and lnforIDntlon Rnd Is not an oller formation emptoyeea waa mB.1 obtained from sources we believe to be rehable, but have an interest In or pUJlchase and sell the securities rweeferdroedntoot guarantee herein to sell or II. solicitation to buy Ita ueuracy, WaJlton ,& Co., any Inc. securities dlscUflsed. The and Ita officers, directors or WN.80.