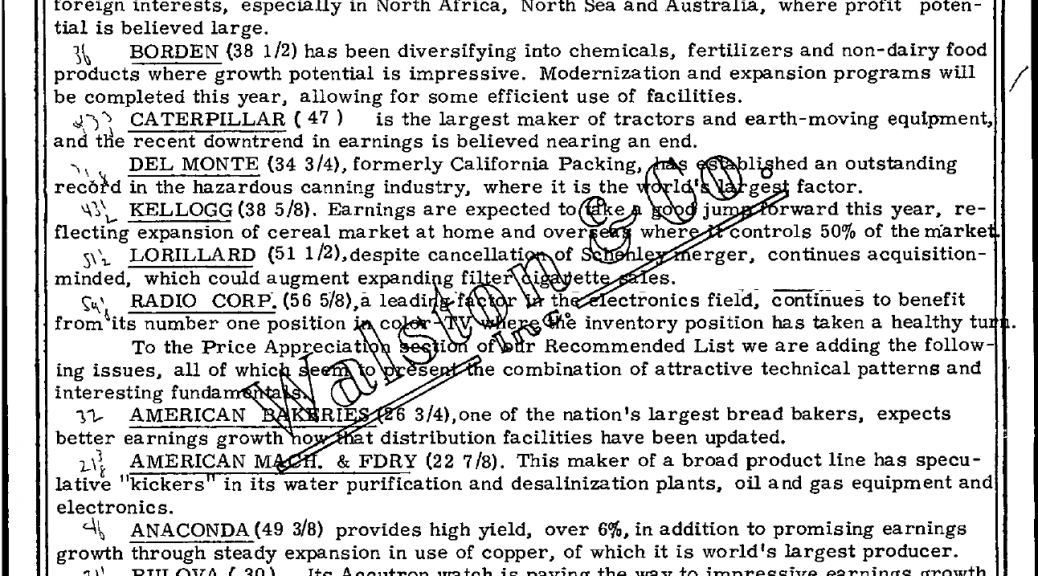 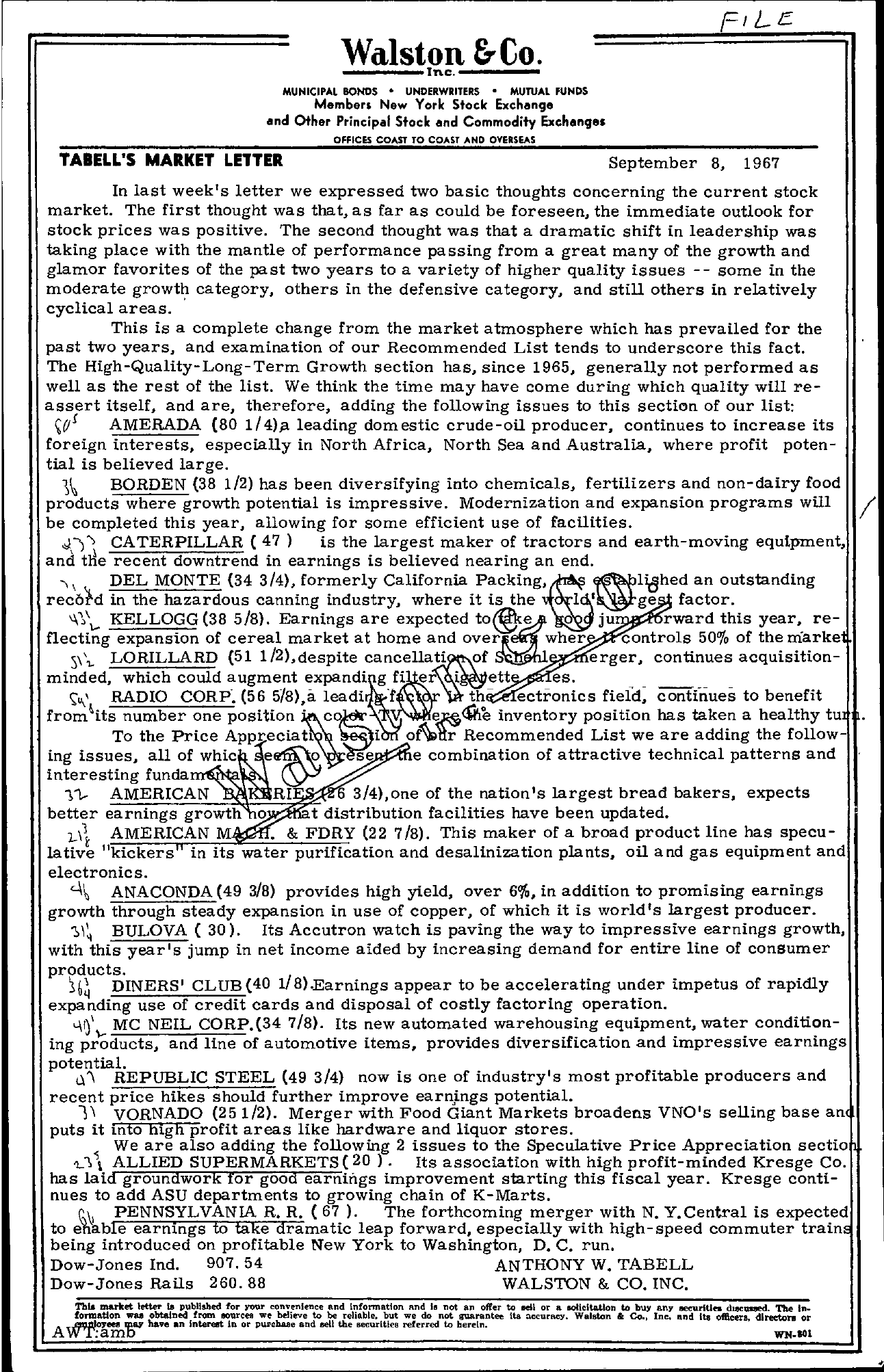 W—a-l-sItnonc.&–C-o-. MUNICIPAL BONOS UNDERWRITERS MUTUAL FUNDS Mambe.. New York Stock Exchanca8 and Other Principa' Stock and Commodity Exchencae. TABELL'S MARKET LETTER OFFICES COA,ST TO COAST AND OVERSEAS September 8, 1967 In last week's letter we expressed two basic thoughts concerning the current stock market. The first thought was that, as far as could be foreseen, the immediate outlook for stock prices was positive. The second thought was that a dramatic shift in leadership was taking place with the mantle of performance passing from a great many of the growth and glamor favorites of the past two years to a variety of higher quality issues – – some in the moderate growth category, others in the defensive category, and still others in relatively cyclical areas. . This is a complete change from the market atmosphere which has prevailed for the past two years, and examination of our Recommended List tends to underscore this fact. The High-Quality-Long-Term Growth section has, since 1965, generally not performed as well as the rest of the list. We think the time may have come during which quality will re- assert itself, and are, therefore, adding the following issues to this section of our list AMERADA (80 1/4)11 leading domestic crude-oil producer, continues to increase its foreign interests, especially in North Africa, North Sea and Australia, where profit poten- tial is believed large. BORDEN (38 1/2) has been diversifying into chemicals, fertilizers and non-dairy food Iproducts where growth potential is impressive. Modernization and expansion programs will be completed this year, allowing for some efficient use of facilities. J') ' CATERPILLAR ( 47) is the largest maker of tractors and earth-moving equipment, and tHe recent downtrend in earnings is believed nearing an end. '\ \ DEL MONTE (34 3/4) , formerly California an outstanding recb'td in the hazardous canning industry, where it is the 1 factor. KELLOGG (38 5/8). Earnings are expected flecting expansion of cereal market at home and over ju rward this year, rewher controls 50 of the marke S\\. LORILLARD (51 1/2),despite of erger, continues acquisition- minded, which could augment e i ett es. \,,' RADIO CORP. (56 5/8),a leadi'r th- ectronics field; continues to benefit from number one To the Price Appreciatr inventory position has taken a healthy tu i of\;;'!ir Recommended List we are adding the follow- ing issues, all of whic interesting funda '1(1… AMERICAN 0)1 RI se e combination of attractive technical patterns and 3/4),one of the nation's largest bread bakers, expects b eJt.t..e\\ r earnings growth AMERICAN M 0 . t distribution facilities have been updated. & FDRY (22 7/8). This maker of a broad product line has specu- lative kickers in its water purification and desalinization plants, oil and gas equipment and electronics. ANACONDA (49 3/8) provides high yield, over 6, in addition to promising earnings growth through steady expansion in use of copper, of which it is world's largest producer. BULOVA ( 30). Its Accutron watch is paving the way to impressive earnings growth, with this year's jump in net income aided by increasing demand for entire line of consumer products. DINERS' CLUB(40 1I8).Earnings appear to be accelerating under impetus of rapidly expanding use of credit cards and disposal of costly factoring operation. '-\1)' MC NEIL CORP.(34 7/8). Its new automated warehousing equipment, water condition- ing pfoducts, and line of automotive items, provides diversification and impressive earnings poteun\tiaRl.EPUBLIC STEEL (49 3/4) now is one of industry's most profitable producers and recent price hikes should further improve earnJngs potential. \\ VORNADO (251/2). Merger with Food Giant Markets broadens VNO's selling base an puts it mto hlgh profit areas like hardware and liquor stores. 'L\ We are also adding the following 2 issues to the Speculative Price Appreciation sectio ALLIED SUPERMARKETS (20 ) . Its association with high profit-minded Kresge Co. has laid groundwork for good earnings improvement starting this fiscal year. Kresge continues to add ASU departments to growing chain of K-Marts. PENNSYLVANIA R. R. (67). The forthcoming merger with N. Y.Central is expected to enable earmngs to take dramatic leap forward, especially with high-speed commuter train being introduced on profitable New York to Washington, D. C. run. Dow-Jones Ind. 907.54 Dow-Jones Rails 260.88 ANTHONY W. TABELL WALSTON & CO. INC. TblA market letter 1a published for your conve-nlence and Infonnatlon Rnd III not an ofter to sell or a solicitation to buy any aeeurltln dl8llusaed. The In- A formation W88 obtained from 80urees we believe to be reliable. but we do not guarantee Ita o.ccuraey. Walston Co., Inc. and Its ofIlcera. dlreeton or have an Interest In or pUl'chaee and IJeII the securities referred to herein. WN101