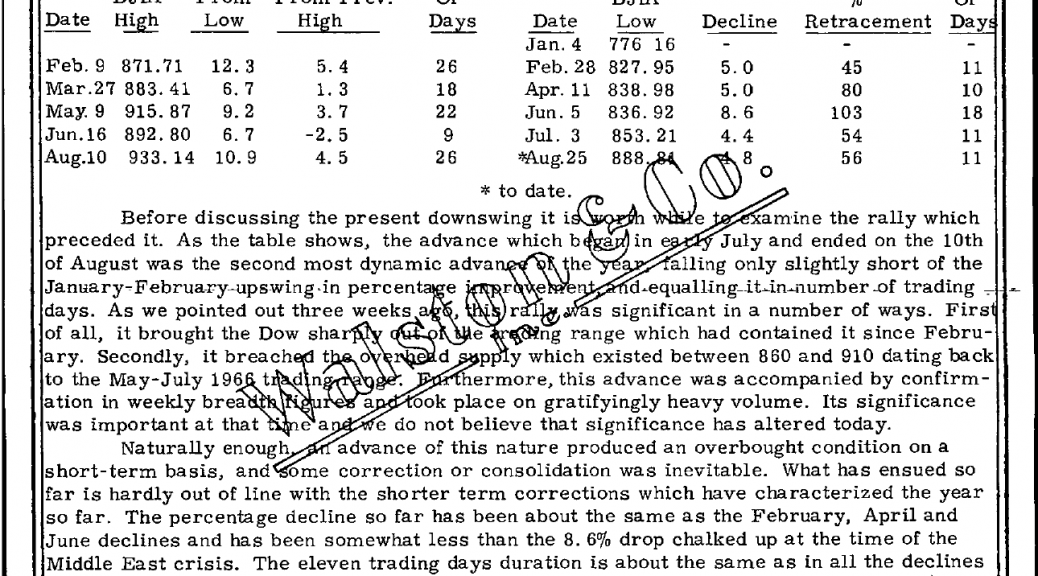 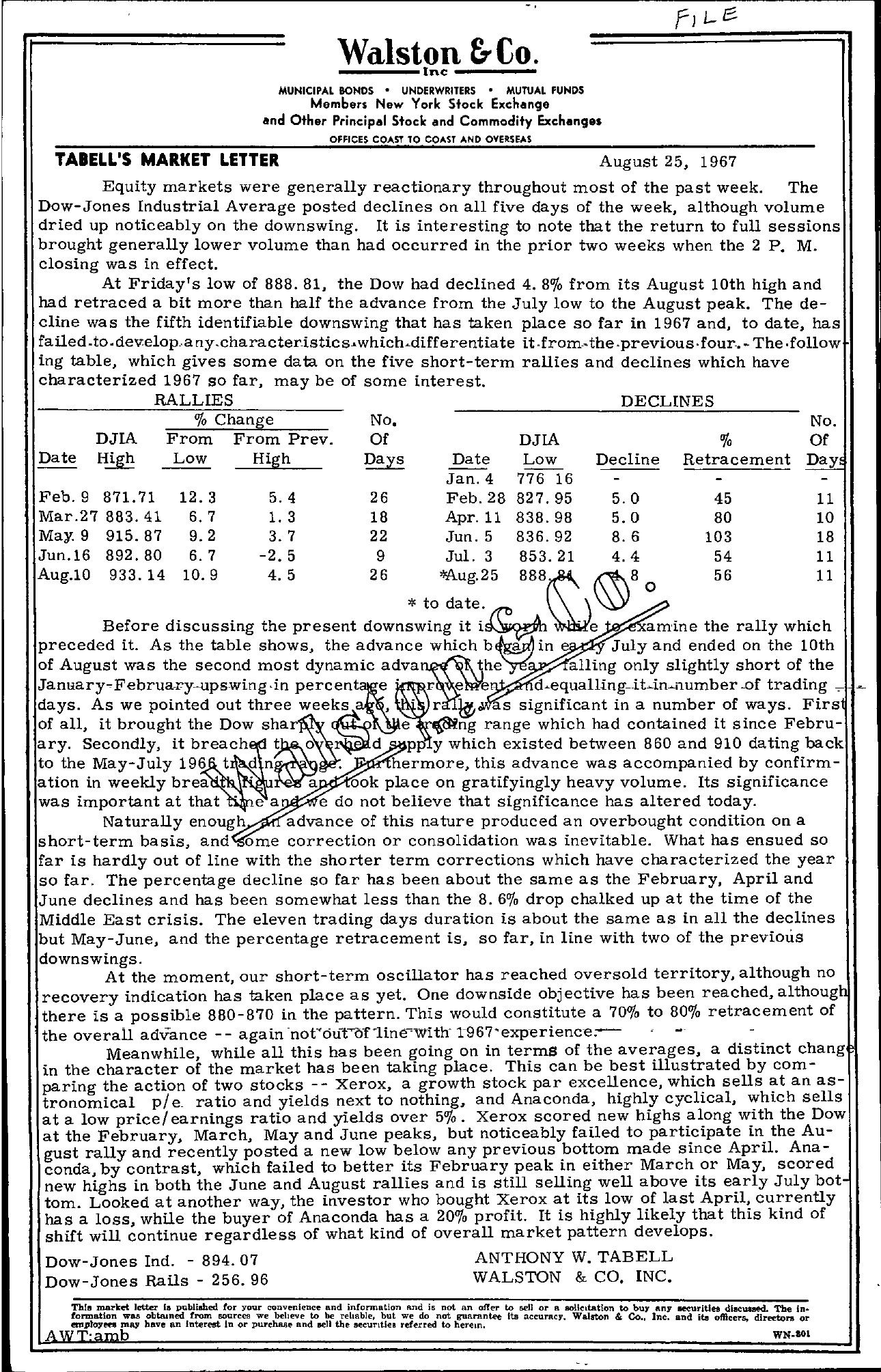 Walston &Co. MUNICIPAL BONDS UNDERWRITERS MUTUAL fUNDS Members New York Stock Exchange and Other Principal Stock and Commodity Exchange. TABEll'S MARKET lETTER OFFICES COAST TO COAST AND OVERSEAS August 25, 1967 Equity markets were generally reactionary throughout most of the past week. The Dow-Jones Industrial Average posted declines on all five days of the week, although volume dried up noticeably on the downswing. It is interesting to note that the return to full sessions brought generally lower volume than had occurred in the prior two weeks when the 2 p, M. closing was in effect. At Friday's low of 888.81, the Dow had declined 4.8 from its August 10th high and had retraced a bit more than half the advance from the July low to the August peak. The de- cline was the fifth identifiable downswing that has taken place so far in 1967 and, to date, has failed,to,develop.a ny-characteristics.which.differentiate it.from,the.previousfour. – Thefollow ing table, which gives some data on the five short-term rallies and declines which have characterized 1967 so far, may be of some interest. RALLIES DECLINES DJlA Date High Change From From Prevo Low High No. Of Days DJlA Date Low Decline No. Of Retracement Day Jan. 4 776 16 Feb. 9 871.71 Mar.27 883.41 May. 9 915.87 Jun.16 892. 80 12. 3 6. 7 9.2 6. 7 5. 4 1.3 3.7 -2. 5 26 Feb. 28 827.95 5.0 18 Apr. 11 838. 98 5.0 22 Jun. 5 836. 92 8.6 9 Jul. 3 853.21 4.4 45 80 103 54 11 10 18 11 Aug.10 933. 14 10. 9 4.5 26 Aug. 25 to date. W 80 56 11 Before discussing the present downswing it . e amine the rally which preceded it. As the table shows, the advance which in e July and ended on the 10th of August was the second most dynamic alling only slightly short of the January,Februa.ly-upswing.in r e e trading Wdays. As we pointed out three weeks r as significant in a number of ways. Firs of all, it brought the Dow e range which had contained it since Febru- ary. Secondly, it breach pp Y which existed between 860 and 910 dating back to the May-July 196 t d n . hermore, this advance was accompanied by confirm- ation in weekly brea . a ook place on gratifyingly heavy volume. Its significance was important at that e do not believe that significance has altered today. Naturally enough advance of this nature produced an overbought condition on a short-term basis, and orne correction or consolidation was inevitable. What has ensued so far is hardly out of line with the shorter term corrections which have characterized the year so far. The percentage decline so far has been about the same as the February, April and June declines and has been somewhat less than the 8.6 drop chalked up at the time of the Middle East crisis. The eleven trading days duration is about the same as in all the declines but May-June, and the percentage retracement is, so far, in line with two of the previOUS downswings. At the moment, our short-term oscillator has reached oversold territory, although no recovery indication has taken place as yet. One downside objective has been reached, althoug there is a possible 880-870 in the pattern. This would constitute a 70 to 80 retracement of the overall advance – – again not'6litcif-line' with- 1-967'experience– Meanwhile, while all this has been going on in termS of the averages, a distinct chang in the character of the market has been taking place. This can be best illustrated by com- paring the action of two stocks — Xerox, a growth stock par excell,ence, whi;h sells t an as- tronomical p/ e ratio and yields next to nothing, and Anaconda, hLghly cyclLcal, WhLCh sells at a low price/ earnings ratio and yields over 5. Xerox scored new highs along with the Dow at the February, March, May and June peaks, but failed to parti,cipate in, the Au- gust rally and recently posted a new low below any prevLOus bottom made smce April. Ana- conda, by contrast, which failed to better its February peak in either March or May, scored new highs in both the June and August rallies and is still well above its erly July bot tom. Looked at another way, the investor who bought Xerox at LtS low of last Aprtl, currently has a loss, while the buyer of Anaconda has a 20 profit. It is highly likely that this kind of shift will continue regardless of what kind of overall market pattern develops. Dow-Jones Ind. – 894.07 Dow-Jones Rails – 256.96 ANTHONY W. TABELL WALSTON & CO. INC. bThis market letter ia published for your convenience and information Rnd is not an offer to sell or a soliCItation to buy any formation emgloyeetl was mIL)' obtamed from sources we believe to be reliable, but have an interest in or pUl'chaae and &ell the seCuTltlea we refe rdroedntoot guarantee herem. its accuracy. Walston & Co., Inc. asnedeuritiatleosfBdeiaecrus,aadeidr.eeTtohrea or WN,IO'