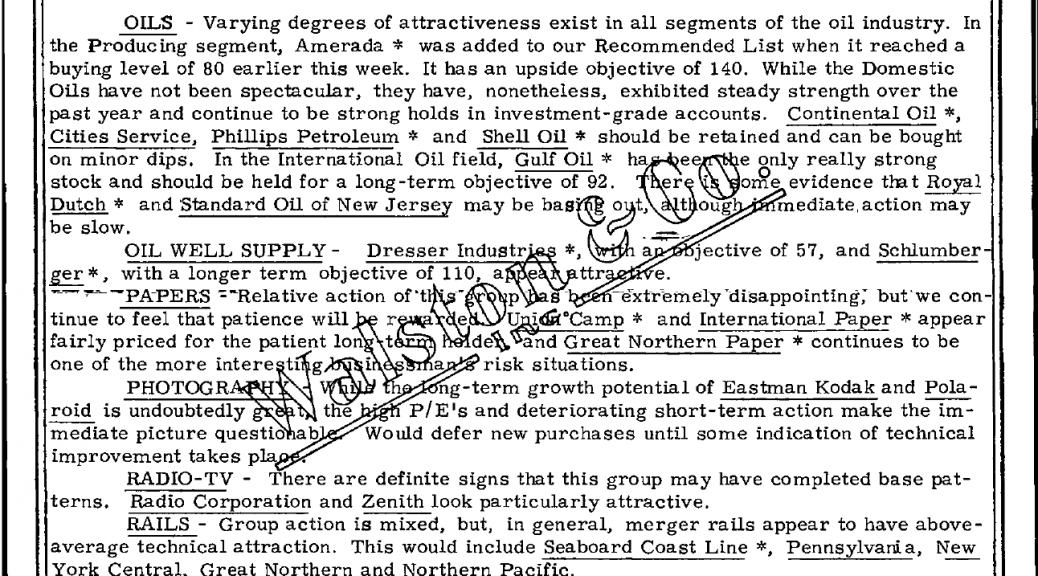 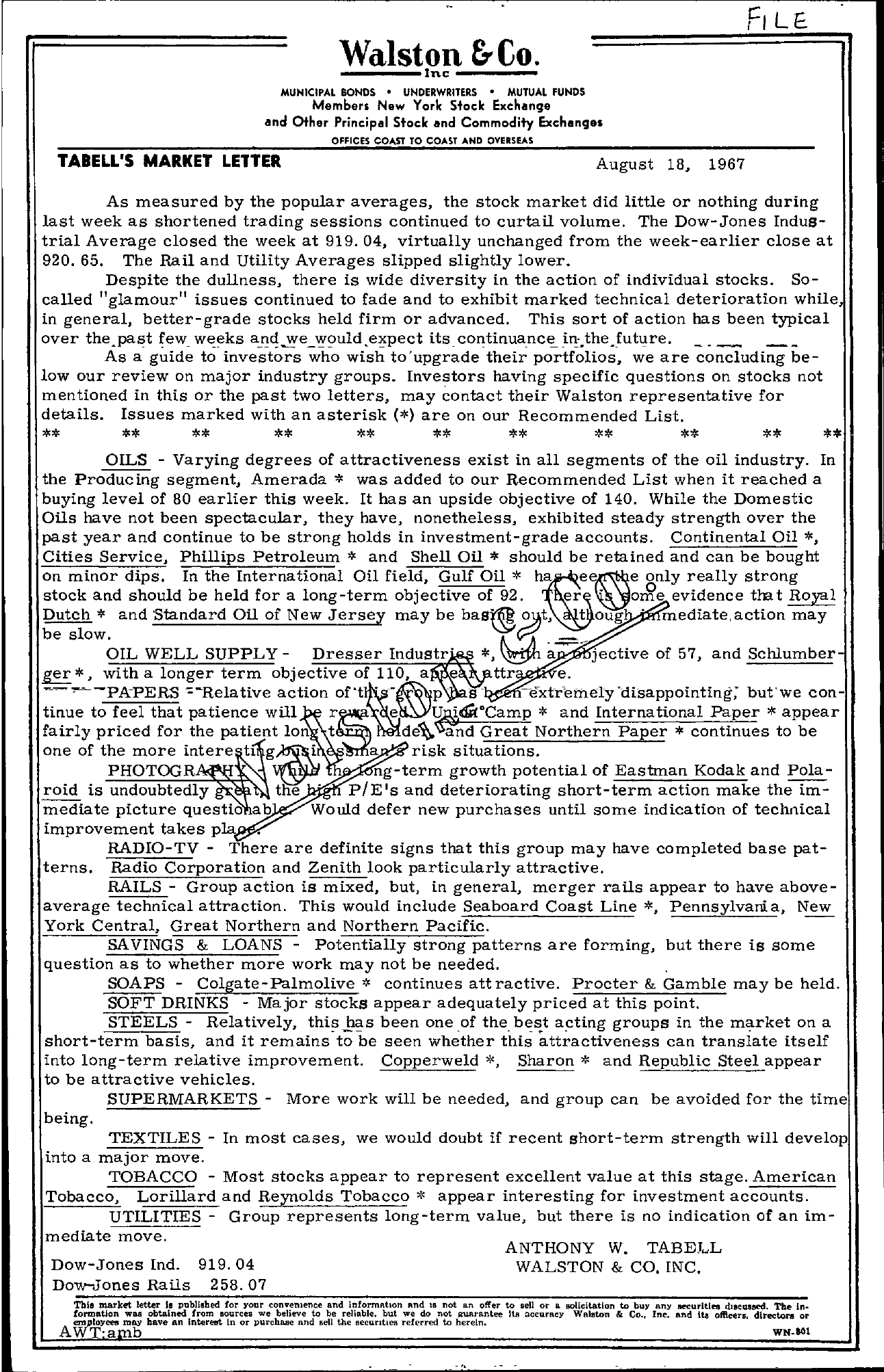 Walston &Co. —–Inc ;-.— MUNICIPAL BONllS UNDERWRITERS MUTUAL FUNDS Members New York Stock Exchange and Other Principal Stock and Commodity Exchanges TABELL'S MARKET LETTER OFFICES COAST TO COAST AND OVERSEAS August 18, 1.–1 L 1967 As measured by the popular averages, the stock market did little or nothing during last week as shortened trading sessions continued to curtail volume. The Dow-Jones Indus- trial Average closed the week at 919.04, virtually unchanged from the week-earlier close at 920.65. The Rail and utility Averages slipped slightly lower. Despite the dullness, there is wide diversity in the action of individual stocks. So- called glamour issues continued to fade and to exhibit marked technical deterioration while in general, better-grade stocks held firm or advanced. This sort of action has been typical over the,past few weeks and\Ve\Vould,epect its in.the.future. . As a guide to investors who wish to'upgrade their portfolios, we are concluding be- low our review on major industry groups. Investors having specific questions on stocks not mentioned in this or the past two letters, may contact their Walston representative for details. Issues marked with an asterisk () are on our Recommended List. OILS – Varying degrees of attractiveness exist in all segments of the oil industry. In the Producing segment, Amerada was added to our Recommended List when it reached a buying level of 80 earlier this week. It has an upside objective of 140. While the Domestic Oils have not been spectacular, they have, nonetheless, exhibited steady strength over the past year and continue to be strong holds in investment-grade accounts. Continental Oil , Cities Service, Phillips Petroleum and Shell Oil should be retained and can be bought on minor dips. In the International Oil field, Gulf Oil only really strong stock and should be held for a long-term objective of 92. Dutch and Standard Oil of New Jersey may be bast3!. be slow. II. Gj' OIL WELL SUPPLY – Dresser Industr' , ger , with a longer term objective of 110, a e ttr er evidence tin t Royal t oug . mediate. action may – jective of 57, and Schlumber e. action tinue to feel that patience fairly priced for the patient Ion t one of the more intere h waPHOTOGR s- but'we conand International Paper appear de,\ Great Northern Paper continues to be a risk situations. ng-term growth potential of Eastman Kodak and Pola- roid is undoubtedly tlie . PiE's and deteriorating short-term action make the im- mediate picture questio Would defer new purchases until some indication of technical improvement takes pla RADIO-TV – There are definite signs that this group may have completed base pat- terns. Radio Corporation and Zenith look particularly attractive. RAILS – Group action is mixed, but, in general, merger rails appear to have above- average technical attraction. This would include Seaboard Coast Line , Pennsylvania, New York Central, Great Northern and Northern Pacific. — SAVINGS & LOANS – Potentially strong patterns are forming, but there is some question as to whether more work may not be needed. SOAPS – Colgate-Palmolive continues att ractive. Procter & Gamble may be held. SOFT DRINKS – Major stocks appear adequately priced at this point. STEELS – Relatively, this has been one of the best acting groups in the market on a short-term basis, and it remains'tobe seen whether this can transiate itself into long-term relative improvement. Copperweld , Sharon and Republic Steel appear to be attractive vehicles. SUPERMARKETS – More work will be needed, and group can be avoided for the time being. TEXTILES – In most cases, we would doubt if recent short-term strength will develop into a major move. TOBACCO – Most stocks appear to represent excellent value at this stage. American Tobacco, Lorillard and Reynolds Tobacco appear interesting for investment accounts. UTILITIES – Group represents long-term value, but there is no indication of an im- mediate move. Dow-Jones Ind. 919.04 ANTHONY W. TAB ELL WALSTON & CO. INC. Dow-Jones Rails 258.07 Thll! market letter III published for your formation WE18 obtained from 80urces we believe to and information Rnd 18 not an offer be reliable. but we do not guarantee to sell or a BOilcilation to buy its 3ccuraey Walston & Co., Rny Ine. asnecduriuitieosffdiclearesu.ssdeidr.ecTtohres inor AWT'a b!!!I'p'loyees may have an Intereat In or purchase and sell the securities referred to herein. W H. . . I