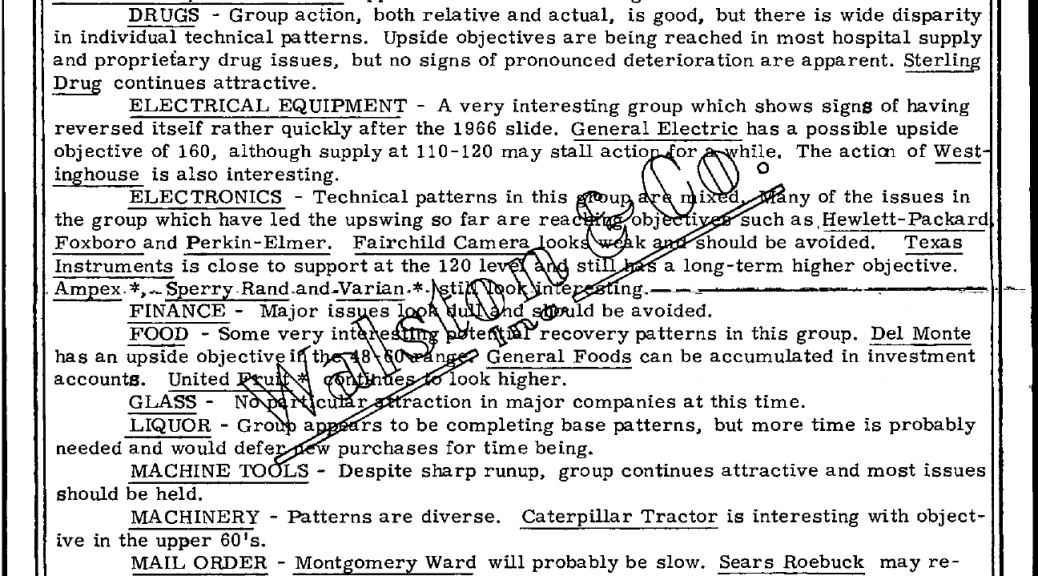 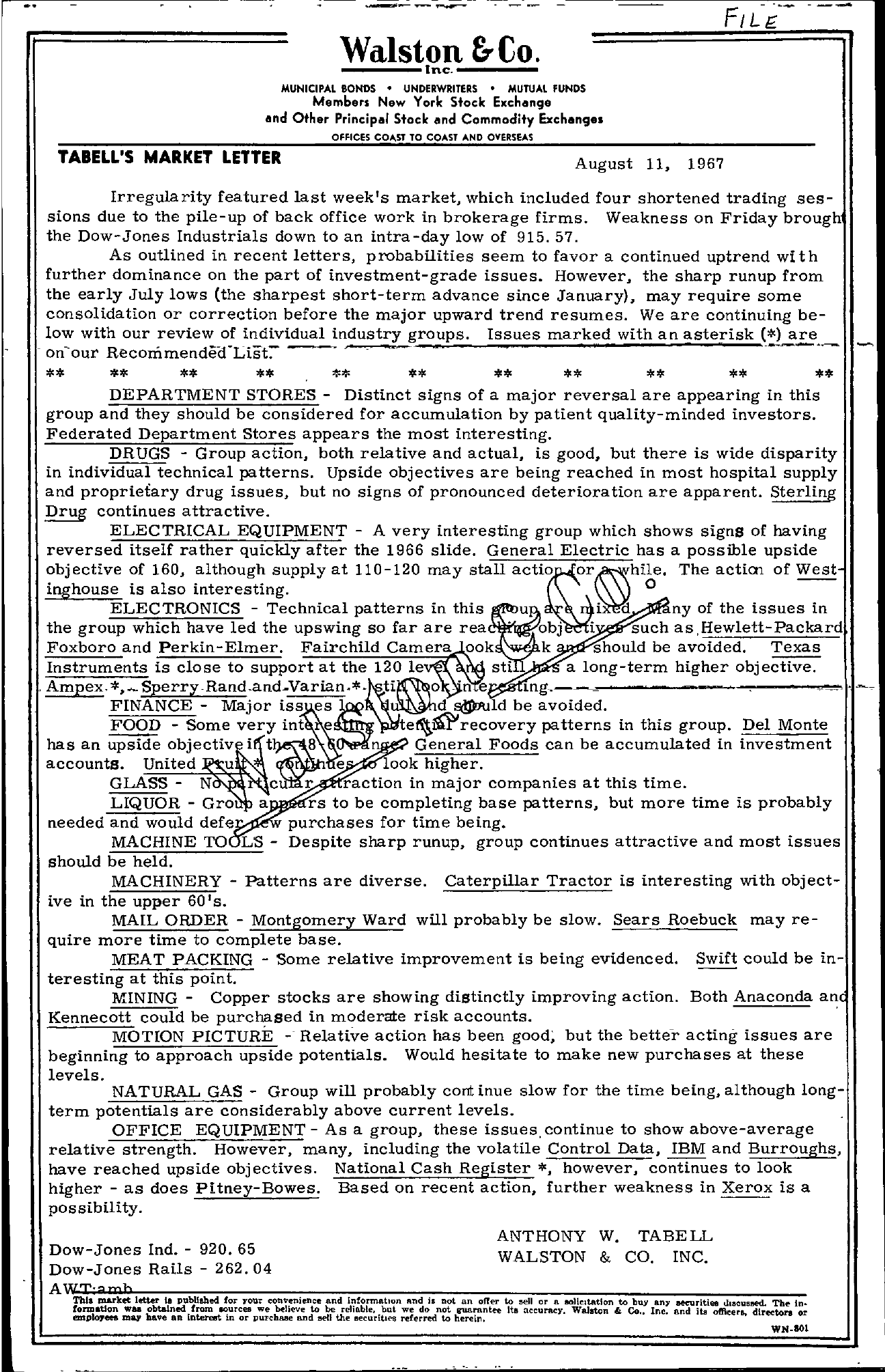 r——cc——–c-c— .-….-..-.— W—a-lIsntocn.-&-C–o-. MUNICIPAL BONDS UNDERWRITERS MUTUAL FUNDS Membe.. New York Stock Exchange and Other Principal Stock and Commodity Exchange. TABEll'S MARKET lETTER OFFICES COA,ST TO COAST AND OVERSEAS August 11, 1967 Irregularity featured last week's market, which included four shortened trading ses- sions due to the pile-up of back office work in brokerage firms. Weakness on Friday brough the Dow-Jones Industrials down to an intra-day low of 915.57. As outlined in recent letters, probabilities seem to favor a continued uptrend wit h further dominance on the part of investment-grade issues. However, the sharp runup from the early July lows (the sharpest short-term advance since January), may require some consolidation or correction before the major upward trend resumes. We are continuing be- low with our review of individual industry groups. Issues marked with an asterisk () are on'our DEPARTMENT STORES – Distinct signs of a major reversal are appearing in this group and they should be considered for accumulation by patient quality-minded investors. Federated Department Stores appears the most interesting. DRUGS – Group action, both relative and actual, is good, but there is wide disparity in individual technical patterns. Upside objectives are being reached in most hospital supply and proprietary drug issues, but no signs of pronounced deterioration are apparent. Sterling Drug continues attractive. ELECTRICAL EQUIPMENT – A very interesting group which shows signs of having reversed itself rather quickly after the 1966 slide. General Electric has a possible upside objective of 160, although supply at 110-120 may stall The action of West inghouse is also interesting. ELECTRONICS – Technical patterns in this 0 ia ny of the issues in the group which have led the upswing so far are rea . obj i such as ,Hewlett-Packard Foxboro and Perkin-Elmer. Fairchild Camera ook k should be avoided. Texas Instruments is close to support at the 120 Ie sti a long-term higher objective. . . -. FOOD – Some very int e patterns in this group. Del Monte has an upside objectiv i tiE n General Foods can be accumulated in investment accounts. United u e look higher. GLASS – N c r raction in major companies at this time. LIQUOR – Gro rs to be completing base patterns, but more time is probably needed and would defe purchases for time being. MACHINE TO LS – Despite sharp runup, group continues attractive and most issues should be held. MACHINERY – Patterns are diverse. Caterpillar Tractor is interesting with object- ive in the upper 60's. MAIL ORDER – Montgomery Ward will probably be slow. Sears Roebuck may re- quire more time to complete base. MEAT PACKING – Some relative improvement is being evidenced. Swift could be in- teresting at this point. MINING – Copper stocks are showing distinctly improving action. Both Anaconda an Kennecott could be purchased in moderate risk accounts. MOTION PICTURE – Relative action has been good; but the better acting issues are beginning to approach upside potentials. Would hesitate to make new purchases at these levels. NATURAL GAS – Group will probably cont inue slow for the time being, although long- term potentials are considerably above current levels. OFFICE EQUIPMENT – As a group, these issues. continue to show above-average relative strength. However, many, including the volatile Control Data, IBM and Burroughs, have reached upside objectives. National Cash Register , however, continues to look higher – as does Pitney-Bowes. Based on recent action, further weakness in Xerox is a possibility. Dow-Jones Ind. – 920. 65 Dow-Jones Rails – 262.04 ANTHONY W. TABELL WALSTON & CO. INC. AWT'a mb This market letter III pubU8hed for your convenience and InformatIOn ftnd is not an offer to sell or a soliCitation to buy an)' aeeurltiee dlseussed. The inefomrmplaotyJeoens mwaays hoabvtaeinaend IfnrtoemrestlOinuroeers pwurechase andtosebllethreelisaebclue.r.ibtiuest rweeferdroedntoot hgeUraeirna.ntee Its aceumcy, Walston & Co.. Inc. and its ofIicera, direeton or WN101