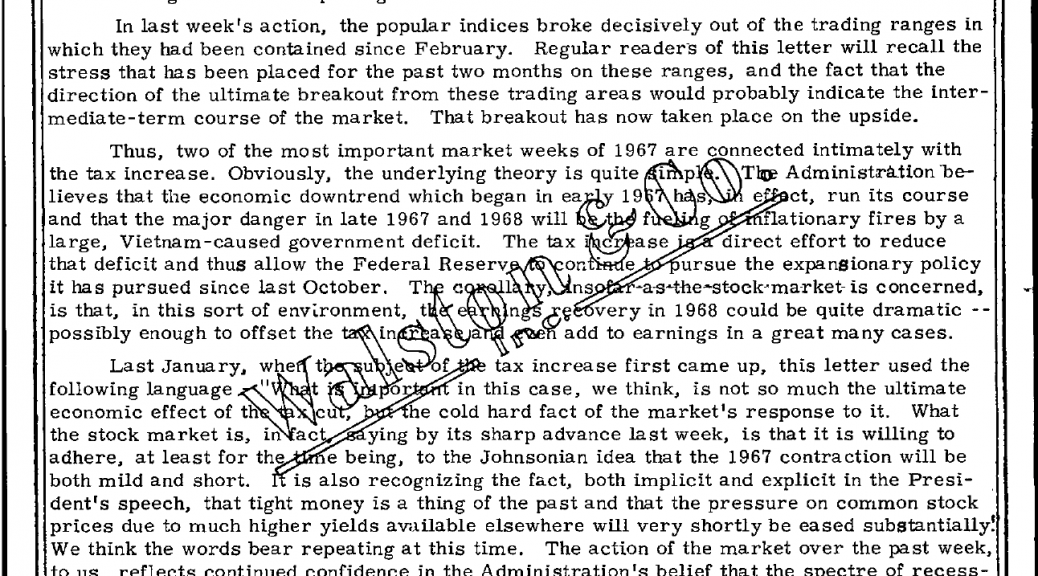 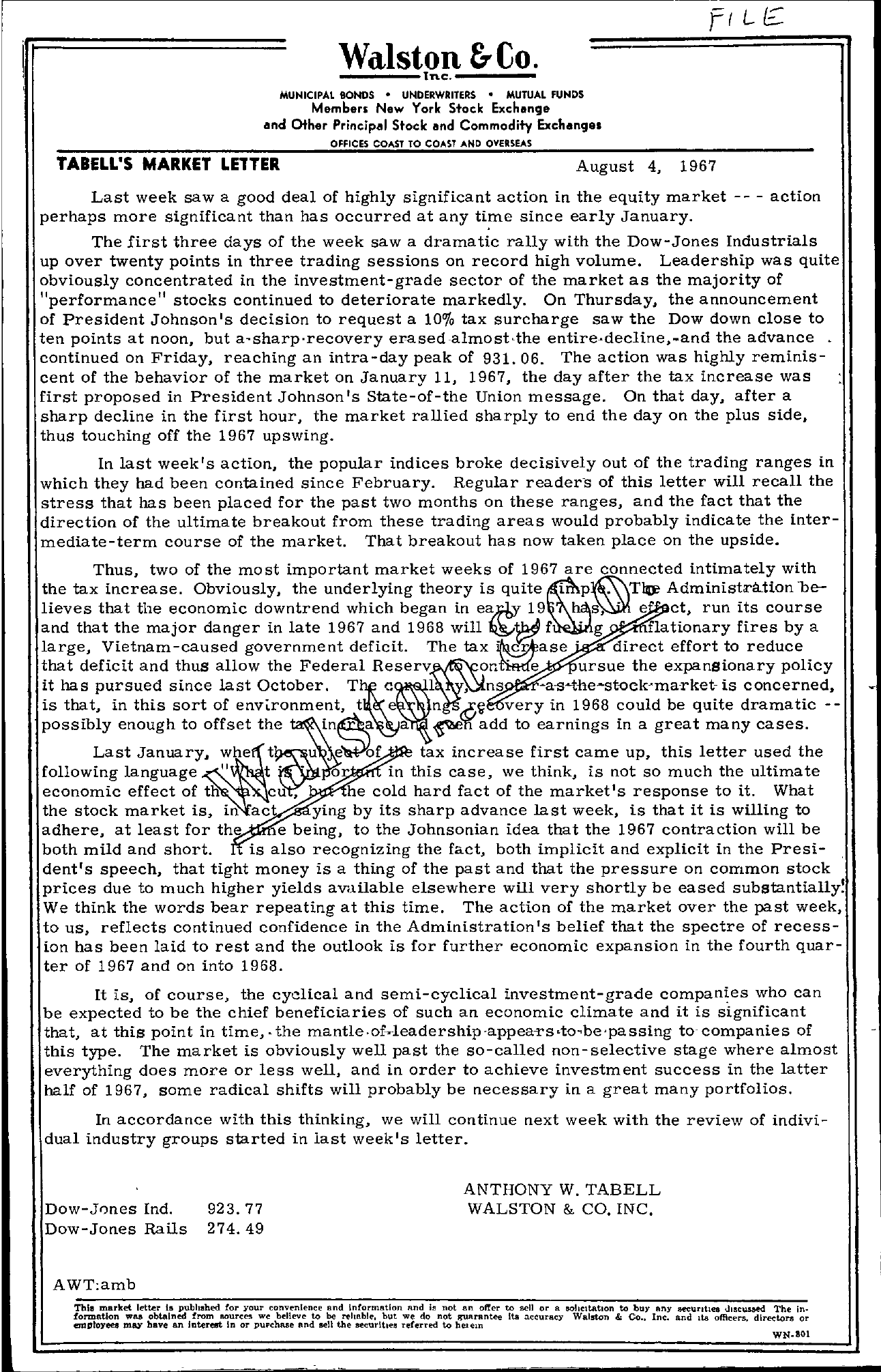 W—a-l-sltnocn.-&-C–o-. MUNICIPAL BONOS UNDERWRITERS MUTUAL FUNDS Members New York Stock Exchenge end Other Principe I Stock end Commodity Exchenges OFFICES COAST TO COAST AND OVERSEAS TABELL'S MARKET LETTER August 4, rlLt 1967 Last week saw a good deal of highly significant action in the equity market — – action perhaps more significant than has occurred at any time since early January. The first three days of the week saw a dramatic rally with the Dow-Jones Industrials up over twenty points in three trading sessions on record high volume. Leadership was quite obviously concentrated in the investment-grade sector of the market as the majority of performance stocks continued to deteriorate markedly. On Thursday, the announcement of President Johnson's decision to request a 10 tax surcharge saw the Dow down close to ten points at noon, but asharprecovery er-asedalmostcthe entire,decline,-and the advance . continued on Friday, reaching an intra-day peak of 931. 06. The action was highly reminiscent of the behavior of the market on January 11, 1967, the day after the tax increase was first proposed in President Johnson's State-of-the Union message. On that day, after a sharp decline in the first hour, the market rallied sharply to end the day on the plus side, thus touching off the 1967 upswing. In last week's action, the popular indices broke decisively out of the trading ranges in which they had been contained since February. Regular readers of this letter will recall the stress that has been placed for the past two months on these ranges, and the fact that the direction of the ultimate breakout from these trading areas would probably indicate the inter- mediate-term course of the market. That breakout has now taken place on the upside. Thus, two of the most important market weeks of 1967 are connected intimately with S 'the tax increase. Obviously, the underlying theory is quite Administra..tion be- lieves that the economic downtrend which began in 19 e ct, run its course and that the major danger in late 1967 and 1968 will f .g flationary fires by a large, Vietnam -caused government deficit. The tax . direct effort to reduce that deficit and thus allow the Federal ursue the expansionary policy it has pursued since last October. ,ns is concerned, is that, in this sort of envLronment, t e n ,,1;1 very in 1968 could be quite drama tic — possibly enough to offset the a add to earnings in a great many cases. Last January, whe e'Wbf tax increase first came up, this letter used the following language t 0 in this case, we think, is not so much the ultimate economic effect of ttl cu , he cold hard fact of the market's response to it. What the stock market is, in ac ying by its sharp advance last week, is that it is willing to adhere, at least for the e being, to the Johnsonian idea that the 1967 contraction will be both mild and short. is also recognizing the fact, both implicit and explicit in the Presi- dent's speech, that tight money is a thing of the past and that the pressure on common stock prices due to much higher yields available elsewhere will very shortly be eased substantially! We think the words bear repeating at this time. The action of the market over the past week, to us, reflects continued confidence in the Administration's belief that the spectre of recess- ion has been laid to rest and the outlook is for further economic expansion in the fourth quar- ter of 1967 and on into 1968. It is, of course, the cyclical and semi-cyclical investment-grade companies who can be expected to be the chief beneficiaries of such an economic climate and it is Significant that, at this point in time, the to companies of this type. The market is obviously well past the so-called non-selective stage where almost everything does more or less well, and in order to achieve investment success in the latter half of 1967, some radical shifts will probably be necessary in a great many portfolios. In accordance with this thinking, we will continue next week with the review of individual industry groups started in last week's letter. Dow-JrJnes Ind. 923.77 Dow-Jones Rails 274.49 ANTHONY W. TABELL WALSTON & CO. INC. AWTamb Thill market letter ia pubhshed for your Ionvenlenee Bnd Information Rnd ig not an offer to sell or a soliCitation to buy Bny IM.CUTltle8 .hscuued The in. formation Was emDtoyee8 may obtained from BOurces we believe to be but have an Interest in or pUFchMe and sell the seeurltlf!'ll we refe rdroedntoot gullrantee heIeln Its accuracy Walston & Co., Inc. and Its officers. directors or WNBOl