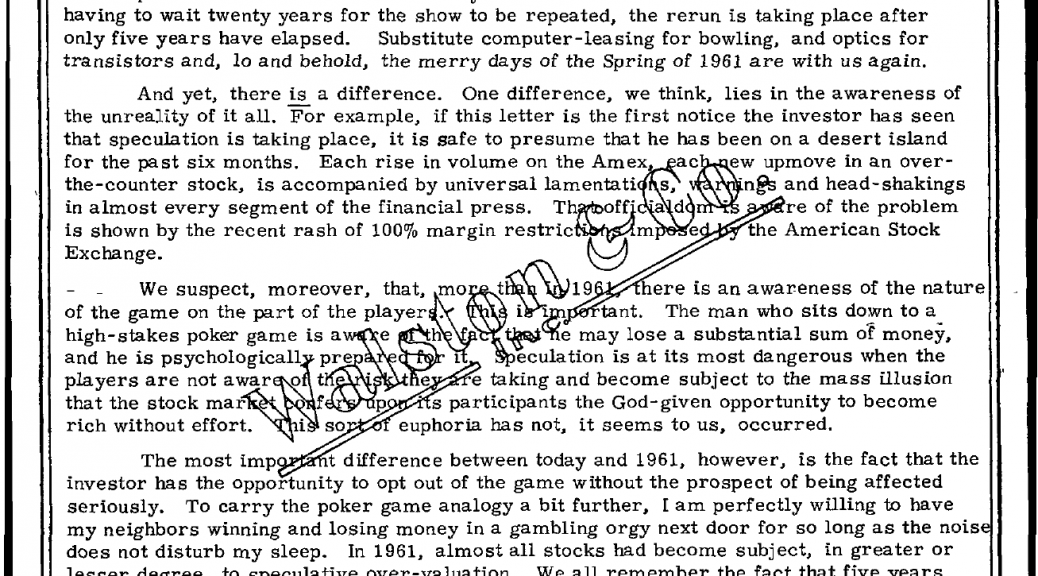 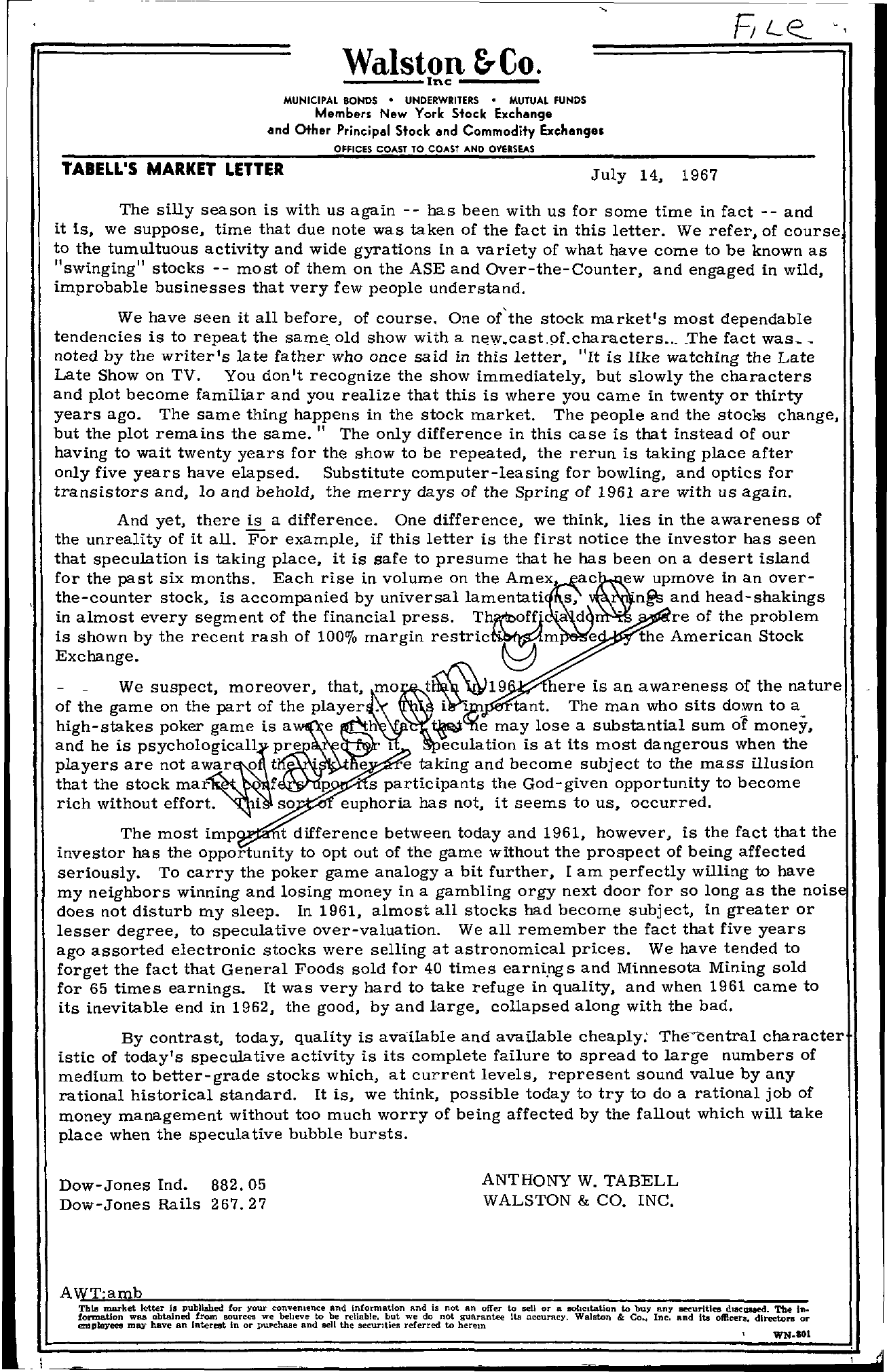 Walston & Co. Inc MUNICIPAL 8ON1S UNDERWRITERS MUTUAL FUNDS Members New York Stock Exchange and Other Principal Stock and Commodity Exchanges TABELL'S MARKET LETTER OFFICES COAST TO COAST AND OVERSEAS July 14, 1967 The silly season is with us again — has been with us for some time in fact — and it is, we suppose, time that due note was taken of the fact in this letter. We refer, of course to the tumultuous activity and wide gyrations in a variety of what have come to be known as swinging stocks — most of them on the ASE and Over-the-Counter, and engaged in wild, improbable businesses that very few people understand. We have seen it all before, of course. One or'the stock market's most dependable tendencies is to repeat the same old show with a new.cast,oLcharacters ….The fact was noted by the writer's late father who once said in this letter, It is like watching the Late Late Show on TV. You don't recognize the show immediately, but slowly the characters and plot become familiar and you realize that this is where you came in twenty or thirty years ago. The same thing happens in the stock market. The people and the stock change, but the plot remains the same. The only difference in this case is that instead of our having to wait twenty years for the show to be repeated, the rerun is taking place after only five years have elapsed. Substitute computer-leasing for bowling, and optics for transistors and, 10 and behold, the merry days of the Spring of 1961 are with us again. And yet, there is a difference. One difference, we think, lies in the awareness of the unreality of it all. For example, if this letter is the first notice the investor has seen that speculation is taking place, it is safe to presume that he has been on a desert island for the past six months. Each rise in volume on the upmove in an over- the-counter stock, is accompanied by universallamentati s, and head-shakings in almost every segment of the financial press. ThfYIDoffl'a d ' re of the problem is shown by the recent rash of 100 margin 8 e the American Stock – We suspect, moreover, that, mo of the game on the part of the player . high-stakes poker game is a e I'l here is an awareness of the nature tanto The man who sits do;;vn to a may lose a substantial sum of money, players are not awar 0 t . e e taking and become subject to the mass illusion that the stock mar f I! s participants the God-given opportunity to become rich without effort. i so euphoria has not, it seems to us, occurred. The most imp t difference between tOday and 1961, however, is the fact that the investor has the opportunity to opt out of the game without the prospect of being affected seriously. To carry the poker game analogy a bit further, I am perfectly willing to have my neighbors winning and losing money in a gambling orgy next door for so long as the noise does not disturb my sleep. In 1961, almost all stocks had become subject, in greater or lesser degree, to speculative over-valuation. We all remember the fact that five years ago assorted electronic stocks were selling at astronomical prices. We have tended to forget the fact that General Foods sold for 40 times earnipg s and Minnesota Mining sold for 65 times earnings. It was very hard to take refuge in quality, and when 1961 came to its inevitable end in 1962, the gOOd, by and large, collapsed along with the bad. By contrast, today, quality is avaIlable and available cheaply The–Central character istic of today's speculative activity is its complete failure to spread to large numbers of medium to better-grade stocks which, at current levels, represent sound value by any rational historical standard. It is, we think, possible today to try to do a rational job of money management without too much worry of being affected by the fallout which will take place when the speculative bubble bursts. Dow-Jones Ind. 882.05 Dow-Jones Rails 267.27 ANTHONY W. TABELL WALSTON & CO. INC. AWT;amb Thll! market letter Is published for your convemence and infonnatlon and is not an offer to sellar a sohcltatlon to buy any seeurittee dUlcusaed The formatJon waa obtained from sources we believe to be reliable. but we do not gUarantee Its accuracy, Wailiton & Co., Iru. and Its ofBeera or employees may have an Intereet in or pUl'cbase and sell the seeurltieB referred to berl!m