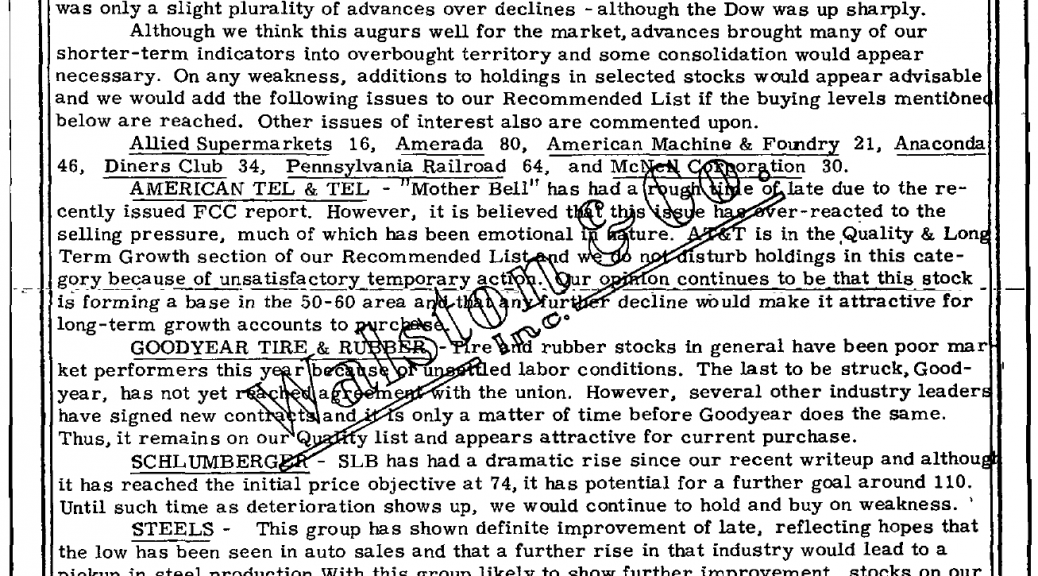 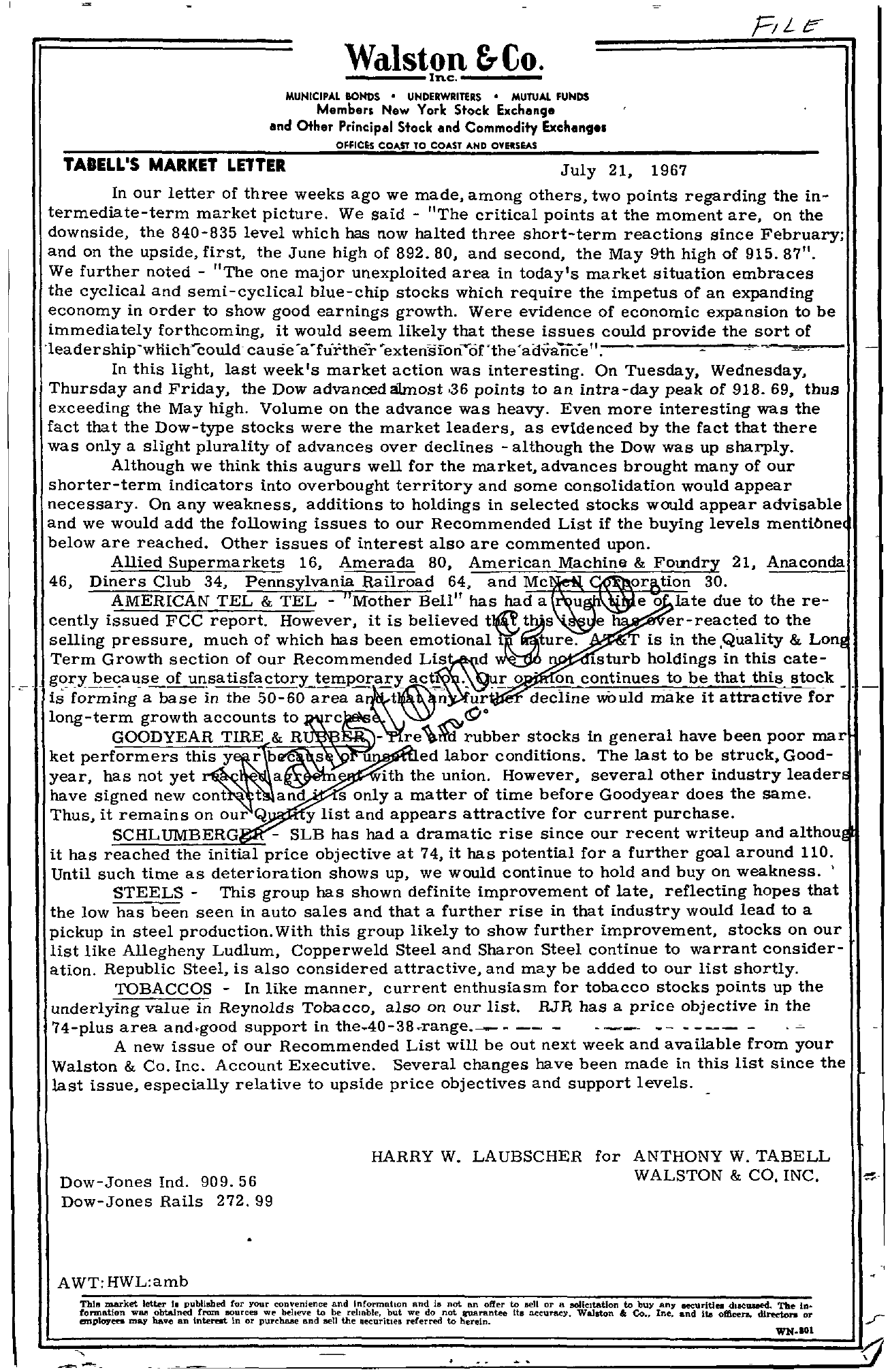 W- alstIoncn. S-Co. MUNICIPAL BONDS UNDERWRITRS MUTUAL FUNDS Members New York Stock Exchange and Other Principal Stock and Commodity Exchenge. TABELL'S MARKET LETTER OFFIC&S COAST TO COAST AND ovnSEAS July 21, 1967 In our letter of three weeks ago we made, among others, two points regarding the in- termediate-term market picture. We said – The critical pOints at the moment are, on the downside, the 840-835 level which has now halted three short-term reactions since February; and on the upside, first, the June high of 892.80, and second, the May 9th high of 915.87. We further noted – The one major unexploited area in today's market situation embraces the cyclical and semi-cyclical blue-chip stocks which require the impetus of an expanding economy in order to show good earnings growth. Were evidence of economic expansion to be immediately forthcoming, it would seem likely that these issues could provide the sort of 'leadership'wliich-could cause-a-furthe-r 'the 'ad-vanc-e;— In this light, last week's market action was interesting. On Tuesday, Wednesday, Thursday and Friday, the Dow advanced almost ,36 points to an intra -day peak of 918. 69, thus exceeding the May high. Volume on the advance was heavy. Even more interesting was the fact that the Dow-type stocks were the market leaders, as evidenced by the fact that there was only a slight plurality of advances over declines – although the Dow was up sharply. Although we think this augurs well for the market, advances brought many of our shorter-term indicators into overbought territory and some consolidation would appear necessary. On any weakness, additions to holdings in selected stocks would appear advisable and we would add the following issues to our Recommended List if the buying levels mentibne below are reached. Other issues of interest also are commented upon. Allied Supermarkets 16, Amerada 80, American Machine & Fomdry 21, Anaconda 46, Diners Club 34, Pennsylvania Railroad 64, and Mc or tion 30. AMERICAN TEL & TEL – Mother Bell has had a u e 0 late due to the re- cently issued FCC report. However, it is believed . er-reacted to the selling pressure, much of which has been emotional 1 xure. is in the ,Quality & Lon Term Growth section of our Recommended lsturb holdings in this cate- . .! o' on continues to be that this stock . is forming a base in the 50-60 area long-term growth accounts to rc GOODYEAR TIRE & R W ur decline wOuld make it attractive for – re'\rYd rubber stocks in general have been poor mar ket performers this y r b ed labor conditions. The last to be struck, Good- year, has not yet ith the union. However, several other industry leader have signed new cont t and' s only a matter of time before Goodyear does the same. Thus, it remains on our Q y list and appears attractive for current purchase. SCHLUMBERG – SLB has had a dramatic rise since our recent writeup and althou it has reached the initial price objective at 74, it has potential for a further goal around 110. Until such time as deterioration shows up, we would continue to hold and buy on weakness. ' STEELS – This group has shown definite improvement of late, reflecting hopes that the low has been seen in auto sales and that a further rise in that industry would lead to a pickup in steel production. With this group likely to show further improvement, stocks on our list like Allegheny Ludlum, Copperweld Steel and Sharon Steel continue to warrant consider- ation. Republic Steel, is also considered attractive, and may be added to our list shortly. TOBACCOS – In like manner, current enthusiasm for tobacco stocks pOints up the underlying value in Reynolds Tobacco, also on our list. RJR has a price objective in the 74-plus area and.good support in – — – . — .- – — – . A new issue of our Recommended List will be out next week and available from your Walston & Co. Inc. Account Executive. Several changes have been made in this list since the last issue, especially relative to upside price objectives and support levels. Dow-Jones Ind. 909.56 Dow-Jones Rails 272. 99 HARRY W. LAUBSCHER for ANTHONY W. TABELL WALSTON & CO. INC. AWTHWLamb Thill market letter 1. published for your convenience and Information llnd ia not an offer formation employees W&!I may obt&l.ned from sources have an inter8t in or we believe to be rehable, but Bnd sell the lIecnritlea rweeferdroedntoot tuArantee herein. to eell or a soliCitation to buy Us accuracy. Walston & Co an,. Ine. eec\Iriti and ite eo.ffdilclelCr.u. udedlr.t eTthoen In-. 01' .. ,,-