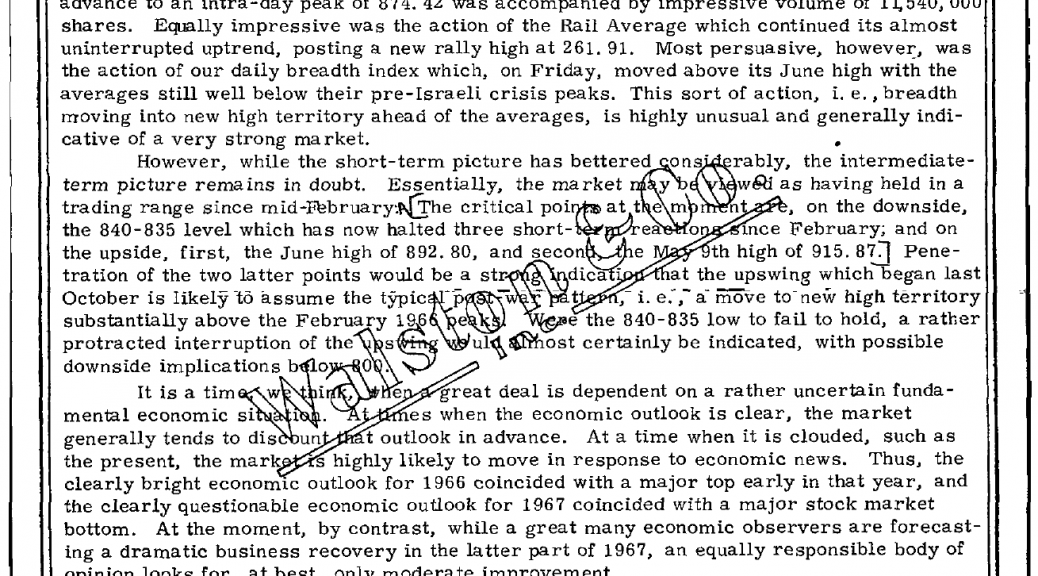 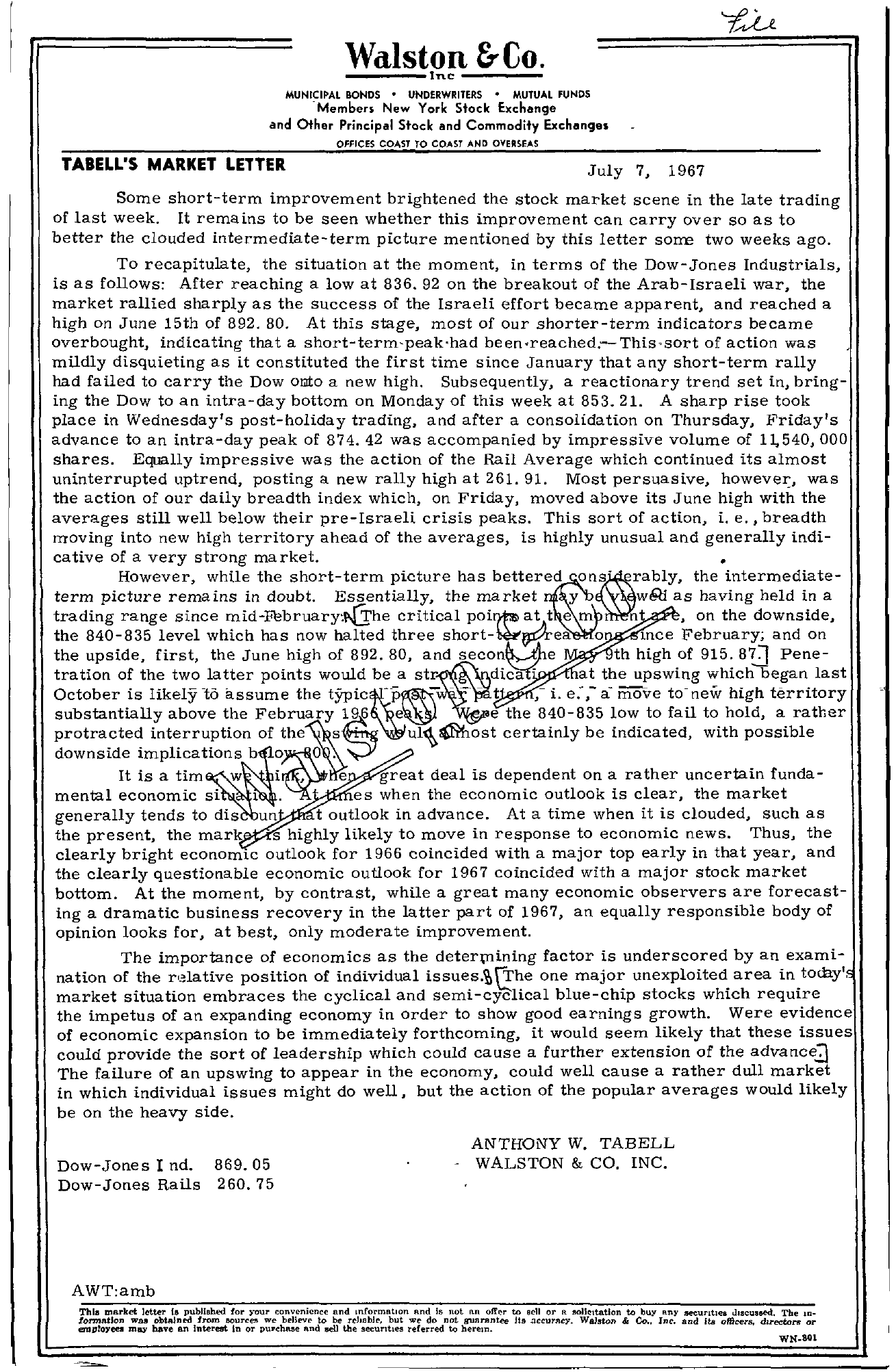 TABELL'S MARKET W- – – -a- 1lston-&- -C-o-. MUNICIPAL BONOS UNDERWRITERS MUTUAL FUNDS New York Stock Exchange and Other Principal Stock and Commodity Exchanges LETTER OFFICES COAST TO COAST AND OVERSEAS July 7, 1967 Some short-term improvement brightened the stock market scene in the late trading of last week. It remains to be seen whether this improvement can carryover so as to better the clouded intermediate-term picture mentioned by this letter sorre two weeks ago. To recapitulate, the situation at the moment, in terms of the Dow-Jones Industrials, is as follows After reaching a low at 836. 92 on the breakout of the Arab- Israeli war, the market rallied sharply as the success of the Israeli effort became apparent, and reached a high on June 15th of 892.80. At this stage, most of our shorter-term indicators became overbought, indicating that a short-term'peak'had beenreached.-Thissort of action was mildly disquieting as it constituted the first time since January that any short-term rally had failed to carry the Dow ouIto a new high. Subsequently, a reactionary trend set in, bring- ing the Dow to an intra-day bottom on Monday of this week at 853.21. A sharp rise took place in Wednesday's post-holiday trading, and after a consolidation on Thursday, Friday's advance to an intra-day peak of 874.42 was accompanied by impressive volume of 11.,540,000 shares. Equally impressive was the action of the Rail Average which continued its almost uninterrupted uptrend, posting a new rally high at 261. 91. Most persuasive, however, was the action of our daily breadth index which, on Friday, moved above its June high with the averages still well below their pre- Israeli crisis peaks. This sort of action, 1. e. , breadth moving into new high territory ahead of the averages, is highly unusual and generally indi- cative of a very strong market. However, while the short-term picture has the intermediate- term picture remains in doubt. Essentially, the market y weJ as having held in a trading range since critical poirytz at tern n , on the downside, the 840-835 level which has now halted three 0 lnce February; and on the upside, first, the June high of 892.80, and th high of 915.871 Pene- tration two latter points woul.d October is llkely to assume the t ,- 1. e., a move to' new high terntory substantially above the February 196 e the 840-835 low to fail to hold, a rather protracted interruption of downside implications b V certainly be indicated, with possible It is a tim w i , e great deal is dependent on a rather uncertain funda- mental economic si 1. es when the economic outlook is clear, the market generally tends to dis At a time when it is clouded, such as the present, the mark s highly likely to move in response to economic news. Thus, the clearly bright economiC outlook for 1966 coincided with a major top early in that year, and the clearly questionable economic outlook for 1967 coincided with a major stock market bottom. At the moment, by contrast, while a great many economic observers are forecast- ing a dramatic business recovery in the latter part of 1967, an equally responsible body of opinion looks for, at best, only moderate improvement. The importance of economics as the deteqnining factor is underscored by an exami- nation of the r'3lative position of individual Q'he one major unexploited area in towy', market situation embraces the cyclical and semi-cyclical blue-chip stocks which require the impetus of an expanding economy in order to show good earnings growth. Were evidence of economic expansion to be immediately forthcoming, it would seem likely that these issues could provide the sort of leadership which could cause a further extension of the advance The failure of an upswing to appear in the economy, could well cause a rather dull market in which individual issues might do well, but the action of the popular averages would likely be on the heavy side. Dow-Jones Ind. 869.05 Dow-Jones Rails 260.75 ANTHONY W. TABELL WALSTON & CO. INC. AWTamb Thill market letter (s published for )'our conve-nienee and mformatlon Rnd Is not Rn formatJon enJDloYeelil W8.! may obtained have an from BOuret'!! Interest in or pwupechbaeslieevaendtosclb1e uhable, but the secUrities we do not referred to 81IRrantee herein. to Bell or II. soliCitation to buy lts .accurncy. Walston & Co.. !lny Inc. seeUTltH1I U1IICU8sed, The and Its offlcers. dlrectors In- or WNSOI