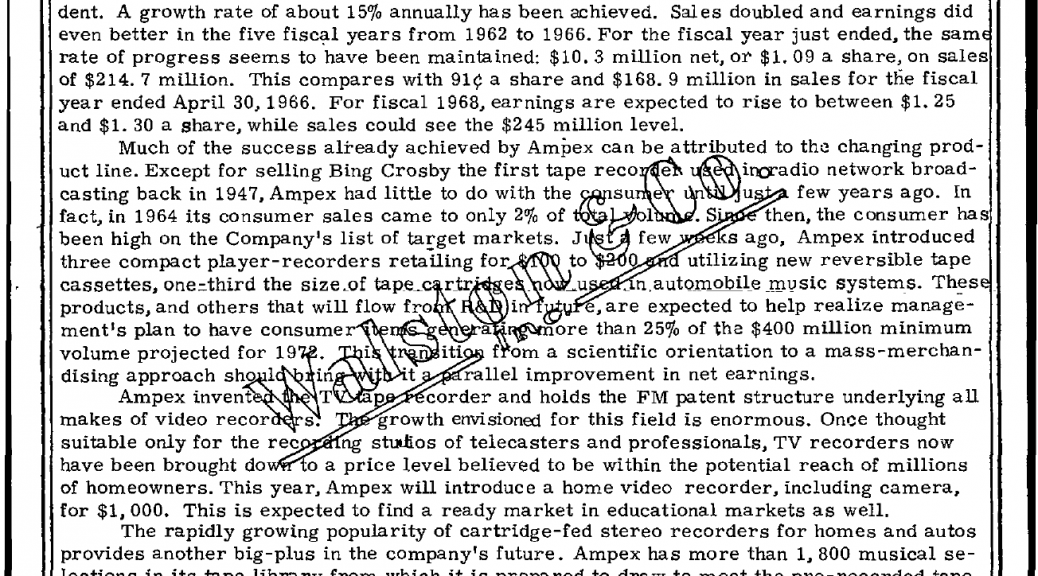 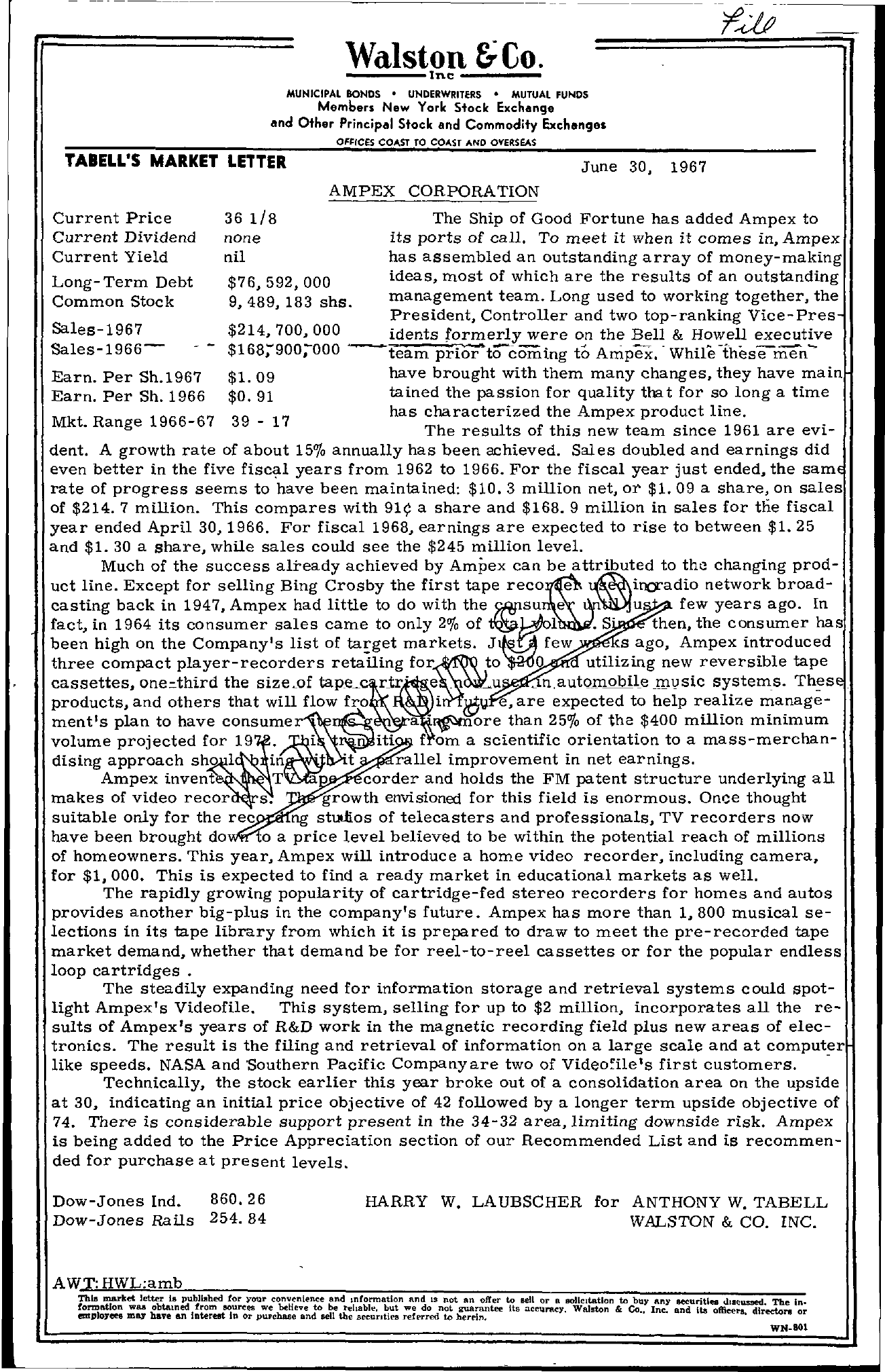 – — — — – TABELL'S Walston &Co. —-Inc —- MUNICIPAL BONOS UNDERWRITERS MUTUAL FUNDS Members New York Stock Exchange and Other Principal Stock and Commodity Exchanges MARKET LETTER OFl'Ces COAST TO COAST AND OVeRSEAS June 30, 1967 AMPEX CORPORATION Current Price 36 1/8 The Ship of Good Fortune has added Ampex to Current Dividend none its ports of call. To meet it when it comes in, Ampex Current Yield nil has assembled an outstanding array of money-making Long-Term Debt Common Stock Sales-1967 Sales-1966- 76,592,000 9,489, 183 shs. ideas, most of which are the results of an outstanding management team. Long used to working together, the President, Controller and two top-ranking Vice- Pres 214,700,000 168900;-000 idents formerly were -team priortocoming on the Bell to Ampex. W& hHiloew-tehlel executiv semen- e Earn. Per Sh.1967 1. 09 Earn. Per Sh.1966 0.91 have brought with them many changes, they have main tained the passion for quality that for so long a time Mkt. Range 1966-67 39 – 17 has characterized the Ampex product line. The results of this new team since 1961 are evi- dent. A growth rate of about 150/0 annually has been achieved. Sales doubled and earnings did even better in the five fiscal years from 1962 to 1966. For the fiscal year just ended, the sam rate of progress seems to have been maintained 10.3 million net, or 1. 09 a share, on sales of 214.7 million. This compares with 91 a share and 168. 9 million in sales for the fiscal year ended April 30,1966. For fiscal 1968, earnings are expected to rise to between 1. 25 and 1. 30 a share, while sales could see the 245 million level. Much of the success alr-eady achieved by Ampex can be attributed to the changing prod- uct line. Except for selling Bing Crosby the first tape network broad- casting back in 1947, Ampex had little to do with the e few years ago. In fact, in 1964 its consumer sales came to only 20/0 of . S then, the consumer has been high on the Company's list of target markets. few s ago, Ampex introduced three compact player-recorders retailing utilizing new reversible tape cassettes, onethird the sizeof products, and others that will flow fro e i (!5Yue, n,autQJ1.obile are expected to IDusic help re systems. Thes alize manage- ment's plan to have a than 250/0 of the 400 million minimum volume projected for 19 f om a scientific orientation to a mass-merchan- dising approach sho 1 in t rallel improvement in net earnings. Ampex invent T corder and holds the FM patent structure underlying all makes of video recor s. growth envisioned for this field is enormous. Once thought suitable only for the rec ng stutJios of telecasters and professionals, TV recorders now have been brought do to a price level believed to be within the potential reach of millions of homeowners. This year, Ampex will introduce a home video recorder, including camera, for 1,000. This is expected to find a ready market in educational markets as well. The rapidly growing popularity of cartridge-fed stereo recorders for homes and autos provides another big-plus in the company's future. Ampex has more than 1,800 musical se- lections in its tape library from which it is prepared to draw to meet the pre-recorded tape market demand, whether that demand be for reel-to-reel cassettes or for the popular endless loop cartridges . The steadily expanding need for information storage and retrieval systems could spot- light Ampex's Videofile. This system, selling for up to 2 million, incorporates all the re- sults of Ampex's years of R&D work in the magnetic recording field plus new areas of elec- tronics. The result is the filing and retrieval of information on a large scale and at like speeds. NASA and Southern Pacific Company are two of first customers. Technically, the stock earlier this year broke out of a consolidation area on the upside at 30, indicating an initial price objective of 42 followed by a longer term upside objective of 74. There is considerable support present in the 34-32 area, limiting downside risk. Ampex is being added to the Price Appreciation section of our Recommended List and is recommen- ded for purchase at present levels. Dow-Jones Ind. 860.26 Dow-Jones Rails 254. 84 HARRY W. LAUBSCHER for ANTHONY W. TABELL WALSTON & CO. INC. AWT HWLamb This market letter 18 publillbed for your convenience and antonnation and IS not an offer to sell or a soliCitation to buy Any BeC!uritiea dillcuued. The In formation ftd.ploYee8 was mD,)' obtained from sourees we believe to be r-ehable, but have an interest in or purchase Ilnd sell the securIties we re!e do rre dntoot guarantee berein. its Waldon &; Co., Ine. Ilnd ita offi.I'S, directors or WN.801