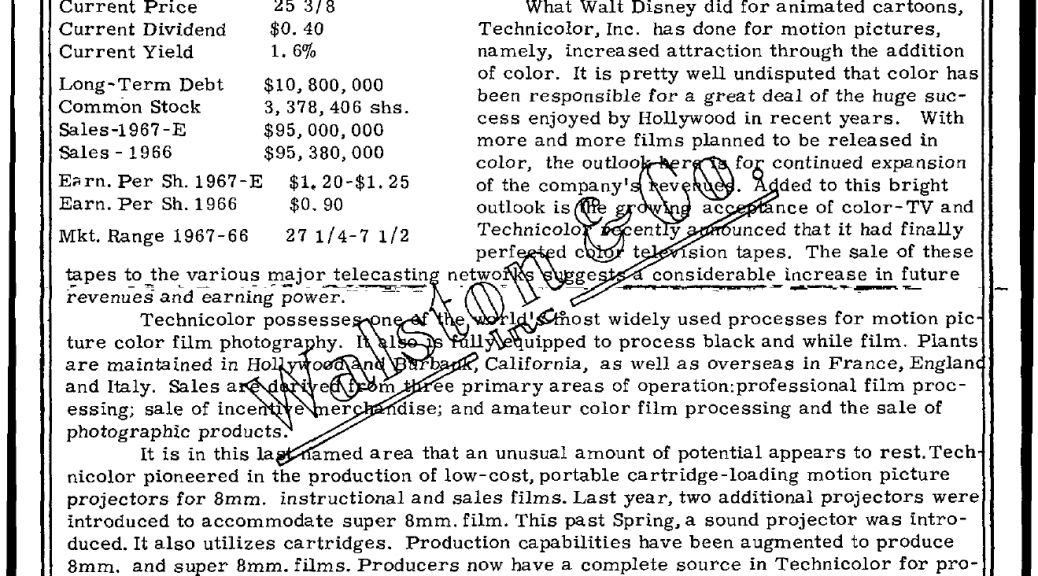 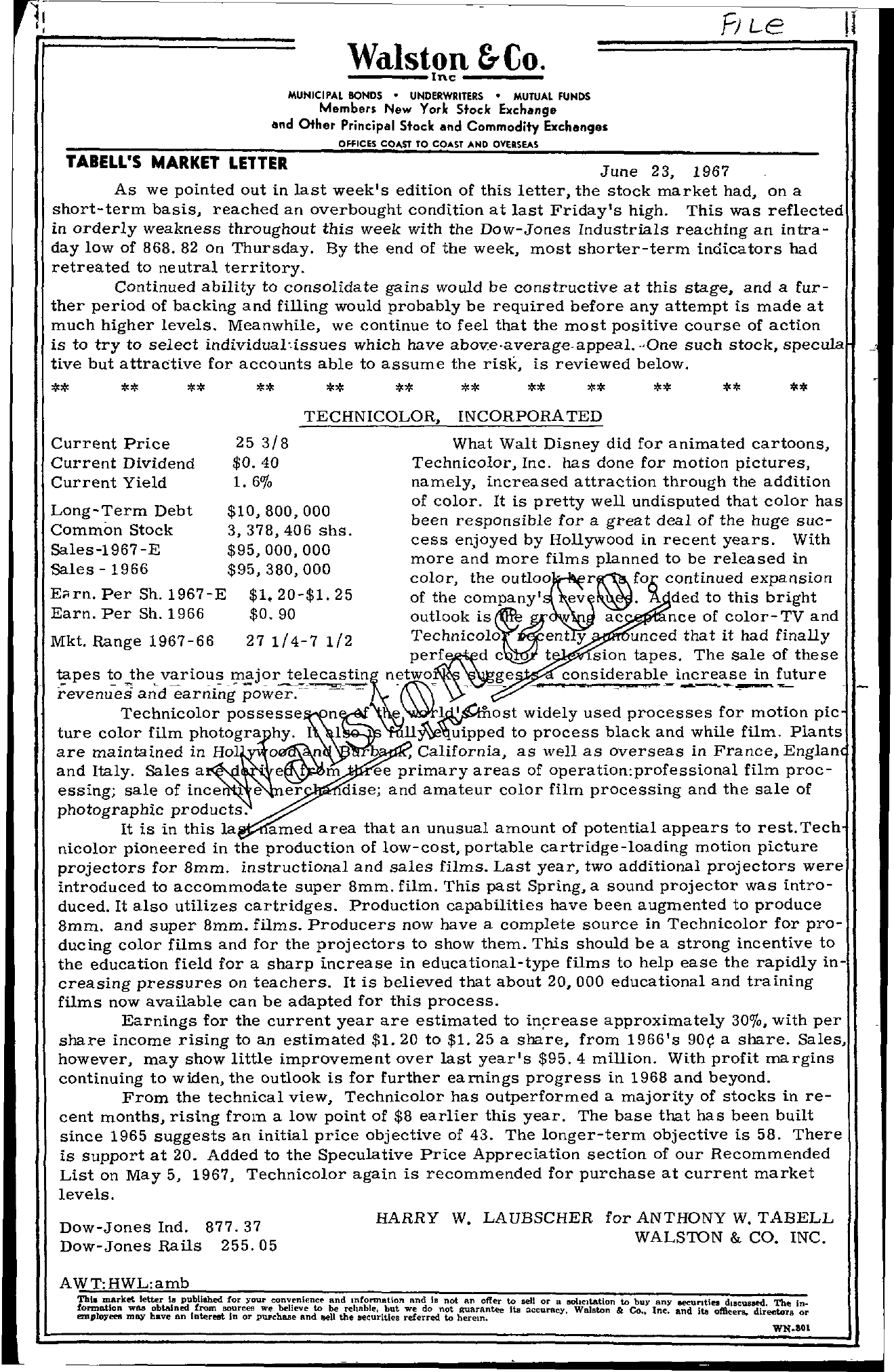 Walston &Co. – – – – – I n c – – F) Le If MUNICIPAL BONOS UNDERWRITERS MUTUAL FUNDS Members New York Stock Exchange and Other Principal Stock and Commodity Exchanges OFFICES COA.ST TO COAST AND OVERSEAS TABELL'S MARKET LETTER June 23, 1967 As we pointed out in last week's edition of this letter, the stock market had, on a short-term basis, reached an overbought condition at last Friday's high. This was reflected in orderly weakness throughout this week with the Dow-Jones Industrials reaching an intra- day low of 868. 82 On Thursday. By the end of the week, most shorter-term indicators had retreated to neutral territory. Continued ability to consolidate gains would be constructive at this stage, and a further period of backing and filling would probably be required before any attempt is made at much higher levels. Meanwhile, we continue to feel that the most positive course of action is to try to select individual.issues which have above.average.appeal. One such stock, specula tive but attractive for accounts able to assume the risk, is reviewed below. TECHNICOLOR, INCORPORATED Current Price Current Dividend Current Yield 25 3/8 0.40 1. 60/0 What Walt Disney did for animated cartoons, Technicolor, Inc. has done for motion pictures, namely, increased attraction through the addition Long-Term Debt 10,800,000 Common Stock Sales-1967-E 39,357,080,400,060s0hs. Sales – 1966 95 380 000 Elrn. Per Sh. 1967-E 1,20-1. 25 Earn. Per Sh. 1966 0.90 of color. It is pretty well undisputed that color has been cess erensjopyoendsibbyleHfoolrlyawogored at deal of in recent the huge years. sucWith more and more films planned to be released in color, the of the company' ev continued expansion '!\ ded to this bright outlook i S a ac nce of color-TV and Mkt. Range 1967-66 271/4-7 1/2 Technicolo c ent y unced that it had finally t sion tapes. The sale of these .,!he revenues anc d earning power. -. – 1\'\\- -fe .- f-u-ture Technicolor widely used processes for motion pic ture color film photogra hy. I I to process black and while film. Plants are maintained in HoI ,California, as well as overseas in France, Englan and Italy. Sales a . ee primary areas of operationprofessional film proc- essing; sale of ince e er (lise; and amateur color film processing and the sale of photographic products. It is in this la amed area that an unusual amount of potential appears to rest. Tech nicolor pioneered in the production of low-cost, portable cartridge-loading motion picture projectors for 8mm. instructional and sales films. Last year, two additional projectors were introduced to accommodate super 8mm. film. This past Spring, a sound projector was intro- duced. It also utilizes cartridges. Production capabilities have been augmented to produce 8mm. and super 8mm. films. Producers now have a complete source in Technicolor for pro- ducing color films and for the projectors to show them. This should be a strong incentive to the education field for a sharp increase in educational-type films to help ease the rapidly in- creasing pressures on teachers. It is believed that about 20, 000 educational and training films now available can be adapted for this process. Earnings for the current year are estimated to approximately 300/0, with per share income rising to an estimated 1. 20 to 1. 25 a share, from 1966's 90 a share. Sales, however, may show little improvement over last year's 95.4 million. With profit margins continuing to widen, the outlook is for further earnings progress in 1968 and beyond. From the technical view, Technicolor has outperformed a majority of stocks in re- cent months, rising from a low point of 8 earlier this year. The base that has been built since 1965 suggests an initial price objective of 43. The longer-term objective is 58. There is support at 20. Added to the Speculative Price Appreciation section of our Recommended List on May 5, 1967, Technicolor again is recommended for purchase at current market levels. Dow-Jones Ind. 877.37 Dow-Jones Rails 255.05 HARRY W. LAUBSCHER for ANTHONY W. TABELL WALSTON & CO. INC. AWTHWLamb Thl. market letter III publllhed for your and tnfonnatlon Rnd Is not an offer to sell or a solicitAtion to buy any eeeurities dlaeussed Th i efomrgmlao.ytleoens mwaays hoabvtaeinaend Infrtoemr!8tsoIunrcoers PwUePcbheaslieevAendto8eb1le thne!hsaebcleu,ritbiuest rweeferdroedntoot hgeuraerinan. tee Ita accuracy . Walston It Co. Inc and Ita offi('!ers. 8 onr WN301