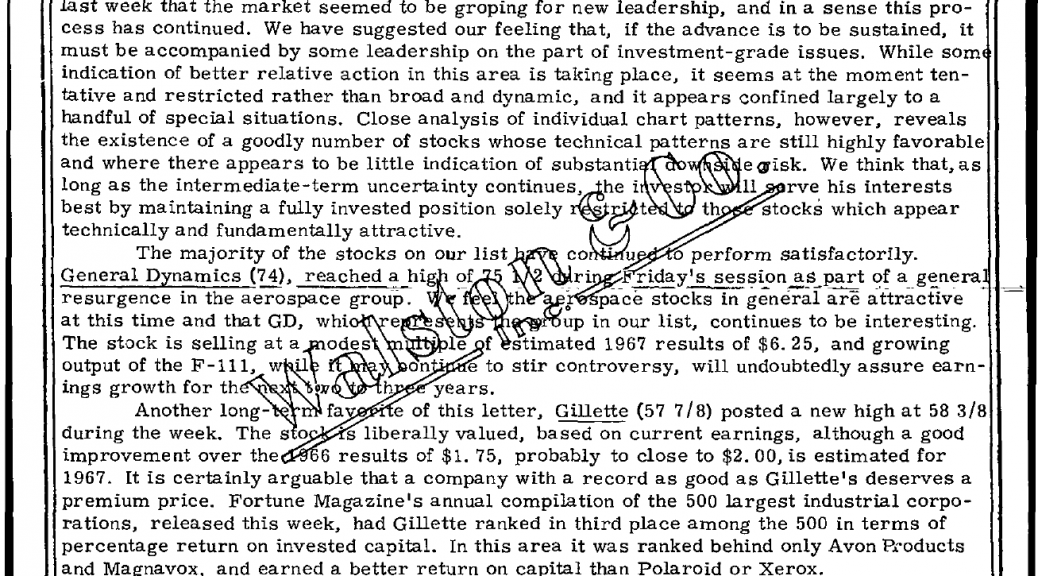 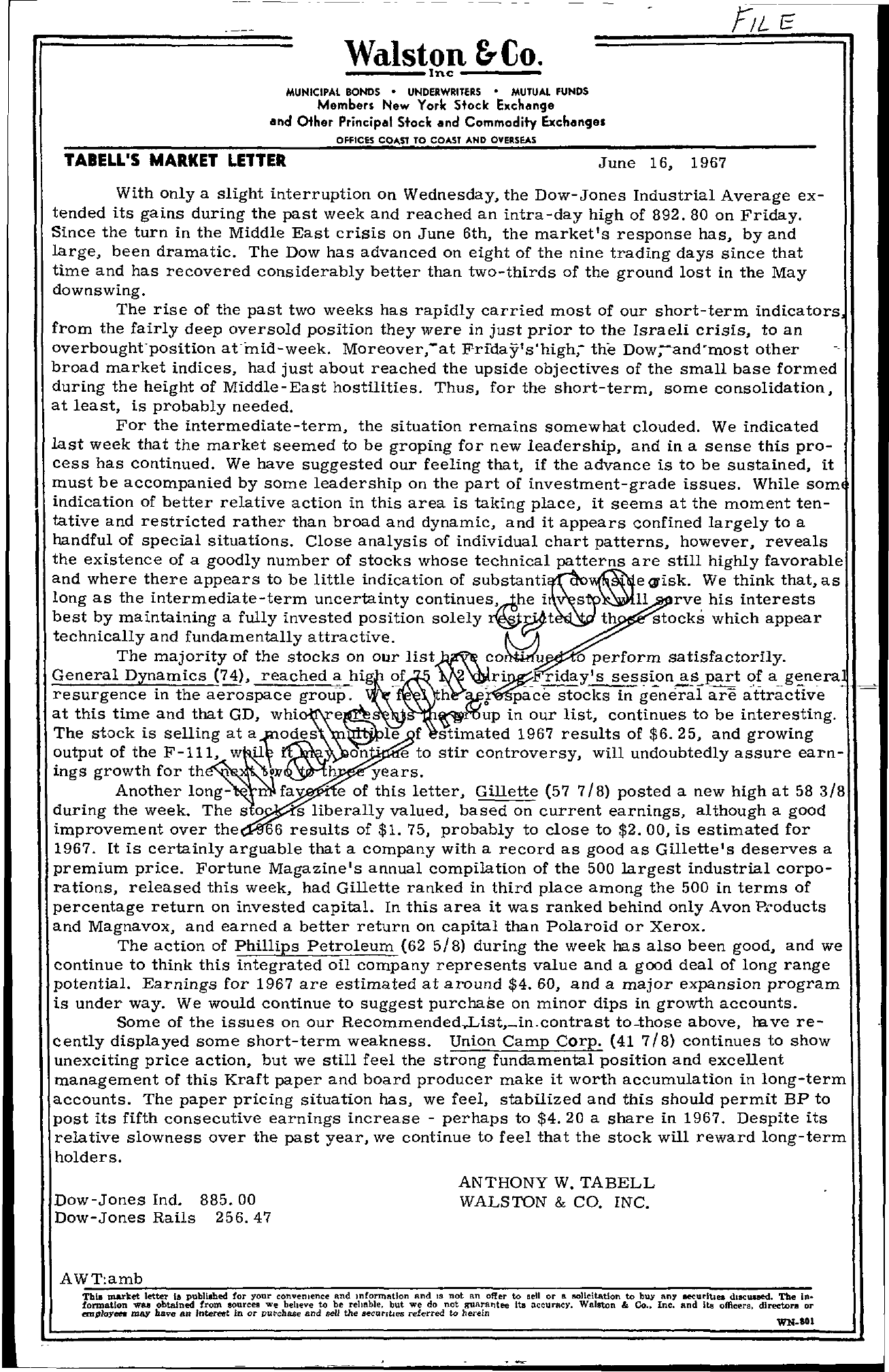 Walston &Co. —';'-Inc MUNICIPAL BONOS UNDERWRITERS MUTUAL FUNDS Members New York Stock Exchange and Other Principal Stock and Commodity Exchanges OFFICES COA,ST TO COAST AND OVERSEAS TABELL'S MARKET LETTER June 16, 1967 With only a slight interruption on Wednesday, the Dow-Jones Industrial Average ex- tended its gains during the past week and reached an intra-day high of 892.80 on Friday. Since the turn in the Middle East crisis on June 6th, the market's response has, by and large, been dramatic. The Dow has advanced on eight of the nine trading days since that time and has recovered considerably better than two-thirds of the ground lost in the May downswing. The rise of the past two weeks has rapidly carried most of our short-term indicators from the fairly deep oversold position they were in just prior to the Israeli crisis, to an overbought'position atinid-week. Moreover,-at Frfday's'high,- the Dow;-and'most other broad market indices, had just about reached the upside objectives of the small base formed during the height of Middle- East hostilities. Thus, for the short-term, some consolidation, at least, is probably needed. For the intermediate-term, the situation remains somewhat clouded. We indicated last week that the market seemed to be groping for new leadership, and in a sense this pro- cess has continued. We have suggested our feeling tha t, if the advance is to be sustained, it must be accompanied by some leadership on the part of investment-grade issues. While som indication of better relative action in this area is taking place, it seems at the moment ten- tative and restricted rather than broad and dynamic, and it appears confined largely to a handful of special situations. Close analysis of individual chart patterns, however, reveals the existence of a goodly number of stocks whose technical patterns are still highly favorable and where there appears to be little indication of We think that,as long as the intermediate-term uncertainty continues,Ahe i s rve, his interests best by maintaining a fully invested position solely technically and fundamentally attractive. 1\ Y th stocks which appear The majority of the stocks on our listmr0MIri'u 0 perform satisfactorily. General Dynamics (74), reached a ridayls sessi.on ()f a.. resurgence in the aerospace group. h stocks in general are a ttrachve at this time and that GD, whi e in our list, continues to be interesting. output of the w il on – e to stir controversy, will undoubtedly assure earn- ings growth for th .11 h years. Another long- fa – e of this letter, Gillette (57 7/8) posted a new high at 58 3/8 during the week. The s 0 's liberally valued, based on current earnings, although a good improvement over the 6 results of 1. 75, probably to close to 2.00, is estimated for 1967. It is certainly arguable that a company with a record as good as Gillette's deserves a premium price. Fortune Magazine's annual compilation of the 500 largest industrial corpo- rations, released this week, had Gillette ranked in third place among the 500 in terms of percentage return on invested capital. In this area it was ranked behind only Avon P..'oducts and Magnavox, and earned a better return on capital than PolarOid or Xerox. The action of Phillips Petroleum (62 5/8) during the week has also been good, and we continue to think this integrated oil company represents value and a good deal of long range potential. Earnings for 1967 are estimated at around 4. 60, and a major expansion program is under way. We would continue to suggest purchase on minor dips in growth accounts. Some of the issues on our Recommended.,List,in,contrast to-those above, IR ve re- cently displayed some short-term weakness. Union Camp Corp. (41 7/8) continues to show unexciting price action, but we still feel the strong fundamental position and excellent management of this Kraft paper and board producer make it worth accumulation in long-term accounts. The paper priCing situation has, we feel, stabilized and this should permit BP to post its fifth consecutive earnings increase – perhaps to 4.20 a share in 1967. Despite its relative slowness over the past year, we continue to feel that the stock will reward long-term holders. Dow-Jones Ind. 885. 00 Dow-Jones Rails 256.47 ANTHONY W. TABELL WALSTON & CO. INC. AWTamb This m formati ark on eWt8Jie! ttoe1b'taiillnepdubflrioshmedsofourrceytol uwr ecobnevheemveentcoe and mformatlon and IS not an offer be reliable. but we do not gURrafltee to Bell or a solicitation to buy ita accuracy. Walston & Co., any Inc. and Its dtacuued. The in. officers, dlreetora or mAT have an JntereJt In or pUl'chase and sell the securItIes referred to herein WNlOl