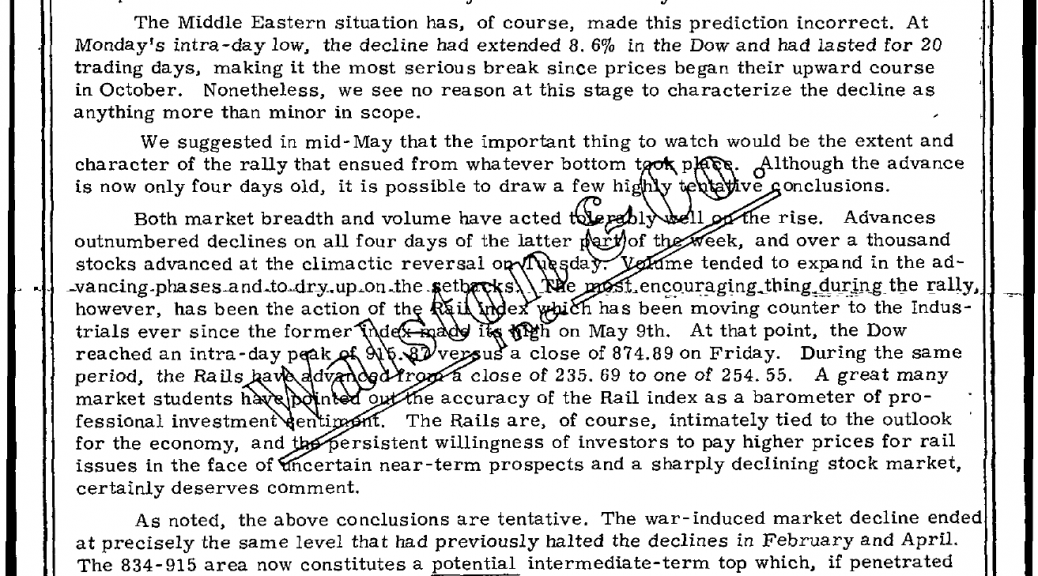 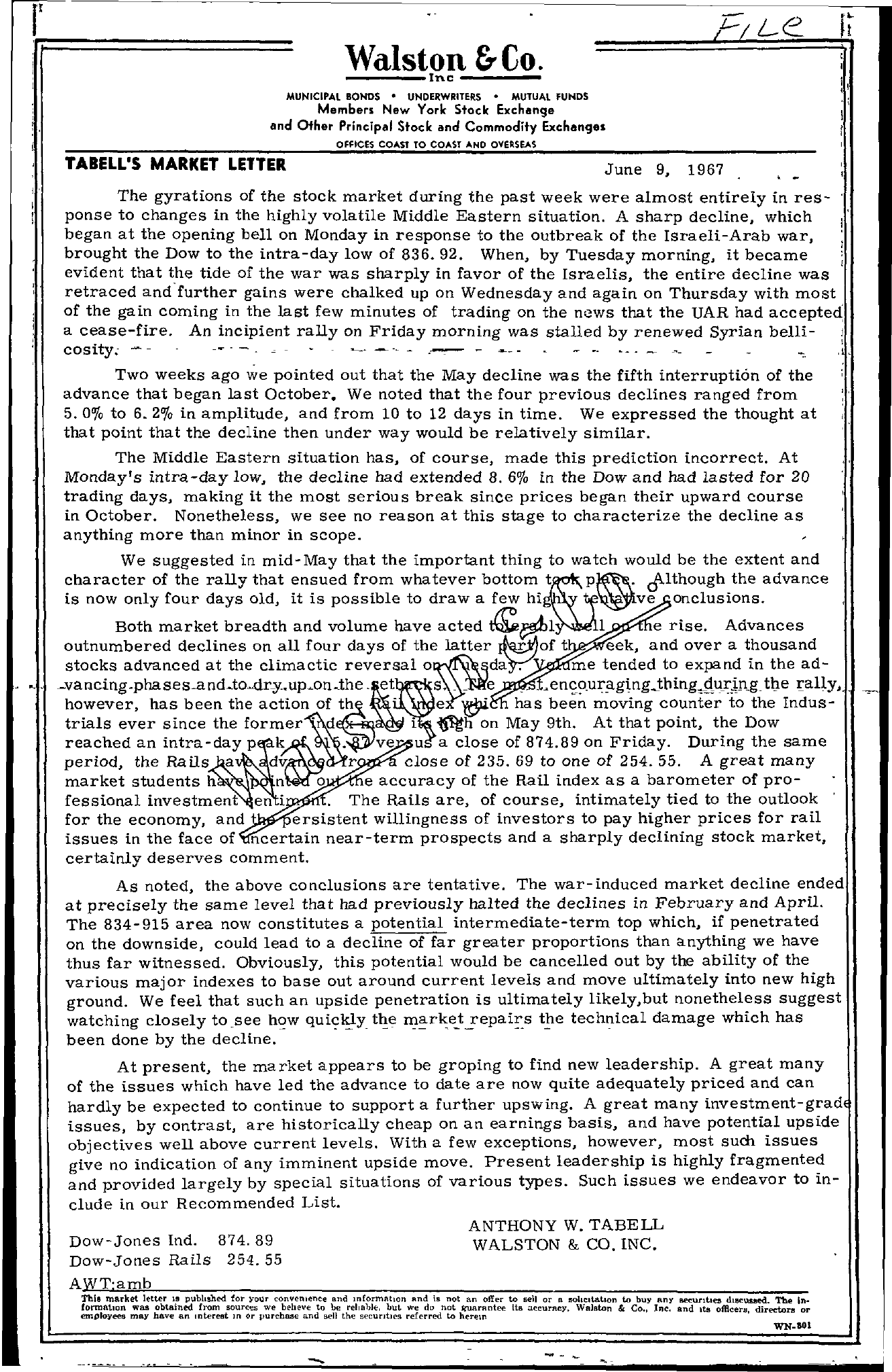 W—-a–l-s-Itnocn—&–C–o–. MUNICIPAL BONDS UNDERWRITERS MUTUAL FUHDS Members New York Stock Exchange and Other Principal Stock and Commodity Exchanges OFFICES COAST TO COAST AND OVERSEAS TABELL'S MARKET LETTER June 9, 1967 The gyrations of the stock market during the past week were almost entirely in res- ponse to changes in the highly volatile Middle Eastern situation. A sharp decline, which began at the opening bell on Monday in response to the outbreak of the Israeli-Arab war, brought the Dow to the intra-day low of 836.92. When, by Tuesday morning, it became evident that the tide of the war was sharply in favor of the Israelis, the entire decline was retraced and further gains were chalked up on Wednesday and again on Thursday with most of the gain coming in the last few minutes of trading on the news that the UAR had a cease-fire. An incipient rally on Friday morning was stalled by renewed Syrian belli- cosity; — -', – , – – –' ' Two weeks ago we pOinted out that the May decline was the fifth interruption of the advance that began last October. We noted that the four previous declines ranged from 5.0 to 6.2 in amplitude, and from 10 to 12 days in time. We expressed the thought at that point that the decline then under way would be relatively similar. The Middle Eastern situation has, of course, made this prediction incorrect. At Monday's intra-day low, the decline had extended 8. 6 in the Dow and had lasted for 20 trading days, making it the most serious break since prices began their upward course in October. Nonetheless, we see no reason at this stage to characterize the decline as anything more than minor in scope. We suggested in mid-May that the important thing to watch would be the extent and character of the rally that ensued from whatever bottom d'-lthough the advance is now only four days old, it is possible to draw a few hi onclusions. Both market breadth and volume have acted I e rise. Advances outnumbered declines on all four days of the latter t eek, and over a thousand stocks advanced at the climactic reversal me tended to expand in the ad- however, has been the action of trials ever since the Ii e t\le rally .e has been moving counter to the Indus- i On May 9th. At that point, the Dow reached an intra-day p ve u a close of 874.89 on Friday. During the same period, the Rails a dv. r close of 235. 69 to one of 254.55. A great many market students h 'n 0 e accuracy of the Rail index as a barometer of pro- fessional investment The Rails are, of course, intimately tied to the outlook for the economy, and ersistent willingness of investors to pay higher prices for rail issues in the face of ncertain near-term prospects and a sharply declining stock market, certainly deserves comment. As noted, the above conclusions are tentative. The war-induced market decline at precisely the same level that had previously halted the declines in February and April. The 834-915 area now constitutes a potential intermediate-term top which, if penetrated on the downside, could lead to a decline of far greater proportions than anything we have thus far witnessed. Obviously, this potential would be cancelled out by the ability of the various major indexes to base out around current levels and move ultimately into new high ground. We feel that such an upside penetration is ultimately likely, but nonetheless suggest watching closely tO,see t,!e t!Ie technical damage which has been done by the decline. At present, the market appears to be groping to find new leadership. A great many of the issues which have led the advance to date are now quite adequately priced and can hardly be expected to continue to support a further upswing. A great many investment-o'r .. issues, by contrast, are historically cheap on an earnings basis, and have potential upside objectives well above current levels. With a few exceptions, however, most sum issues give no indication of any imminent upside move. Present leadership is highly fragmented and provided largely by special situations of various types. Such issues we endeavor to in- clude in our Recommended List. Dow-Jones Ind. 874.89 Dow-Jones Rails 254.55 ANTHONY W. TABELL WALSTON & CO. INC. AWT;amb This market letter 1.11 published for our convemence ana InfOrmatIOn and Is not an offer to sell or Il i!!OllCltatlon to buy any r.ecurlbes dlscuued. The In- formation was obtamed from we believe to be r!llobll, but we do not rroarRntee Its Walston & Co., Inc. and lts officera. direetol'/!l or enoloYee8 may have an Intereat In Or purehase and sell the securities referred to herein WNlOl —