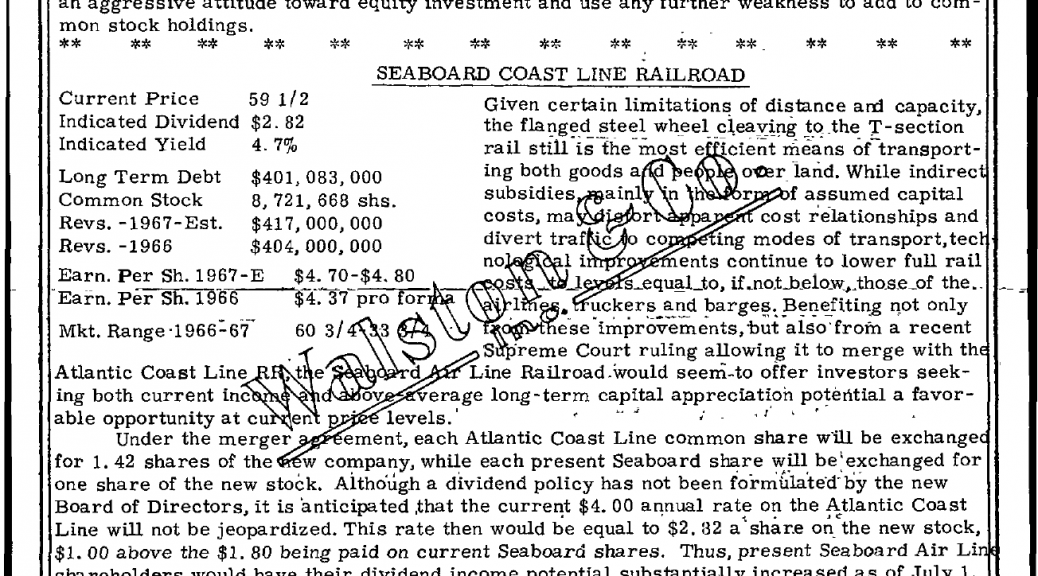 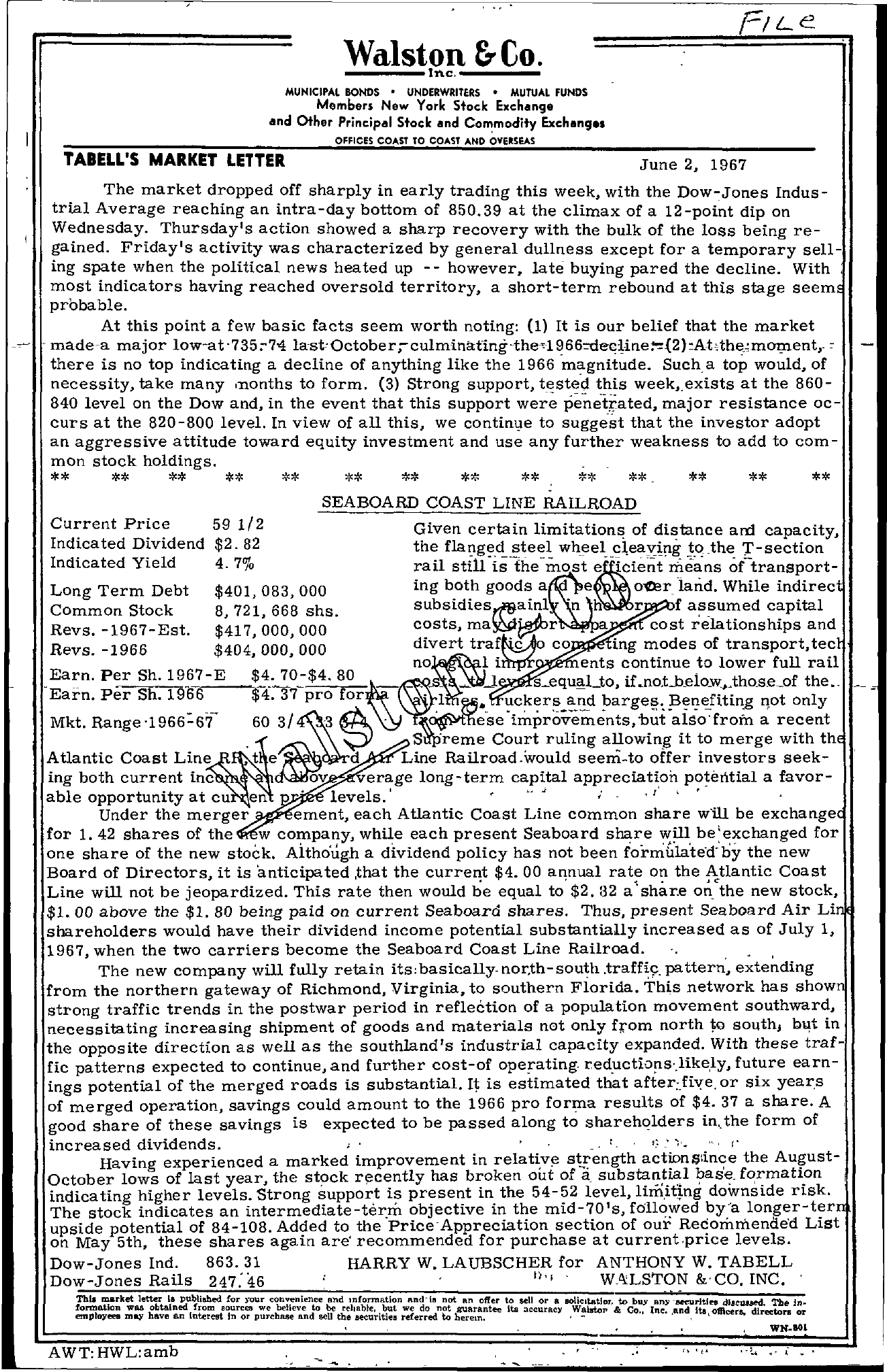 Walston &Co. —.;….Inc. -.;…….;….;;.. MUNICIPAL BONOS UNDERWRITERS MUTUAL FUNDS Members New York Stock Exchange and Other Principal Stock and Exchang TABELL'S MARKET LETTER OFFICES COAST TO COAST A.ND OVERSEAS June 2, 1967 The market dropped off sharply in early trading this week, with the Dow-Jones Indus- trial Average reaching an intra-day bottom of 850.39 at the climax of a 12-point dip on i Wednesday. Thursday's action showed a sharp recovery with the bulk of the loss being re- Friday's activity was characterized by general dullness except for a temporary sell- mg spate when the political news heated up – – however, late buying pared the decline. With . most indicators having reached oversold territory, a short-term rebound at this stage seem probable. At this pOint a few basic facts seem worth noting (1) It is our belief that the market made-a major low-at'735-N there is no top indicating a decline of anything like the 1966 -magnitude. Sucha top would, of necessity, take many ,nonths to form. (3) Strong support, teste-d this week,exists at the 860- 840 level on the Dow and, in the event that this support were penetrated, major resistance oc- curs at the 820-800 level. In view of all this, we continge to suggest that the investor adopt an aggressive attitude toward equity investment and use any further weakness to add to com- mon stock holdings. SEABOARD COAST LINE RAILROAD Current Price 59 1/2 Indicated Dividend 2.82 Gl' ven certain limitations of distance am capacity, the Jothe 'I'-section Indicated Yield 4.7 -ail sti11 is E'cient means ctransport- Long Term Debt Common Stock Revs. -1967-Est. Revs. -1966 401,083,000 8,721,668 shs. 417,000,000 404, 000, 000 mg b.ot.h Csts, dlvert e o'(er land. While indirec n II r f a,sumed capital cost relationships and co ing modes of transport,tec Earn. Per Sh. 1967-E E h 96 arn. Per S . 1 6 Mkt. Range'19666'f AUantic Coast Line 4.70-4. 80 4.37 60 pro ffVoAr . – iihPf.9 ents to lower full rail – – …l the. uckers and barges. Benefiting not only a recent SU'preme Court ruling allowing it to merge with th ,t e d Line Railroad.would seem-to offer investors seek- ing both current inc overage long-term capital appreciation a favor- able opportunity at cu en . levels.' , .. . 1 Under the merger ement, each Atlantic Coast Line common share w'ill be exchange for 1. 42 shares of the w company, while each present Seaboard share will be'exchanged for one share of the new stock. Aitho'ti.gh a dividend policy has not been forrriiilate'd-'by the new Board of Directors, it is anticipated .that the current 4.00 annual rate on the Atlantic Coast Line will not be jeopardized. This rate then would be equal to' 2. 32 a shar.e \he new stock, 1. 00 above the 1. 80 being paid on current Seaboard shares. Thus, present Seaboard Air Li shareholders would have their dividend income potential substantially increased as of July 1, 1967, when the two carriers become the Seaboard Coast Line Railroad. The new company will fully retain its nor.th-south .traffic; pa ttern, from the northern gateway of Richmond, Virginia, to southern Florida. This network has show strong traffic trends in the postwar period in reflection of a population movement southward, necessitating increasing shipment of goods and materials not only f,om north south) bllt in the opposite direction as well as the southland's industrial capacity expanded. With these traf- fic patterns expected to continue,and further cost-of operating- red.uctia!1s,like.ly, future earnings potential of the merged roads is substantial. It is estimated that after.five. or six year.s of merged operation, savings could amount to the 1966 pro forma results of 4. 37 a share. A good share of these savings increased dividends. is expected ,. to be passed along to sh. a,reh. otl,d-'e'r.s in.the form of Having experienced a marked improvement in relative strength actionlOince the August- aOctober lows of last year, the stock recently has broken out of indicating higher levels. Strong support is present in the 54-52 level, limiting downside risk. The stock indicates an intermediate-term objective in the mid-70's, fdllowed by'a longer-ter upside potential of 84-108. to the -Price-Appreciation section of our List on May 5th, these shares agam are' recommended for purchase at current.pnce levels. Dow-Jones Ind. 863.31 Dow-Jones Rails 24746 HARRY W. LAUBSCHEI)R., f-or ANTHONY W. TABELL WALS'rON &CO. INC.. This market le efomrpmloaytieoens mwaaya thoteabrvtaeIiIInaenpduibnflrtioesmhreesdt80tiOnuTrcoeyrsopuwUrFecchobBneJvlIiceenvaienendtcoeseblalentdhreemlisafeboclreum,riatbtiuieostnrweaefnedrdro'etedntnooot thgeaurnaerinao.nffteere tIots sell or a 3ccurac)' soWIicalltsattolIo'J'&toCbouy Inc ' … ,a n d , ita ' omdcieICreU lsdeldreeTt ohrea .!onr- WNlOl AWTHWLamb , …. .' i .