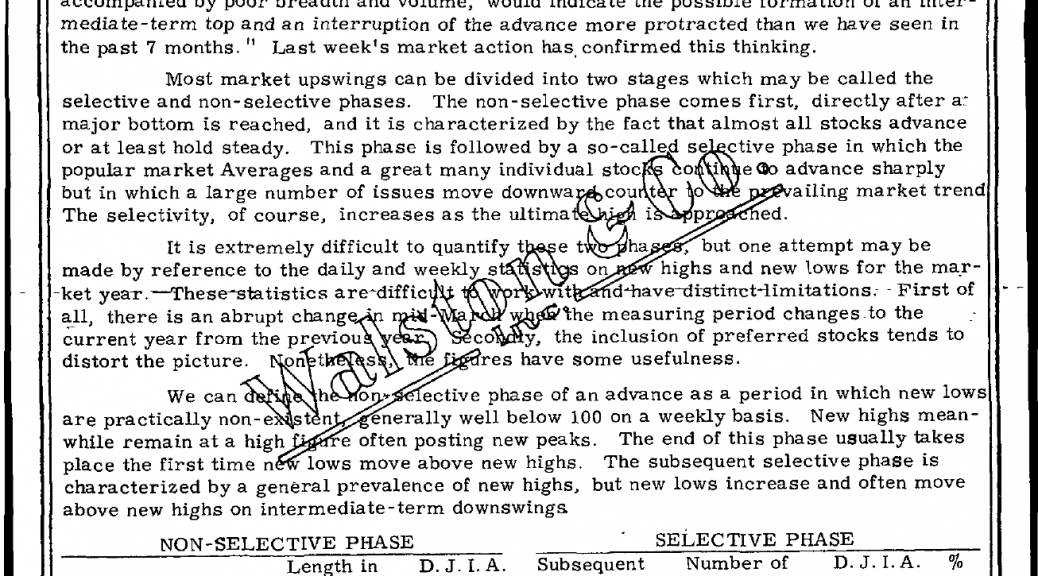 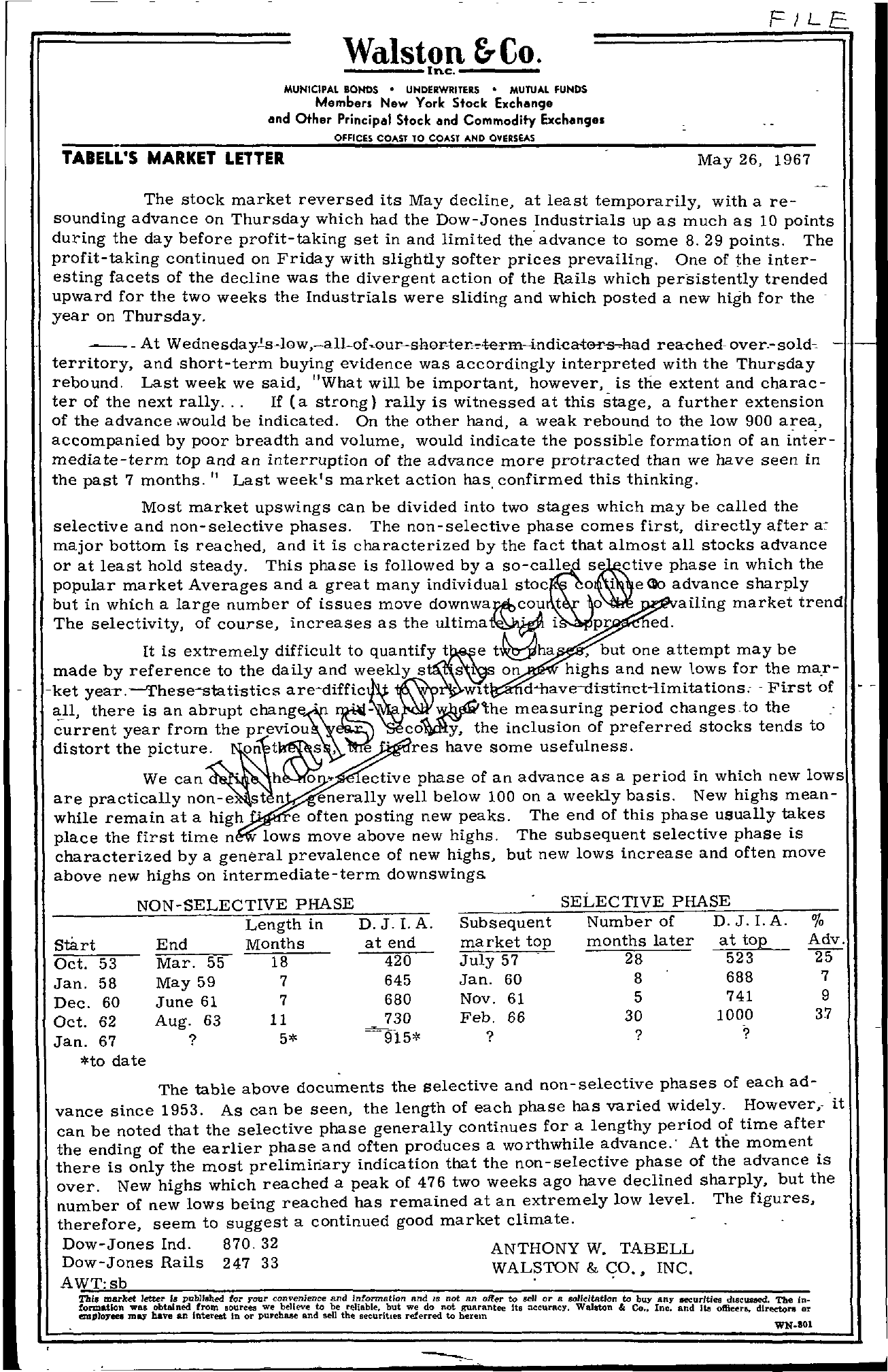 W—a-l-sItnocn.&— C–o-. MUNICIPAL BONOS UNDERWRITERS MUTUAL FUNDS Members New York Stock Exchange and Other Principal Stock and Commodity Exchanges TABEll'S MARKET lETTER OFFICES COAST TO COAST AND OVERSEAS F I L E. May 26, 1967 The stock market reversed its May decline, at least temporarily, with a resounding advance On Thursday which had the Dow-Jones Industrials up as much as 10 points during the day before profit-taking set in and limited the- advance to some 8.29 points. The profit-taking continued on Friday with slightly softer prices prevailing. One of the interesting facets of the decline was the divergent action of the Rails which persistently trended upward for the two weeks the Industrials were sliding and which posted a new high for the year on Thursday. – At rea-chedterritory, and short-term buying evidence was accordingly interpreted with the Thursday rebound. Last week we said, What will be important, however, is the extent and character of the next rally. .. If (a strong) rally is witnessed at this stage, a further extension of the advance .would be indicated. On the other hand, a weak rebound to the low 900 area, accompanied by poor breadth and volume, would indicate the possible formation of an i-ntermediate-term top and an interruption of the advance more protracted than we have seen in the past 7 months. Last week's market action has, confirmed this thinking. 1- Most market upswings can be divided into two stages which may be called the selective and non-selective phases. The non-selective phase comes first, directly after major bottom is reached, and it is characterized by the fact that almost all stocks advance or at least hold steady. This phase is followed by a slctive phase in which the popular market Averages and a great many individual stoc 0 i eo advance sharply but in which a large number of issues move t0 ailing market trend The selectivity, of course, increases as the i pr ed. It is extremely difficult to , but one attempt may be made by reference to the daily and weekly ss on highs and new lows for the mar- -ket year.-These–stati-stics W1t – First of all, there is an abrupt measuring period changesto the current year from the previou the inclusion of preferred stocks tends to distort the e' res have some usefulness. We can . ective phase of an advance as a period in which new lows are practically non-e t n enerally well below 100 on a weekly basis. New highs mean- while remain at a high' e often posting new peaks. The end of this phase usually takes place the first time move above new highs. The subsequent selective phase is characterized by a general prevalence of new highs, but new lows increase and often move above new highs on intermediate-term downswings. NON-SELECTIVE PHASE Length in D.J.LA. Start Oct. 53 End Months Mar. 55 18 at end 420 Jan. 58 Dec. 60 Oct. 62 May 59 June 61 Aug. 63 7 7 11 645 680 730 Jan. 67 5 915 to date SELECTIVE PHASE Subsequent Number of D.J.LA. market top months later at tOE July 57 28 523 Jan. 60 8 688 Nov. 61 5 741 Feb. 66 30 1000 Adv. 25 7 9 3-7 The table above documents the selective and non-selective phases of each ad- vance since 1953. As can be seen, the length of each phase has varied widely. However,- it can be noted that the selective phase generally continues for a lengthy period time after the ending of the earlier phase and often produces a worthwhile At the moment. there is only the most preliminary indication that the non-selecttve phase of the advance 1S over. New highs which reached a peak of 476 two weeks ago have declined but the number of new lows being reached has remained at an extremely low level. The flgures, therefore, seem to suggest a continued good market climate. Dow-Jones Ind. 870.32 ANTHONY W. TABELL Dow-Jones Rails 247 33 AWTsb WAL.STON & C. O., INC. Tfohrims amtiaornkewt alsettoebrta'liJnepdubflrJoahmedsotourrcyesouwr ecobnevlieenvieentcoe b.aendrfInIiBfabnlen. abtluotn wfetnddoIS nnoott gaunaraonRteere to it s sealcl cuorracl iy.s oWl i cai tlsattoi onn t & o buy Co., any Inc. asnecdurIitatieosffdic1e8rCaW, lsdeidr.ecTtbores inor emplOYee8 may have an interest In or pUFchlL8e Bnd sell the securities referred to herein