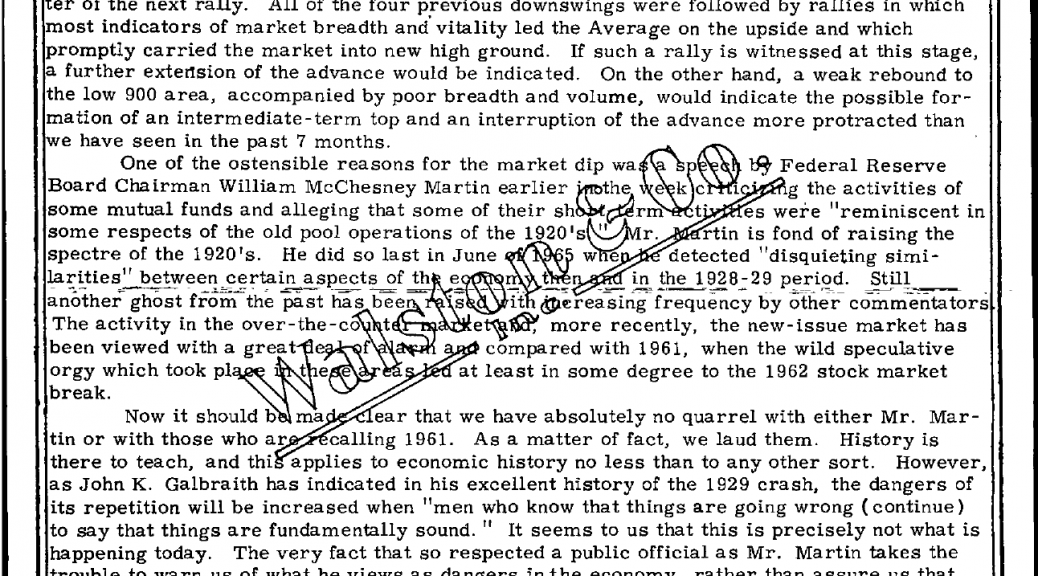 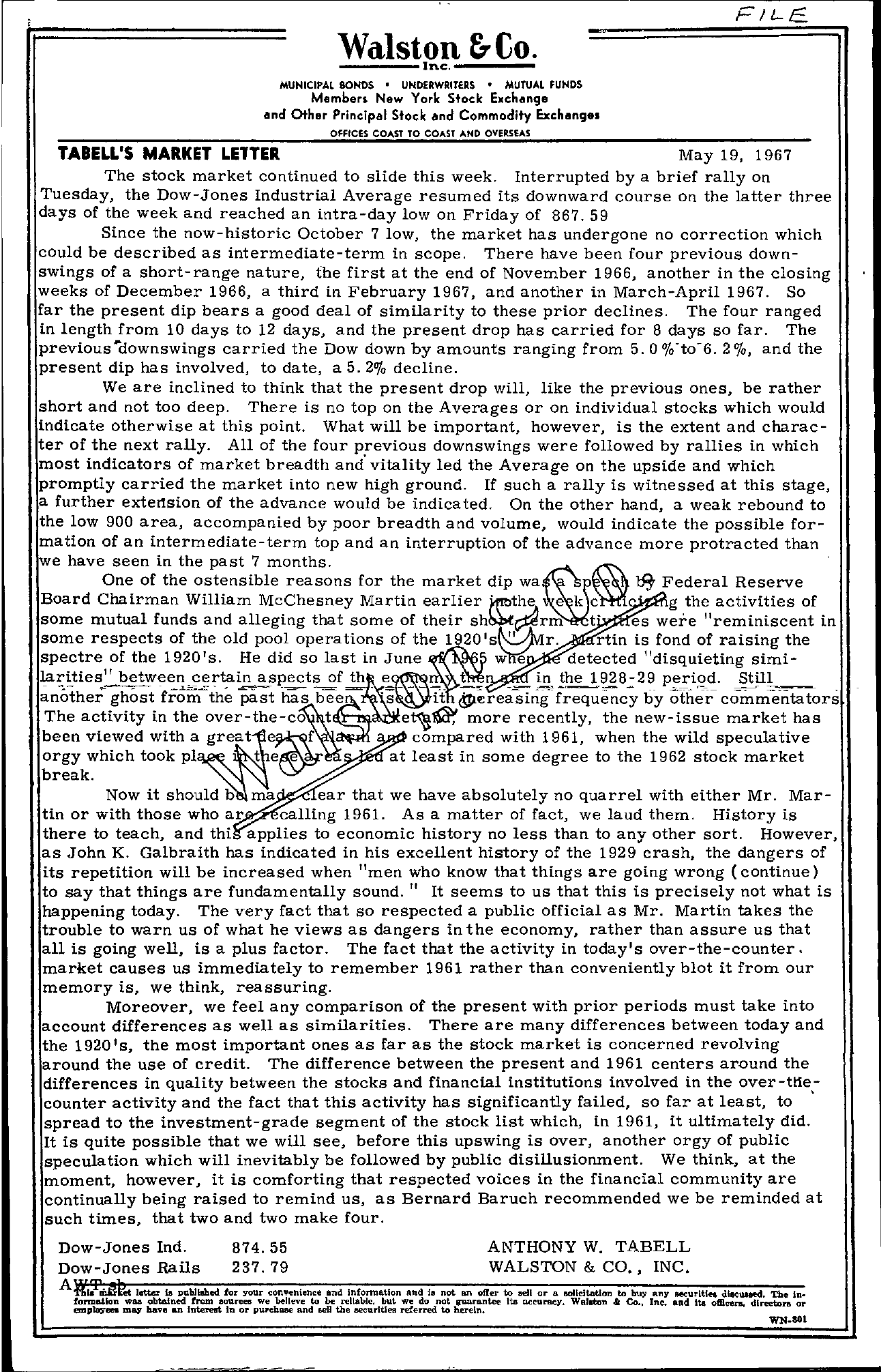 W- – -a-lIsntocn. -&– -C-o-. MUNICIPAL BONIlS UNDERWRITERS MUTUAL fUNDS Memba New York Stock Exchange and Other Principal Stock and Commodity Exchanges OfFICES COAST TO COAST AND OVERSEAS TABELL'S MARKET LETTER May 19, 1967 The stock market continued to slide this week. Interrupted by a brief rally on Tuesday, the Dow-Jones Industrial Average resumed its downward course on the latter three days of the week and reached an intra-day low on Friday of 867.59 Since the now-historic October 7 low, the market has undergone no correction which could be described as intermediate-term in scope. There have been four previous down- swings of a short-range nature, the first at the end of November 1966, another in the closing weeks of December 1966, a third in February 1967, and another in March-April 1967. So far the present dip bears a good deal of similarity to these prior declines. The four ranged in length from 10 days to 12 days, and the present drop has carried for 8 days so far. The carried the Dow down by amounts ranging from 5.0 to-6. 2 , and the present dip has involved, to date, a 5. 2 decline. We are inclined to think that the present drop will, like the previous ones, be rather short and not too deep. There is no top on the Averages or on individual stocks which would indicate otherwise at this point. What will be important, however, is the extent and character of the next rally. All of the four previous downswings were followed by rallies in which most indicators of market breadth and' vitality led the Average on the upside and which promptly carried the market into new high ground. If such a rally is witnessed at this stage, a further extel1sion of the advance would be indicated. On the other hand, a weak rebound to the low 900 area, accompanied by poor breadth and volume, would indicate the possible for- mation of an intermediate-term top and an interruption of the advance more protracted than we have seen in the past 7 months. One of the ostensible reasons for the market dip . 1lY Federal Reserve Board Chairman William McChesney Martin earlier nmthe e k g the activities of some mutual funds and alleging that some of their some respects of the old pool operations of the spectre of the 1920's. He did so last in June t' es were reminiscent in rtin is fond of raiSing the detected disquieting simi- larities between ghost c e r t a ipnaasst pheacst s of The activity in the t in the 1928-29 period. Still by commeritators more recently, the new-issue market has been viewed with a great orgy which took pI tee break. compared with 1961, when the wild speculative at least in some degree to the 1962 stock market Now it should b rna ear that we have absolutely no quarrel with either Mr. Mar- tin or with those who ar calling 1961. As a matter of fact, we laud them. History is there to teach, and thi applies to economic history no less than to any other sort. However, as John K. Galbraith has indicated in his excellent history of the 1929 crash, the dangers of its repetition will be increased when men who know that things are going wrong (continue) to say that things are fundamentally sound. It seems to us that this is precisely not what is happening today. The very fact that so respected a public official as Mr. Martin takes the trouble to warn us of what he views as dangers in the economy, rather than assure us that all is going well, is a plus factor. The fact that the activity in today's over-the-counter. market causes us immediately to remember 1961 rather than conveniently blot it from our memory is, we think, reassuring. Moreover, we feel any comparison of the present with prior periods must take into account differences as well as similarities. There are many differences between today and the 1920's, the most important ones as far as the stock market is concerned revolving around the use of credit. The difference between the present and 1961 centers around the differences in quality between the stocks and financial institutions involved in the over-Ute,- counter activity and the fact that this activity has significantly failed, so far at least, to spread to the investment-grade segment of the stock list which, in 1961, it ultimately did. It is quite possible that we will see, before this upswing is over, another orgy of public speculation which will inevitably be followed by public disillusionment. We think, at the moment, however, it is comforting that respected voices in the financial community are continually being raised to remind us, as Bernard Baruch recommended we be reminded at such times, that two and two make four. Dow-Jones Ind. 874.55 ANTHONY W. TABELL Dow-Jones Rails 237.79 WALSTON & CO., INC. A ',.nv.n'en,,–.n;;n;'.nn.Uo-n'.n-;'-'-,'n-an-….,.–7,.-.-.-.-,-o,–.–,-.-.'tat'o-n;'to-buy-.-ny-…,-u-,-.-U.–.d..'-…-.-..,…..'Th,….-,'-n. feomrpmloaytieoens mwlaQs' hoabvtaeinaend infrtoemrestsoIunrcoers PwUe1'ebheaslieevaendto&ebllethreelisaebcleu.ritbieust rweefedrroedntoot hgeuraerinan. tee ita accuracy, Walston & Co., Ine. and ita oflleera, dlreetol'll or WN.SOl