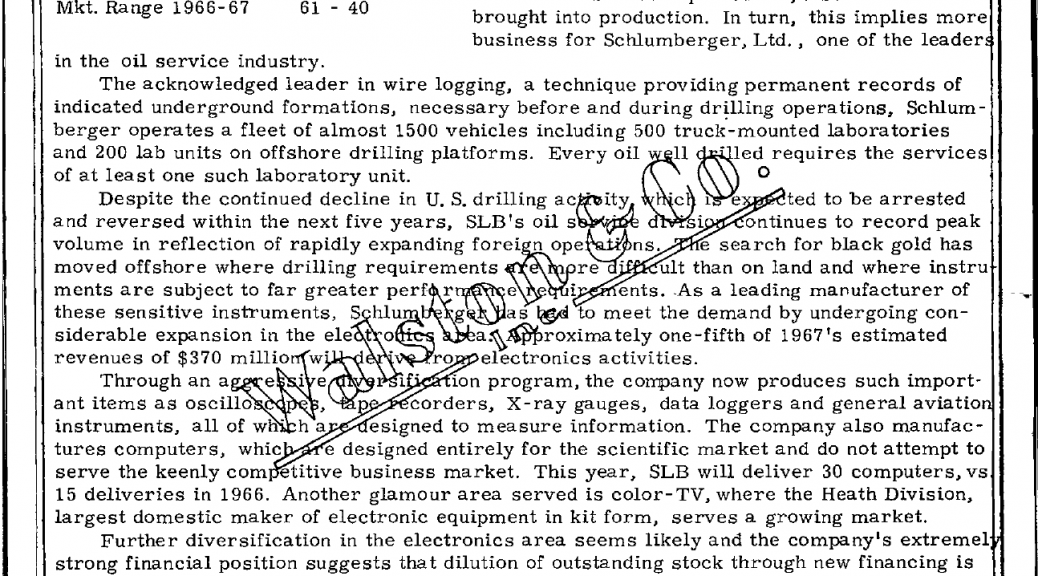 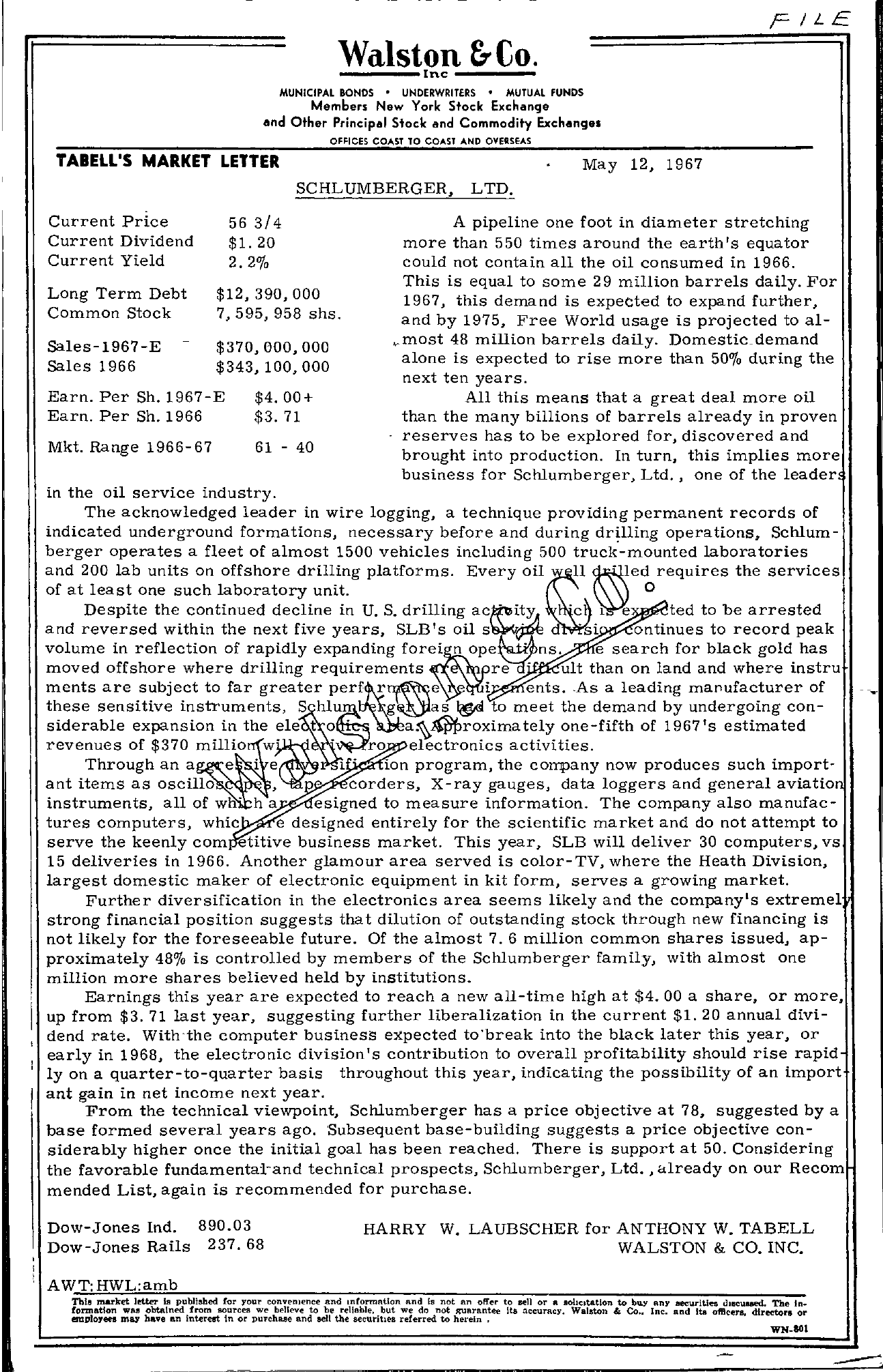 Walston &Co, —–Inc —– MUNICIPAL BONOS UNDERWRITERS MUTUAL FUNDS Members New York Stock Exchange and Other Principal Stock and Commodity Exchanges OFFICES COAST TO COAST AND OVERSEAS TABEll'S MARKET lETTER May 12, 1967 SCHLUMBERGER, LTD. F /L Current Price Current Dividend Current Yield 56 3/4 1. 20 2. 2 A pipeline one foot in diameter stretching more than 550 times around the earth's equator could not contain all the oil consumed in 1966. Long Term Debt 12,390,000 Common Stock 7,595,958 shs. This is equal to some 29 million barrels daily. For 1967, this demand is expected to expand further, and by 1975, Free World usage is prOjected to al- Sales-1967-E Sales 1966 370,000,000 343,100,000 48 million barrels daily. Domesticdemand alone is expected to rise more than 50 during the next ten years. Earn. Per Sh. 1967-E 4.00 All this means that a great deal more oil Earn. Per Sh. 1966 3.71 than the many billions of barrels already in proven Mkt. Range 1966-67 61 – 40 reserves has to be explored for, discovered and brought into production. In turn, this implies more business for Schlumberger, Ltd., one of the leader in the oil service industry. The acknowledged leader in wire logging, a technique providing permanent records of indicated underground formations, necessary before and during drilling operations, Schlum- berger operates a fleet of almost 1500 vehicles including 500 truck-mounted laboratories and 200 lab units on offshore drilling platforms. Every requires the services of at least one such laboratory unit. 0 Despite the continued decline in U. S. drilling and reversed within the next five years, SLB's oil 'c 1 e ted to be arrested 'si ontinues to record peak volume in reflection of rapidly expanding n e search for black gold has moved offshore where drilling requirements ult than on land and where instru ments are subject to far greater i ents. -As a leading manufacturer of these sensitive instruments, to meet the demand by undergoing con- siderable expansion in the ele to' tely one-fifth of 1967 's estimated revenues of 370 millio ro electronics activities. Through an a e i e l' ion program, the company now produces such import- ant items as oscillo , corders, X -ray gauges, data loggers and general aviatio h a esigned to measure information. The company also manufac- tures computers, whic e designed entirely for the scientific market and do not attempt to serve the keenly com etitive business market. This year, SLB will deliver 30 computers, vs 15 deliveries in 1966. Another glamour area served is color-TV, where the Heath Division, largest domestic maker of electronic equipment in kit form, serves a growing market. Further diversification in the electronics area seems likely and the company's extremel strong financial position suggests tha t dilution of outstanding stock through new financing is not likely for the foreseeable future. Of the almost 7. 6 million common shares issued, ap- proximately 48 is controlled by members of the Schlumberger family, with almost one million more shares believed held by institutions. Earnings this year are expected to reach a newall-time high at 4.00 a share, or more, up from 3.71 last year, suggesting further liberalization in the current 1. 20 annual divi- dend rate. With-the computer businesS expected to'break into the black later this year, or early in 1968, the electronic division's contribution to overall profitability should rise rapid lyon a quarter-to-quarter basis throughout this year, indicating the possibility of an import ant gain in net income next year. From the technical viewpoint, Schlumberger has a price objective at 78, suggested by a base formed several years ago. Subsequent base-building suggests a price objective con- siderably higher once the initial goal has been reached. There is support at 50. Considering the favorable fundamental-and technical prospects, Schlumberger, Ltd. ,Cllready on our Recom mended List, again is recommended for purchase. – — Dow-Jones Ind. 890.03 Dow-Jones Rails 237.68 HARRY W. LAUBSCHER for ANTHONY W. TAB ELL WALSTON & CO. INC. AWTHWLamb Thle market IMter Ie published f(lT your convemence and Information I\od Is not an offer to sell or a sohcltation to buy any securities JIICUa&ed. The In formation Watl obtained from BOurces we believe to be reliable. but we do not guarantee its accuracy, Walston & Co.. Inc. and Its ofBcers, diredon or elUplo7ees may have an Interest in or pUl'chasc and sell the securities referred to herein, WN.SOl