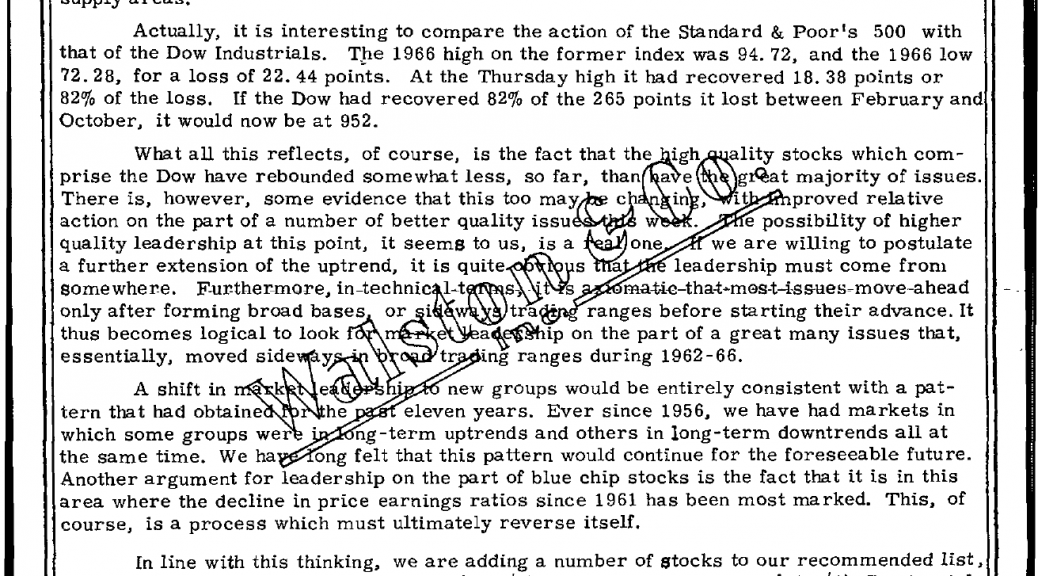 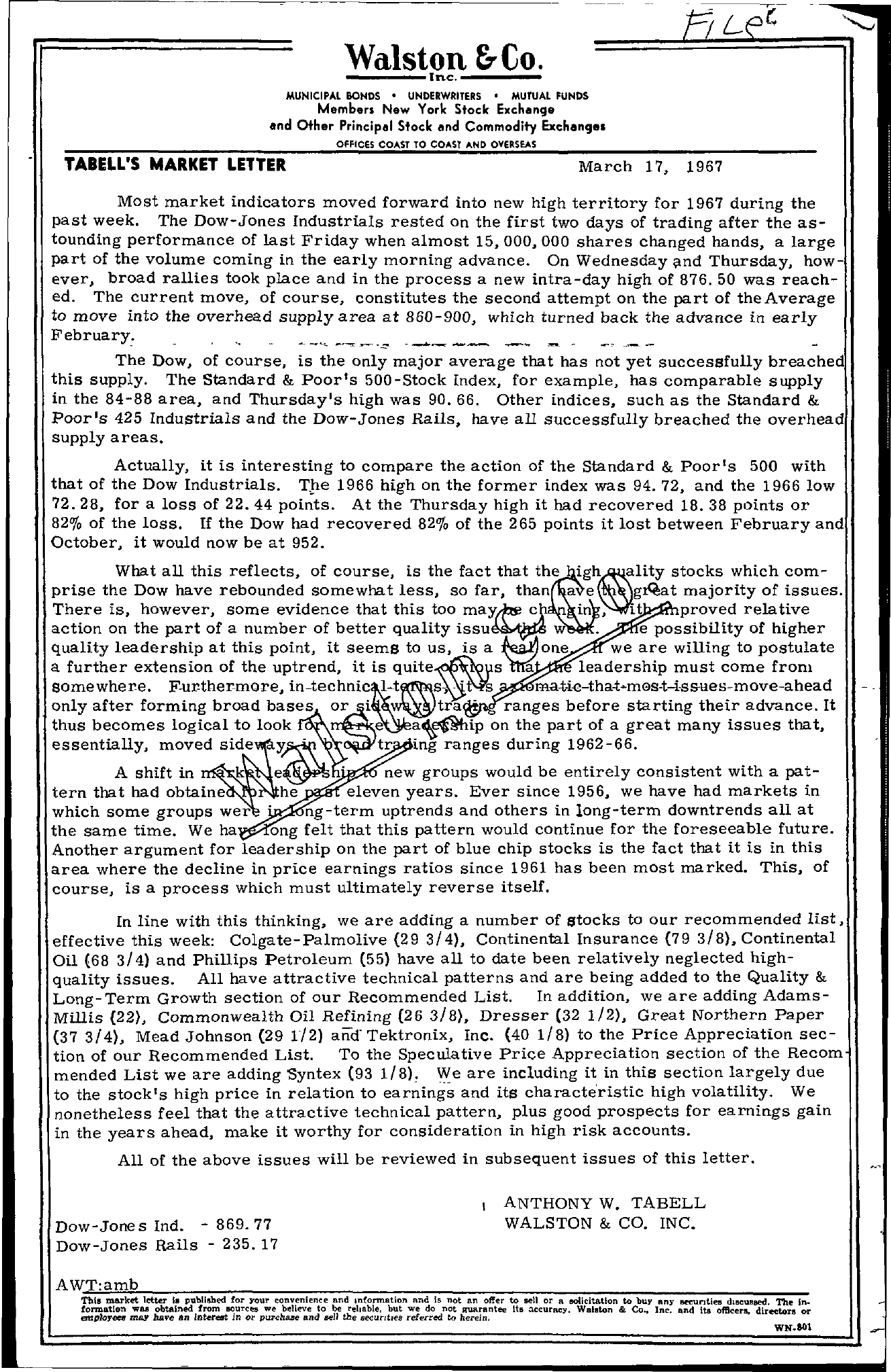 Walston &Co. lnc. MUNICIPAL &eNOS UNDERWRITERS MUTUAL FUNDS Members New York Stock Exchange and Other Principal Stock and Commodity Exchanges OFFices COAST TO COAST AND OVERSEAS TABELL'S MARKET LETTER March 17, 1967 Most market indicators moved forward into new high territory for 1967 during the past week. The Dow-JOnes Industrials rested on the first two days of trading after the as- tounding performance of last Friday when almost 15, ODD, 000 shares changed hands, a large part of the volume coming in the early morning advance. On Wednesday and Thursday, how- ever, broad rallies took place and in the process a new intra-day high of 876. 50 was reach- ed. The current move, of course, constitutes the second attempt on the part of the Average to move into the overhead supply area at 860-900, which turned back the advance in early F ebruary '.-' . . . The Dow, of course, is the only major average that has not yet successfully breached this supply. The Standard & Poor's 500-Stock Index, for example, has comparable supply in the 84-88 area, and Thursday's high was 90.66. Other indices, such as the Standard & Poor's 425 Industrials and the Dow-Jones Rails, have all successfully breached the overhead supply areas. Actually, it is interesting to compare the action of the Standard & Poor's 500 with that of the Dow Industrials. Tpe 1966 high on the former index was 94.72, and the 1966 low 72.28, for a loss of 22.44 points. At the Thursday high it had recovered 18.38 points or 82/0 of the loss. If the Dow had recovered 820/0 of the 265 points it lost between February and October, it would now be at 952. What all this reflects, of course, is the fact that the stocks which com- prise the Dow have rebounded somewhat less, so far, than a e majority of issues. There is, however, some evidence that this too may c in, it proved relative action on the part of a number of better quality issu w. e possibility of higher quality leadership at this point, it seems to us, is a a further extension of the uptrend, it is );t11 we are willing to postulate leadership must come from somewhere. F-ul'thel'more, – only after forming broad ranges before starting their advance. It thus becomes logical to look essentially, moved side 'Ii e on the part of a great many issues that, tr ing ranges during 1962-66. A shift in k new groups would be entirely consistent with a pat- tern that had obtaine he eleven years. Ever since 1956, we have had markets in which some groups wer ng-term uptrends and others in long-term downtrends all at the same time. We ha ong felt that this pattern would continue for the foreseeable future. Another argument for leadership on the part of blue chip stocks is the fact that it is in this area where the decline in price earnings ratios since 1961 has been most marked. This, of course, is a process which must ultimately reverse itself. In line with this thinking, we are adding a number of stocks to our recommended list, effective this week Colgate-PalmOlive (29 3/4), Continental Insurance (79 3/8), Continental Oil (68 3/4) and Phillips Petroleum (55) have all to date been relatively neglected high- quality issues. All have attractive technical patterns and are being added to the Quality & Long-Term Growth section of our Recommended List. In addition, we are adding Adams- Millis (22), Commonwealth Oil Refining (26 3/8), Dresser (32 1/2), Great Northern Paper (37 3/4), Mead Johnson (29 1/2) and- Tektronix, Inc. (40 1/8) to the Price Appreciation sec- tion of our Recommended List. To the Speculative Price Appreciation section of the Recom mended List we are adding Syntex (93 1/ 8), are including it in this section largely due to the stock's high price in relation to earnings and its characteristic high volatility. We nonetheless feel that the attractive technical pattern, plus good prospects for earnings gain in the years ahead, make it worthy for consideration in high risk accounts. All of the above issues will be reviewed in subsequent issues of this letter. Dow-Jone sInd. – 869.77 Dow-Jones Rails – 235.17 ANTHONY W. TABELL WALSTON & CO. INC. AWTamb This market letter Is published for your convenience and mformation Rnd Is not an offer to sell or R lIOI.ieitation to buy any aKtlrlties dl5eUllaed. The In formation emDIoTeeIJ W88 may obtained from 80urces we believe to be reliable, but bave 8n lnteralt 112 or pUl'chase and sell the securIties rweeferdroedntoot guarantee herein. Its accuracy. Wallton & Co., Ine. and its officers,. dlrectol'8 or —