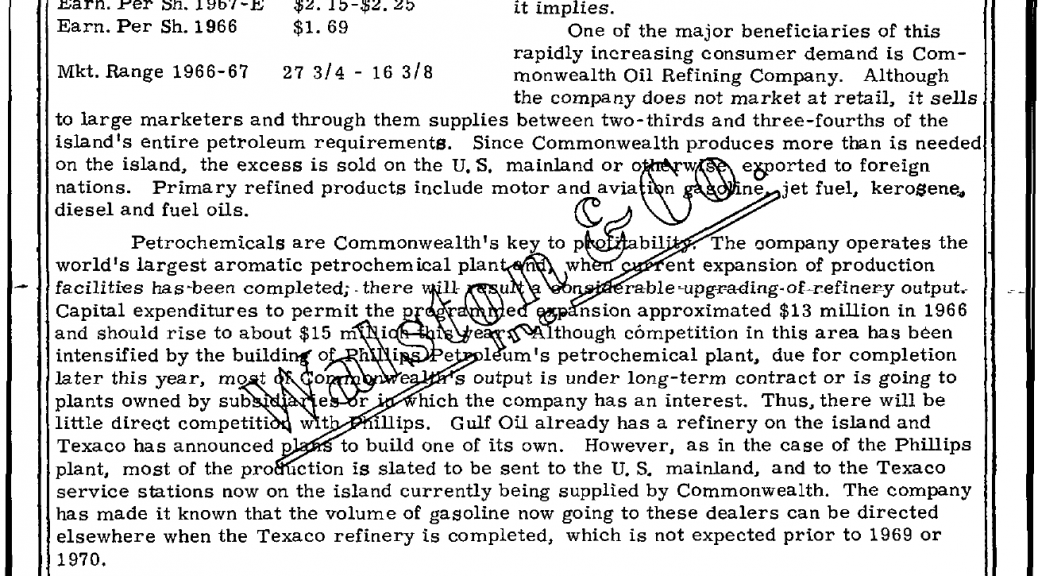 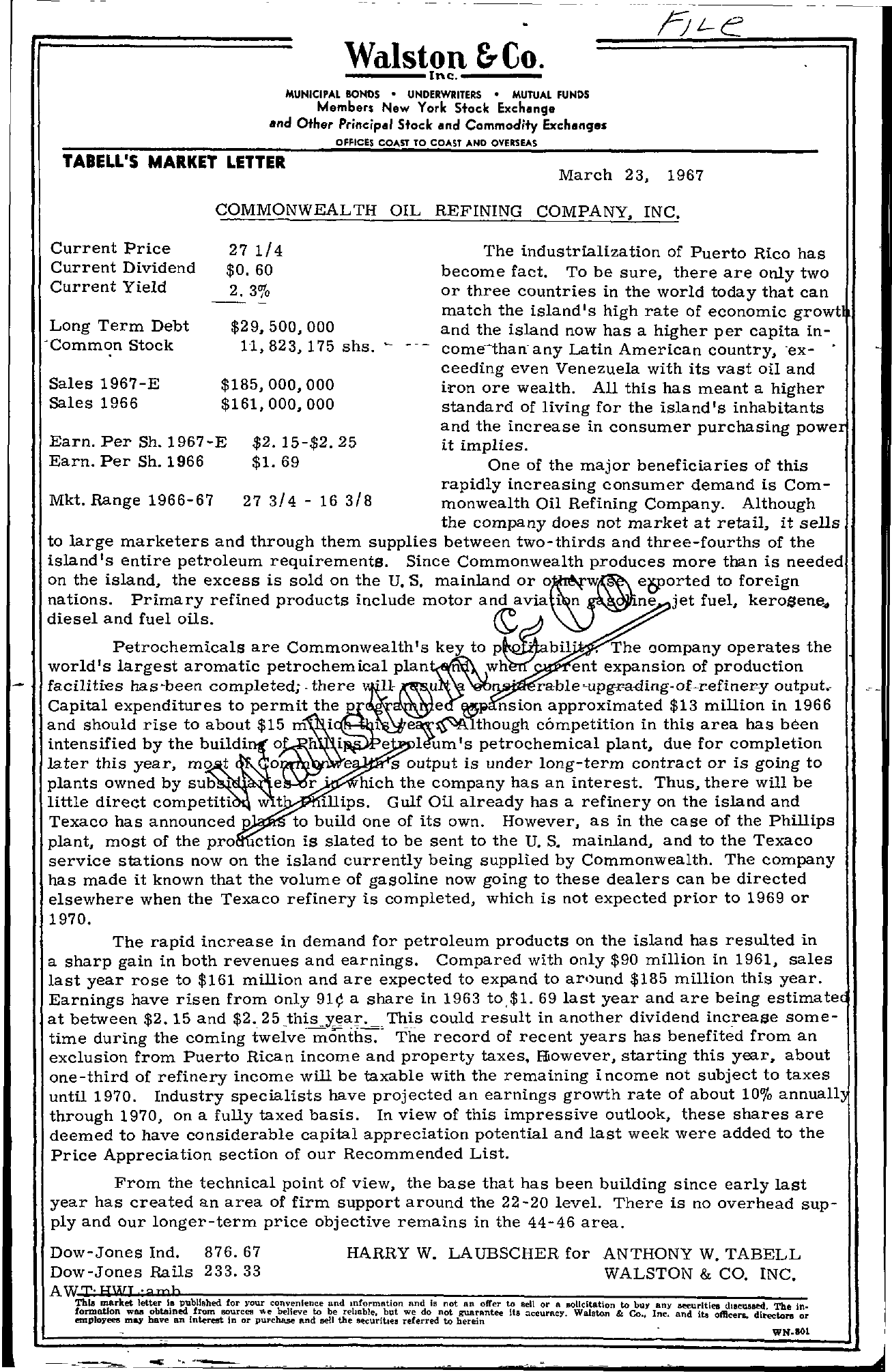 W—a-lIsntocn.-&–C-o-. MUNICIPAL BONOS UNDERWRITERS MUTUAL FUNDS Members New York Stock Exchange and Other Principal Stock and Commodify Exchange. TABELL'S MARKET LETTER OFFICES CO..,5T TO COA.ST AND OVERSEAS March 23, 1967 COMMONWEALTH OIL REFINING COMPANY, INC. Current Price Current Dividend Current Yield 27 1/4 0.60 2. 3 The industrialization of Puerto Rico has become fact. To be sure, there are only two or three countries in the world today that can Long Term Debt Common Stock match the island's high rate of economic growt 29,500,000 and the island now has a higher per capita in- 11,823, 175 shs. – – — comenhan any Latin American country, 'ex- . Sales 1967-E Sales 1966 185,000,000 161,000,000 ceeding even Venezuela with its vast oil and iron ore wealth. All this has meant a higher standard of living for the island's inhabitants Earn. Per Sh.1967-E 2.15-2.25 Earn. Per Sh.1966 1. 69 and the increase in consumer purchasing powe it implies. One of the major beneficiaries of this Mkt. Range 1966-67 273/4 – 163/8 rapidly increasing consumer demand is Commonwealth Oil Refining Company. Although the company does not market at retail, it sells to large marketers and through them supplies between two-thirds and three-fourths of the island's entire petroleum requirements. Since Commonwealth produces more than is needed on the island, the excess is sold on the U. S. mainland or to foreign nations. Primary refined products include motor and avia i n ne jet fuel, kerosene diesel and fuel oils. Petrochemicals are Commonwealth's key to p – bil' . The oompany operates the world's largest aromatic petrochemical ent expansion of production facilities has'been completed;, there . rablecupg-I'a-ding-of-refine!'Youtput. Capital expenditures to permit nsion approximated 13 million in 1966 and should rise to about i1 competition in this area has been intensified by the buildi 0 h i e leum's petrochemical plant, due for completion later this year, mo t o e s output is under long-term contract or is going to plants owned by sub e r – hich the company has an interest. Thus, there will be little direct competiti lllips. Gulf Oil already has a refinery on the island and Texaco has announced to build one of its own. However, as in the case of the Phillips plant, most of the pro ction is slated to be sent to the U. S. mainland, and to the Texaco service stations now on the island currently being supplied by Commonwealth. The company has made it known that the volume of gasoline now going to these dealers can be directed elsewhere when the Texaco refinery is completed, which is not expected prior to 1969 or 1970. The rapid increase in demand for petroleum products on the island has resulted in a sharp gain in both revenues and earnings. Compared with only 90 million in 1961, sales last year rose to 161 million and are expected to expand to around 185 million this year. Earnings have risen from only 91 a share in 1963 to,1. 69 last year and are being estimate at between 2.15 and 2.25 thisyear. This could result in another dividend increase some- time during the coming twelve' months.- The record of recent years has benefited from an exclusion from Puerto Rican income and property taxes, Iiloowever, starting this year, about one-third of refinery income will be taxable with the remaining income not subject to taxes until 1970. Industry specialists have projected an earnings growth rate of about 10 annuall through 1970, on a fully taxed basis. In view of this impressive outlook, these shares are deemed to have considerable capital appreciation potential and last week were added to the Price Appreciation section of our Recommended List. From the technical point of view, the base that has been building since early last year has created an area of firm support around the 22 -20 level. There is no overhead sup- ply and our longer-term price objective remains in the 44-46 area. Dow-Jones Ind. 876.67 HARRY W. LAUBSCHER for ANTHONY W. TABELL Dow-Jones Rails 233.33 WALSTON & CO. INC. AW.T'HHrT 'amb ThIB market letter Is publlhed for your coftv.enlenee and mfOrtnRUOn find is flot an offer to sell or a aollcitatlon to buy Ilny lM!eurltlea dlseuaaecl. The In- formation employees was May obtalnd from source!! 'e beheve to be reliable. but have an Interest In or pUl'chase and sell the 8(curltlel! rweeferdroedntoot guarantee herein its o.ccurney. Walston & Co., Inc. and its officers. directors or WN&ol – – –