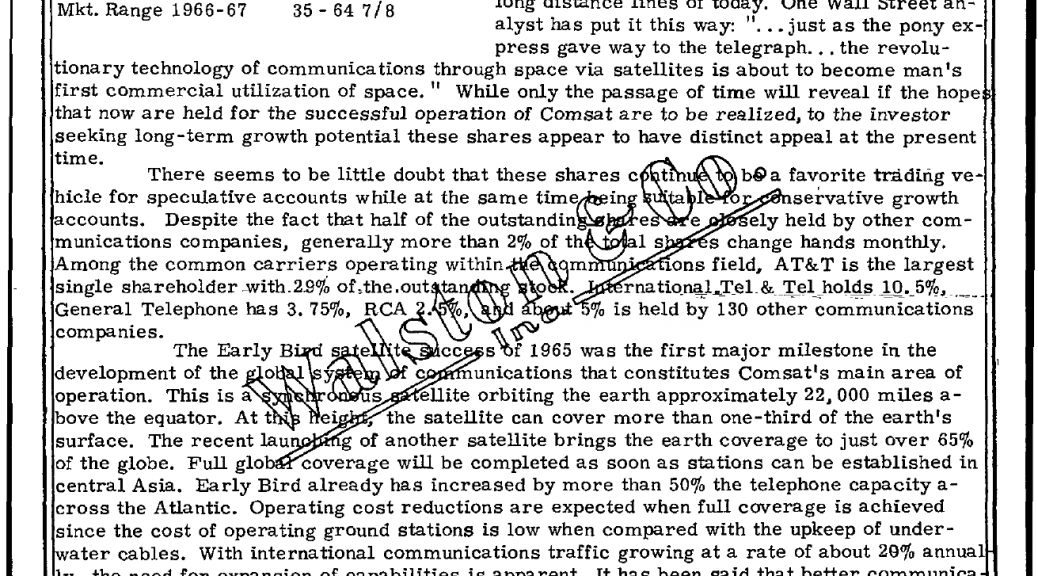 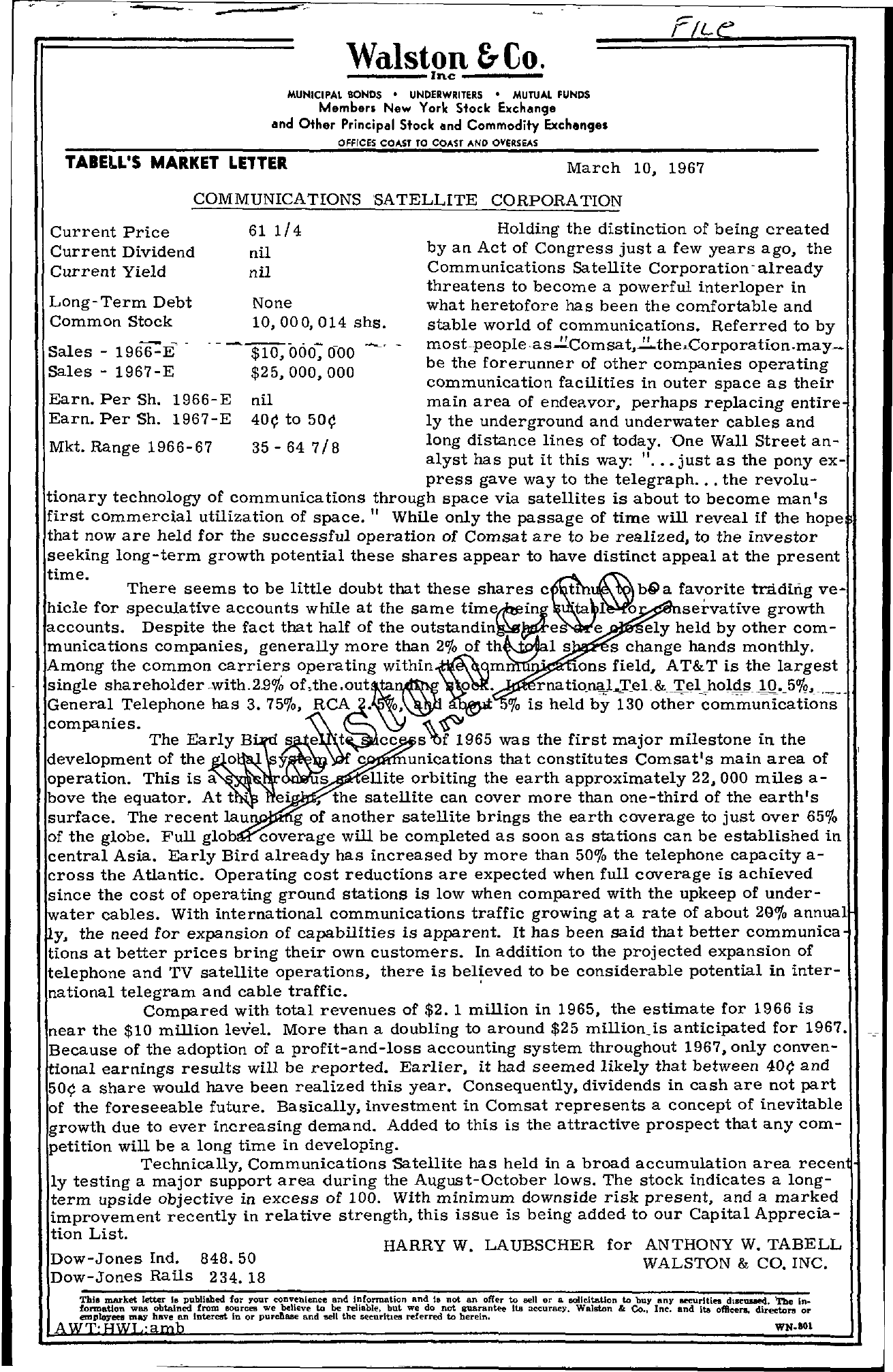 —— Walston &- Co, MUNICIPAL BONOS UNDERWRITERS MUTUAL FUNOS Members New York Stock Exchange and Other Principal Stock and Commodity Exchen9.' TABEll'S MARKET lETTER OFFICES COAST TO COAST AND OVERSEAS March 10, 1967 COM MUNICATIONS SATELLITE CORPORATION Current Price 61 1/4 Holding the distinction of being created Current Dividend Current Yield Long-Term Debt CommOn Stock nil nil None 10,000,014 shs. by an Act of Congress just a few years ago, the Communications Satellite Corporation-already threatens to become a powerful interloper in what heretofore has been the comfortable and stable world of communications. Referred to by Sales – 1966E- – . – – 10,000 000 Sales – 1967-E 25,000,000 be the forerunner of other companies operating communication facilities in outer space as their Earn. Per Sh. 1966-E nil main area of endeavor, perhaps replacing entire Earn. Per Sh. 1967-E 40 to 50 ly the underground and underwater cables and Mkt. Range 1966-67 35 – 64 7/8 long distance lines of today. One Wall Street analyst has put it this way … just as the pony ex- press gave way to the telegraph… the revolu- tionary technology of communications through space via satellites is about to become man's first commercial utilization of space. While only the passage of time will reveal if the hope that now are held for the successful operation of Comsat are to be realized, to the investor seeking long-term growth potential these shares appear to have distinct appeal at the present time. There seems to be little doubt that these shares b8la favorite trading hic1e for speculative accounts while at the same accounts. Despite the fact that half of the munications companies, generally more than 20/0 of servative growth e ely held by other coms s change hands monthly. Among the common carriers operating LOns field, AT&T is the largest single shareholder General Telephone has 3. 750/0, o. is held by 130 other communications companies. The B' cc s'tf 1965 was the first major milestone in the development of the 0 y. c unications that constitutes Comsat's main area of operation. This is a s ellite orbiting the earth approximately 22,000 miles a- bove the equator. At t ei ,the satellite can cover more than one-third of the earth's surface. The recent lau g of another satellite brings the earth coverage to just over 650/0 of the globe. Full glob coverage will be completed as soon as stations can be established in central Asia. Early Bird already has increased by more than 500/0 the telephone capacity a- cross the Atlantic. Operating cost reductions are expected when full coverage is achieved since the cost of operating ground stations is low when compared with the upkeep of under- ater cables. With international communications traffic growing at a rate of about 2Q annual y, the need for expansion of capabilities is apparent. It has been said that better communica tions at better prices bring their own customers. In addition to the projected expansion of telephone and TV satellite operations, there is believed to be considerable potential in inter- national telegram and cable traffic. ' Compared with total revenues of 2. 1 million in 1965, the estimate for 1966 is near the 10 million level. More than a doubling to around 25 million.is anticipated for 1967. Because of the adoption of a profit-and-loss accounting system throughout 1967, only conven- ional earnings results will be reported. Earlier, it had seemed likely that between 40 and 50 a share would have been realized this year. Consequently, dividends in cash are not part of the foreseeable future. Basically, investment in Comsat represents a concept of inevitable growth due to ever increasing demand. Added to this is the attractive prospect that any com- petition will be a long time in developing. Technically, Communications Satellite has held in a broad accumulation area recen ly testing a major support area during the August-October lows. The stock indicates a long- term upside objective in excess of 100. With minimum downside risk present, and a marked improvement recently in relative strength, this issue is being added to our Capital Apprecia- tion List. Dow-Jones Ind. 848.50 Dow-Jones Rails 234.18 HARRY W. LAUBSCHER for ANTHONY W. TABELL WALSTON & CO. INC. ThIB market letter 18 published for your eonvtnlence and Information And Is not an ofFer to sell or a solicitation to buy any securities dlscuaaed. The in- feomrDmloaytieoena mwaays hoabvtaeinaend Ifnrtoemrestsoiunrcoers pwUel'clblaealieevaendtoBbellethreeliSafb!lceu,rlbttoest rweeferdroedntoot hgeuraerina.ntee Ita Walston k Co., Inc. and Its offleera. directon or