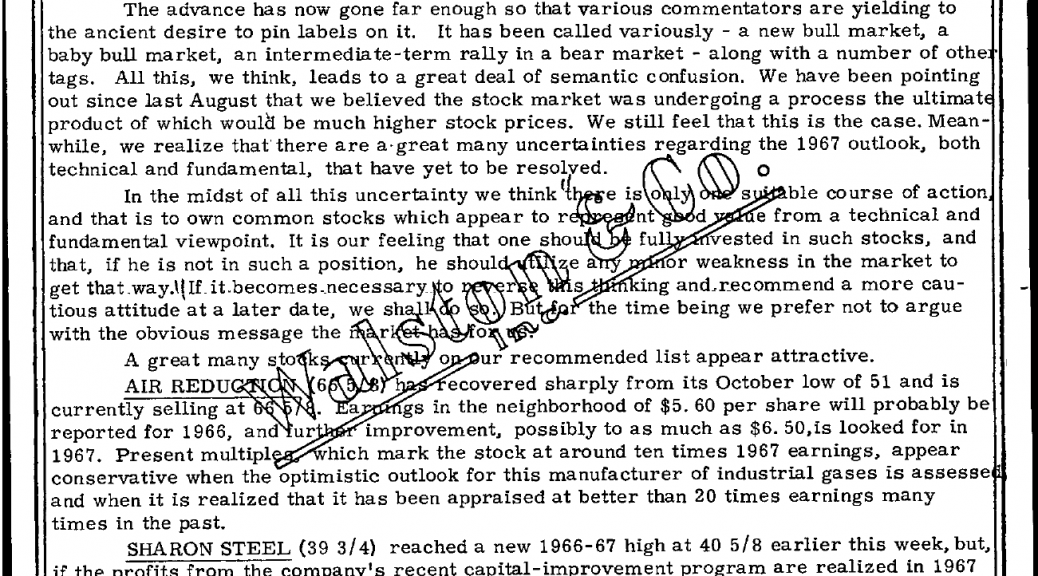 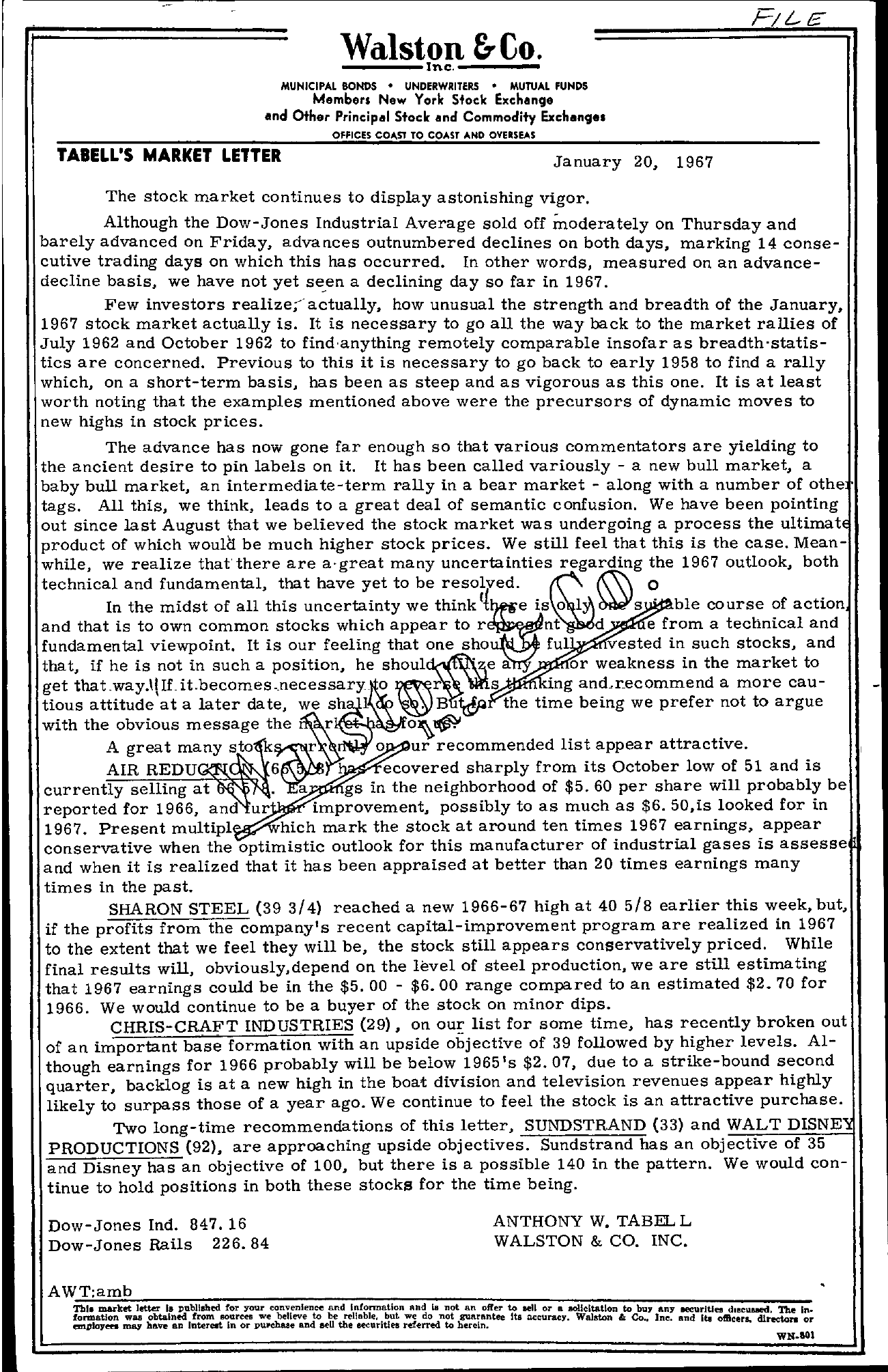 Walston &Co. Inc. MUNICIPAL BONOS UNDERWRITERS MUTUAL FUNDS Members New York Stock Exchange and Other Principal Stock and Commodify Exchen9.' TABELL'S MARKET LETTER OfFICES COA,ST TO COAST AND OVERSEAS January 20, 1967 The stock market continues to display astonishing vigor. Although the Dow-Jones Industrial Average sold off moderately on Thursday and barely advanced on Friday, advances outnumbered declines on both days, marking 14 consecutive trading days on which this has occurred. In other words, measured on an advancedecline basis, we have not yet seen a declining day so far in 1967. Few investors realize; actually, how unusual the strength and breadth of the January, 1967 stock market actually is. It is necessary to go all the way back to the market rallies of July 1962 and October 1962 to findanything remotely comparable insofar as breadth'statistics are concerned. Previous to this it is necessary to go back to early 1958 to find a rally which, on a short-term basis, has been as steep and as vigorous as this one. It is at least worth noting that the examples mentioned above were the precursors of dynamic moves to new highs in stock prices. The advance has now gone far enough so that various commentators are yielding to the ancient desire to pin labels on it. It has been called variously – a new bull market, a baby bull market, an intermediate-term rally in a bear market – along with a number of othe tags. All this, we think, leads to a great deal of semantic confusion. We have been pointing out since last August that we believed the stock market was undergoing a process the ultimat product of which woula be much higher stock prices. We still feel that this is the case. Meanwhile, we realize that' there are agreat many uncertainties regarding the 1967 outlook, both technical and fundamental, that have yet to be resolved. 0 the midst of all this we and that 1S to own common stocks whlCh appear to r 0I nt d ble course action e from a techmcal and fundamental viewpoint. It is our feeling that one sho fu vested in such stocks, and that, if he is not in such a position, he get thaLway.lIILit.becomes ..necessary. 0 .r a or weakness in the market to sing and,r.ecommend a more cau- tious attitude at a later date, we the time being we prefer not to argue with the obvious message the A great many sto 0 ur recommended list appear attractive. AIR REDU 6 ecovered sharply from its October low of 51 and is currently selling at reported for 1966, and . a gs in the neighborhood of 5.60 per share will probably be improvement, possibly to as much as 6. 50,is looked for in 1967. Present multipl hich mark the stock at around ten times 1967 earnings, appear conservative when the optimistic outlook for this manufacturer of industrial gases is assesse and when it is realized that it has been appraised at better than 20 times earnings many times in the past. SHARON STEEL (393/4) reached a new 1966-67 high at 405/8 earlier this week, but, if the profits from the company's recent capital-improvement program are realized in 1967 to the extent that we feel they will be, the stock still appears conservatively priced. While final results will, obviously,depend on the level of steel production, we are still estimating that 1967 earnings could be in the 5.00 – 6.00 range compared to an estimated 2.70 for 1966. We would continue to be a buyer of the stock on minor dips. CHRIS-CRAFT INDUSTRIES (29), on oUE list for some time, has recently broken out of an important base formation with an upside objective of 39 followed by higher levels. Al- though earnings for 1966 probably will be below 1965's 2.07, due to a strike-bound second quarter, backlog is at a new high in the boat division and television revenues appear highly likely to surpass those of a year ago. We continue to feel the stock is an attractive purchase. Two long-time recommendations of this letter, SUNDSTRAND (33) and WALT DISNE PRODUCTIONS (92), are approaching upside objectives. Sundstrand has an objective of 35 and Disney has an objective of 100, but there is a possible 140 in the pattern. We would con- tinue to hold positions in both these stocks for the time being. Dow-Jones Ind. 847. 16 Dow-Jones Rails 226.84 ANTHONY W. TABEL L WALSTON & CO. INC. AWTamb Thl. market letter I. published for your convenience and Infonnatlon Rnd la not an oft'er to &ell or a. AOIieit&t1on to buy any IleCUritie. The In formation emDioyee. was rn.ay obtained hll'Ve an l from BOurees ntere.t In or we pu.e hbaealieevaendto&eblle reliable. but the securities we do referre dntoot guarllntee herein. Ita accuracy. Walston Co Ine. and Ita ofBcers. dlr'ecton or WN.IOI