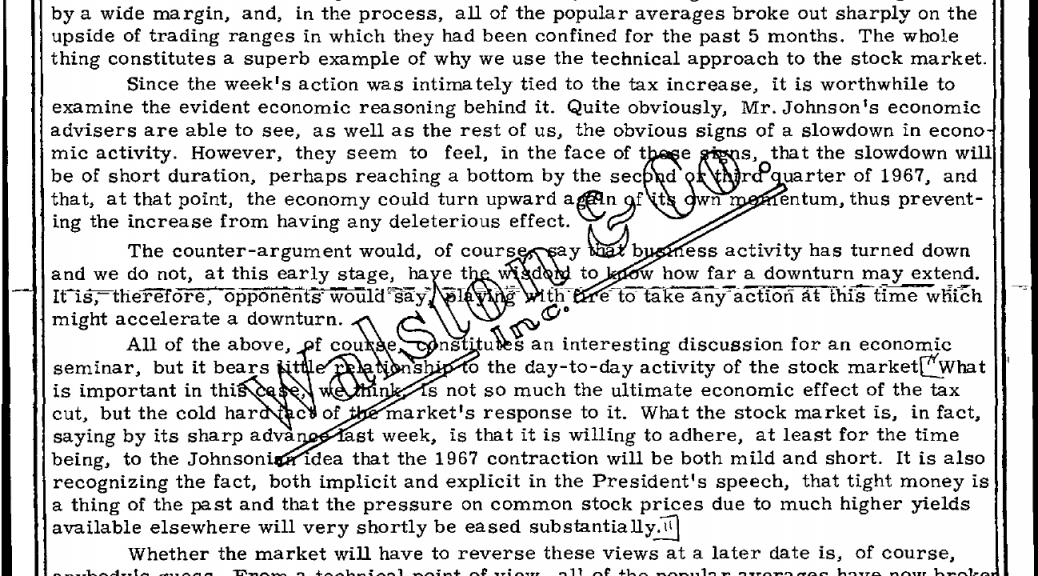 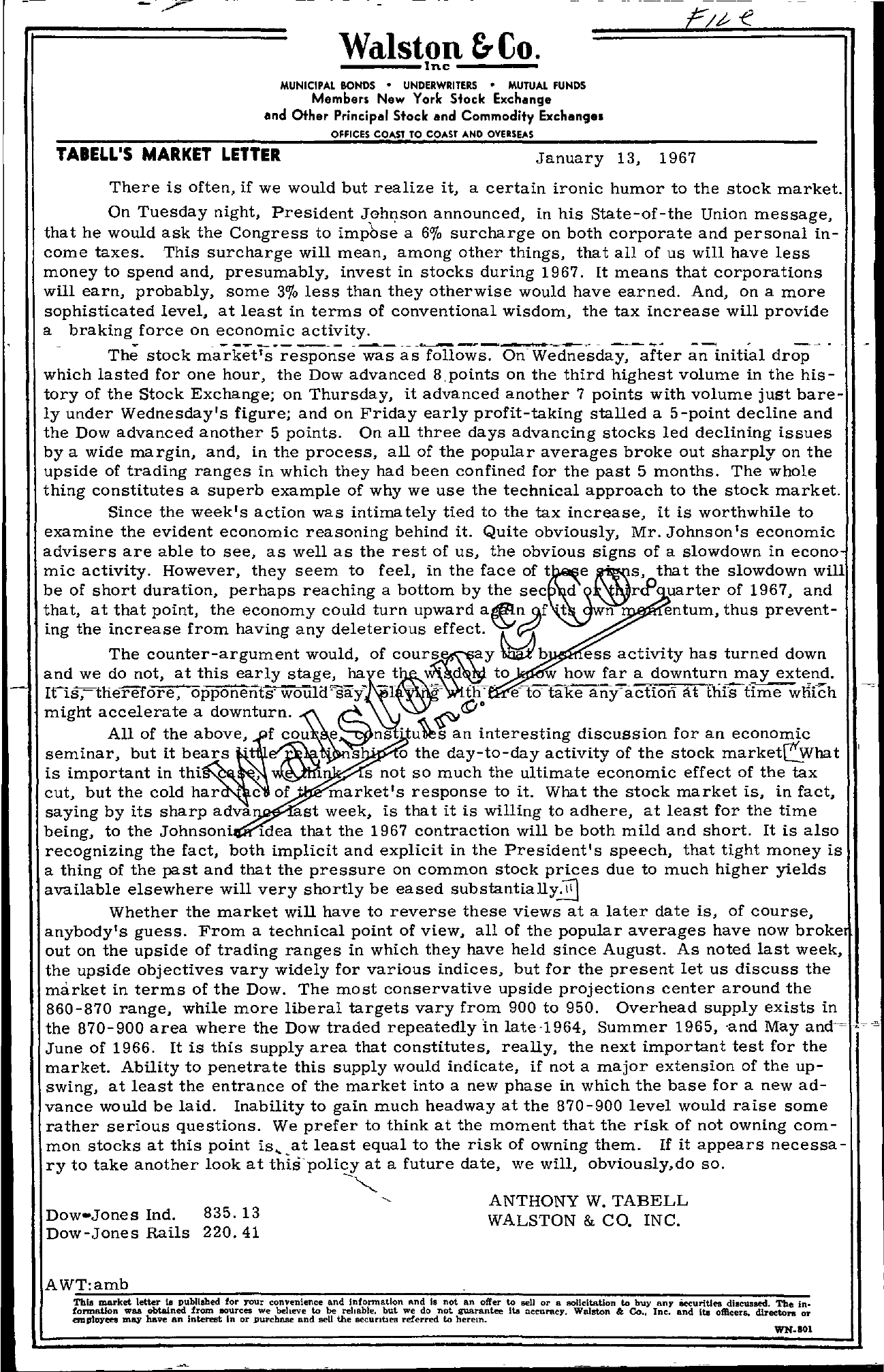 Walston &- Co. Inc …. MUNICIPAL BONDS UNDERWRITERS MUTUAL FUNDS Members New York Stock exchange and Other Principal Stock and Commodity Exchange. OFFICES COAST TO COAST AND OVERSEAS TABELL'S MARKET LETTER January 13, 1967 There is often, if we would but realize it, a certain ironic humor to the stock market. On Tuesday night, President J,ohl)son announced, in his State-of-the Union message, that he would ask the Congress to impose a 60/0 surcharge on both corporate and personal in- come taxes. This surcharge will mean, among other things, that all of us will have less money to spend and, presumably, invest in stocks during 1967. It means that corporations will earn, probably, some 30/0 less than they otherwise would have earned. And, on a more sophisticated level, at least in terms of conventional wisdom, the tax increase will provide a braking force on economic activity. stock asfcill;;;- On after an initial drop which lasted for one hour, the Dow advanced 8 points on the third highest volume in the his- tory of the Stock Exchange; on Thursday, it advanced another 7 pOints with volume just bare- ly under Wednesday's figure; and on Friday early profit-taking stalled a 5-point decline and the Dow advanced another 5 points. On all three days advancing stocks led declining issues by a wide margin, and, in the process, all of the popular averages broke out sharply on the upside of trading ranges in which they had been confined for the past 5 months. The whole thing constitutes a superb example of why we use the technical approach to the stock market. Since the week's action was intima tely tied to the tax increase, it is worthwhile to examine the evident economic reasoning behind it. Quite obviously, Mr. Johnson's economic advisers are able to see, as well as the rest of us, the obviOUS signs of a slowdown in econo mic activity. However, they seem to feel, in the face of that the slowdown will be of short duration, perhaps reaching a bottom by the sec d Wrd' uarter of 1967, and that, at that point, the economy could turn upward t ing the increase from having any deleterious effect. p. n entum, thus prevent- The counter-argument would, of coursay and we do not, at this early stage, d to ess activity has turned down how far a downturn may extend. e-to take anyaction at flifStfme wlifch All of the above, f cOU seminar, but it bears -t is important in thi , u\;s an interesting discussion for an economic s 0 the day-to-day activity of the stock s not so much the ultimate economic effect of the tax cut, but the cold har c of market's response to it. What the stock market is, in fact, saying by its sharp adva st week, is that it is willing to adhere, at least for the time being, to the Johnsoni ldea that the 1967 contraction will be both mild and short. It is also recognizing the fact, both implicit and explicit in the President's speech, that tight money is a thing of the past and that the pressure on common stock prices due to much higher yields available elsewhere will very shortly be eased substantiallyB Whether the market will have to reverse these views at a later date is, of course, anybody's guess. From a technical point of view, all of the popular averages have now broke out on the upside of trading ranges in which they have held since August. As noted last week, the upside objectives vary widely for various indices, but for the present let us discuss the market in terms of the Dow. The most conservative upside projections center around the 860-870 range, while more liberal targets vary from 900 to 950. Overhead supply exists in the 870-900 area where the Dow traded repeatedly in late-1964, Summer 1965, -and May -.- June of 1966. It is this supply area that constitutes, really, the next important test for the market. Ability to penetrate this supply would indicate, if not a major extension of the upswing, at least the entrance of the market into a new phase in which the base for a new ad- vance would be laid. Inability to gain much headway at the 870-900 level would raise some rather serious questions. We prefer to think at the moment that the risk of not owning common stocks at this point at least equal to the risk of owning them. If it appears necessa- -'-ry to take another look at this-policy at a future date, we will, obviously,do so. Dow-Jones Ind. 835.13 Dow-Jones Rails 220.41 ANTHONY W. TABELL WALSTON & CO. INC. AWTamb This market letter Is publlehed tor yoUr convenience and Information Rnd Is not an offer to sell or a soIldtation to buy any 8eeurittes diaeuaaed. The in efomrpmloaytieoens mwaays hoabvtaeinaend infrtoemrestBOInuToeres pwUFe cbbaesheevaendtosebllethreelisaebCleU.ribtiuest rweeferdroedntoot guarantee hereln. Ita accuracy. Walston Co., Ine. and its oflleera. directors or WNSOI