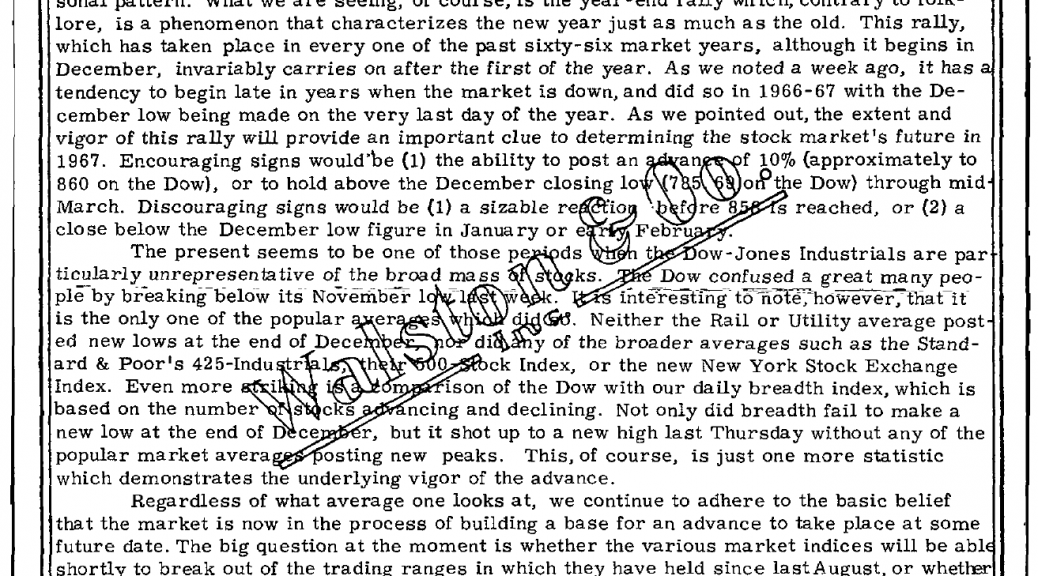 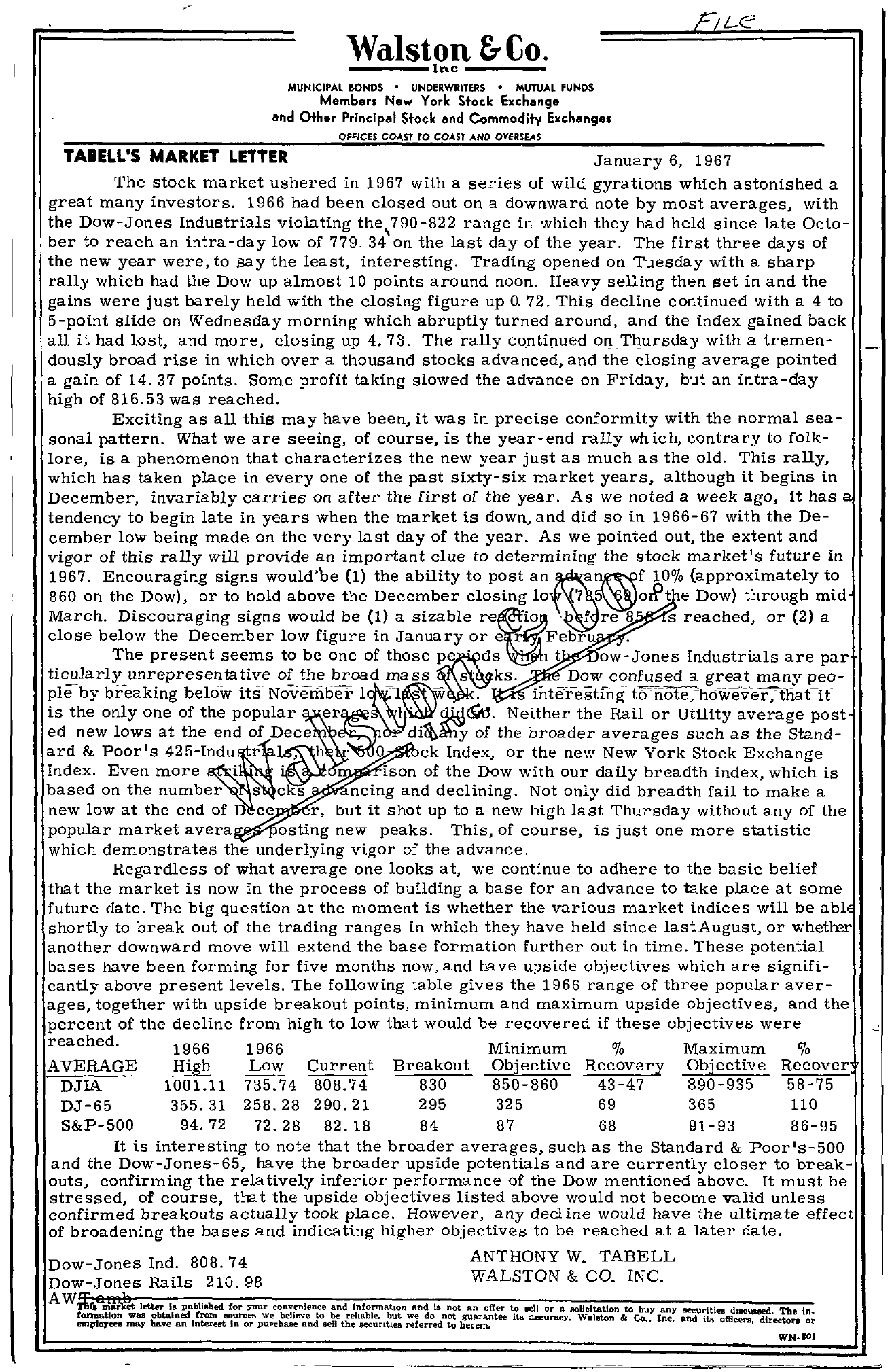 Walston &Co. MUNICIPAL BONDS UNDERWRITERS MUTUAL FUNDS Members New York Stock Exchange and Other Principal Stock and Commodity Exchange. TABELL'S MARKET LETTER OFFICES COAST TO COAST AND OVERSEAS January 6, 1967 The stock market ushered in 1967 with a series of wild gyrations which astonished a great many investors. 1966 had been closed out on a downward note by most averages, with the Dow-Jones Industrials violating the 790-822 range in which they had held since late Octo- ber to reach an intra-day low of 779. 34 on the last day of the year. The first three days of the new year were, to say the least, interesting. Trading opened on Tuesday with a sharp rally which had the Dow up almost 10 points around noon. Heavy selling then set in and the gains were just barely held with the closing figure up O. 72. This decline continued with a 4 to 5-point slide on Wednesday morning which abruptly turned around, and the index gained back all it had lost, and more, closing up 4.73. The rally continued on Thursday with a tremen- dously broad rise in which over a thousand stocks advanced, and the closing average pointed a gain of 14. 37 points. Some profit taking slowed the advance on Friday, but an intra-day high of 816.53 was reached. Exciting as all this may have been, it was in precise conformity with the normal sea- sonal pattern. What we are seeing, of course, is the year-end rally which, contrary to folk- lore, is a phenomenon that characterizes the new year just as much as the old. This rally, which has taken place in everyone of the past Sixty-six market years, although it begins in December, invariably carries on after the first of the year. As we noted a week ago, it has tendency to begin late in years when the market is down, and did so in 1966-67 with the De- cember low being made on the very last day of the year. As we pointed out, the extent and vigor of this rally will provide an important clue to determining the stock market's future in 1967. Encouraging signs would'be (1) the ability to post 10/0 (approximately to 860 on the Dow), or to hold above the December closing 10 7 Dow) through mid March. Discouraging signs would be (1) a sizable . f re 8 s reached, or (2) a close below the December low figure in January or e H9,\Febru . The present seems to be One of those . ds t ow-Jones Industrials are par broad s pIe by break1ng below 1ts November is the only one of the popular 11W ks.. great many mterestmg tO'note, however, that 1t Neither the Rail or Utility average post ed new lows at the end of Dece of the broader averages such as the Stand- ard & Poor's r 0 ck Index, or the new New York Stock Exchange Index. Even more i 1son of the Dow with our daily breadth index, which is based on the number s CKS ncing and declining. Not only did breadth fail to make a new low at the end of D ce r, but it shot up to a new high last Thursday without any of the popular market avera osting new peaks. This, of course, is just one more statistic which demonstrates the underlying vigor of the advance. Regardless of what average one looks at, we continue to adhere to the basic belief that the market is now in the process of building a base for an advance to take place at some future date. The big question at the moment is whether the various market indices will be abl shortly to break out of the trading ranges in which they have held since last August, or whetl another downward move will extend the base formation further out in time. These potential bases have been forming for five months now, and have upside objectives which are signifi- cantly above present levels. The following table gives the 1966 range of three popular aver- ages, together with upside breakout points, minimum and maximum upside objectives, and the percent of the decline from high to low that would be recovered if these objectives were reached. 1966 1966 Minimum /0 Maximum /0 AVERAGE High Low Current Breakout Objective Recovery Objective Recover DJIA 1001.11 735.74 808.74 830 850-860 43-47 890-935 58-75 DJ-65 355.31 258.28 290.21 295 325 69 365 110 S&P-500 94.72 72.28 82.18 84 87 68 91-93 86-95 It is interesting to note that the broader averages, such as the Standard & Poor's-500 and the Dow-Jones-65, have the broader upside potentials and are currently closer to breakouts, confirming the relatively inferior performance of the Dow mentioned above. It must be stressed, of course, that the upside objectives listed above would not become valid unless confirmed breakouts actually took place. However, any decline would have the ultimate effect of broadening the bases and indicating higher objectives to be reached at a later date. Dow-Jones Ind. 808.74 Dow-Jones Rails 210.98 ANTHONY W. TAB ELL WALSTON & CO. INC. AW,rer. mar ii!t letter Is publlsbed for your convenience and infonnatlon Rnd Is not An offer to sell or a 8Olieltatlon to buy any M!'cUrltiea dlltc\lSlled The In feomrpmloatyieoen. mwaays hoabvtaeinaend InfrtoeMrestsoIunrcoers PwUleebheaalieevaendtoseblle threehsaebcleu.rltbluest rweefedrroedntoot hgeuraerman. tee ita accuracy. Walston & Co Inc. and ita ofll.eers I dir' e l to l n or