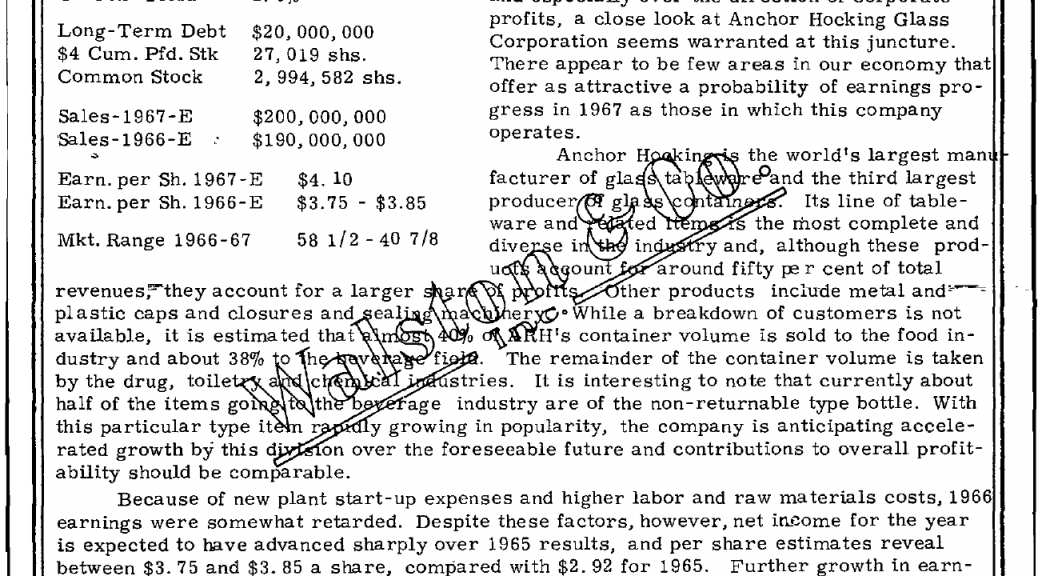 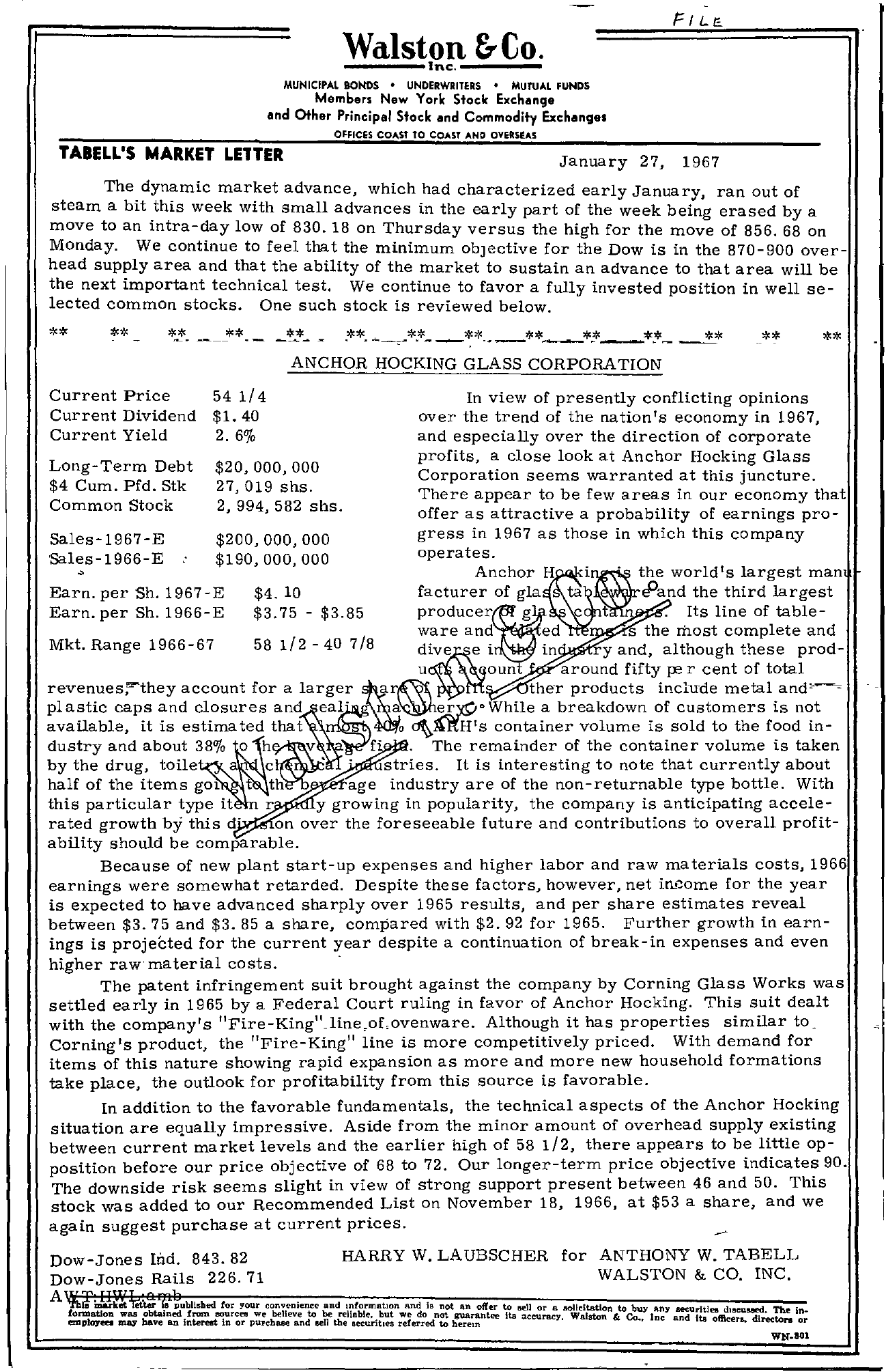 Walston &- Co. …;…..;.;;.;;;..;…;; I nco F I LIE.. MUNICIPAL BONDS UNDERWRITERS MUTUAL FUNDS Members New York Stock Exchange and Other Principal Stock and Commodity Exchangss TABELL'S MARKET LETTER OFfiCES COA.ST TO COAST AND OYERSt.AS January 27, 1967 The. advance, which had characterized early January, ran out of steam a bit .thiS week with small advances in the early part of the week being erased by a move to an mtra-day low of 830. 18 on Thursday versus the high for the move of 856. 68 on Monday. We continue to feel that the minimum obJective for the Dow is in the 870-900 over- head supply area and that the ability of the market to sustain an advance to that area will be the next important technical test. We continue to favor a fully invested position in well se- lected common stocks. One such stock is reviewed below. . —–.– ——— – . -.—- … ANCHOR HOCKING GLASS CORPORATION Current Price 54 1/4 In view of presently conflicting opinions Current Dividend 1. 40 over the trend of the nation's economy in 1967, Current Yield 2.6 and especially over the direction of corporate Long-Term Debt 4 Cum. Pfd. Stk Common Stock 20,000,000 27,019 shs. 2, 994, 582 shs. profits, a close look at Anchor Hocking Glass Corporation seems warranted at this juncture. There appear to be few areas in our economy that offer as attractive a probability of earnings pro- Sales-1967-E Sales-1966-E 200,000,000 190,000,000 Earn. per Sh. 1967 – E 4. 10 gress in 1967 as those in which this company operates. Anchor facturer of gla ta the world's largest man J'and the third largest Earn. per Sh. 1966-E 3.75 – 3.85 producerw; t . Its line of table- Mkt. Range 1966-67 581/2 – 40 7/8 ware and ei ed s the most complete and in yand, although these prod- u ount around fifty pc r cent of total revenues;'they account for a larger . ther products include metal plastic caps and closures a breakdown of customers is not available, it is estimated that 0 container volume is sold to the food in- dustry and 3 0 by the drug, toile c The remainder of the container volume is taken ' . stries. It is interesting to note that currently about half of the items gOl t th age industry are of the non-returnable type bottle. With this particular type it r y growing in popularity, the company is anticipating accele- rated growth by this d on over the foreseeable future and contributions to overall profit- ability should be comparable. Because of new plant start-up expenses and higher labor and raw ma terials costs, 1966 earnings were somewhat retarded. Despite these factors, however, net for the year is expected to have advanced sharply over 1965 results, and per share estimates reveal between 3.75 and 3.85 a share, compared with 2.92 for 1965. Further growth in earn- ings is projeCted for the current year despite a continuation of break-in expenses and even higher raw' material costs. The patent infringement suit brought against the company by Corning Glass Works was settled early in 1965 by a Federal Court ruling in favor of Anchor Hocking. This suit dealt with the company's Fire-King-line.oLovenware. Although it has properties similar to. Corning's product, the Fire-King line is more competitively priced. With demand for items of this nature showing rapid expansion as more and more new household formations take place, the outlook for profitability from this source is favorable. In addition to the favorable fundamentals, the technical aspects of the Anchor Hocking situation are equally impressive. Aside from the minor amount of overhead supply existing between current market levels and the earlier high of 58 1/2, there appears to be little op- position before our price objective of 68 to 72. Our longer-term price objective indicates 90. The downside risk seems slight in view of strong support present between 46 and 50. This stock was added to our Recommended List on November 18, 1966, at 53 a share, and we again suggest purchase at current prices. Dow-Jones Ind. 843.82 HARRY W. LAUBSCHER for ANTHONY W. TABELL Dow-Jones Rails 226.71 WALSTON CO. INC.& w-w. \!ttaeWeA tb ; market published tor your convenience and mformatlon And i8 not an oft'er to or a solicitation to buy any seeurltl d seed The .n-feomrpmloaytieoen. was ma;y boabvtaeinaend Ifnrtoemrestsoiunrcoers pwUeFchbaeslieevaendtoseblle threelisaebcleu.ritbiuest rweeferdroedntoot hgeuraerlnantee its aeeuracy. Walston & Co Inc and I eOau.tlClIeenu. d.re' ctora or WN.aol