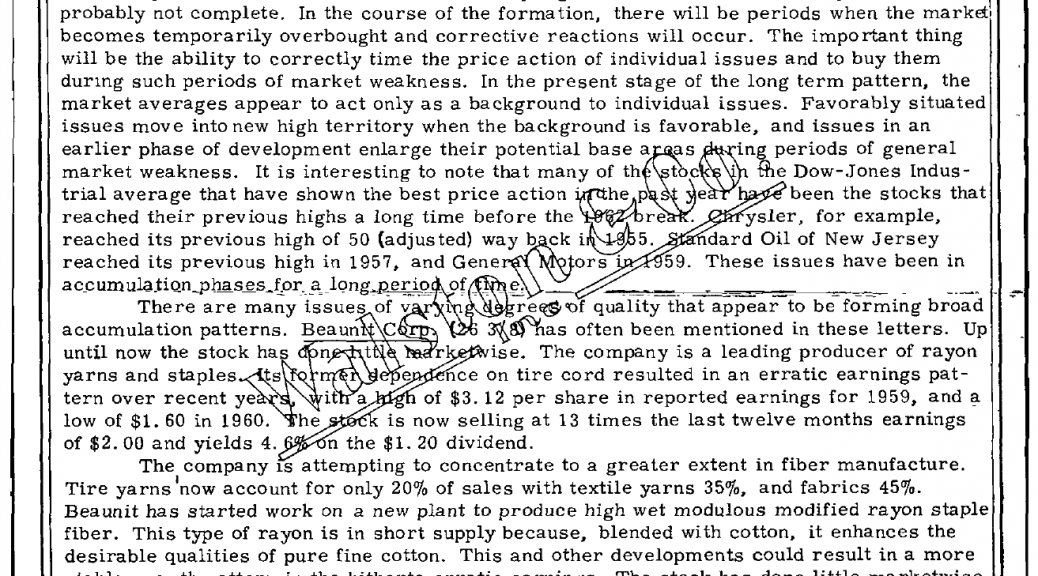 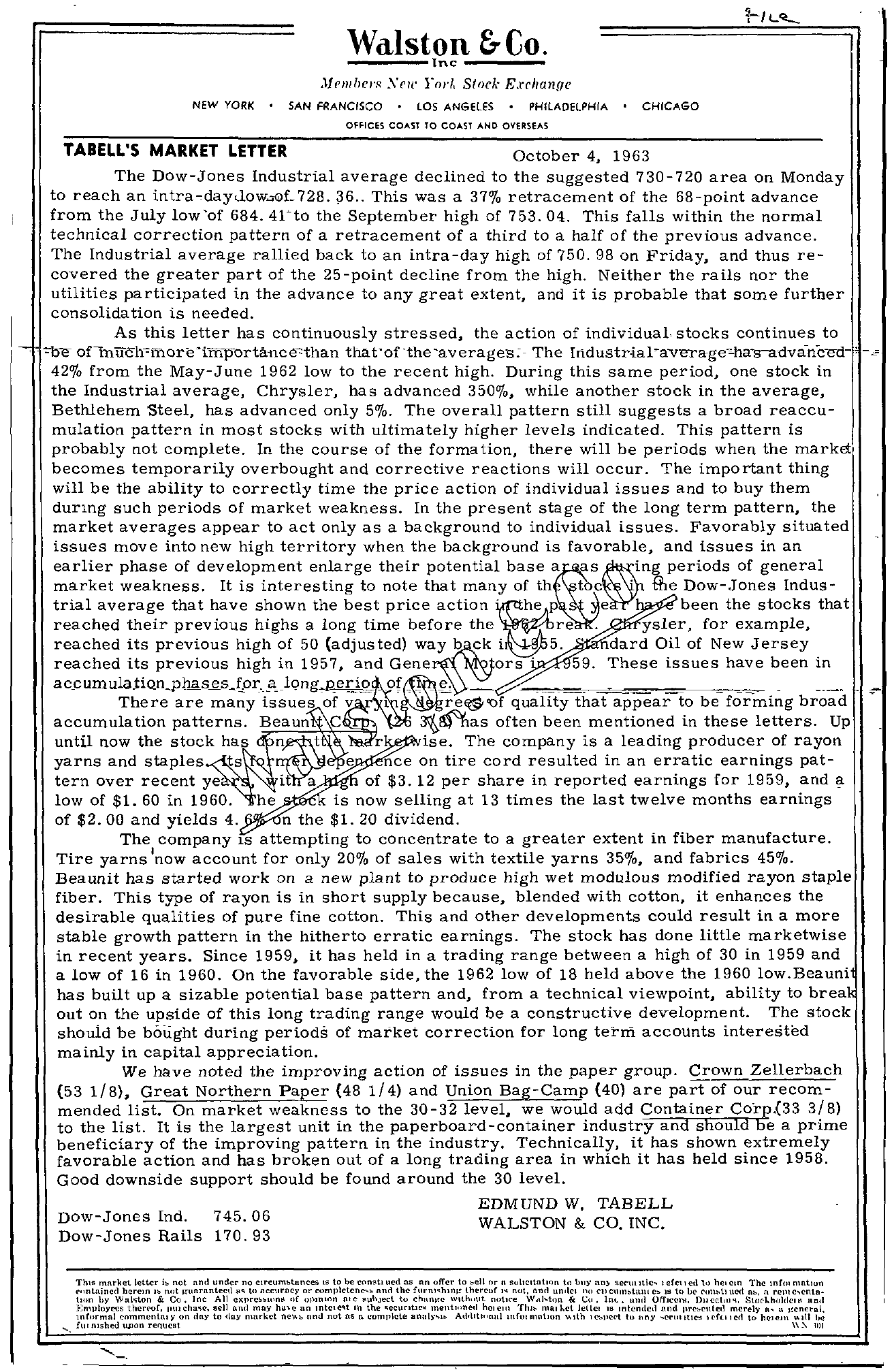 W—-a–l-s-tloncn–&—-C–o-. Jfrlllhel's Srll' rod, Stock E.rchange NEW YORK SAN FRANCISCO LOS ANGELES PHILADELPHIA CHICAGO OffiCES COAST TO COAST AND OVER.SEAS TABELL'S MARKET LETTER October 4, 1963 The Dow-Jones Industrial average declined to the suggested 730-720 area on Monday to reach an 728. ;36 .. This was a 37 retracement of the 68-point advance from the July low'of 684. 41to the September high of 753.04. This falls within the normal technical correction pattern of a retracement of a third to a half of the previous advance. The Industrial average rallied back to an intra-day high of 750.98 on Friday, and thus re- covered the greater part of the 25 -point decline from the high. Neither the rails nor the utilities participated in the advance to any great extent, and it is probable that some further consolidation is needed. As this letter has continuously stressed, the action of individual. stocks continues to .' m ofmuClFiYlOre'importancethan that'of 'the'averages- The Industrial-av-era-ge-ha13-adva'nc-ed– 42 from the May-June 1962 low to the recent high. During this same period, one stock in the Industrial average, Chrysler, has advanced 350, while another stock in the average, Bethlehem Steel, has advanced only 5. The overall pattern still suggests a broad reaccu- mulation pattern in most stocks with ultimately higher levels indicated. This pattern is probably not complete. In the course of the forma tion, there will be periods when the market, becomes temporarily overbought and corrective reactions will occur. The important thing will be the ability to correctly time the price action of individual issues and to buy them durmg such periods of market weakness. In the present stage of the long term pattern, the market averages appear to act only as a background to individual issues. Favorably situated issues move into new high territory when the background is favorable, and issues in an earlier phase of development enlarge their potential periods of general market weakness. It is interesting to note that many of th t c . ffie Dow-Jones Indus- trial average that have shown the best price action rtheJ\p e been the stocks that reached their previous highs a long time before the ysler, for example, reached its previous high of 50 (adjusted) reached its previous high in 1957, and Gene ck i5.ndardOilofNeWJerSey ors ' 59. These issues have been in aC,curnula.tiQnphasesJor, of There are ma;;y i'ssues of;- I' qwilitithat appearto be- forming broad – accumulation patterns. Beaun C often been mentioned in these letters. Up until now the stock has yarns and staples ts rise. The company is a leading producer of rayon nce on tire cord resulted in an erratic earnings pat- tern over recent ye it a of 3. 12 per share in reported earnings for 1959, and a low of 1. 60 in 1960. he is now selling at 13 times the last twelve months earnings of 2.00 and yields 4. n the l. 20 dividend. The company IS attempting to concentrate to a greater extent in fiber manufacture. Tire yarns 'now account for only 20 of sales with textile yarns 35, and fabrics 45. Beaunit has started work on a new plant to produce high wet modulous modified rayon staple fiber. This type of rayon is in short supply because, blended with cotton, it enhances the desirable qualities of pure fine cotton. This and other developments could result in a more stable growth pattern in the hitherto erratic earnings. The stock has done little marketwise in recent years. Since 1959, it has held in a trading range between a high of 30 in 1959 and a low of 16 in 1960. On the favorable side, the 1962 low of 18 held above the 1960 10w.Beauni has built up a sizable potential base pattern and, from a technical viewpoint, ability to brea out on the upside of this long trading range would be a constructive development. The stock should be bought during periods of market correction for long term accounts interested mainly in capital appreciation. We have noted the improving action of issues in the paper group. Crown Zellerbach 53 1/8, Great Northern Paper 48 1/4 and Union Bag-Camp (40) are part of our recom- mended list. On market weakness to the 30-32 level, we would add Container Corp.(33 3/8) to the list. It is the largest unit in the paperboard-container industry and should be a prime beneficiary of the improving pattern in the industry. Technically, it has shown extremely favorable action and has broken out of a long trading area in which it has held since 1958. Good downside support should be found around the 30 level. Dow-Jones Ind. 745.06 Dow-Jones Rails 170,93 EDMUND W. TABELL WALSTON & CO. INC. ThIS rnnrketlettcr h. not and under no Clrcumbtance;; 15 to he cClnsh ued as nn offer to ..ell or II suitCltnilon tn bll' an serlllltlc., I erell cd 1,) hel em The Infm mnbon ('flntained herem Ib nut j,!unranteed a; to nccurncy or nnd the thereuf I' nut. nnll 1I11,1(,1 IlO ('II e IS te) he tiM nt. n twn by & Co. Inc All 'If oplnmn nee 1I1IhJecl to chnngc wlthut notwe & eu. IIIL. IIlHI OffICCl'll. Ducctl …. Sto('J..h()ldcIII unci Employees ther('Of, Illucha'le, sell nnrl mny hll\e an III the me1ltl'I1('(1 heleltl Thlt, malJ..et let tel IS mtcndc,l and Ilretellted merely 1\ l!enernL mfrmnl cnmmentrllY on rin)' to Iny market nc…. b and not as n complete nnui)''lh AcllitlnllllllfulmatHm …. Ith ICle('t to IIny '('('I1lt\('S 11'ruled to hl'lem \\111 hI' ….. fuenlshed I.UJOIl rellucst \\-., 11)1