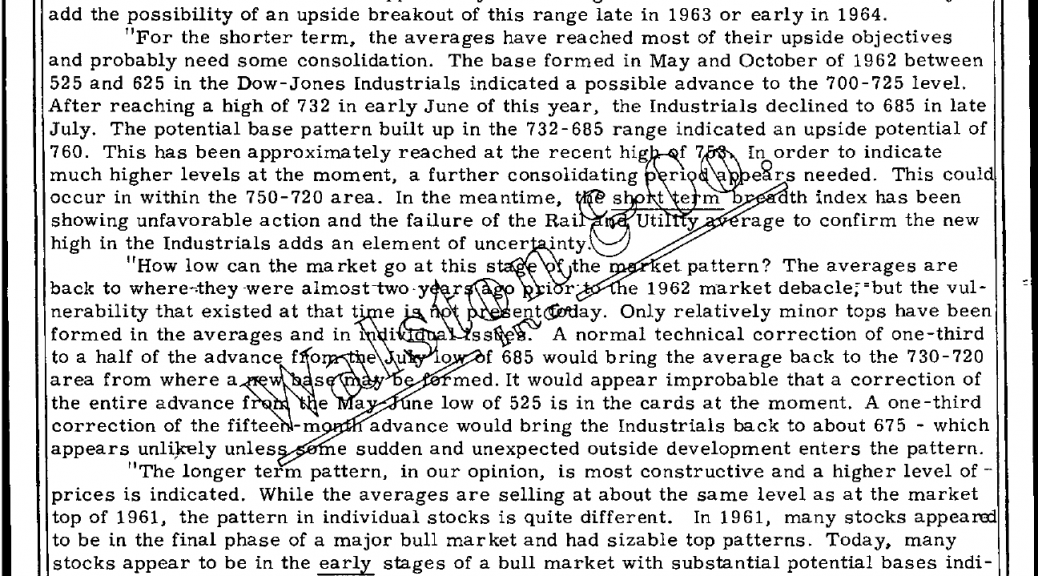 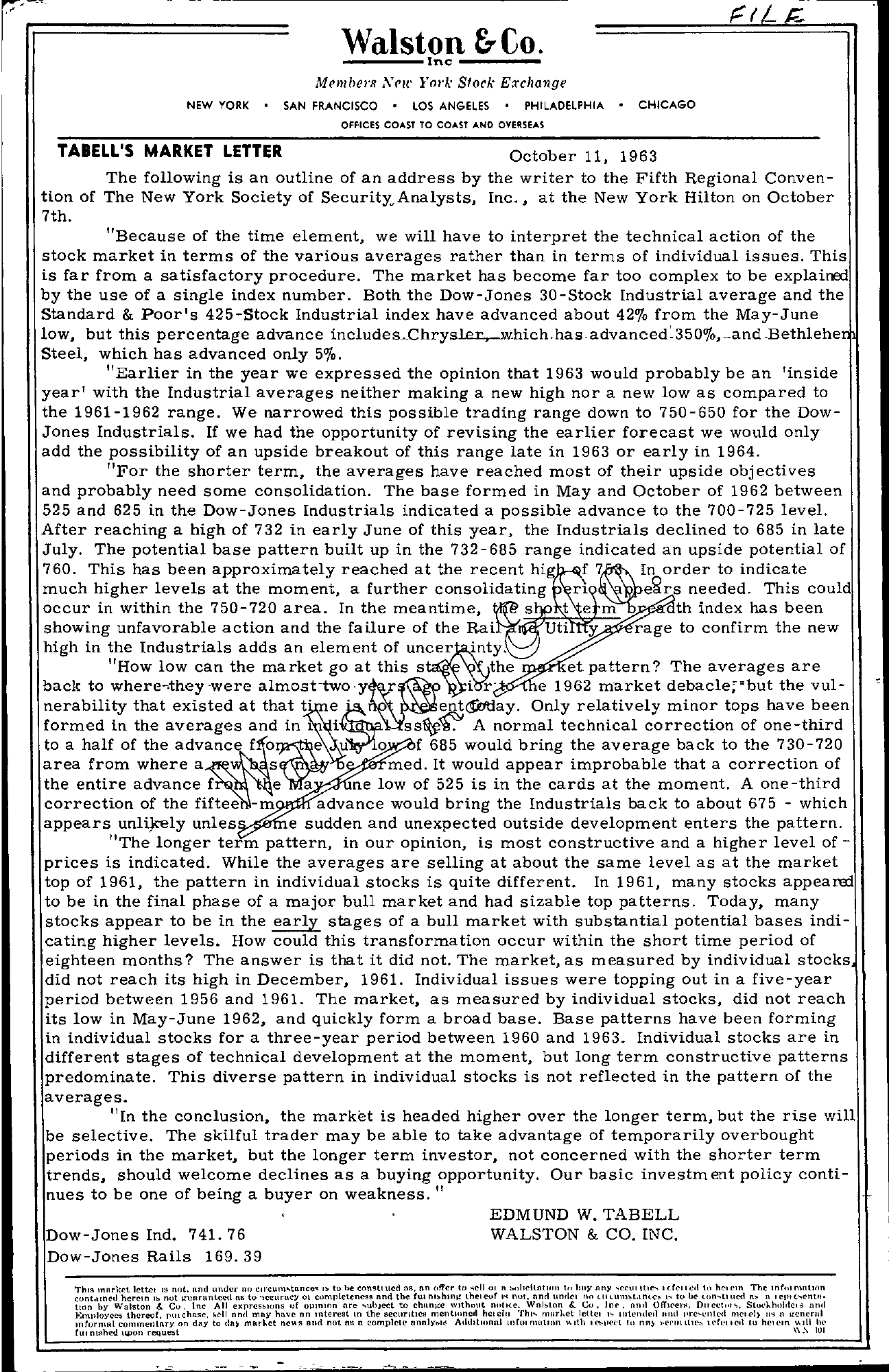 Walston &CO. —-Inc —- Membel'R .Yell' YO/'k' Stork Exchange NEW YORK SAN FRANCISCO LOS ANGELES PHILADELPHIA CHICAGO OFFICES COAST TO COAST AND OVERSEAS TABELL'S MARKET LETTER October 11, 1963 The following is an outline of an address by the writer to the Fifth Regional Conven- tion of The New York Society of Security. Analysts, Inc., at the New York Hilton on October 7th. Because of the time element, we will have to interpret the technical action of the stock market in terms of the various averages rather than in terms of individual issues. This is far from a satisfactory procedure. The market has become far too complex to be explainErl by the use of a single index number. Both the Dow-Jones 30-Stock Industrial average and the Standard & Poor's 425-Stock Industrial index have advanced about 42 from the May-June low, but this percentage advance .Bethlehe Steel, which has advanced only 5. Earlier in the year we expressed the opinion that 1963 would probably be an 'inside year' with the Industrial averages neither making a new high nor a new low as compared to the 1961-1962 range. We narrowed this possible trading range down to 750-650 for the Dow- Jones Industrials. If we had the opportunity of revising the earlier forecast we would only add the possibility of an upside breakout of this range late in 1963 or early in 1964. For the shorter term, the averages have reached most of their upside objectives and probably need some consolidation. The base formed in May and October of 1962 between 525 and 625 in the Dow-Jones Industrials indicated a possible advance to the 700-725 level. After reaching a high of 732 in early June of this year, the Industrials declined to 685 in late July. The potential base pattern built up in the 732-685 range indicated an upside potential of 760. This has been approximately reached at the recent hig f order to indicate much higher levels at the moment, a further consolidating rl needed, This could occur in within the 750-720 area. In the meantime, t em th index has been showing unfavorable action and the failure of the Rai Uti rage to confirm the new high in the Industrials adds an element of How low can the market go at this s inty. the et pattern The averages are back to where-,they were almost.twO'ym i r' e 1962 market the vul- nerability that existed at ei' formed in the averages and in r i Only relatively minor tops have been A normal technical correction of one-third to a half of the advance f u 0 f 685 would bring the average back to the 730-720 area from where a s med. It would appear improbable that a correction of the entire advance f ea ne low of 525 is in the cards at the moment. A one-third advance would bring the Industrials hack to about 675 – which appears unlirely unles e sudden and unexpected outside development enters the pattern. The longer term pattern, in our opinion, is most constructive and a higher level of prices is indicated. While the averages are selling at about the same level as at the market top of 1961, the pattern in individual stocks is quite different. In 1961, many stocks appearel to be in the final phase of a major bull market and had sizable top patterns. Today, many stocks appear to be in the early stages of a bull market with substantial potential bases indi- cating higher levels. How could this transformation occur within the short time period of eighteen months The answer is that it did not. The market, as measured by individual stocks did not reach its high in December, 1961. Individual issues were topping out in a five-year period between 1956 and 1961. The market, as measured by individual stocks, did not reach its low in May-June 1962, and quickly form a broad base. Base patterns have been forming in individual stocks for a three-year period between 1960 and 1963. Individual stocks are in different stages of technical development at the moment, but long term constructive patterns predominate. This diverse pattern in individual stocks is not reflected in the pattern of the averages. In the conclusion, the market is headed higher over the longer term, but the rise will be selective. The skilful trader may be able to take advantage of temporarily overbought periods in the market, but the longer term investor, not concerned with the shorter term trends, should welcome declines as a buying opportunity. Our basic investment policy conti- nues to be one of being a buyer on weakness. EDMUND W. TABELL Dow-Jones Ind. 741. 76 WALSTON & CO. INC. Dow-Jones Rails 169.39 ThIS market Jette! IS not. nnd under nn tu he const1 lied us, nn uffer to ..ell 01 1\ bohcitntHln tIl lollY nny ,ile I dell ttl h(,ll'1J\ The Infl mallon ('unt.llned herein II nut I!unranlced ns to 'l('curucy 01 completeness nnd the CUI nl.bllll! tbelevf ,.. nul. nm! 1In11('1 un 1 to I.oe llm..t, \led n, 1'111 t …entn- t!Un by Walston &. Cu Inc All f oll1nHn nre ..uhJect to chull)!e wlthut Iln(l('. Woh,(cn &. CII, Jill', 1'l1111 Offlcel… , lllltl Employees thereof, nnd mllY hu.\'e an Interest til the mentlOIleil hetel Thl ml1rhet Jettel I meleh 1l'l11 I!cncrlll mformlli commentary on day to market ne…. s Ilnd not as a complete annh'''I' Adthhnnni mfOimlltlnn Ith I(o.pe('t 10 no) ll'fell(!i to helem \\ill he fUIIlIhcd \1,Pon request \\.\ WI