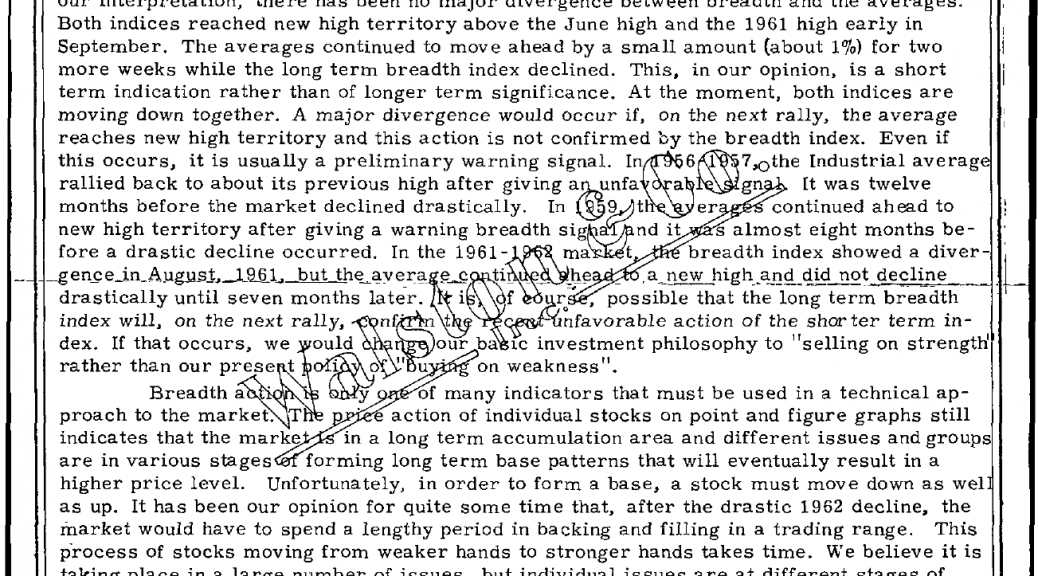 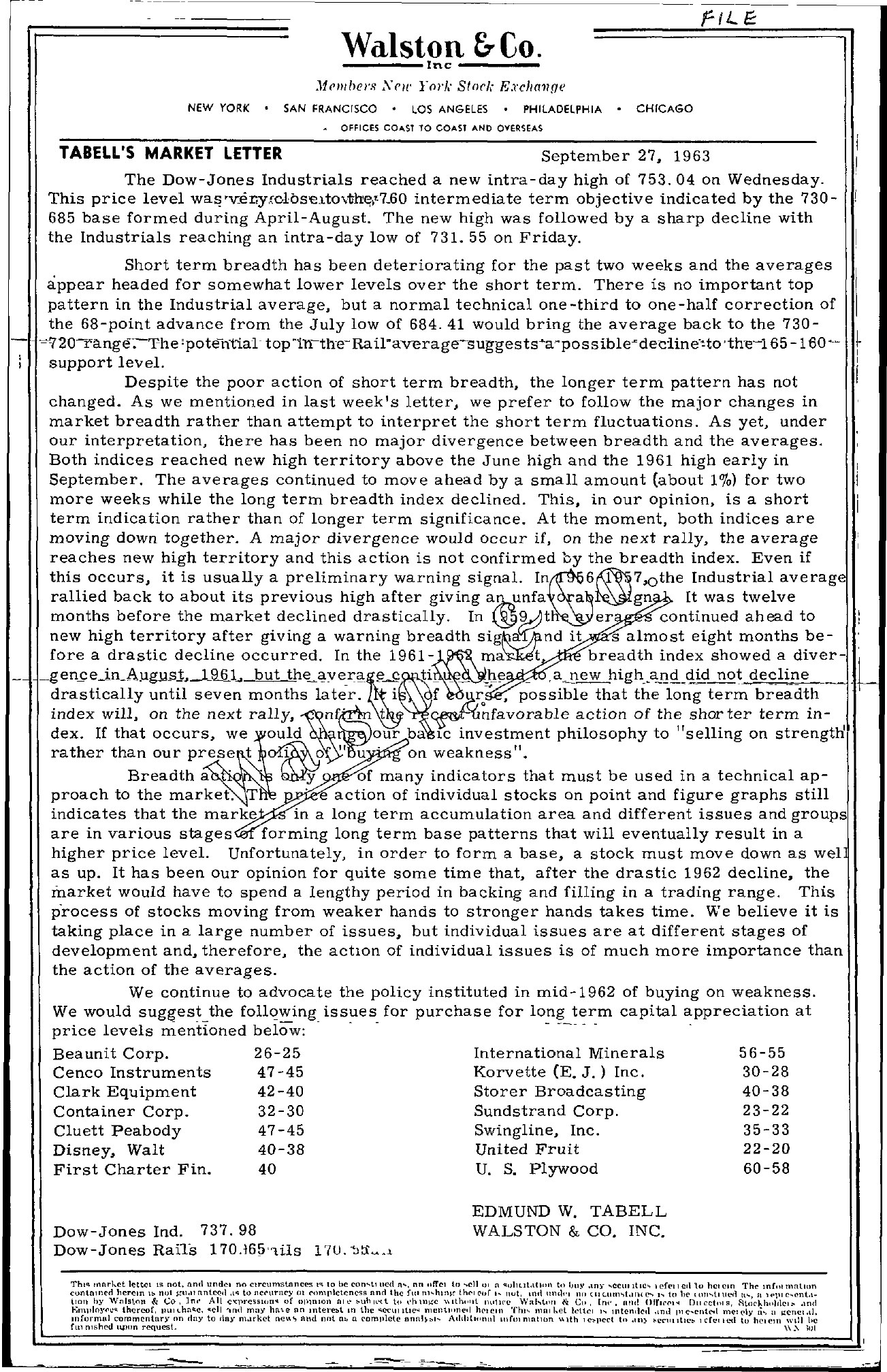 Walston &- Co. —–Inc —– femhers Xell' York Stnck E.l'cha11ye flL IE NEW YORK SAN FRANCISCO LOS ANGELES PHILADELPHIA CHICAGO OFFICES CQA,ST TO COAST ANO OVERSEAS TABEll'S MARKET lETTER September 27, 1963 The Dow-Jones Industrials reached a new intra-day high of 753.04 on Wednesday. This price level intermediate term objective indicated by the 730- 685 base formed during April-August. The new high was followed by a sharp decline with the Industrials reaching an intra-day low of 731. 55 on Friday. Short term breadth has been deteriorating for the past two weeks and the averages appear headed for somewhat lower levels over the short term. There is no important top pattern in the Industrial average, but a normal technical one-third to one-half correction of the 68-point advance from the July low of 684.41 would bring the average back to the 730- t'720-range-'I'he 'pote-ntial- top In-the-Ra ibledeciine-'to the-165 -1'60 .- support level. Despite the poor action of short term breadth, the longer term pattern has not I i changed. As we mentioned in last week's letter, we prefer to follow the major changes in market breadth rather than attempt to interpret the short term fluctuations. As yet, under our interpretation, there has been no major divergence between breadth and the averages. Both indices reached new high territory above the June high and the 1961 high early in September. The averages continued to move ahead by a small amount (about 10/0) for two more weeks while the long term breadth index declined. This, in our opinion, is a short term indication rather than of longer term significance. At the moment, both indices are moving down together. A major divergence would occur if, on the next rally, the average reaches new high territory and this action is not confirmed by the breadth index. Even if this occurs, it is usually a preliminary warning signal. rallied back to about its previous high after giving a Industrial average It was twelve months before the market declined drastically. In er continued ahead to new high territory after giving a warning breadth sigi\!aGrAlnd it s almost eight months be- Lfore a drastic decline occurred. In the breadth index showed a diver- . . .a..new high.a'!Q..c!i9 not decline . drastically until seven months later. i f ).l!!.-, possible that the long term breadth I index will, on the next t action of the shorter term in- dex. If that occurs, we ould our ba lC investment philosophy to selling on strength' rather than our prese t otJA)\o u' on weakness. Breadth a ' . l b'hPy of many indicators that must be used in a technical ap- proach to the market. T indicates that the marke e action of individual stocks on point and figure graphs still in a long term accumulation area and different issues and groups are in various stages forming long term base patterns that will eventually result in a higher price level. Unfortunately, in order to form a base, a stock must move down as weI as up. It has been our opinion for quite some time that, after the drastic 1962 decline, the market would have to spend a lengthy period in backing and filling in a trading range. This p'rocess of stocks moving from weaker hands to stronger hands takes time. We believe it is taking place in a large number of issues, but individual issues are at different stages of development and, therefore, the actlOn of individual issues is of much more importance than the action of the averages. We continue to advocate the policy instituted in mid-1962 of buying on weakness. We would suggest the following issues for purchase for long term capital appreciation at price levels m.entIoned below – . . . .-.. . . Beaunit Corp. Cenco Instruments Clark Equipment Container Corp. Cluett Peabody Disney, Walt First Charter Fin. 26-25 47-45 42-40 32-30 47-45 40-38 40 International Minerals Korvette (E. J.) Inc. Storer Broadcasting Sundstrand Corp. Swingline, Inc. United Fruit U. S. Plywood 56-55 30-28 40-38 23-22 35-33 22-20 60-58 Dow-Jones Ind. 737. 98 Dow-Jones Rails 170.165lils l'IU. -'L.i EDMUND W. TABELL WALSTON & CO. INC. n\nr\et Il!tWI IS not. and undcl no ClrCl1mstnnc('S 1; to be con.,tll1c(\ no., nn ..tre! to …ell UI n ;Uhtlt.ltlU to buy ,InY ,CCUlltlC, I efl'll 1',111 hel ('In The mfl111atltln 'untmllcfl lereln lb nut gl1,nantc(,j tOl1c('nrucy 01 ('ompleteness find the the-I('ur h nul, lU.1 un.lt'l nn (II UI11't,111I C-. 1-. to hc 'UII.,tllll.. I1 11 lle.,ent.t. lIOn hy 'nlston & Co, In!' All of OillnIOn lllL' bulll'lt to \\lth,,l l1lIl'C V.'uhtn &; ClI, Irw, und Dllcctnls, Rtl;(')hohlclb l!HI …c' thl.'rcof, llUILhn'e, clI 'lnl\ mny hn\(' nn In thc mcntloned h,ICIIl I11nl)e1 lettel lIItell,I('.i ,inti m('lcly Ii… n 1!('lIct,d, mformlll commcntury on flny to rlny nlJ.rket ne nlld nnt nb 0. completc Addltlnnl ItlfmmnllOn ith I('.Jlccl In ,til) ICfetled to hC1CItl wll be fUI Illsh('d u,pnn request.. \\ .'. ,1)1 .-