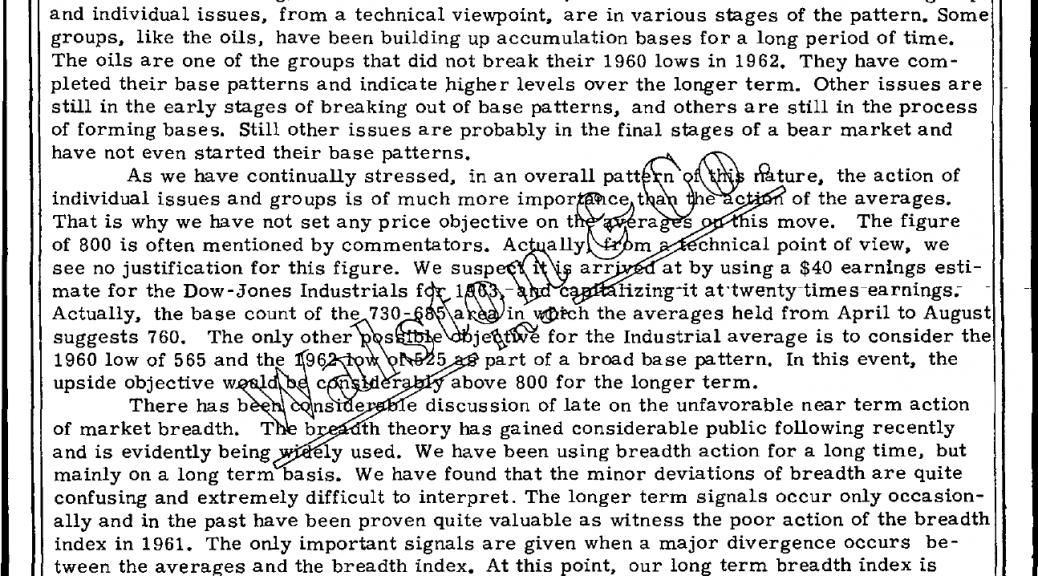 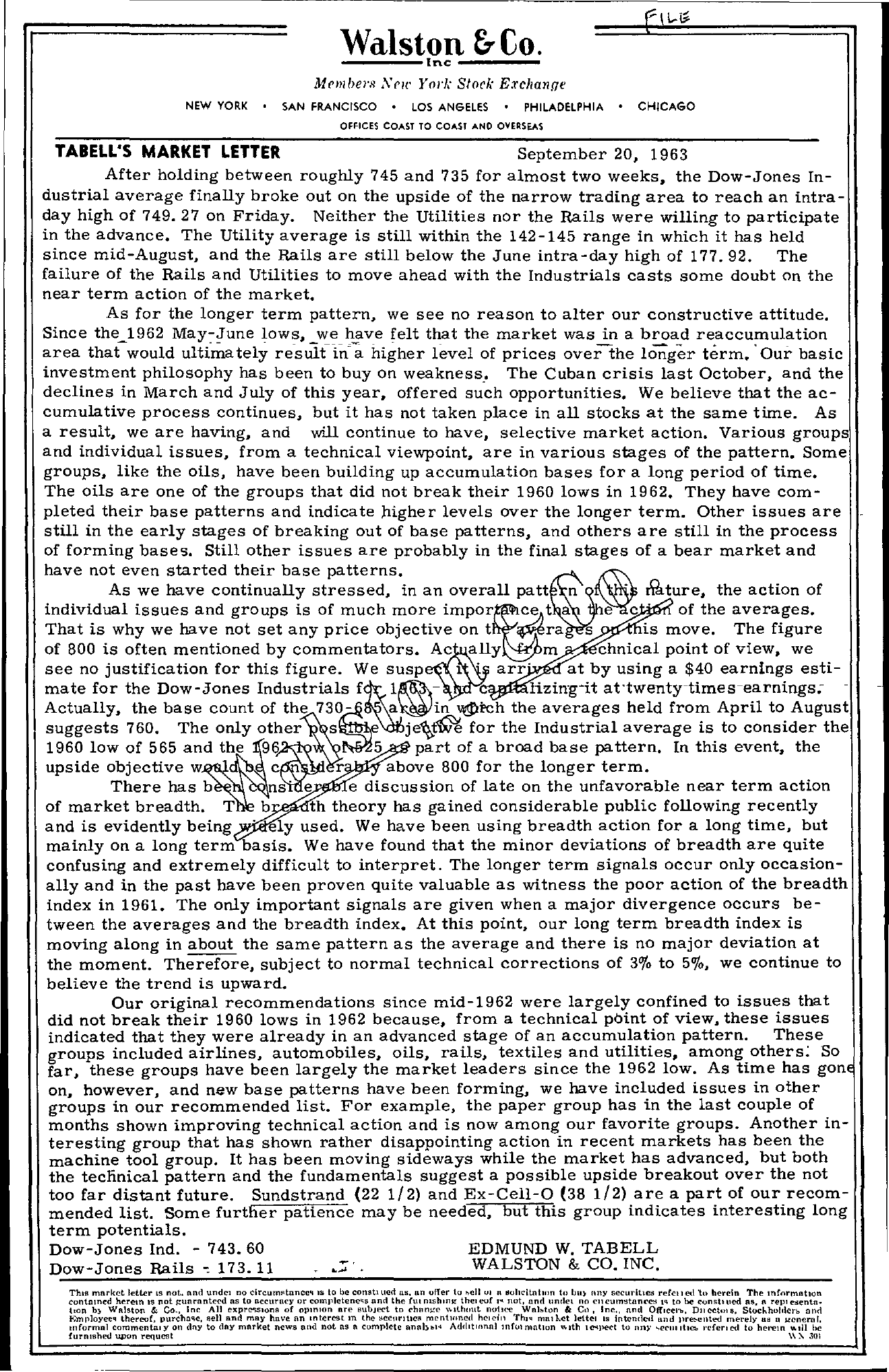 Walston &- Co. —–Inc —– Mrill !lei',' S rH' Y ol'k Siock E.TChange NEW YORK SAN FRANCISCO LOS ANGELES PHILADELPHIA CHICAGO OFFICES COAST TO COAST AND OVERSEAS TABELL'S MARKET LETTER September 20, 1963 After holding between roughly 745 and 735 for almost two weeks, the Dow-Jones In- dustrial average finally broke out on the upside of the narrow trading area to reach an intra- day high of 749. 27 on Friday. Neither the Utilities nor the Rails were willing to participate in the advance. The Utility average is still within the 142-145 range in which it has held since mid-August, and the Rails are still below the June intra-day high of 177.92. The failure of the Rails and Utilities to move ahead with the Industrials casts some doubt on the near term action of the market. As for the longer term pattern, we see no reason to alter our constructive attitude. Since the 1962 May-June lows, we have felt that the market was in a broad reaccumulation area tharwould ultffia tely resUIflril. higher level of prices overthe longer term. 'Our basic investment philosophy has been to buy on weakness. The Cuban crisis last October, and the declines in March and July of this year, offered such opportunities. We believe that the accumulative process continues, but it has not taken place in all stocks at the same time. As a result, we are having, and will continue to have, selective market action. Various groups and individual issues, from a technical viewpoint, are in various stages of the pattern. Some groups, like the oils, have been building up accumulation bases for a long period of time. The oils are one of the groups that did not break their 1960 lows in 1962. They have completed their base patterns and indicate l1igher levels over the longer term. Other issues are still in the early stages of breaking out of base patterns, and others are still in the process of forming bases. Still other issues are probably in the final stages of a bear market and have not even started their base patterns. As we have continually stressed, in an overall patt n . rtiture, the action of individual issues and groups is of much more That is why we have not set any price objective on t t a e c' of the averages. s is move. The figure of 800 is often mentioned by commentators. see no justification for this figue. We susp mate for the Dow-Jones Industnals ally m chnical point of view, we l ' arr', , at,by using a earning,s esti- c hzmg-lt at'twenty-tlmes-earmngs; – Actually, the base count of 730; suggests 760. The only other s the averages held from April to August for the Industrial average is to consider the 1960 low of 565 upside objective w There has b c ns' e 5 part of a broad base pattern. In this event, the r above 800 for the longer term. e discussion of late on the unfavorable near term action of market breadth. T b th theory has gained considerable public following recently and is evidently being , ly used. We have been using breadth action for a long time, but mainly on a long We have found that the minor deviations of breadth are quite confusing and extremely difficult to interpret, The longer term signals occur only occasion- ally and in the past have been proven quite valuable as witness the poor action of the breadth index in 1961. The only important signals are given when a major divergence occurs between the averages and the breadth index. At this point, our long term breadth index is moving along in about the same pattern as the average and there is no major deviation at the moment. Therefore, subject to normal technical corrections of 30/0 to 50/0, we continue to believe the trend is upward. Our original recommendations since mid-1962 were largely confined to issues that did not break their 1960 lows in 1962 because, from a technical point of view, these issues indicated that they were already in an advanced stage of an accumulation pattern. These groups included airlines, automobiles, oils, rails, textiles and utilities, among others; So far, these groups have been largely the market leaders since the 1962 low. As time has gone on, however, and new base patterns have been forming, we have included issues in other groups in our recommended list. For example, the paper group has in the last couple of months shown improving technical action and is now among our favorite groups. Another in- teresting group that has shown rather disappointing action in recent markets has been the machine tool group. It has been moving sideways while the market has advanced, but both the teclinical pattern and the fundamentals suggest a possible upside breakout over the not too far distant future. Sundstrand (22 1/2) and Ex-Cell-O (38 1/2) are a part of our recom- mended list. Some further patience may be needed, but this group indicates interesting long term potentials. Dow-Jones Ind. – 743.60 Dow-Jones Rails 173.11 EDMUND W. TABELL WALSTON & CO. INC. ThiS market letter IS not. and undCI no elreumlltnnccq IS to be const! l1ed as, nn offer tu ..ell!)) II Hohdtnh,, tn btl) IIny securihcli reCel1 cd 'to herein The Information contained herein IS not gunrnntcN as to nCCl1rncy or coml'leteneqs and the (UI nwhllll! thcleuf I not, and Ilmlet no CllCUlmltancC'! 1'1 to be constilled as, tI relll escntll hon b) Walston & Co., Inc All elCpreslons of OpIniOn are BubJect to ('hun)!c \qthullt notl('(' Walbtlln ell, Inc nnel 01(1('('1'1., DIICCt01S. Stod.hoillcrb IIno. thereof, sell and may hllve an Interest m the !lecuntlCs mcntmncd hCleill rnnlket lettel IS jlltemlctl nnd llre!cnted merely aB II J,lenerllt. mformal commentnlY on day to day market news and nol as a cumplete AddltUlnlll miUlmatlOn 'Ith 1('I1)('('t to lin)' ..erUllhe. I'cferlcd to hCl'eln \\111 he furmshed u,pon request \\-.. 301